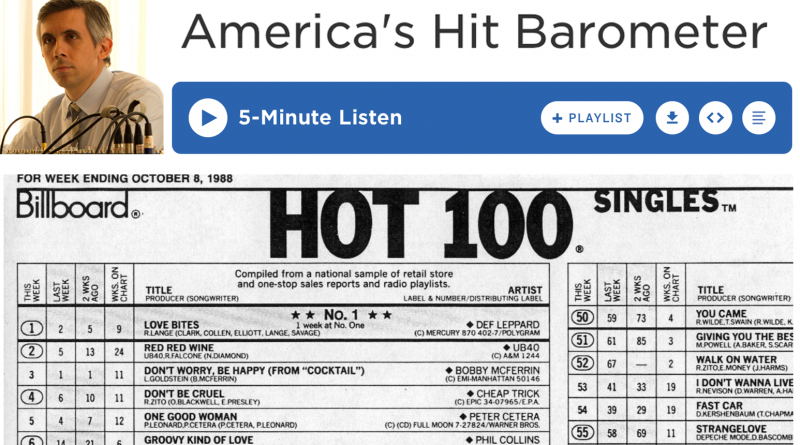 Listen at the audio link to Chris Molanphy and NPR’s Audie Cornish talk on All Things Considered about the history of Billboard‘s Hot 100 chart.

Hear that? On the radio? That slick, dreamy crooner dude, singing about how he’s going out of his mind over that girl? Well, she’s an animal — baby, it’s in her nature. He used to play around with hearts that hastened at his call. But when he met that little girl, he knew that he would fall.

Wait a sec … what song is this? Which dreamy dude is this? What year is this?

Perhaps it’s the first week of August, 1958, when the top song in America was Ricky Nelson’s “Poor Little Fool” — the first No. 1 song ever on the Billboard Hot 100. The week Billboard launched what would become the premier singles chart in America, the list was led by the smooth-as-milk Nelson, acting the part of a player who’d met his match—bewitched by a woman who, it turns out, is even faster than he is.

Fifty-five years later, to the week, we find the Hot 100 topped by “Blurred Lines,” a ditty from the smooth-as-milk Robin Thicke. It’s about a player who’s … bewitched by a woman who’s faster than he is.

So, yeah, gender politics in pop music have scarcely evolved in a half-century—plus ça change and all that. (Trust: 28-year-old Ricky Nelson had swag. If he’d known in 1958 what a music video was, he’d have shot one with ladies in various states of undress, too.)

The better question is this: How is it that, half a century later, we still follow a chart called the Hot 100 to measure which songs are dominating our earbuds, our streets, our beaches, our dancefloors, our American lives? We don’t listen to transistor radios anymore, or buy seven-inch 45-RPM vinyl (not in quantity, anyway). Why is this chart still around?

The Hot 100 was designed to adapt. It’s a voracious creature, built to absorb whatever medium is delivering music to the masses at any given time. It’s not perfect — any chart where Bob Dylan, Bruce Springsteen and Missy Elliott peak only at No. 2 can’t be — but this chart, designed for the music business and followed by pop nerds like me worldwide, is still the best benchmark we have to measure the bigness of hits.