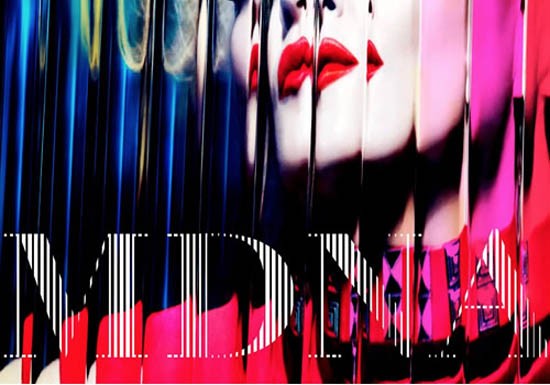 Whatever you thought of her performance at this year’s Super Bowl, Madonna’s halftime appearance had the desired effect: It drummed up awareness for her first album in four years, the longest recording gap of her career.

When the Billboard 200 album chart is tallied in the middle of this week, Madge’s new disc MDNA is expected to dominate handily, with anticipated first-week sales of at least 300,000 copies. That tally would put MDNA solidly in the middle of the pack of Madonna studio-album debuts since the turn of the millennium—ranging from a low of 241,000 copies for 2003’s American Life to a high of 420,000 for 2000’s Music. All of these albums debuted atop the album chart, and MDNA will be her fifth consecutive No. 1 studio album, after Music, American Life, Confessions on a Dance Floor(2005) and Hard Candy (2008). That streak outdoes her previous three-album run of chart-toppers, Like a Virgin, True Blue and Like a Prayer, notched in her ’80s heyday.

The debut of MDNA will also mean the album chart and the Hot 100 are simultaneously topped by recordings boosted by the 2012 Super Bowl. “We Are Young” by fun., heading toward its fifth week as Billboard‘s No. 1 song, hurtled up the chart in February after its appearance in a Chevy commercial that debuted during the game. Never, ever doubt the promotional prowess of America’s national consumerist holiday.

You might have expected the NFL’s selection of Madonna as this year’s halftime performer to draw scorn from the rock fans she’s contended with for most of her career. There was some grumbling from the usual corners: KISS mouthpiece and former halftime performer Gene Simmons reacted to the announcement with predictably retrograde words; a Calgary radio station went into the big game with an “Anyone But Madonna Classic Rock Weekend” promotion.

But even as the postgame reviews came in mixed—some sniping about Madge’s lip syncing and tentative dance moves, plus excess froth over guest M.I.A.’s middle digit—what was remarkable was how little the commentariat regarded Madonna as a dance-pop interloper. (Following up last year’s halftime show by the Black Eyed Peas, a decidedly un-rock act, probably helped her.) Even without the axe-wielding bona fides of a Townshend or a McCartney or a Rogers-Nelson, few observers felt Madge was undeserving of the big game.

Such tacit acceptance was unthinkable a quarter-century ago, when Madonna was laying siege upon the Billboard charts and representing everything that was disrespectful and un-rock about popular music. Even back then, Ms. Ciccone was a strong concert draw, terrible vocals and all (from Virgin Tour ’85 to Super Bowl ’12, Madge’s critics have browbeat her both for singing live and for not singing live).

But for the last decade-plus, Madge has been fully established as a top-drawer touring act, commanding Stones-level ticket prices and U2-size grosses. Like those rockers, Madonna continues to record heavily hyped new albums here and there, but she profits most from the nostalgia business and the ticket sales it generates.

So can we finally, once and for all, call Madonna a classic rocker? Whatever you think of the “rock” status of her music—which has only gone deeper into electronic dance tropes since Ray of Light 14 years ago—a careful study of the Queen of Pop’s Billboardperformance confirms that she doesn’t really chart like a pop star anymore.

Madonna feat. Nicki Minaj and M.I.A., “Give Me All Your Luvin’”

However well MDNA is debuting, it’s not being helped much by its first single. The Nicki Minaj and M.I.A.-backed “Give Me All Your Luvin’” has already dropped off the Hot 100 after a quick burst of post-Bowl digital sales. In February, the ersatz cheerleader chant debuted at a solid No. 13, then sneaked into the Top 10 the following week, at No. 10, before tumbling off the chart less than a month later.

That brief peak saved Madge from the ignominy of missing the winners’ circle with an album-leading single. That’s only happened three times in her estimable Hot 100 career—and there’s a face-saving asterisk on each of them.

Her 1983 debut Madonna needed four singles before “Borderline” finally cracked the Top 10 in 1984. That’s hardly an embarrassment, considering she was a new artist—it’s not like predecessors “Everybody,” “Burning Up,” or the Top 20 “Holiday” are considered duds. In 1996, the Evita soundtrack led off with the Oscar-winning, snoozy Tim Rice-Andrew Lloyd Webber ballad “You Must Love Me,” which stalled at No. 18. As a soundtrack album, Evita must be graded on a curve, and the disc redeemed itself one single later when a 1997 dance remix of “Don’t Cry for Me Argentina” made No. 8. Finally, 2003’s American Life generated the worst-performing grab bag of singles of Madonna’s career, as the title track peaked at No. 37 and nothing else cracked the Top 40. Even here, if one is generous, Madge gets a pass since the James Bond soundtrack single “Die Another Day” preceded American Life by just a few months, made it to No. 8 and was included on the disc.

What makes “Give Me All Your Luvin’” weaker than any of the above album-leading singles is longevity, or the lack thereof. At five weeks, “Give Me All Your Luvin’” wasn’t just Madonna’s shortest-charting leadoff single; it’s her shortest-charting Top 40 hit period. Only three other Madonna singles have spent less time on the full chart (“Nothing Really Matters,” No. 93 in 1999; “Give It 2 Me,” No. 57 in 2008; and “Celebration,” No. 71 in 2009), and all were club-directed promotional tracks not meant for radio. Considering “Luvin’” was an album-leading single and—very briefly—a Top 10 hit, five weeks is a downright pitiful Hot 100 run.

The hard truth is, for an artist who once owned a deed to the Hot 100 and is still rightly considered a major pop star, Madonna has been a fairly weak performer on the premier U.S. song chart for about a decade. Her 12th and final career No. 1 hit was “Music” in the fall of 2000.

All five of these post-2000 Top 10 hits sold well to Madonna’s ample, devoted fanbase; three of the five (“Tell,” “Hung,” “Minutes”) were certified gold, either as physical singles or digitally. But all five did less well on the radio—only “Don’t Tell Me” got as high as 10th place on Billboard‘s Radio Songs list, the airplay component of the Hot 100. Put another way, since early 2001, Madonna hasn’t had a top 10 radio hit, which shows her reach as an omnipresent day-to-day pop star has been waning for some time.

And yet, this same 12-year period has seen Madonna score her most consistent streak of album-chart performance ever: four studio albums, four chart-toppers, with a fifth on the way. Of course, Madge in middle age doesn’t shift the raw tonnage of such ’80s classics as the diamond-certified Like a Virgin or the septuple-platinum True Blue. But considering how weak her post-2000 singles have been, her 21st-century albums have rode the chart for notably long periods. Music was her last out-and-out blockbuster, riding the Billboard 200 for just over a year (55 weeks) and going triple-platinum during the record industry’s pre-iTunes peak. After the short-lived dud American Life(a mere 14 weeks on the Billboard 200), Madonna’s next two albums surfed the chart more than half a year each: 37 weeks for Confessions on a Dance Floor and 30 weeks for Hard Candy.

You know who else does well on the album chart no matter how their singles perform at hit radio? Rock acts.

Of this list of frequent album penthouse-dwellers, only four acts—Disturbed, Linkin Park, Matthews and Springsteen—have scored fewer than four Top 10 songs during the same period (i.e., a ratio of at least one hit song to one chart-topping album; for the country acts, I’m considering Top 10s on the Hot Country Songs chart, and for R. Kelly I’m counting his Top 10s on Hot R&B/Hip-Hop Songs). If we allow for Top 10 hits on Billboard‘s various Rock Songs charts—which are based on much smaller radio-station pools than Top 40, R&B or country, but hit acts at current rock radio do chart a lot like pop acts—then Disturbed and Linkin Park go away, leaving only middle-aged touring giants Dave and Bruce.

With five Top 10 hits after 2000, Madonna is actually doing a bit better than my low-bar metric of four. The fact that she scores hit singles at all makes her more of a current pop star than Matthews or Springsteen—Bruce hasn’t had a Top 40 hit in that timespan, never mind Top 10. But, even if we ignore chart data, it’s pretty obvious that road-warrior rockers like these dudes are closer to Madonna’s peers than are the current Queens of Pop—even protégée Lady Gaga.

(Last summer, a survey I conducted on the stature of current radio divas left out Madonna, for the simple reason that she hadn’t released any recent music as of mid-2011. Dozens of her fans complained in the article’s comments section, but if I had included Madge, they’d have been even angrier—her modern-day chart data would have put her below even the likes of P!nk or Ke$ha.)

At the risk of irritating fans of the true-bluest rocker of all time, Springsteen might, in fact, be Madonna’s true peer. Part-Italian Americans hailing from blue-collar parts of blue states, he’s got a decade on her, both in lifespan and career—but they spent 1984 and 1985 side-by-side on Top 40 radio, warring for the title of biggest pop star on the planet.

The ’80s in general were good to them: three chart-topping albums for Madge, four for Bruce, and more than a dozen Top 10 hits apiece. But the ’90s found them casting about for direction—other than a pair of blockbuster greatest-hits albums, each spent the decade lukewarm in record stores, though Madonna remained a radio favorite.

Then in the 2000s, even as they became colder than ever on the radio, they each made an unlikely turnaround with record buyers: five No. 1 albums for him (a near-streak, broken only by his 2006 disc We Shall Overcome: The Seeger Sessions, which debuted at No. 3), and four for her, with the fifth in the bag. MDNA will become that fifth chart-topping disc just three weeks after his fifth, Wrecking Ball, topped the Billboard 200. Each artist continues to solidify his or her reputation as a stellar evening’s worth of live entertainment, for which fans are willing to pay top dollar (in thrifty-priced Bruce’s case, on the grey market, much to his chagrin). And you can’t tell me there wouldn’t be any overlap between their respective concert attendees. Finally, both were inducted into the Rock & Roll Hall of Fame in their first respective years of eligibility.

If it sounds like I’m flattering Madonna by comparing her to our denim-clad National Treasure, well, I am—but only because her place in current pop culture is otherwise fairly singular. Name me another pop star with zero rock-radio play who sells albums and concert tickets out of the gate with this kind of regularity (especially with Cher and Tina Turner off the road). Bruce has to compete at the box office with the Stones, U2, Elton John and the Eagles. If you’re planning a night combining both decades of hits and thumping dance beats, Madge pretty much stands alone.

Nearly 30 years after she reclaimed dance music from its post-disco assault by rock fans, this, at last, might be Madonna’s final offensive on rockist values: charting and touring like a rock star, without needing to pick up an axe. Who needs Top 40 radio when you have halftime?