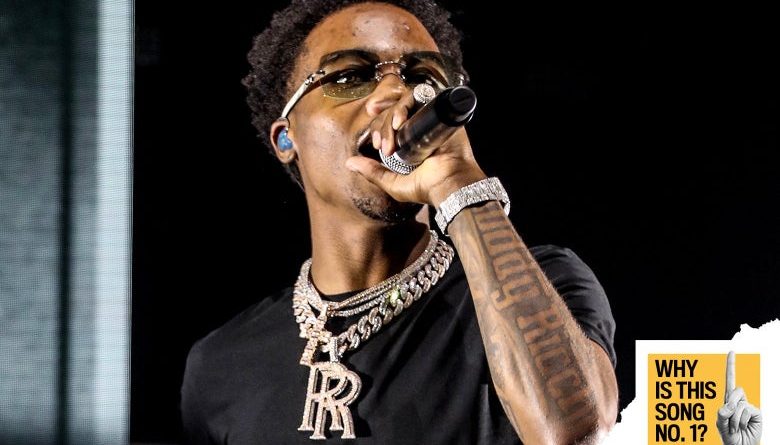 How TikTok—and a squeaky noise—made Roddy Ricch’s “The Box” the biggest song in America.

Back in January 2006, the Billboard Hot 100 was overtaken for one week by a quirky rap track by a group that would never have a major hit again. “Laffy Taffy” was the handiwork of a troupe calling themselves D4L, an acronym for Down for Life. It might still qualify as the most uncluttered No. 1 song in chart history, with a chorus that’s little more than a finger snap, a three-note keyboard hook, and the repeating lyric, “Girl, shake that laffy taffy/ That laffy taffy.” How exactly did D4L’s skeletal hit dethrone a Mariah Carey song? In a word, technology: “Laffy Taffy” was not only a hit 99-cent download at the end of 2005—the first holiday season where Apple’s iTunes Music Store counted for the Hot 100—it was also a hit ringtone. “Laffy Taffy” became the ultimate ringtone rap hit, a song actually helped up the charts by its brutal simplicity. While ringtone purchases themselves didn’t count for the Hot 100, the presence of “Laffy Taffy” on scores of phones made the song ubiquitous, compelling 3 million Americans to buy the full D4L song, which did count.

Fourteen years later, practically to the week, we have a new Hot 100 topper bringing life to the January doldrums. It even defeated a heavily hyped new single by our current ubiquitous R&B-and-pop dominator, Justin Bieber. And this new song’s upset over the Biebs is owed to an even tinier sonic feature than D4L’s chirpy chorus: its opening sound effect. Ringtone rap, meet TikTok meme. Welcome to the 2020s, friends.

This meme-ready smash comes packaged in the charmingly cryptic title “The Box,” and it’s by Roddy Ricch—born Rodrick Wayne Moore Jr. 21 years ago in the rap mecca of Compton, California. Long before his left-field chart topper, Ricch was acclaimed as a rising star in late ’10s West Coast hip-hop, earning praise from such rap elders as Meek Mill and the late Nipsey Hussle. When Please Excuse Me for Being Antisocial, his debut album, topped the Billboard 200 album chart late last year, it was the culmination of years of buzz, mixtapes, and high-profile guest appearances—the relatively traditional route by which rising rappers have made their name for decades. And while “The Box” had a prominent spot on the album—Track 2, just after an opening skit—it was supposed to be an amuse-bouche, not a promotional focus. Three official singles were issued from Please Excuse Me last fall, all of them sporting fairly lush melodic hooks and glossy music videos, and none of them was “The Box.” In fact, “The Box” was so underestimated, as of this writing, it still has no official video beyond a bare-bones clip featuring a slightly animated still of Ricch’s album cover. (You can bet your bottom dollar Atlantic is working on a slick “Box” video as we speak.)

In other words, “The Box” was the digital-era equivalent of a B-side or a deep cut. It might well have languished in obscurity if it hadn’t been for a small flourish Ricch added to the start of the track, the sound of him vocally imitating a windshield wiper—a “EEH ERR, EEH ERR” sound that, an Atlantic Records A&R executive claimed in a tweet, Ricch added to “The Box” at the last minute, after the track was essentially complete. The rest is history. Around mid-December, when Ricch’s album dropped, meme-makers and especially TikTok users keyed into the opening seconds of “The Box”—particularly that squeaky-wheel noise, which, it turns out, is ideal for micro-videos: Is it a pair of hands being squeezed? A mirror being polished? A chair being adjusted by SpongeBob SquarePants? All of that and more.

we made The Box at 6am in NYC after being up all night, you can only imagine my face when roddy already finished the song and said “Wait let me add something” & EHH ERRR 🚪 EHH ERR was born 🤣

To be sure, “The Box” had a whole lot more going for it than its signature squeak. The song also opens with a portentous orchestral crescendo (one Billboard writer compares it to Moby’s Bourne movie perennial “Extreme Ways”) that ramps up excitement for the track even before it has begun. Then, once “The Box” starts in earnest and Ricch begins rapping, he proffers a pileup of quotable lines over an irresistible timpani thump. (The booming backing track is the handiwork of Samuel “30Roc” Gloade, who has previously piloted hits for Cardi B, T-Wayne, and Travis Scott.) It’s not quite the parade of stand-alone genius lines that is Lizzo’s “Truth Hurts,” but as with that sleeper smash, any small piece of it can serve as a synecdoche, standing in for—and approximating the coolness of—the whole.

TikTok video play does not (yet) count for the Hot 100. In fact, coincidentally, while revealing this week’s Hot 100 topper, Billboard also announced it was tightening its policies around what kinds of user-generated videos that feature licensed recordings will count for its “Hot” song charts. (Short version: If a song is incidental to a YouTube clip and not the primary focus of the video, its views may no longer count for the chart. However, song-centric clips will be weighted more heavily than they were before.) The magazine will no doubt keep tweaking the rules for social song sharing as music fandom migrates to a new generation of apps. But this week, it didn’t much matter—and here’s where the “Laffy Taffy” analogy comes in: Just as ringtones had a knock-on effect on more traditional digital sales and radio airplay back in 2005–06, since “The Box” took off on TikTok a month ago, it has sent Spotify and other streaming-music play into the stratosphere.

That streaming dominance is what hoisted “The Box” to the top of the multimetric Hot 100. Billboard reports that Ricch’s track racked up a gobsmacking 68.2 million weekly streams, the highest nonseasonal stream total since Lil Nas X’s almighty “Old Town Road” last summer. (Since then, only Mariah Carey’s seasonal chestnut tallied slightly higher streams during the week of Christmas.) Even downloads, a now-ancient form of digital consumption, were goosed by the song’s viral spread—its buck-a-song sales rose nearly 80 percent last week, lifting the track into the top 10 on Billboard’s Digital Songs chart, a rarity for a viral rap hit nowadays.

Of course, the song that is actually the week’s No. 1 download—but only the No. 2 song on the Hot 100—is the one I thought I’d be writing about for this series this week: “Yummy,” tattooed boy wonder Justin Bieber’s heavily hyped comeback single. A catchy but seemingly predigested bit of radio fodder billed as Justin’s pivot to classic R&B with a bit of pop whipped topping, “Yummy” was set up to debut atop the Hot 100. It’s Bieber’s first lead-artist single since his 2015 album Purpose, which generated the chart-topping troika “What Do You Mean?” “Sorry,” and “Love Yourself.” Bieber manager Scooter Braun, looking for a win both for his top client as well as himself after the Taylor Swift imbroglio, primed the market with a glossy music video and a radio campaign timed to generate maximum exposure. And by most measures, “Yummy” did well: an immediate top 10 radio audience, 71,000 in downloads sold in its first week (about six times “The Box’s” sales), and a second-place ranking on Streaming Songs with 29.3 million streams, fueled in part by that video. But that streaming number was no match for Roddy Ricch’s near-tripling of Bieber’s total, and now that streams make up more than half of the Hot 100’s points, that shortfall proved fatal to “Yummy.” Justin must’ve known streaming was his Achilles’ heel, because in a controversial and ultimately mortifying move, he posted instructions to his rabid fan base—including non-U.S. listeners—on how to set up virtual private networks to play “Yummy” on repeat. (“Don’t mute it!” the Biebs commanded, knowing Spotify only tracks audible plays. “Let it play while you sleep.”) Bieber pulled down the instructions within hours, but not before it was screengrabbed so music news sites could dunk on him all week long.

Perhaps the wittiest dunker was Roddy Ricch himself, who—foreseeing how his unlikely hit was lapping the field and primed to upset Bieber—posted a succinct five-word-and-one-emoji tweet late last week: “stream yummy by justin bieber 💪” (the flexed bicep was a nice touch). This expertly deployed shade foreshadowed Ricch’s win, in a week where “The Box” was already at No. 3 on the chart and rising fast. “The Box’s” ultimate victory is perhaps the biggest David-vs.-Goliath chart story since Lil Nas X held off Taylor Swift’s “ME!” last spring. Now that his song—again, a track with no video, that was never meant to be a single—is on top, Ricch has become cocky enough to start pointing and chuckling at other returning pop stars. His latest tweet invites followers to “stream rare by selena gomez 🔥”—a callout to the new album by Gomez, whose lead single managed to hit No. 1 last fall, ahead of Hurricane Roddy. If it seems churlish for Ricch to take aim at Gomez, keep in mind that “The Box” is so strong it returned Please Excuse Me for Being Antisocial to No. 1 on the album chart, giving him a hammerlock on both flagship Billboard charts, the first act to pull that off since Lady Gaga and Bradley Cooper did it with “Shallow” and the A Star Is Born soundtrack last winter. Ricch is preternaturally confident—in interviews, he claims he’s been expecting superstardom—and you can’t really blame him, given that another single with his vocals, producer Mustard’s “Ballin’,” is just outside the Top 10 and about to join “The Box” in the winner’s circle.

One thing I continue to love about chart following is the capacity for surprise. In 2019, both Billboard and your Slate chart columnist reported a pendulum swing back toward centrist pop—and yet, as 2020 begins, we are reminded that truly quirky hip-hop can still dominate the field. Those who argue that the Music-Industrial Complex turns superstar hits into foregone conclusions haven’t been following the Hot 100 or the Billboard 200 lately, where several seemingly bulletproof acts like Bieber have underperformed, and the audience has greater sway over hit-making than ever before. Sure, sometimes that means they gravitate toward hits designed to be ringtones or, more recently, 15-second video loops. But when the rapper with the biggest song in America couldn’t foresee what song would take him to the top of the charts, it’s a reminder that nobody in this business ever really knows exactly what might squeak through.