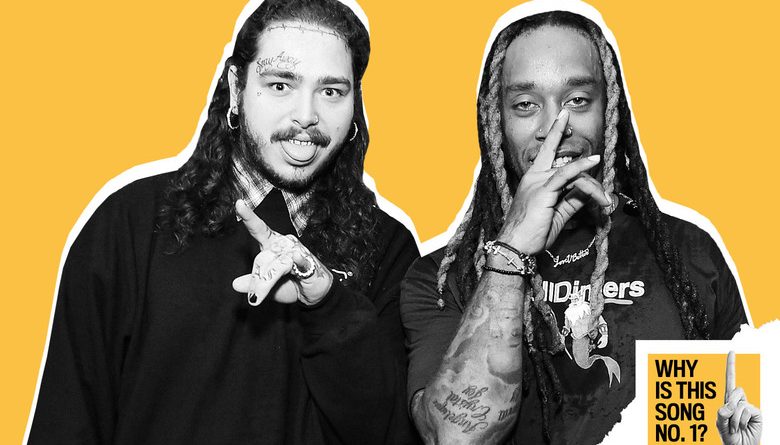 With “Psycho,” the “rapper” behind “Rockstar” confirms he’s this generation’s Everlast.

With sincere apologies to Maya Angelou, I’m starting to think when white “rapper” Post Malone showed us who he was, we should have believed him the first time. I place “rapper” in scare quotes, because Malone has been running away from hip-hop for the duration of his relatively brief career. He’s said he’s “not a rapper” even more often than this guy. The thing is, he’s kind of right. Though the industry, from Billboard to Apple to Spotify, classifies his music as rap, little in Post’s music other than its sluggishly syncopated rhythms or its trap synth hooks owes much to hip-hop: He croons more than he flows. He is essentially a rap-era singer-songwriter, largely devoid of bars and reliant upon infectious, endlessly cycling melodic hooks that make him the pop star for this moment. Two years into this aesthetic experiment, he’s getting rewarded for it, richly and repeatedly.

Those rewards continue this week, with the belated arrival of his single “Psycho” on top of the Hot 100. The song took 15 weeks to hit No. 1, an unusually languid rise to the penthouse by modern standards. America’s latest three chart-toppers—two singles by Drake, and one by Donald Glover’s Childish Gambino alter ego—all debuted at the summit.

Malone’s nearly four-month marathon to the top slot is as lethargic as his song itself. A loping hip-pop joint that rides a singsong hook for all of its four minutes, “Psycho” pulls off a time-honored Hot 100 trick: reheating a prior recipe and ringing the bell again. From the Motown stable rewriting the Jackson 5’s “I Want You Back” as “ABC” in 1970, to LMFAO retooling “Party Rock Anthem” into “Sexy and I Know It” in 2011, rising pop acts do this because it works. Post’s party-down(er) formula dates back to his very first hit, “White Iverson” (No. 14, 2015–16), but it became commercially bulletproof via his first chart-topper “Rockstar,” which, when it led the Hot 100 last fall, I called “a damp, druggy bummer of a club track.” “Psycho” is essentially a more upbeat clone—where the earlier hit was a minor-key meditation on celebrity excess, the newer hit is … a major-key meditation on celebrity excess. Where the prior hit was about aspiring to and “feel[ing] like” a rock star, the lyrics of “Psycho” are about the so-called wages of fame after you’ve arrived, from folks who befriend you for your jewelry to unattractive women who want a sip of your Cristal when you make your $30K club walkthrough. Let’s all pour out a Zima in sympathy for Post.

Malone barely missed a beat between hits. “Rockstar” spent its eighth and final week in the penthouse exactly six months ago and is still in the Top 40. “Psycho” debuted in the chart’s runner-up slot back in early March (behind Drake’s “God’s Plan”), essentially grabbing the baton from “Rockstar” just a week before the earlier hit departed the Top 10 after a solid 24-week run in the winner’s circle. This persistent omnipresence is becoming de rigueur for him. Post’s second album, Beerbongs & Bentleys, not only debuted atop Billboard’s album chart in May, it spent an impressive three weeks there, the longest run of any album since Taylor Swift’s Reputation last fall, and it still has never ranked lower than No. 2. As for “Psycho,” it too has been a long-term performer—after its lofty debut it knocked around the Top 5 for more than three months, waiting out both “God’s Plan” and Drake’s follow-up “Nice for What” and the quick two-week interruption by Gambino’s “This Is America.” In other words, even beyond its somnambulant vibe, “sleeper” is the right way to describe Malone’s latest hit. Billboard reports that it is No. 1 on the Hot 100 this week despite not leading any of the three metrics that make up the chart: streaming, sales, or airplay.

If a song takes an unusually long time to reach the top of the Hot 100, usually airplay is the driver: Radio is notorious for taking longer to catch onto a proven hit than streamers or downloaders do. Sure enough, “Psycho’s” most serious upward momentum this week is on the Radio Songs list, where it garners a radio audience of 98 million. That’s the second largest airplay audience in the country, behind only Zedd’s hybridized EDM-pop smash “The Middle” (a savvily crafted earworm with awesome vocals by country singer Maren Morris that, frankly, should have been No. 1 on the big chart by now—but I digress). In a week where Malone’s streams are down and his sales mediocre, radio was the X-factor that got his languishing hit the last mile.

If this sounds a bit improbable, it should. Pop Songs normally showcases so-called pure pop: your Demi Lovatos, your Charlie Puths, your former members of One Direction—these are the acts that typically lead mainstream Top 40 playlists and, hence, this chart. Last fall, while Malone’s “Rockstar” was tearing up Spotify and crowning the Hot 100 for two months, it wasn’t on top of Pop Songs. That chart was instead led by the likes of “Feel It Still,” “Thunder,” and “Havana.” If a rapper tops the Pop Songs chart, it’s usually in a featured role: The few lead rappers who’ve pulled it off include Macklemore and Ryan Lewis and Wiz Khalifa, on the heavily Puth-supported, more-pop-than-rap monster smash “See You Again.” Last fall, “Rockstar” did get as high as No. 5 on Pop Songs, fairly impressive for a song by two nominal rappers (Malone and supporting artist 21 Savage). How did “Psycho” do so much better at mainstream Top 40 stations? Again, it’s a more upbeat, major-key, summery-sounding record—friendlier for pop audiences, even if it’s not all that different from its predecessor structurally. And by now, Malone is more of a known quantity with listeners than he was last fall.

Or maybe Top 40 radio programmers—who are careful about how much rap they rotate—have figured out something more obvious: Post is a pop star. Last October, in my analysis of Malone’s prior chart-topper, I called him “the Kid Rock of the 2010s,” referring not just to his race and sideways relationship to rap culture but also his pro-gun, quasi-libertarian politics. I stand by that, but in a review of Malone’s latest album, Pitchfork critic Evan Rytlewski does me one better, analogizing Post’s career to that of ’90s white rapper–turned–acoustic emo-bro Everlast—the man who made a decadelong transition from House of Pain’s delirious banger “Jump Around” to his own sad strummer “What It’s Like.”

Nobody mistook “What It’s Like” for hip-hop 20 years ago, even though it was by a former rapper. And yet, Post Malone’s angle is condensing that aesthetic leap down to a bunny hop—singing virtually all the way through his hits, barely bothering with flow—and being called a rapper anyway. In its rundown of “Psycho’s” chart stats, Billboard reports, matter-of-factly: “Rap songs have now led the Hot 100 for a record-extending 20 consecutive weeks, thanks to Drake’s ‘Plan’ and ‘Nice,’ Childish Gambino’s ‘America’ and now ‘Psycho.’ ” I mean, sure, if we think those three artists are all playing the same sport. Drake and Gambino sing on their hits, but they also rap, so credibly the point doesn’t even need to be made. Back in 2009, when Kesha was still Ke$ha and on her first chart-topping single “Tik Tok,” New York Times critic Jon Caramanica made a convincing argument that she was nominally a pop star but actually a rapper. (On later hits, and especially after dropping Dr. Luke and her dollar sign, Kesha moved closer to centrist pop.) When it comes to Post Malone, the converse can just as easily be true. That eighth-place ranking on rap radio says something, but the first-place ranking on Top 40 radio speaks louder.

To be clear: I’m not implying a value judgment or certainly a masculinity litmus test on rap versus pop. Three decades after the crossover of rap to white audiences, Malone’s whiteness confers neither pop status nor guaranteed success. Consider the failed launch a decade ago of Asher Roth, for example, and as for Macklemore, infamously, the dizzying heights he and Ryan Lewis reached in the single year of 2013 were followed by a precipitous fall both with rap true believers and the public. Malone is a success going on three years now because he’s found a combination of badass persona and Trump-era moodiness that suits the current zeitgeist. That, and hooks: Whatever else you can say about it, “Psycho” is effective—mesmerizing and hypnotic in the same way “Rockstar” was.

The problem is more than genre nomenclature, however. It’s that Malone—cornrows, grills and all—has one foot out the door of hip-hop culture. “If you’re looking for lyrics, if you’re looking to cry, if you’re looking to think about life, don’t listen to hip-hop,” saith Post. This, even as he tops the charts with unmistakably pop records that somehow earn rap cred anyway. When Beerbongs & Bentleys came out in April, its album cover struck me as telling. Malone went for a “no cover” aesthetic, the look of a burned CD-R in a beer-tinted slimline jewel case. Like so much in Malone’s nascent career, it’s an idea he didn’t originate: Kanye West did much the same thing five years ago with his intentionally coverless CD Yeezus. It’s also an apt metaphor for the music in Post world: all the shit talk of vintage, pre-MAGA Ye, with none of the omnivorousness or skill that keep us fascinated even when he’s a pompous jerk. That Post Malone jewel case is empty in more ways than one.