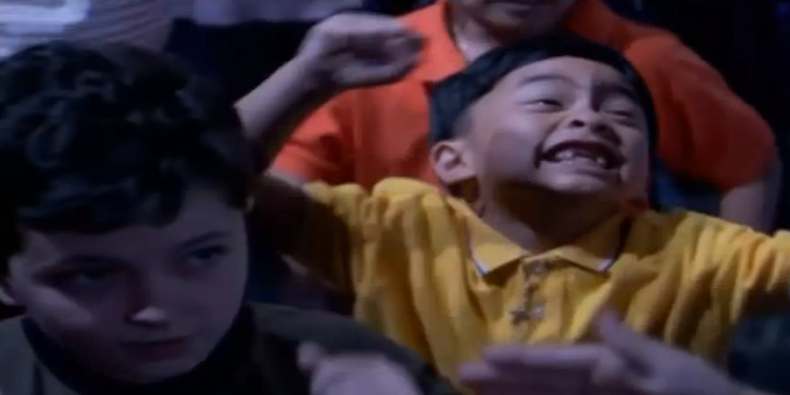 It’s been just over two weeks since Americans unwrapped the bounty under the tree, and the Billboard charts have settled into their usual post-holiday funk. But the last couple of weeks on Billboard’s flagship album and singles lists—reflecting sales and airplay from the 12 days after Christmas—are revealing in their own way. I call it Kid Season, when folks under 18 exert their influence.

The big beneficiaries this year: a trifle of a single by Pitbull and Ke$ha, and a soundtrack album to a Disney animated film with surprisingly long legs.

The precedent for this kid-centric sales pattern dates all the way back to the start of the SoundScan era in 1991. Basically, as the data behind the charts has gotten more accurate over the last two decades, we’ve been able to track the difference between the albums adults buy before Christmas—for each other and for their offspring—and the stuff said offspring buy when they’re only buying for themselves.

Arguably, the first major beneficiaries of Kid Season were now-Hall of Famers Nirvana. Almost everyone who’s even heard of the band knows their most famous chart stat: When their breakthrough album Nevermind topped the Billboard 200 album chart at the start of 1992, it knocked Michael Jackson’s heavily hyped Dangerous out of the No. 1 spot.

What’s less known about this era-defining moment is the importance of timing—and Christmas. The official Billboard issue date for the week Nevermind replaced Dangerous at No. 1 was January 11, 1992—but there’s a time lag between when SoundScan collects its data and Billboard publishes its charts; the data for that particular chart was gathered from December 23–29, 1991. Basically, Jackson’s album had been the top choice of gift-givers right up until the week before Christmas, but when the holiday was over, teenagers armed with Sam Goody gift cards (or copies of Dangerous to exchange) marched to stores to buy Nevermind.

The next wave of artists to benefit from Nirvana’s (accidental) example were rap and R&B acts, led by DMX. The barking rapper essentially invented post-Christmas as a premeditated release strategy with his sophomore album, Flesh of My Flesh, Blood of My Blood, his second 1998 release and second chart-topper. The industry was scratching its collective head when Def Jam dropped the DMX disc December 22—just three days before Christmas, a then-unusual move.

Who would buy a major fourth-quarter release so close to Santa Day? Young hip-hop fans, it turns out, whose parents would have been too squeamish to give junior a CD with a blood-drenched rapper on the cover; Flesh/Blood not only debuted on top, it did so with a staggering 670,000 copies in week one, knocking that year’s holiday-friendly Garth Brooks album out of the penthouse. For the next 10 years, at least one major hip-hop or R&B star—from Snoop to Nas to Jamie Foxx—would drop an album within a week of Christmas; in seven of those 10 years, the No. 1 album in early January was a rap or R&B disc.

While it might seem like young people’s top priority after December 25 is buying something to make parents’ toes curl, that’s not always the case—squeaky-clean tween fare has also done well in January.

The soundtrack to the Disney Channel’s first High School Musical movie dropped in early January 2006, just a couple of weeks after Christmas, and sold better than expected out of the gate, eventually topping the chart in late winter. Right after Christmas 2008, Taylor Swift’s blockbuster album Fearless—which hadn’t been No. 1 since its debut week in early November—rode the Kid Season wave and returned to No. 1, staying there throughout January 2009. And in one of the starkest generational shifts pre- and post-Christmas, the mom-friendly blockbuster of 2009’s holiday season, I Dreamed a Dream by Susan Boyle, was ushered out by an album that dropped on January 1, 2010, by an artist less than half Boyle’s age: Ke$ha’s debut, Animal. (Actually, maybe that disc should be filed next to Nirvana and DMX among the parent-panickers.)

This year’s post-Christmas album-chart victor is cleaner and even younger-leaning than usual: the soundtrack to the Disney blockbuster Frozen. This week, powered by sales from the week that included New Year’s, Frozen reaches No. 1 on the album chart for the first time, with an impressive-for-January sales total of 165,000. The soundtrack’s success has come as a surprise to many, given the toon’s improbably long run atop the box office and the fact that it’s only the fourth animated film soundtrack to reach No. 1 (after The Lion King, Pocahontas and Curious George).

On the other hand, Frozen is benefiting from chart trends that make its success eminently logical. For one thing, recent years have seen several soundtracks to late-in-the-year movies hit No. 1 in the new year, when the bar to reach No. 1 is lower: Dreamgirls (2005 movie, No. 1 in 2006), Juno (2007 and 2008) and Les Miserables (2012 and 2013) all hit the top thanks to January sales. The Les Miz movie soundtrack was No. 1 literally one year ago this same week—and you have to imagine tweens and teens had a hand in that.

But more important, Frozen is a fitting Kid Season hit—more early-tween than teen, obviously (but the sullen teenager who a generation ago was buying Nirvana or DMX isn’t buying many albums today, period). Just imagine thousands of pubescent Taylor Swift fans getting iTunes gift cards for Christmas, with nothing to buy from her this year while she works on her next album, clicking “buy” on Frozen instead. Although none of the soundtrack’s songs are getting much play yet at radio, four tunes from it have appeared on the Hot 100 thanks to strong digital-song sales, a further indicator of kid adoration. Currently, two versions of “Let It Go”—one by Tony-winner Idina Menzel, the other by kid-TV goddess Demi Lovato—are riding the Top 40 simultaneously.

Speaking of singles, sales of songs in the weeks just after the holidays have been equally revealing as albums over the years, especially since Billboard and Soundscan began tracking digital sales of songs in 2005. Every December in the digital era, the charts have seen a burst of singles-buying activity starting midday on December 25 and continuing through the rest of post-Christmas week, as kids who received their first i-device or, more frequently, iTunes gift cards turned on their gadgets and cashed in.

The result is a post-Christmas U.S. sweepstakes to rival the U.K.’s annual Christmas No. 1 tradition: Every January, Billboard reports record or near-record digital activity for the last week of the year, with top-ranked songs’ sales totals reliably swelling by more than 100%. While most weeks of the year, a chart-topper will move 200,000 to 300,000 copies, during post-Christmas week totals well above 400,000 are typical. Even now, when digital sales appear to have peaked as consumer behavior shifts from buying to streaming, the final days of the year are fat ones for iTunes and other digital song-sellers.

In the nine years since digital sales have been tracked, the best-selling song during post-Christmas week has universally been tween- or teen-friendly—indeed, two of the megasellers have involved Ke$ha. Here’s the list of songs that sold the most copies during the last chart week of the year:

In many cases, the post-holiday winner was already a chart-topping hit when the sales boom appeared—Flo Rida, Ke$ha, Mars, LMFAO; all that iTunes-clicking only made big hits bigger. But the very first act to ride the trend, Atlanta snap-music crew D4L, was a total one-hit wonder—”Laffy Taffy” was their first and only Top 40 hit—that never would have reached the penthouse without that one-week burst of sales. And although she’s now a household name, Lady Gaga’s career was arguably made by her post-holiday burst; “Just Dance”, her debut single, had been on the Hot 100 for almost half a year, rising gradually, before her sales bonanza after Christmas 2008 finally sent the song to No. 1.

The latest beneficiary of the annual post-Christmas sweepstakes—”Timber” by club-rapper Pitbull and frequent club patron Ke$ha—waited a full month at No. 2 on the Hot 100, stuck behind “The Monster”, Eminem’s sequel single with Rihanna. The iTunes sales burst eventually worked its magic for Señor Pit—this time, it actually took more than one week to kick in, narrowing the gap with Em’s single last week and finally overtaking it this week (after “Timber”‘s 442K post-Christmas week, its sales two weeks after the holiday were just over 300,000, an excellent total considering iTunes sales have begun to ease up.)

With its club-folktronica beats and lyrical odes to dancing honeys’ low-dropping posteriors, the featherweight “Timber” resembles nothing so much as the victor of post-Christmas 2007, Flo Rida’s apple-bottom-jeans homage “Low”. Both songs are lascivious, trivial and goofy—the sort of smut best enjoyed by the preadolescent. Behold, Kid Season in full effect—long may they click.