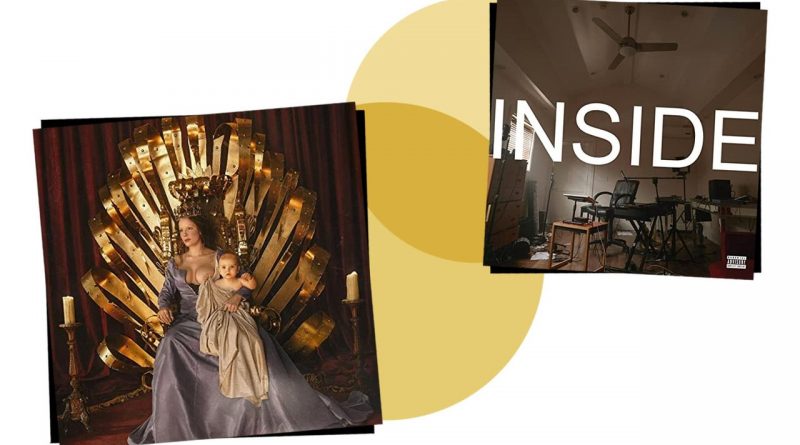 Hey there, my friends tired of hearing how much I miss you:

I’m throwing off the cocooning reassurance of my Gravity Blanket™ long enough to throw down with you all about 2021, the ultimate letdown of years. In last year’s Music Club, I called 2020 “the Tekashi 6ix9ine of years”—that is, a walking garbage fire. Whereas ’21 was more like Drake’s Certified Lover Boy; we were promised post-pandemic spectacle, something way 2 sexy. Instead, we were delivered numbing knife talk. Sometimes involving actual knives.

I did my part for the Great Languishing: I started a pandemic book and then dropped it. (Paused it! Editors, I have paused it.) After writing a near-full draft of my book‑in‑progress on the chart and cultural history of Lil Nas X’s “Old Town Road,” I started revisions last spring only to find myself, to Carl’s point, both way too busy and way too unmotivated to finish. (News flash: Book-writing is hard.) Sure, having to adjust my meds to our seemingly endless COVID malaise didn’t help; nor did moving back to New York just in time for the Delta variant. I felt the kind of ever-present anxiety even Dua Lipa’s bops couldn’t cure. But in part, I blame my book-writing paralysis on Montero Lamar Hill himself. No, seriously—he screwed up the premise of my book by being even more awesome than I expected.

When I started the book in late 2020, Nas only had a couple of non-“Road” hits to his name, one of them the fluky, short-lived, No. 5–peaking and Nirvana-biting “Panini.” Musically, I expected him to come back with something eventually, but as 2021 started, it was equally plausible that he might ride off into the sunset writing horsey-themed children’s books. Even if he did come back, I figured—let’s be honest, I think we all figured—dude would have an uphill battle to ever top the charts again. Oh, we of little faith: Our queer-and-proud hero topped the big chart twice in 2021, with the gayest No. 1 ever “Montero (Call Me by Your Name)” and a quick summer-into-fall follow-up, his Jack Harlow–supported prison-sex satire “Industry Baby.” (Each of these Nas No. 1s ejected a hit by none other than  Justin Bieber! Take that, heteronormativity.) This made Lil Nas X one of only five 2021 Hot 100 chart-toppers to score a pair of No. 1s. The other four? Olivia Rodrigo, Drake, Bieber, and BTS. That’s some heady company. Even if you want to tote Rodrigo in the fluke column—although, weeks away from her likely multi-Grammy coronation, she seems retrospectively inevitable—any way you twist Satan’s head, no one saw Nas becoming an effortless repeat hitmaker. And by the way, these were real, durable hits: “Montero” became radio’s third-most-played track over the summer, and “Industry Baby” is still a top five radio staple now, months after it peaked.

So … yeah, my “Old Town Road” monograph—part of a new 33⅓-style “Singles” series on culturally influential songs—was rendered just a little more passé every week. Lil Nas X’s conquering ’21 run has changed his script fundamentally: from a hesitant closet-vacater to an outer-than-out icon; from a near–one-hit wonder to an artist building a serious greatest-hits album; from a country-trap singer infamously wronged by Nashville to a guy who will never need to align with any genre again, least of all country. To both Ann’s and Briana’s points about the inherent limitations of genre—a perennial Music Club topic—Nas knows “fucking with boundaries” is his brand. That means not only musical boundaries (frankly, “Industry Baby” bums me out just a little, because it’s the first fairly conventional Lil Nas X rap single; I want the guy to be impossible to pigeonhole). It also means fucking with boundaries of propriety, of gendered expression, of what we share in mixed company.

Not sure if you noticed, but oversharing was big this year. I mean, pop music has long been about confession—when I did a Hit Parade episode this summer about the hitmaking career of Bruce Springsteen, it was the the first time I really grokked how much 1984’s seeming party record “Dancing in the Dark” is a therapy session on wax. And god knows my generation was all about the vein-opening, imagistic lyric. But Gen-Zers are really laying it bare and, to their credit, making it plain: Lil Nas X describing his dream boy in very specific detail, begging for “someone who love me … THAT’S! WHAT I! FUCKING! WANT!” while weeping in a wedding dress. Olivia Rodrigo cursing at and dismantling a heartbreaker across four hits, each more resentful than the last, with lamentations as blunt as, “Screw you! You will never have to hurt THE WAY! YOU KNOW! THAT I! DO!” Willow Smith, turning the subtext of her celebrity lineage into text (“Yeah, they’re treating me like royalty, but is it kissin’ ass?”), ripping on “fake friends” and “snakes” and—while her Dad Rock–in’ pal Travis Barker pounds the skins—banshee-yodeling her payoff line, “I can see right through, JUST SO YOU KNOOOOOOW!” Audible all-caps and exclamation points—they were on-trend for ’21, too.

So, too, was nth-generation pop-punk and its hard-to-define cousin, emo—all of these singles were awash in guitars, nary a trap beat to be found. By my count, this is at least the fourth wave of emo, preceded by the emotional hardcore of the ’80s and early ’90s; the mainstream-conquering emo of Dashboard and Fall Out Boy at the turn of the millennium; and, most improbably, the late-’10s wave of emo rap and EDM—especially post-SoundCloud rap that fronted like rock. I must say I didn’t go into 2021 expecting Blink-182 to be the year’s most all-pervading influence; rock-qua-rock has been declared dead so often in the last decade. But two years of pandemic-trapped teens picking up Fenders and Gibsons had to lead somewhere, right? Postmillennial punk has become the sound of soul-baring on the charts, at least for artists crossing into their twenties in the ’20s.

To be clear, I loved these records. But I also clung to the ways Emo 4.0 manifested across the hit parade this year, in the vein of the divorce pop Lindsay identified (Adele, Kacey), as well as torch balladry (Olivia, Taylor’s 10-minute epic reboot), indie pop (Japanese Breakfast), and whatever you call what Bo Burnham does. Am I going to be the only Music Clubber to rank his Netflix special–meets–sad cabaret Inside (The Songs)? (Not Steacy, clearly; I think I know what you mean by calling Burnham “smug,” but that isn’t a dealbreaker for me. Taylor Swift can be smug, too.) I very nearly ranked Inside my No. 1 album, for the simple reason that Burnham’s collection of pandemic professions was the music that most surrounded me this year, like amniotic fluid. This was thanks largely to my teenage stepkids, who played the bejesus out of Inside’s songs, mostly in the car and never in any kind of order. My stepson tends to zap to the first “[Jeffrey] Bezos” and “Shit,” my stepdaughter knows every nuance of “FaceTime with My Mom (Tonight)” and “Sexting,” and of course we all think “White Woman’s Instagram” is a work of genius. (Also, when I tried to include the radio edit of “All Eyes on Me” in our summer mix, my wife insisted I reinstate the version with the F-bomb.) In the end, I couldn’t quite rank Burnham’s project first, because that it was never meant as an album—a music executive had to tell Burnham, after the special premiered on Netflix, that it should be one—and it doesn’t really work as an album. Billboard charts the collection on its Comedy Albums chart, although it did reach an amazing No. 7 on the all-genre Billboard 200. I have tried playing Inside (The Songs) in order and find it exhausting in one sitting. And yet, the wave of covers Burnham’s songs inspired, from piano bard Julian Velard to indie-rock deity Phoebe Bridgers—her version of “That Funny Feeling” that Carl put on his songs list actually charted!—kept reminding me all year what a musical achievement Inside was. A third-place ranking seemed about right.

Instead, I reserved my personal top slots for the albums I actually played the most: Olivia Rodrigo’s endlessly banging, utterly guileless Sour; and If I Can’t Have Love, I Want Power, the inspired team-up between electropop-and-B queen Halsey and Gen-X awards magnets Trent Reznor and Atticus Ross of Nine Inch Nails. From the moment I heard the atonal opening piano notes of “The Tradition”—vintage NIN circa The Downward Spiral!—paired with Halsey’s creepy waltz-time lyrics (“Take what you want/ Take what you can/ Take what you please/ Don’t give a damn/ Ask for forgiveness/ Never permission”), I realized this was Very Much My Shit.

I mean, I and a handful of aging Gen-Xers must be the target market for IICHLIWP. As per Carl’s and Lindsay’s formulation of accomplished 2021 albums not trying to recapture past commercial glories, a la Musgraves, Eilish and Lorde, the album seems more interested in limning Halsey’s roiling postpartum emotions than generating hits. It doesn’t have a natural radio format and is seriously underperforming, both on the charts (after a No. 2 debut behind Kanye’s Donda, it tumbled off the Billboard 200 after just seven weeks) and even with the Grammys; Capitol managed to get the trio of Halsey, Reznor, and Ross on the cover of Billboard’s Grammy preview issue, and all they got for their trouble was a single Alternative Album nomination, rather than the Album of the Year nod they were clearly gunning for (and which the album deserved). So this stripped-bare album is probably making Halsey, if she even cares, a little more melancholy about where she goes from here creatively. Those of us who remember Emo v1.0 are here for her.