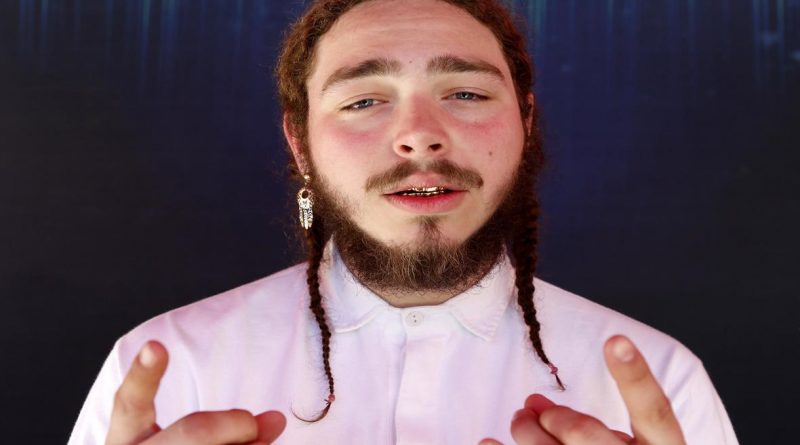 Can you feel that chill in the air? And inhale the crisp aroma of depleted whip-its? For the third straight October, the song commanding Billboard’s Hot 100 as the autumn blows in is a damp, druggy bummer of a club track—a grim reflection of the season. Two years ago, the Weeknd’s spooky, coked-out, and improbably massive “The Hills” owned the Hot 100 for all of October and part of November. Last year, the Chainsmokers’ wistful summer-into-fall EDM-bro reverie “Closer” was deep into a dozen-week run on top when leaf-peeping season began. And this year, we have perhaps the bleakest chart-topper yet, Post Malone’s “rockstar” featuring 21 Savage, a song so downbeat its title can’t even muster a capital letter. Now in its fifth week in the Hot 100’s top two, including a fortnight at No. 1, Malone’s hit (which we persnickety Slate grammarians will call “Rockstar”) is nominally a party track, but it’s the dreariest party ever.

If you were to only read the lyrics to “Rockstar,” you might think it raucous: an ode to Spinal Tap–worthy debauchery, including endless groupies, copious substances, and televisions tossed from luxury hotels. Post Malone has been seen stage-diving while performing it. But the music tells an entirely different story. Built around a synth line so ghostly and dour it barely even qualifies as hip-hop, it’s closer to vintage Vangelis than trap music. Malone sings the wordy chorus in a barely inflected, metronomic monotone. The juxtaposition of the song’s seemingly giddy refrain—“I’ve been fuckin’ hoes and poppin’ pillies—man, I feel just like a rockstar”—with that soul-crushing synth line, a morosely thumping beat, and Post’s vocal worthy of Marvin the Paranoid Android makes “Rockstar” one of the most showily ironic songs of the year. It’s basically a rap-adjacent version of “Lick My Love Pump,” the haunting ballad Nigel Tufnel wrote in D-minor, “really the saddest of all keys.”

If my Spinal Tap analogy seems glib, know that Post Malone clearly aspires to Tufnel’s lifestyle. It is remarkable how the myth of the rock star persists in pop music across genres. Rappers have been calling themselves kings of rock since the 1980s, and in the ’00s, the word appeared in Billboard’s Top 10 repeatedly, in hits by both Canadian rockers Nickelback and Atlanta rappers the Shop Boyz. Just one year ago, the Hot 100 was crowned by Rae Sremmurd’s “Black Beatles,” a song that invoked the titular rock gods only as a symbol of money-minting hegemony, not baroque ’60s pop. In a decade where not even nominally “rock” songs involve guitars, and music’s baddest bad boys are more likely to rock an 808, the rock-star archetype retains purchase with musicians and fans who came of age after the global financial crisis.

As little as Malone’s hit qualifies as hip-hop, he qualifies even less as a rapper. Born Austin Post in Syracuse, New York, and raised largely in the greater Dallas area by a father who worked for the Cowboys, Malone could just as easily have been a country-rocker. Before he topped the charts he was uploading acoustic covers of Dylan and Bon Jovi songs. Malone—a last name Post gave himself, which fans connect to basketball’s Karl Malone but which Post claims is meaningless—leans heavily on a downbeat singsong flow that’s not far removed from his former folkie crooning. He patented the sound two years ago on his debut single “White Iverson” (No. 14) which, from its titular allusion to braided NBA star Allen Iverson to its baller lyrics, was a self-conscious homage to code-switching.

That hit set the template for Malone’s career to date: a smashing-together of downbeat music with seemingly celebratory subject matter (a No. 8 hit earlier this year, “Congratulations,” sounded anything but exultant) plus a knowing, almost self-deprecating acknowledgment of Post’s race. Malone wrestles with his white privilege in interviews while correcting those who would call him a rapper. From his red-state bona fides to the NRA card in his wallet, one wonders how long he’ll ride his rap cred before reverting to type. As it is, he’s already hinting he might turn back to country or rock. (All this basically makes Post the 2010s’ answer to ’90s pseudo-rapper–turned–’00s “heartland” bullshit artist Kid Rock, which … one of those is plenty, thanks.)

Billboard claims that, going by generally accepted industry genre definitions, “Rockstar” is the fifth rap song to top the Hot 100 this year—following hits by Migos, Kendrick Lamar, DJ Khaled, and Cardi B. That’s the most rap No. 1s on the big pop chart since 2006—the tail end of hip-hop’s dominance of the early-to-mid aughts. But among these 2017 smashes, “Rockstar,” even beyond its title, is the most tangential, least rappy song of the bunch (even more so than Khaled’s gooey, Justin Bieber–showcasing “I’m the One”). Post basically outsources any actual rapping on the track to guest 21 Savage, an Atlanta rapper with a more traditional flow, currently enjoying his own hit “Bank Account.” That leaves Post to croon the track’s fluttering melody, including an addicting chorus that’s so maddeningly catchy Republic Records posted a three-and-a-half-minute loop of it on YouTube in place of the full song.

That YouTube loop has been the subject of much controversy and side-eye since “Rockstar” ascended to No. 1 last week, with several reporters accusing Malone and Republic of chart shenanigans. Their tactic is, at the very least, diabolical and seemingly unprecedented: The chorus-loop mix of “Rockstar” is the only posting of the Post Malone recording on YouTube or Vevo (all other video searches of the track turn up covers by amateur artists). Visiting that YouTube page accomplishes two things for the record label and artist: First, because the full chorus from the original recording is what’s looped, according to Billboard policy it actually counts toward the song’s streaming data (not unlike the way a user-generated clip that uses at least 30 seconds of an original recording contributes to a song’s chart position). And second, right at the top of the YouTube page is a link from Republic to a “Rockstar” landing page filled with links to on-demand streaming services with better royalty rates than the notoriously low-paying YouTube. If you want to listen to the full song, complete with Post’s sung verses and Savage’s supporting raps, you’ll need to either buy a download or stream it on services such as Spotify, Apple Music, Tidal, or Deezer.

Those who would clutch their pearls at this gamesmanship—I chuckled at the New Yorker critic who gasped, “It would be sad to see labels start to game the numbers”—would do well to remember that this is the music business, which over the decades has tried everything from institutionalizing radio payola to pricing cassingles at 49 cents to dropping half-assed remixes of stalled pop singles to give their product that final push up the charts. As is true in Washington or your state congress, what’s shocking is not what’s illegal but what’s legal. Republic is not only playing the ball where it lies, they’re trying to address the “value gap” that makes YouTube less remunerative for both labels and artists.

The value gap is such a serious music-industry controversy that in the next few weeks, Billboard will institutionalize new Hot 100 weightings to tilt the chart a bit more toward paid streaming services and less toward ad-supported services that pay lower royalty rates. In the meantime, Republic and Malone took matters into their own hands. And for the record, the roughly (at this writing) 65 million streams of the all-chorus “Rockstar,” spread over the five weeks the clip has been posted to YouTube, average out to about 13 million streams a week. That’s not nothing, by any means, but it’s probably not enough by itself to give Post Malone a Hot 100 chart-topper. At the very least, it’s no shadier than the late-issued Kodak Black remix of “Bodak Yellow” that nudged Cardi B from No. 2 to No. 1 last month.

If there’s anything that bothers me about the all-chorus, 21 Savage–less version of “Rockstar,” it’s the way it bowdlerizes the song down to its grabbiest and most white-radio–friendly element. This, too, is not new—labels have been proffering rap-excised versions of pop and R&B hits for decades to radio stations with “no rap!” policies, from “Crazy in Love” to “Empire State of Mind” to “See You Again.” In this case, though, it doubles down on the white-appropriator narrative of Post Malone’s career.

On the other hand, what makes “Rockstar” fascinating as a phenomenon, whatever you think of it as a song, is the way it unites the white and black underclass in mutual depression amid the now years-long opioid crisis. Temperamentally, at least, Post and his guest rapper Savage are aligned. On Savage’s hit Issa Album, he raps about “numb[ing] the pain with money.” And as a smart Guardian article points out, well before Malone uploaded his first mixtape, hip-hop had been moving toward a new, post-gangsta nihilism. Earlier this year, arguably the king of druggy sad-rap, Future, scored back-to-back No. 1 albums and his first-ever pop Top Five hit as a lead artist with the flute-sampling “Mask Off.” Its mantra-like chorus, “Percocets, molly, Percocets,” is a clear antecedent to both the sound and bleak spirit of “Rockstar.”

The cynic might argue that Future scoring the Top Five hit with this sound and Malone reaching No. 1 with it is the oldest story in the book, not just in rap, but in the long history of rock ’n’ roll. Is that what Post means by feeling like a rockstar? You can’t argue that his hit doesn’t reflect something in the culture. When he sings, “Rest in peace to Bon Scott … Light a fire like I’m Morrison … Act a fool on stage, prolly leave my fuckin’ show in a cop car,” he’s giving props to his white-appropriator forebears while also suggesting what it would take for him to have a run-in with the po-po. I’m guessing that encounter won’t end too badly for him.