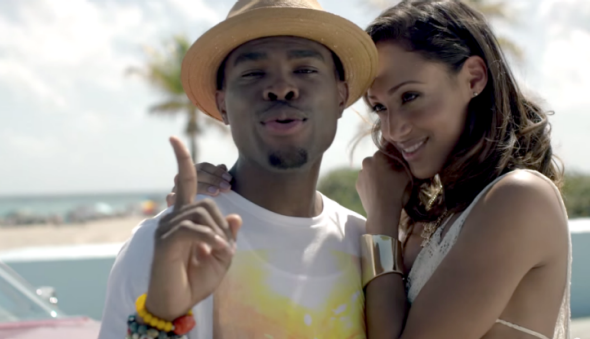 Well, America, you certainly are consistent. One year—to the week—after the Hot 100 was topped by the frilly, reggae-based, down-on-one-knee “Rude” by Canadian jammers Magic, Billboard’s flagship pop chart is topped by another border-crossing, reggae-derived tune ending in a popped question.

Only this time the act actually hails from Jamaica: Clarendon native Omar Samuel Pasley, aka OMI, takes the summit of Billboard’s authoritative pop survey with “Cheerleader,” his ode to passive, sure-why-not monogamy. That makes him the first Jamaican to top America’s hit parade since Kingston native Sean Paul took the dancehall smashes “Get Busy” and “Temperature” to the Hot 100 penthouse, in 2003 and 2006, respectively.

It’s tempting to reach for easy explanations for OMI’s chart victory, and the lilting, tropical vibe of “Cheerleader” positively screams “summer hit.” Some critics have already argued that Americans turn their ears to the Caribbean every summer, and OMI is just the white-linen-clad emissary for 2015. But “Cheerleader,” which has spent the last year topping charts around the world, is a smash for all seasons. In Sweden, it hit No. 1 last November. In France, it topped the charts in April. And in the U.K., it took the top spot in May. This theory that hot weather and island spice make for a recipe for American radio dominance also ignores decades of Hot 100 history. Magic notwithstanding, U.S. reggae-based smashes have peaked all over the calendar. Both of Sean Paul’s aforementioned chart-toppers were winter-into-spring hits. Shaggy’s No. 1s, “It Wasn’t Me” and “Angel,” peaked in the first quarter of 2001. Ini Kamoze’s “Here Comes the Hotstepper” crested just before Christmas 1994. And UB40’s cover of Neil Diamond’s “Red Red Wine,” which took five years to break in America, finally did so in the fall of 1988.

There’s also the matter of how OMI categorizes, or doesn’t categorize, himself—he eschews the reggae and dancehall tags altogether. As I noted for this column last year when “Rude” topped the chart, reggae pop hits tend to come in waves in America—for example, on the charts of two decades ago, UB40 begat Inner Circle begat Snow begat Big Mountain—and I suspected it might not be long before another such jam rang the bell. As I also noted, however, a lot of the No. 1 songs we categorize as “reggae” are at least a shade or two removed. Chart-toppers over the decades like “I Can See Clearly Now,” “Close to You,” and “Beautiful Girls” are hybrids of Jamaican flavor and American R&B. (That’s what made “Rude” last summer sort of funny—a bunch of Canadians offering a reggae skank so basic it could have come from a Garage Band preset.) Truthfully, American music obsessives are more concerned with questions of reggae legitimacy than are actual Jamaicans. As the sharp critic and Jamaica-based scholar Erin MacLeod pointed out in a recent Guardian article, Jamaicans care little about authenticity and unabashedly love cheesy anglo-pop like Air Supply and Michael Bolton. In the 21st century, the people policing the borders of what qualifies as “real” reggae tend to be white critics.

Add OMI to the list of Jamaicans untroubled by reggae legitimacy. He prefers to call his global megahit “world music.” That might sound like an imprecise, jargony term. But if any song deserves to be called world music right now, it’s “Cheerleader”—a song written by a Jamaican but turned into a smash by a young German producer whom OMI has never met. It’s also world music because, in 2015, the world’s music is electronic dance music, and the hit version of “Cheerleader” arguably has as much to do with EDM as it does reggae.

Regardless of where we file his hit, we should all thank OMI. He’s bringing the Hot 100 back to life in a summer, and a year, that’s seen little turnover in the No. 1 spot. More than six months into 2015, Americans have seemed unwilling to loosen their grip on the biggest songs of winter and spring: Mark Ronson and Bruno Mars’ “Uptown Funk!” (No. 1, 14 weeks, January to April) and Wiz Khalifa and Charlie Puth’s “See You Again” (No. 1, 12 weeks, April to July). These two songs have seemed nearly unkillable; indeed, “Uptown Funk!” only fell out of the Top 10 last week. Even when you add in Taylor Swift’s one-week run at No. 1 with “Bad Blood,” “Cheerleader” is only the fourth new song to top our chart all year.

Perhaps it’s appropriate, then, that the song that finally breaks the jam atop our glacial chart has itself travelled there at a leisurely pace—a slow hit if ever there was one. “Cheerleader’s” history goes back more than three years, and its origin story is a reminder of the power a producer often has in shaping the sound of a hit.

By his own telling, OMI didn’t even mean for the song to be a standalone track. In 2012, the then-25-year-old Omar Pasley wrote only two verses of “Cheerleader” and envisioned the catchy melody not as a song, but as an interlude for an eventual album. Producer and manager Clifton “Specialist” Dillon convinced Pasley that the track deserved a third verse, and he brought in veteran rhythm section Sly Dunbar and Robert Shakespeare—the production duo known as Sly & Robbie—to help complete the track, along with seasoned saxophonist Dean Fraser. With all that classic Jamaican talent in the studio, it’s no wonder OMI’s 2012 “Cheerleader” wound up as a traditional-sounding island smash. Note the languid tempo and high-pitched reggae horn sound of the original recording:

This straight-reggae version of “Cheerleader” was a success in the places where such island-style records are typically hits: OMI’s native Jamaica as well as Dubai and Hawaii. The almost lovers rock–style pace of the track suited OMI’s devotional lyrics: “She walks like a model/ She grants my wishes like a genie in a bottle … All these other girls are tempting/ But I’m empty when you’re gone.” As laughably retrograde as these sentiments are (I’d be a total player and step out on you, if you weren’t so servile and totally hot!), the simple, succinct metaphor in the chorus—“Oh, I think that I found myself a cheerleader/ She is always right there when I need her”—is universally relatable and cross-culturally memorable. That lyric, paired with OMI’s catchy core melody, persisted as the essence of “Cheerleader” as the song evolved.

It was at this point that OMI attracted the attention of Ultra Music, the EDM label that houses a large stable of producer-remixers and, in the late ’00s, converted Latin rapper Pitbull into a dance-pop crossover star. Ultra signed OMI in late 2013 and commissioned two remixes of “Cheerleader” from the DJs in its rolodex—one from Brooklyn dancehall/hip-hop producer Ricky Blaze, and one from 24-year-old German deep-house producer Felix Jaehn (pronounced “yehn”). The Blaze mix was a martial, thumping club mix closely tethered to the original recording. But the take that most impressed OMI, and that became Ultra’s global version of the single in early 2014—the one that is now thumping from your radio—was Jaehn’s mix.

Even if you’ve heard the hit version of “Cheerleader” on your Top 40 station dozens of times, it’s worth relistening to it with OMI’s Jamaican incarnation, above, in your head. A side-by-side comparison is the best way to fully appreciate Jaehn’s wholesale, yet subtle, reinvention. Jaehn sped up the tempo—you can tell from the slight wobble in OMI’s pitched-up vocal—and gave the chorus an electronic thump that sounds utterly inorganic and yet strangely island-flavored, like a wood block echoing from the bottom of a deep digital well. Sly & Robbie’s rhythm section has been effectively replaced by a Latin-jazz-style walking piano line. And Fraser’s high reggae sax has been discarded in favor of an unidentified sample of a low-pitched trumpet—it opens the single and will provoke nostalgia in fans of vintage ska.

In sum, a German house producer has taken this natively Jamaican track and reupholstered it by excising almost everything organic from the original construction—and yet the finished product sounds credibly ersatz-Caribbean to Anglo ears. As Courtney Love might say, it fakes it so real it is beyond fake.

This rootlessness and pastiche could not be more of the moment in America: This is arguably Top 40’s summer of the remix. More than ever, the artist has taken a backseat to the producer. Taylor Swift’s aforementioned “Bad Blood” needed heavy retooling to become radio-ready. Two hits produced by DJ Snake, the man behind last year’s Lil Jon comeback “Turn Down for What,” have been tussling in the Top 20 since June: AlunaGeorge’s “You Know You Like It” and Major Lazer’s “Lean On.” Nicki Minaj put two singles into summer contention, but the track that’s done better on the charts, by far, has been the David Guetta–fronted “Hey Mama,” over Nicki’s solo joint “The Night Is Still Young.” Most notably, tabloid fixture Justin Bieber has quietly slunk back into the Top 10 by hiding behind EDM demigods Diplo and Skrillex, on the sonically detailed, critic-shockingly excellent “Where Are Ü Now.” Obviously, producers have been instrumental to the sound of hit records since the days of Motown and the Beatles,. But what was once backdrop is now, in the age of the EDM megaproducer, foreground.

For his part, the ambitious OMI does not seem bothered by the machinations that generated his smash single—to date, the only recording in his discography. Besides the fact that he is fully enjoying his moment in the spotlight, he also appears to grasp that the malleability of “Cheerleader” is its strength. That might make it easier for him to follow it with another hit, where other Jamaica-based hitmakers of yore (Shabba Ranks, Beenie Man, and Wayne Wonder) have been thwarted.

But given that two singles by rising R&B star The Weeknd are already breathing down Mr. Pasley’s neck, his stay at the penthouse this time might not last longer than a hot minute. Still, OMI’s industrious, all-embracing love of pop makes it a little hard not to root for him. Maybe the cheerleaders he’s singing about are us.