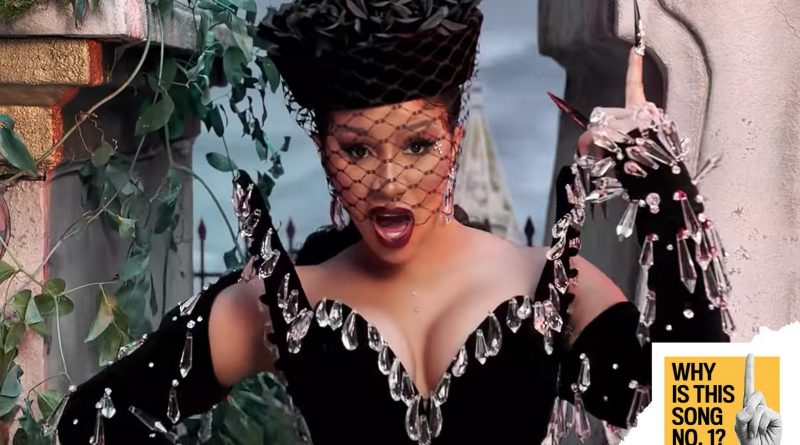 When I watch the Grammys every year, I like to play a chart-nerd parlor game I call “Grammy Bump.” It doesn’t happen every time, but in many years, a song, an album, or even a whole genre will see a conspicuous rise on the Billboard charts the week after the show. The Recording Academy’s televised musical-variety spectacle that happens to include some statuettes is a reliable juicer of sales and streams. Winning an award can push a song or an album up the Hot 100 or Billboard 200. And performing on the show is much, much better promotion.

What’s fun about the Grammy Bump game is its unpredictability. Going into the show, you don’t know who’s going to have a standout performance; coming out, it’s still anyone’s guess what will spur Americans to download or stream the bejesus out of what they just heard. For example, 10 years ago, during the 2011 Grammys, it was entirely predictable that Lady Gaga would give a bonkers performance of her brand-new single “Born This Way” and see it top the Hot 100 the following week. What was not predictable was that the little-known Mumford & Sons—who won no gramophones that night and performed only in a hoedown-style medley of bands supporting Bob Dylan—would end up with a career-making album sales bump they feasted on for a decade. (Can’t say that worked out for any of us, possibly including the Mumfords … but hey, the game’s still fun.)

This year, my Grammy Bump money was on Dua Lipa. This was, I admit, motivated thinking on my part: I am very publicly in the tank for Lipa. While I knew her killer Future Nostalgia stood little chance against Taylor Swift’s deserved Album of the Year front-runner (and eventual winner) Folklore, I figured Lipa’s praised performance of her current hit “Levitating” with DaBaby would levitate it onto the Hot 100. I even tweeted this wishful prediction early in the show.

I should have known better than to make Grammy Bump forecasts before seeing what our current Queen of Bumpin’, Cardi B, brought to the table. She and Megan Thee Stallion not only killed it on their stiletto-heel-crushing performance of the unfailingly filthy (even while censored and on CBS) “WAP.” But, wisely, Cardi opened her showcase with a current hit, the irresistibly relentless “Up,” which had already come close to topping the chart ahead of the show. Sometimes, the bigger hit is the right answer. And most of the time, you really shouldn’t bet on anyone but Cardi.

Just over a week later, right on schedule, Cardi B has a new No. 1 song. Her combination Chicago drill–plus–NOLA bounce jam is the biggest song in our itching-to-be-vaccinated, ready-to-party nation. Who’s feeling “Up”? Apparently, we all are.

I am leading with the Grammys to provide the main answer to why this song is No. 1, because if not for Cardi’s awards showcase, this very likely wouldn’t have happened. “Up” dropped six weeks ago, which means it’s not that old as hit songs go but is positively ancient in the freaky new chart world, where most songs have been crashing in at No. 1. “Up” debuted at No. 2 in mid-February and has been bouncing around the Top 10 ever since. By finally bouncing from No. 6 to No. 1 this week, “Up” becomes the first new song to rise into the No. 1 spot, rather than debuting there, in five months, since 24kGoldn and Iann Dior’s “Mood” rose from No. 4 to No. 1 last October. In between, not counting a return trip by Mariah Carey’s Christmas perennial, an unprecedented five new No. 1s entered on top: Ariana Grande’s “Positions,” BTS’s “Life Goes On,” Taylor Swift’s “Willow,” Olivia Rodrigo’s “Drivers License,” and Drake’s “What’s Next.” (Four of these were single-week No. 1s, which made them tough to squeeze in for this series. Though I must say, those of you wondering why I didn’t take Slate’s money to write about Drake last week might simply refer to this tweet by one of my loyal readers.)

The reason Cardi B’s latest wasn’t among the parade of instant chart toppers was that one of those five No. 1 entries turned out to be a giant killer. Rodrigo’s “Drivers License”—the only one on the list from a newcomer, and the one that has seemed to own the Gen Z zeitgeist all winter—was No. 1 for eight straight weeks, only departing a fortnight ago when Drake finally ejected Rodrigo from her throne. In the fifth of the song’s eight weeks on top, Cardi’s “Up” made its charge for the charts, but in a tight race for No. 1, “License” held it off. It was a rather ironic turn of events: When it first landed in January, Rodrigo’s first hit made the biggest chart debut since “WAP.” Then, about a month later, Rodrigo held off one of the creators of “WAP” from usurping her.

For the record, the woman born Belcalis Almánzar wasn’t sweating this at all. Cardi B was very happy with her then–No. 2 hit. The week of its debut, she tweeted thanks to her fans for giving her the highest solo debut for a female rapper since Lauryn Hill dropped “Doo Wop (That Thing)” in 1998. The key word in that stat is “solo”; “Up” is just Cardi, no duet or featured performers. She even said in her tweet that she’d “over succeeded”—you can’t fake that kind of Zen. Call me naïve, but the fact that she threw no shade Olivia Rodrigo’s way really indicates she would’ve been content if “Up” had gone no higher than the runner-up slot.

Maybe Cardi had the inner confidence of a woman who knew, a few weeks hence, she was going to crush it on the Grammys (and belatedly send the song to No. 1). In any case, she can afford to be magnanimous. Even before this chart topper, Cardi already stood as the female rapper with the most No. 1s in Hot 100 history—topping Hill, Iggy Azalea, Nicki Minaj and all other comers—after ringing the bell four times in three years: 2017’s “Bodak Yellow”; 2018’s “I Like It” with Bad Bunny and J Balvin; later that same year, a catalytic guest feature on Maroon 5’s “Girls Like You”; and of course, 2020’s “WAP” with Megan.

“Up” pads out Cardi’s record to five No. 1s, basically a lily-gilding victory lap for her. Nonetheless, she still raps like a woman with something to prove. She clearly still wants to show she can top the charts on her own, the way she did on the unsupported “Bodak,” her debut hit. Fortunately, she brought the fire: “Up” is an alchemical cross–hip-hop banger. It’s rooted in the menacing sound of Chicago drill, the past decade’s supremely influential, Chief Keef–derived rap subgenre that has since spread to the U.K., Brooklyn, and all points in between. Bronx-raised Cardi is a professed fan of Chicago drill, which was coming up at the same time she was as an early rap fan-turned-rapper. She has alluded to the drill sound before, on tracks from her debut album Invasion of Privacy like “Money Bag” or “Get Up 10”—the latter helmed by New York producer DJ SwanQo, who also does the honors on “Up.”

But “Up’s” rubbery beat sounds like nothing so much as New Orleans bounce music. Specifically, as Pitchfork’s Cat Zhang points out, the song evokes the Triggerman beat derived from the foundational ’80s track “Drag Rap” by the Showboys, a bubbly rhythm that’s fortified such recent bounce-affiliated hits as Drake’s “Nice for What” and Chris Brown and Young Thug’s “Go Crazy.” Layered on top is possibly the most tongue-twisting set of lyrics Cardi has ever delivered, especially the verses, which are an alliterative flex: “Big bag bustin’ out the Bentley Bentayga/ Man, Balenciaga Bardi back, and all these bitches fucked.” I especially love the relentless flow of the pre-chorus: “I said my face bomb, ass tight/ Racks stack up, Shaq height/ Jewelry on me, flashlight/ I been lit since last night.” Frankly, all of this lead-up is so awesome that you let Cardi slide on the less interesting, still catchy chorus (which, purportedly, Cardi may have bitten): “If it’s up/ Then it’s up/ Then it’s up/ Then it’s stuck.” Seemingly an allusion to an erection, it’s actually Southern lingo for a beef that needs to be settled.

In other words, this is a shit-talking record about ending your drama and owning your awesome. Its combination of drill austerity with bounce energy achieves, to my ears, a pretty neat trick: Cardi has produced a joyous drill song—which sounds oxymoronic, even borderline impossible, yet she makes it work. When she launched with “Bodak Yellow” four years ago, Cardi was a rousing, bruisingly feminist, take-no-shit newcomer, and her breakthrough hit was all menace. “Up” has the same fierceness and braggadocio, but it somehow sounds, well … up—a kind of 2021 sequel to Mary J. Blige’s spartan 2001 party jam, the Dr. Dre–produced “Family Affair.”

Reliable party tracks like this tend to surprise on the upside, charts-wise, which partially explains how “Up” hung around long enough to survive Hurricane Olivia and sneak into the penthouse. In the current chart week, it’s not top-ranked in any of the Hot 100’s three metrics—Billboard reports it’s only third in sales, third in streams, and 14th at radio—but that’s enough to send it to No. 1 now that Rodrigo’s and Drake’s hits have both waned. Cardi’s sales number, in particular, was up massively in the post-Grammys week: a 96 percent jump in dollar downloads. As Billboard’s Katie Atkinson points out, in the digital era, songs that are a few weeks old like “Up” need a catalyst like a buzzy Grammys performance to reengage an audience. Frankly, the morning after the awards, there was more buzz—and conservative garment-rending—over Cardi and Megan’s scissoring “WAP” performance, as well as Cardi’s 18‑pound metallic outfit, than there was over “Up” itself. But clearly “Up” benefited from the new lewk the Recording Academy’s wingding provided. (Cardi’s all about the lewk; she’s even provided a remix of her music video as a so-called Mood Board visualizer.)

I’m increasingly convinced Cardi B is a buzz- and goodwill-generating magician. She hasn’t even released her second album, and yet for two years running, she’s remained at the center of the culture through the deployment of just two winning singles. In the lead-up to this year’s Grammys, several observers pointed out that the awards’ all-time solo queen, Beyoncé, had garnered the most nominations in a year when she didn’t actually release a new album. But Bey, who always puts in the work, spent 2020 doing a whole lot: releasing her musical film Black Is King, the accompanying single “Black Parade” that scored record and song nominations, plus a fiery remix of Megan Thee Stallion’s “Savage” that itself won awards. Cardi B produced a fraction as much output but generated just as much buzz—last summer, at the height of “WAP,” considerably more—and with “Up,” it’s still going. She’s such an efficient superstar, forever poppin’ shit, pullin’ up, and droppin’ shit.