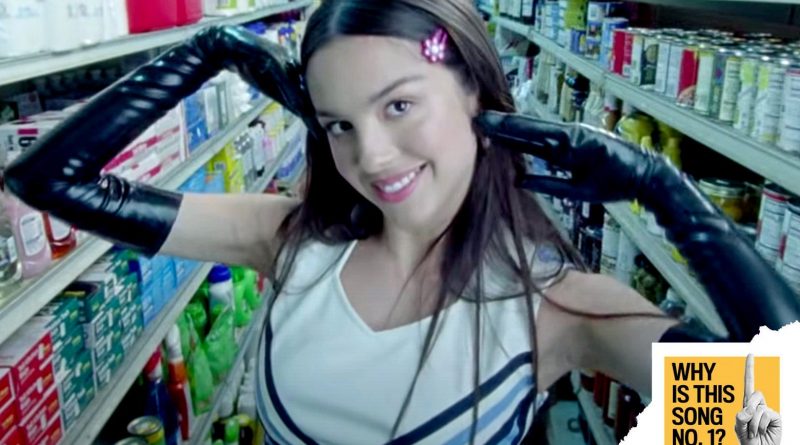 The versatile Disney star might be the dying genre’s best hope.

When Olivia Rodrigo made her much-anticipated appearance on Saturday Night Live two weekends ago, the focus was, overwhelmingly, on the first song she performed, “Drivers License.” Over the winter, that out-of-nowhere chart-topping debut had instantly made her a national (and global) pop sensation—even the subject of a mash note by SNL itself. To say the least, she stuck the landing: Rodrigo’s live “License” was essentially flawless, amplifying the song’s vulnerability with fierce, wounded vocals that were somehow also controlled, belying her 18 years. The media agreed: A superstar was born.

After that showstopper, Rodrigo’s second song of the night couldn’t help but feel like an afterthought—and given its tempo shift, kind of a head-scratcher. But that afterthought is now sitting atop Billboard’s Hot 100. And this song might ultimately prove more important to the narrative surrounding Rodrigo as she continues to take 2021 by storm.

“Good 4 U”—an uptempo kiss-off to a former lover who moved on too quickly, and Rodrigo’s second hit to debut atop America’s flagship chart—not only establishes that she is more than a one-trick pony. It also affirms that Rodrigo’s budding stardom is bigger than any one sound: that as long as she delivers the hooks and the heartbreak, her fans will follow her anywhere.

The punk-tempo “Good” is a snarling rock number, notably out of step with the sound of chart-pop in the early ’20s. It’s not really rock-slash-anything. It isn’t alt-rock crossed with SoundCloud rap like the recent chart-topper “Mood” by 24kGoldn and Iann Dior, isn’t guitar-based trap-pop à la Post Malone, isn’t indie-rock with bedroom-pop hooks a la Taylor Swift’s recent creations. In fact, “Good 4 U” is the most up-the-middle rock song to top the Hot 100 in a decade or more, depending on how liberally you define “rock”—maybe since anthem-rockers Fun in 2012, or Kelly Clarkson in guitar-pop mode circa 2009, or acoustic strummers Plain White T’s in 2007, or even, Kurt Cobain help us, Nickelback in 2002.

That’s only part of what makes Olivia’s new single so delightfully confounding. Normally, the industry practice with an emerging artist, in this fragile moment when the public is still making up its mind about them, is to drop followup singles that replicate the breakout hit. This is a very tried-and-true formula, employed over the decades by everyone from the Righteous Brothers (who rewrote “You’ve Lost That Lovin’ Feelin’” as “(You’re My) Soul and Inspiration”) and the Jackson 5 (“I Want You Back” made over into “ABC”) to Rick Astley (future meme “Never Gonna Give You Up” shamelessly rewritten as “Together Forever”), LMFAO (“Party Rock Anthem” rebooted as “Sexy and I Know It”) and Post Malone (“Rockstar” begat “Psycho”). All were Hot 100 chart-toppers, because the formula works.

By contrast, Rodrigo is now only three singles deep into her music career, all three tracks placed high on the charts, and none sounds like the others. Three months after her torch ballad “Drivers License” debuted at No. 1 (and spent eight straight weeks on top, the longest run of any single so far this year), it was followed by the ethereal, midtempo art-pop of “Deja Vu,” which debuted at No. 8—making Rodrigo the first new artist in Hot 100 history to send her first two singles straight onto the Top 10. Just six weeks after that, the hypercaffeinated “Good 4 U” crash-lands at No. 1. I’ll confess I didn’t see this coming. While “Deja Vu” did very well for a coattails hit, it didn’t duplicate the chart performance of its predecessor and fell out of the winners’ circle even before “License” did. Given how different “Deja” was from “License,” it was impressive it did even that well. “Good 4 U” is an even bigger sonic leap. The night Rodrigo played SNL, “Good” came off as loads of fun but felt like a bit of a reach—a newcomer trying on a different outfit to show breadth. I wasn’t alone; reviews for “Good 4 U” were positive but slightly less effusive. “The punky presence and crunchy guitars were maybe a little less convincing than ‘Driver’s License,’” wrote a reporter for Australian music station Triple J.

It wasn’t until after SNL, when I fully immersed myself in the studio version of “Good 4 U,” that I came to appreciate how savvy the song is.

The track is full of ear candy. It opens with an uncluttered five-note bassline, played by Rodrigo’s producer-cowriter Dan Nigro, that’s a hook all by itself. It’s quite possibly my favorite bass kickoff to a song since Selena Gomez’s 2017 hit “Bad Liar”—and unlike Gomez, Nigro and Rodrigo aren’t sampling their bassline from Talking Heads. There’s a little vocal stinger—a multivoiced female sigh, likely an overdubbed pile of Rodrigos—that connects the track sonically back to the dreaminess of “Deja Vu” without copying anything. The verse lyrics are syncopated to tumble out of Rodrigo’s mouth. This song may not be rap-rock, but Olivia has flow. The chorus has the kind of pop symmetry Max Martin would endorse: “Well, good for you!/ You look HAP-py and/ HEAL-thy/ NOT me!/ If you ever cared to ask.” And then, heading into the bridge—I’m going to credit mix engineer Mitch McCarthy with this—there’s this three-note guitar riff that’s allowed to ring out by itself before the full guitar solo starts, a kind of classic-alt-rock dopamine rush I haven’t heard since … maybe the Gin Blossoms?

Please forgive my old-school referents. Like Rodrigo’s “Drivers License,” which had music critics, this No. 1 hits columnist included, drawing comparisons ranging from Taylor Swift to Lorde to Billie Eilish, “Good 4 U” has enough signifiers baked into it to make scribes reach for their rock encyclopedias. The song’s punk-turned-pop feminine energy evokes 2021 Rock Hall inductees the Go-Go’s or the ’90s alt-grrrl stylings of peak Alanis Morissette. At NPR Music, critic Lindsay Zoladz makes a strong argument that Rodrigo’s new album Sour, most especially “Good 4 U,” is mining an emo and pop-punk vibe, channeling such Millennial-beloved all-male bands as Brand New or New Found Glory. Zoladz and several other critics, including Alexandra Fiorentino-Swinton in Slate, also hear Rodrigo reaching for first-wave Avril Lavigne, thanks in part to Olivia’s plaid-pants-and-pocket-chain stylings during her SNL performance of “Good.” (That outfit was the clearest sign of what era Team Rodrigo wanted to evoke; all that was missing was a dangling necktie.) But given that Rodrigo was only born in 2003, many online observers have pointed out that her likeliest inspiration isn’t any of these pre-2005 hitmakers but rather Paramore-frontwoman–turned-soloist Hayley Williams. Indeed, there are some rather damning mashups already making the rounds on YouTube asserting that “Good 4 U” is basically a rewrite of Paramore’s moshworthy 2007 hit “Misery Business.”

Regardless of how much she borrowed from past generations of rockers and popsmiths, Rodrigo has already achieved something exceptional in just three singles: early status as Gen-Z’s most versatile new artist. The opening-week stats for “Good 4 U” are pretty remarkable. At radio, it already ranks 33rd at mainstream pop stations—even as “Deja Vu” and “Drivers License” are both still in the pop-radio top 20. Only Ariana Grande is working this many singles at Top 40 radio right now. In digital sales, “Good” ranks fifth in its first week, with 12,000 downloads sold—not as explosive as the arrival of “License” in January but about 60 percent higher than the first week of “Deja Vu.” And Rodrigo’s streaming numbers are most impressive—in a week where returning rapper J. Cole dropped his new album and dominated the streaming services with a panoply of tracks, Rodrigo’s new single beat all of them, with 43 million streams. A significant chunk of Rodrigo’s streams likely came from YouTube, thanks to the song’s Bring It On–meets–Natural Born Killers video, which is queasily watchable.

Audiences have bought in fully to the Olivia Rodrigo brand. Which is … what, exactly, if the songs all sound different? Rodrigo is surely aspiring to the stylistic breadth of her hero Taylor Swift—who, come to think of it, made her own move toward punk-inspired pop way back in 2012 with the Martin-produced “We Are Never Ever Getting Back Together.” But Swift generally sticks to one stylistic palette per album (e.g., country, electropop, indie) and instead shows off her breadth in the range of the songs under that sonic umbrella. With the understanding that Rodrigo is still starting out and forging her identity, what is drawing audiences to her varied material so soon?

If we’re going to draw parallels between what Rodrigo is doing and all of her 21st-century forbears, perhaps we should compare her to one of the best-branded superstars of all: Adele. Until the British megastar deigns to bestow upon her worshippers a followup to her 2015 smash 25, Rodrigo is our reigning Queen of Heartbreak. In his very upbeat review of Rodrigo’s debut album, my Slate colleague Carl Wilson makes it plain: “Sour is a breakup album through and through. It treats the subject in a variety of styles, from folkie strums to shouty rants to tracks with a bit of groove. There are also plenty of recurring references to suggest the songs are all about the same split-up.”

Hmm … a single album all inspired by one cad who broke the artist’s heart … sound familiar? And the thing about the multiple chart-toppers on 21 was they also ranged fairly broadly within Adele’s soul-pop idiom: the modern Aretha of “Rolling in the Deep,” followed by the stark piano-only ballad “Someone Like You,” followed by the midtempo torch song “Set Fire to the Rain.” OK, there’s no punk song in there (though having watched enough foul-mouthed Adele, I’m sure she could pull it off), but what connects the song is both Adele’s voice and her voice—i.e., her wounded persona as presented in the lyrics. This is exactly what Rodrigo is doing across her hits: “Guess you didn’t mean what you wrote in that song about me” (from “License”) begets “I made the jokes you tell to her when she’s with you” (from “Deja Vu”) begets “Remember when you swore to God I was the only person who ever got you? Well, screw that, and screw you!” The progression from wounded to wafty to wrathful is the most natural thing about this succession of singles, and it’s clearly as addictive to the public as the story installments Charles Dickens used to publish in the newspaper week by week.

There’s no question “Drivers License,” among the songs Olivia Rodrigo has issued to date, is the song for which she is best known. Depending on where she goes from here, it may well be her legacy. But the reason I said at the top that “Good 4 U” might wind up being even more important to her emerging narrative is that it confirms that Rodrigo is the real deal, to both her audience—two No. 1 debuts, out of three immediate Top 10s, is a stunning career-launcher—and the music business. The music-industrial complex is already foreshadowing that the 2022 Grammy Awards may well be The Olivia Show, much the way the 2020 awards were The Billie Show and the 2012 awards were The Adele Show. When and if this seeming inevitability comes to pass next winter, remember that Rodrigo went from talented fluke to capital-A Artist the moment she proved she could both cry out and rock out.