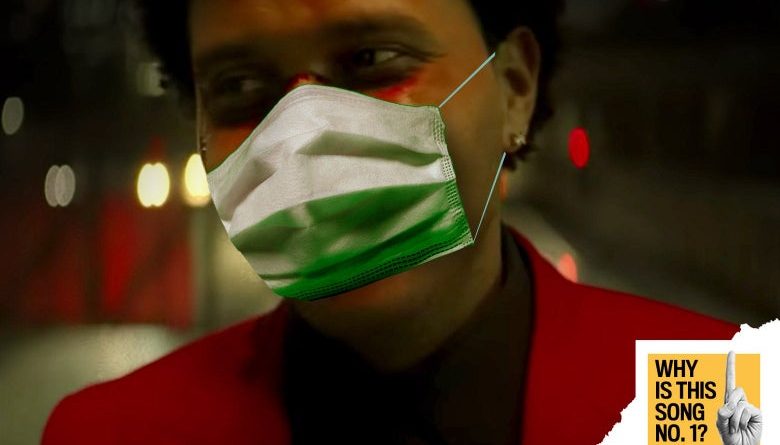 Chic’s legendary dance hit “Good Times” topped the Billboard Hot 100 in 1979—the final year of disco’s peak, and also the peak of the oil crisis and record U.S. inflation. In interviews over the years, Chic co-founder Nile Rodgers has argued that his group’s seemingly frothy music was ideal for its cultural moment. “The country was undergoing the worst economic depression that it’s seen, like, since the Great Depression,” Rodgers said. “So when we wrote ‘Good Times,’ what did we do? We went back to the Great Depression. … The lyrics are, ‘Happy days are here again.’ ”

So I must say, I wasn’t all that surprised when—about three weeks ago, when the COVID-19 pandemic overtook our way of life and decimated the U.S. economy—the two songs racing to take over the No. 1 spot on the Hot 100 were both effervescent, throwback dance singles. And I mean very specific throwbacks: Dua Lipa’s directly Chic-inspired, late ’70s disco reboot “Don’t Start Now,” and the Weeknd’s glossy ’80s synth-pop homage “Blinding Lights.” By the end of March, Lipa’s irresistibly bass-happy song had reached No. 2 on the big chart, and for the past four weeks, it’s been the most-played song at U.S. radio. But the big win was scored by “Blinding Lights,” which, powered by streaming and downloads, became the nation’s new overall No. 1 song last week. Go figure—the hit that ultimately prevailed in this dance-pop faceoff is the one with the video that leads off with the singer’s bloodied face and the lyric, “I’ve been on my own for long enough.” Man, I hear you, Abel.

That would be Abel Tesfaye, aka the Weeknd, owner of said bloodied face. It’s a look he was committed enough to perform in—complete with nose bandage—on Saturday Night Live on March 7, the last SNL episode before the show was shut down due to the coronavirus. “Blinding Lights” is the second single from the Weeknd’s just-issued, blockbuster album After Hours—whose cover is also a photo of Tesfaye’s bruised-and-bloodied face (more on this imagery in a moment)—and it’s now the album’s second consecutive No. 1 song, following “Heartless,” which rang the bell back in December. “Lights” is also only the second new Hot 100 No. 1 of 2020, as it last week ejected Roddy Ricch’s “The Box” from the top spot. Ricch’s viral sensation wound up spending 11 weeks on top, a run that dated all the way back to mid-January—that relatively carefree time.

In many ways, “Blinding Lights,” too, is a product of the Before Times. It’s been around nearly as long as its predecessor “Heartless,” having been teased in a Mercedes-Benz commercial starring Tesfaye just before Thanksgiving and released on streaming services a couple days later. Tastemakers took to the song quickly enough that it made some 2019 year-end critics’ lists, like Stereogum’s, even though it was just days old. It debuted on the Hot 100 a couple of weeks before Christmas but then bumped around the middle of the chart for weeks into the new year, as “Heartless” received all of the initial promotional and radio focus. “Lights” didn’t finally crack the Top 10 until around early March, just as everything in our country was going to hell. Of course, the Weeknd has long been a fervent chronicler of fiery hellscapes.

Seriously, I don’t think “Blinding Lights” is the No. 1 song right now just because Tesfaye is an expert purveyor of spooky music. I don’t even think it’s on top because of all that bloody imagery; “Heartless” hit the top back in December, and its video also trafficked in disturbing tropes. No, “Blinding Lights” is the chart topper for our time of lonely lockdown because, however accidentally, the Weeknd found the ideal midpoint between glossy and eerie, between danceable and dark. It’s “Good Times” for the baddest of bad times.

Speaking of bad times, a word about all that blood pouring out of Tesfaye’s head. The “Blinding Lights” video is part of a series of interconnected “short films” issued to promote the new album. In the sleek “Lights” chapter, Tesfaye’s red-suit-jacketed lothario character—having previously gotten trashed on a Vegas bender in the “Heartless” clip—gets behind the wheel for a heedless joyride that … somehow winds up with him getting the crap beaten out of him by a pair of thugs in a club? (Given the way Tesfaye was driving, he probably had it coming.) Don’t work too hard to make heads or tails of the plot—some bloggers have tried—and if you find the violence a bit grim, you really won’t want to watch subsequent chapters, including “After Hours,” which brings in a supernatural horror storyline, or “In Your Eyes,” which goes full Grand Guignol, complete with a character dancing with a severed head.

In an in-depth Variety interview, Tesfaye sees the video series as comically absurd and wants it to be cinematic but not necessarily decipherable: “I don’t like to explain too much.” It’s of a piece with his After Hours album, which he says is an homage to the 1985 Martin Scorsese film of the same name, whose madcap, pitch-black, comic adventures all happen to poor Griffin Dunne in a single crazy night. The cinema has been very good to the Weeknd. His first smash single as a lead artist back in 2015, the Oscar-nominated “Earned It,” came from the soft-core blockbuster Fifty Shades of Grey. And in December, just as the After Hours promotional cycle was kicking in, Tesfaye appeared as himself—an extreme, coke-addled and girlfriend-macking version of the Weeknd that I’m not sure is satire—in the Safdie brothers’ hit Adam Sandler indie Uncut Gems, whose story also mirrors the After Hours video series’ hyperbolic, one-damned-thing-after-another excess. Say what you will about the Weeknd’s latest body of work, the #branding has been well coordinated.

OK, but what about the, um … (checks notes) music? In my December article on “Heartless” for this Slate No. 1 hits series, I took the Weeknd to task for phoning it in musically and thematically, recycling downbeat R&B and party-monster lyrical tropes he’d been mining for an entire decade. In the subsequent months—in a pretty typical pattern nowadays, where radio programmers take their cues from streamers—“Heartless” evolved from a streaming-driven Hot 100 chart topper to an actual radio hit, but my opinion didn’t improve much. (Even with its lyrics reducing women to genitalia censored for radio, the song was still a drag.) But “Blinding Lights”? It’s hard not to be charmed by it. Tesfaye has reached back to the ’80s plenty in his career, but even by his standards, the Gary Numan–slash–Human League synth sheen of “Lights” is the deepest he’s gone into Reagan-and-Thatcher-decade musical construction, a tight three and a half minutes of Miami Vice bliss (the speeding-car video even recalls Vice).

It helps that Tesfaye crafted a stronger-than-usual song. He started off writing it himself—with help from longtime Canadian colleagues Jason “DaHeala” Quenneville and the rapper Belly—but then enlisted grade‑A experts to finish it: the Swedish workshop of 21st-century pop mastermind Max Martin (including Martin’s fellow Swede craftsman Oscar Holter). From its scale-laddering verses to its tension-filled chorus, the song exhibits the polish and “melodic math” for which Martin is renowned. This is the first I’ve mentioned the mighty Martin in this series in four years, as “Blinding Lights” breaks an anomalous dearth of No. 1 hits for him as a writer-producer, after the 2016 Justin Timberlake smash “Can’t Stop the Feeling!” Since Max broke in the late ’90s alongside Britney Spears, he has had only two fairly brief multiyear fallow periods, and both were chart cycles dominated by hip-hop: the early-mid ’00s (Martin could not compete with the likes of 50 Cent and Lil Jon) and the late ’10s (the age of Drake and Post Malone). The Weekend is pretty much the only artist classed (broadly) as R&B that Martin scores big hits with, so it figures that Tesfaye would be the vehicle to break the hit-maker’s latest drought—although the charts’ swing back to pure pop over the past year didn’t hurt his prospects, either. For my fellow pop nerds keeping score, “Blinding Lights” pushes Martin’s career total ever closer to the Beatles trifecta of producer George Martin and songwriters John Lennon and Paul McCartney: Billboard reports he’s two away from tying Sir George, three away from Lennon, and nine away from McCartney.

Maybe the sumptuous “Blinding Lights” would’ve been a hit at any time of year. But finally, it was its irresistible synth hook that made it—folks, you knew this was coming—TikTok-able, the chart-topping linchpin of our moment. A predictably hashtagged #BlindingLightsChallenge picked right up where the Roddy Ricch-inspired series of “eee err” TikTok videos left off. Taking over social media just as we all began social distancing, the challenge comes complete with its own dance: a tightly controlled, ’80s-derived, arm-pumping and swinging-kicks routine—picture Molly Ringwald in The Breakfast Club—that can be done either solo or, preferably, in formation with the small group of family members or fellow hospital workers with whom you’re sharing quarantine.

Sure, it’s possible, and perhaps even likely, that Team Weeknd fomented this dance challenge even before the coronavirus took hold. (The label would have strong incentive. To recap something I said when both Lil Nas X and Roddy Ricch hit No. 1: TikTok doesn’t count directly for the Hot 100, but its knock-on effects on streaming, YouTube, and, eventually, cool-hunting radio programmers do fuel chart performance.) Maybe if Team Dua Lipa had concocted their own disco-dancing challenge, “Don’t Start Now” would be No. 1 right now—it’s an absolutely killer dance song, but it’s not a song that invites a very specific style of dancing. Whereas the very Teutonic, Sprockets-style rhythm of “Blinding Lights” all but invited such formalist dancing while we’re all stuck indoors. And I must say that, at this moment, the “Blinding Lights” dance is kind of exhilarating: the rigidness of our COVID-19 panic crossed with an impossible-to-contain need for bodily abandon.

So in an album campaign that has been tightly controlled since last fall, what finally gave the Weeknd his fifth career No. 1 on the Hot 100 was something he couldn’t entirely control. His gory, slick music video isn’t half as fun to watch as these dozens of phone-cammed videos of families bouncing into their rec rooms and flailing their arms and legs together. In his Variety interview—captured both before and during our current, anxious moment—Tesfaye attests that he never considered delaying his new album. “I felt like I had to deliver it,” he said. “I knew how important it was to my fans.” That’s pop-star boilerplate, but the real reason “Blinding Lights” is sitting on top right now has more to do with thousands of traumatized new fans, who are dancing deliriously to a song by the Weeknd for the first time in their lives.