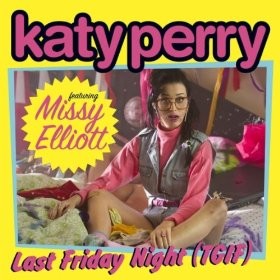 Chart fandom makes strange bedfellows. Six months ago, if you’d asked me what act I’d root for in a head-to-head chart battle between pop princess Katy Perry and electrodance goofballs LMFAO, I’d probably have picked Perry, whose song catalog includes at least one or two gems. Her current hit, “Last Friday Night (T.G.I.F.),” isn’t one of her best—it’s nowhere near as well-crafted as “Teenage Dream” or “Hot N Cold”—but it’s a charming, goodtime trifle, and marginally less stupid than LMFAO’s “Party Rock Anthem.”

Now? I’m rooting for the goofballs over the princess all the way.

LMFAO’s single (which, to be honest, has kinda grown on me) is the last firewall standing between Perry and her fifth Hot 100 No. 1 from Teenage Dream. Were “Friday” to hit that mark, Teenage Dreamwould tie a record that has so far only been reached by one album: Michael Jackson’s Bad. Perry and her people are trying to hit that mark by cheating… or, to be fair, by taking advantage of a legal but shady tactic.

On Monday, Capitol Records dropped a new remix of “Last Friday Night” featuring long-in-the-wilderness hip-hop queen Missy Elliott. Other than a bit of noisy folderol at the front of the track, Elliott doesn’t add much to Perry’s ’80s homage—but, hey, the new mix is on sale at iTunes for the rock-bottom price of 69 cents.

This is Perry’s last-ditch effort to get “Friday” past LMFAO and their chart-topping “Anthem,” now in its sixth week atop the Hot 100. Scoring a fifth No. 1 hit from her 2010 album Teenage Dreamwould vault Perry into the all-time pantheon alongside Jackson—1987’s Bad spawned the 1987-88 No. 1’s “I Just Can’t Stop Loving You” (with Siedah Garrett), “Bad,” “The Way You Make Me Feel,” “Man in the Mirror” and “Dirty Diana.” Perry’s Dream has so far spawned the 2010-11 penthouse-dwellers “California Gurls” (with Snoop Dogg), “Teenage Dream,” “Firework” and “E.T.” (with Kanye West). Currently stuck at No. 2 for a third week, “Last Friday Night” needs to get past LMFAO to give her the quintet.

Obviously my bias toward Jackson is showing here, and to be honest, not even half of those Bad chart-toppers are classics. (When’s the last time the snoozy “Just Can’t Stop” wafted into your life?) But part of what’s objectionable about Perry’s chart feats is her repeated use of non-album remixes to go the distance—something Jackson never did in his heyday. Anyone buying her album isn’t getting all of the hits as they actually topped the charts or blanketed the radio.

On Perry’s album, “E.T.” didn’t sound much like a hit; it’s been widely reported that she had to nudge her label to even consider it worthy of single release. But when fortified by a drive-by Kanye West cameo, the track skyrocketed on iTunes and, subsequently, the Hot 100. The rethink of “Friday” is even shadier. Dropping the Missy mix a full three months into the song’s chart life smacks of desperation and dirty pool; at least with “E.T.,” the label issued the West remix at the start of the song’s radio campaign.

The thing about these late-inning remixes is, they usually work. In April, Rihanna’s single “S&M” was languishing on the Hot 100 at No. 2 (behind Perry’s “E.T.”), before a suddenly issued Britney Spears “Rih-mix” nudged the song to the top of the Hot 100 for a single week. A couple of weeks later, Britney herself benefited when her “Till the World Ends” received a “Femme Fatale Remix” with vocals by Ke$ha and a rap verse by Nicki Minaj. The resulting single-week iTunes boost lifted “World,” briefly, to the No. 3 spot. Both remixes’ guests were generally wasted, and both releases reeked of a needless cash grab (especially on Spears’s already-excellent single, one of her best recent tracks). But enough pop completists bought the remixes that they had their desired chart effect.

All over the Internet, the Perry/Missy remix has pop geeks like me—folks who follow pop as an inside-baseball sport, not just as, y’know, music—up in arms. Check the reviews on the “Friday” remix’s iTunes page and you’ll find this disparagement from netsrock115: “This is a sad attempt at getting a #1. It’s really bad too, don’t buy it.”

Over at Yahoo! Music’s Chart Watch page, veteran chart columnist Paul Grein is leading a lively discussion not only of the worthiness of Perry’s potential feat, but whether Elliott’s cameo should even qualify her for full Hot 100 credit. Grein is calling on Billboard to “reconsider [their] policy” on counting such mid-chart-life credits, “as it dilutes the impact of a legitimate top 10 hit…To get permanent credit for a top 10 hit for a relatively minor involvement with a record is the chart equivalent of grade inflation.”

Even if you’re a Missy fan, you might not want “Friday” toted in her column—she’s never scored a No. 1 Hot 100 hit. In 2001, Elliott wasn’t credited for her production work and brief vocalizing on the chart-topping, multi-diva “Lady Marmalade” remake; and in 2002, her own “Work It” stalled at No. 2. (For 10 weeks!) Finally seeing the revered rapper’s name atop the Hot 100 alongside Katy Perry’s, for a second-rate remix, would be rather sad. That’s if “Friday” makes it to No. 1 next week, which is far from a foregone conclusion. (More on that in a moment.)

While I side emotionally with the anti-“Friday” brigade, the sad fact is, the half-century history of the Hot 100 is littered with examples of songs that achieved major chart feats through gaming the rules. And not all of these songs are as undeserving as Perry’s remix. My favorite example, in fact, involves two of the best rock singles of all time, by the best band of all time.

In 1969, the Beatles led off the promotional campaign for their final recorded album, Abbey Road, with a “double-A-sided” 45-RPM single pairing the John Lennon-fronted “Come Together” with George Harrison’s greatest composition, “Something.” Billboard‘s Hot 100 was just over a decade old, and throughout its history to that point, A-sides and B-sides charted separately. The Beatles themselves had scored several split hits under these rules: 1965’s “We Can Work It Out” reached No. 1, while its flip side, “Day Tripper,” made No. 5; 1967’s “Penny Lane” went to No. 1, while its classic flip, “Strawberry Fields Forever,” reached No. 8.

For reasons that are lost to history, Billboard decided at the end of the 1969 chart year to begin combining A- and B-sides of 45s into a single Hot 100 position. This would have gone unremarked, if it didn’t directly benefit the Beatles the very first week the new system went into effect: “Come Together”/”Something” rose instantly to No. 1.

As veteran chart analyst Fred Bronson chronicles in his Billboard Book of Number One Hits, as late as the week before the rule change, “it looked like neither side had enough strength to go to No. 1”; “Come Together” had gone as high as No. 2 before dropping back, and “Something” was stalled at No. 3. Billboard essentially gave the Beatles a bonus No. 1 hit (two at once, in fact). It’s hard to be outraged by this fact, given the unimpeachable quality of both songs, but it’s true.

Because the very concept of “B-sides” or “flip sides” is gone in the digital era, Billboard no longer wrestles with how to credit two songs that rise at retail at the same time. All songs now get one chart position, period. But for 40 years, it was a serious Hot 100 headache; Billboard changed the rules once or twice a decade.

By 1977, the Beatles-era rule had reverted back, forcing KC and the Sunshine Band’s single “I’m Your Boogie Man” and its flip, “Wrap Your Arms Around Me,” to chart separately (No. 1 and No. 48, respectively). Sometime before 1983, it had changed again, and Prince’s “Let’s Pretend We’re Married” and “Irresistible Bitch” shared a Hot 100 position in their short-lived chart run. It was reversed again by 1987, in time for Lionel Richie to chart separately with the ballad “Ballerina Girl” and its country-flavored B-side, “Deep River Woman.” The rule reversed yet again in the mid-’90s, and several acts benefited from a double-blast of combined A- and B-side data. In 1996, 2Pac and Toni Braxton scored their first No. 1 hits that way, the former with the combined “How Do U Want It”/”California Love” and the latter with “You’re Makin’ Me High”/”Let It Flow.” In 1997-98 Jewel even set a record (later beaten) for longest-lived Hot 100 single of all time, when “You Were Meant for Me” and “Foolish Games”—two songs that briefly shared cassingle space and really should have been tracked separately—were combined by Billboard into a 65-week chart run.

More recently, we’ve seen Billboard wrestle with how to chart songs that get remixed. In 2002, after Jennifer Lopez scored two back-to-back No. 1 hits (“I’m Real” and “Ain’t It Funny”) that were not only remixed but rerecorded from the ground up with totally new tempos and guest rappers (Ja Rule and LL Cool J, respectively), the magazine instituted a rule that remixes needed to retain core elements of the original song to be counted together with a song’s original mix.

A decade later, the labels are now confronting Billboard with the opposite problem: remixes, like Perry’s with Elliott, that change very little at all. No one’s claiming that sales of such remixes shouldn’t count toward the original single’s chart position; but giving Britney Spears full credit for a No. 1 hit in the middle of the Rihanna single’s chart run, or giving Elliott credit for Perry’s single so late in the game, seems, as Paul Grein would argue, cheesy.

Next week, we’ll find out whether the craven Elliott gambit pushes Perry to the top of the Hot 100. Delightfully, there’s some actual suspense over whether it will work.

“Last Friday Night” rose this week to the top of Billboard‘s Radio Songs chart, which tracks only airplay without sales—Perry’s latest now has the largest radio audience in America. But the Hot 100 combines this airplay data with digital sales, and at this writing Perry’s single appears to be faltering. The original mix of “Friday” is no longer in iTunes’ top five (as of this afternoon, it ranks sixth), and the Missy remix ranks 40that iTunes—a serious rebuke by the record-buying public to Capitol’s ploy.

That still doesn’t mean it won’t work. Billboard will combine the sales of all mixes of “Friday” into a single chart position, and even a modest-selling Missy remix could make up the gap for Perry’s single. In recent weeks, “Friday” has been selling tens of thousands fewer singles than LMFAO’s hit; this past week, the gap was nearly 50,000 downloads (185,000 for “Party Rock Anthem” vs. 136,000 for “Friday”). Generally, a 40th-ranked digital song at iTunes has been selling in the neighborhood of 40,000 to 45,000 copies this summer—just about the gap Perry needs to make up. These sales results will be combined with airplay on the Hot 100, and according to Grein at Yahoo! Music, Perry’s airplay lead over LMFAO this week is only about 0.1%. In short, this will be a photo finish.

If, by some chance Perry falls short with “Friday,” will it mean the late-inning remix gambit will die as a viable Hot 100 strategy for labels promoting their pop divas? Perhaps, and let’s hope so. I guarantee, however, that it’ll take just a few months for the labels to retool and come up with a new, chart-legal but fan-unfriendly tactic to score the hits they crave.