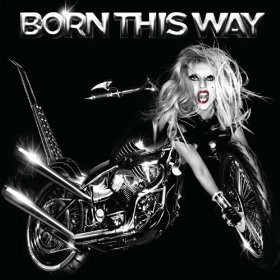 The phrase “the calm before the storm” appears in virtually every chart-related story this week. That’s because the latest edition of the Billboard 200, which covers sales from the week ending May 22, is topped by Adele’s 21. That album is No. 1 for the ninth and (presumably) final week before Lady Gaga’s monster Born This Way makes its foregone chart-crushing debut.

But, come on now… “calm”? For chart-watchers, industryites and Gaga fans, I’d say the storm is already happening.

A meta-discussion has been raging all week around just how many copies Gaga’s album will sell in week one, and whether all of the downloads she’s racking up should count. Amazon’s jaw-dropping decision to sell Born This Way for the unprecedented full-album price of 99 cents has not only engendered controversy—so much that Billboard‘s editor felt compelled to respond to some angry Britney Spears fans—it’s rocket-fueled Gaga’s sales.

The whispers began way back in February, after “Born This Way,” the song, made a massive debut, blasting in at No. 1 on Billboard‘s Hot 100 with blockbuster sales and airplay. Could the Born album become the first disc since Taylor Swift’s Speak Now (November 2010) to move a million in a week?

When subsequent Gaga singles like “Judas” and “The Edge of Glory” made less impressive debuts, forecasts were lowered correspondingly. This week’s Hot 100, for example, doesn’t inspire much more confidence: “Hair,” the fourth prerelease single from Born This Way, arrives at No. 12; if it goes no higher, it’ll be her first promoted single to fall short of the big chart’s Top 10.

According to Billboard, as recently as last month execs at Interscope, Gaga’s own label, were managing expectations down, calling for a first week of as little as 400,000 (great if you’re, say, Katy Perry; underwhelming for an act of Gaga’s cultural dominance). But after the album dropped this week, in the wake of the Amazon promotion and reports of massive sales at other retailers, that changed rapidly. “By Monday,” Billboard reports, “they were talking 650,000-700,000 units, and then moved it up to 800,000-900,000 units. It wasn’t until Wednesday that they began conceding the possibility of a million-unit week.”

Reviews for Born This Way have been almost uniformly strong. But first-week sales and early reviews aren’t necessarily a great yardstick for how an album will ultimately be regarded—or how it’ll sellῗover time. It will be months, perhaps years before we can properly assess the cultural imprint of Born This Way, as is true of the other albums that did blockbuster numbers out of the box.

Assuming, as Billboard itself now predicts, Born This Way moves more than a million copies by Sunday, Gaga will join a baker’s dozen of other artists who, during the 20-year SoundScan era, have shifted seven figures in seven days. This list of “million-weekers” ranges from the Beatles and Garth Brooks to Limp Bizkit.

Prior to 1991, it was virtually impossible to know whether albums sold a million copies in a week. Twenty years ago this month, Billboard introduced SoundScan data to its album chart, a B.C.-A.D. event so epochal music historians now refer to chart history in terms of “pre-SoundScan” and “post-SoundScan.” Acts that peaked in the pre-SoundScan era arguably got robbed—in 1990, Public Enemy were widely rumored to have sold a million copies of Fear of a Black Planet in its first week. But with no precise chart system (and record-store owners reluctant in the early days of hip-hop to report its sales fully), PE’s album only scraped the Billboard Top 10.

The last two decades have been far more accurately tallied, bringing us 16 albums recorded by SoundScan as shifting a million in a week. Here, ranked by the size of their sales, is the full list–16 discs by 13 artists (including three acts that each scored a pair of such albums). In parentheses are each album’s big one-week sales number and the Billboard chart date:

Yes, boy bands really were huge a decade ago. Yes, the music business really does wish it could travel back to the spring of 2000.

What do these blockbusters have in common? Most achieved their eye-popping feat in week one–13 of the 16, to be exact. (The exceptions: the Beatles and Whitney Houston titles rose to the million-weeker level after more than a month, following a huge infusion of Christmas sales; The Eminem Show made it in week two, after a leak forced it to debut a couple of days early.) Gaga’s album will join them, and like the other 13, Born This Way will surely never achieve that level again; no album has ever sold more than a million copies for more than one week.

What’s more interesting to consider is each album’s legacy. Is it still a major work in the act’s career?

The fact is, all 16 albums were following up previous best-sellers, many of which are better remembered today. Even before the advent of SoundScan, it was a commonplace that many acts’ first No. 1 album wasn’t their best-seller. (I call it the AC/DC rule: their first chart-topper, 1981’s For Those About to Rock, We Salute You, has sold about one-fifth as many copies as its No. 4-peaking predecessor, Back in Black.) In the SoundScan era, this pattern has only accelerated, as dozens of albums are now able to debut at No. 1 but peter out more quickly.

Of the 16 million-weekers above, only five wound up as the best-selling album of the act’s career: ‘N Sync’s No Strings Attached; Eminem’s Marshall Mathers LP; Usher’s Confessions; Whitney Houston’s The Bodyguard; and Lil Wayne’s Tha Carter III. In some cases, these million-weekers ultimately fell only a million or so short of the act’s best-seller—Backstreet’s 13-times-platinum Millennium is just shy of their 14-times-platinum, self-titled debut, for example. But in other cases, the million-weeker’s sales were heavily front-loaded. Backstreet’s Black & Blue did about one-third of its total business in week one and never made it past five-times-platinum, less than half of its predecessors’ sales. Norah Jones’s Feels Like Home stalled at four million, about one-third of what her slow-building 2002 debut ultimately sold.

These are the key works: slow build. Across chart history, most of the albums that made a lasting impact did it in bits and pieces. There are no million-weekers among the 10 best-selling albums of all time, and half of them—Led Zeppelin IV, AC/DC’s Back in Black, Shania Twain’s Come on Over, Boston and Garth Brooks’s No Fences—didn’t even top the album chart, not even for a solitary week. (Of the 25 all-time best-sellers, one album, Meat Loaf’s Bat Out of Hell, never made the album chart’s Top 10.)

In short, albums are rather like summer movies: the first-week blockbusters get a lot of attention, but the ones we remember insinuate themselves into our lives. Stefani Germanotta, of all people, knows this.

When Lady Gaga’s The Fame was released in the late summer of 2008, Interscope was in the middle of a yearlong campaign to break its first single, “Just Dance,” on the radio. Even after that megasmash topped the Hot 100 in the winter of 2009, The Fametook until March of that year to go gold, May to go platinum. Lodged in the album-chart Top 10 for the better part of two years, The Fame never rose above No. 2 and rarely sold more than 100,000 copies in a single week. But it’s now triple-platinum–a bar Born This Way should be able to equal but, as good as it is, may have difficulty surpassing.

For us chart geeks, SoundScan has been overwhelmingly good in terms of accuracy, precision and keeping this dirty industry honest. If there’s a dark side, it’s the overemphasis on splashy first weeks that accurate tallying has made possible. Gaga, who will get her first U.S. No. 1 album next week, has earned her week of blockbuster status (and her strong reviews), even if Born This Way never tops her debut in the hearts, minds and wallets of pop fans.