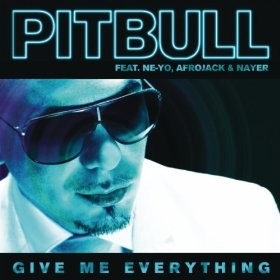 If, like me, you’ve been putting together your annual summer playlist to pump at block parties and barbecues, you may have found yourself with a historically odd problem: a relative dearth of hits this year by dudes. After you’ve rounded up buzzy tracks by the Queens of Pop—from Adele to Nicki Minaj to Robyn—you might find yourself hunting for worthy male vocals, just for diversity.

On the charts, the guys have reasserted control—at least for this week. Cuban-American club-rapper Pitbull assumes the throne on Billboard‘s Hot 100 with “Give Me Everything,” his first chart-topper. The Miamian born Armando Christian Pérez is the first lead male to top the authoritative song chart in, no joke, 20 weeks.

For Pitbull, it’s a case of patience and persistence: “Give” spent four weeks parked at No. 2 on the Hot 100 behind Adele’s “Rolling in the Deep,” which finally wanes after nearly two months on top. His overachieving track reached No. 1 with some unusual chart math. “Give” is neither America’s most-heard radio hit—”Rolling” is still tops on Billboard‘s Radio Songs list, with “Give” ranked second—nor the best-selling. “Give” is only fourth-ranked among digital songs for the tracking week, actually decreasing 7%; but, crucially, Pitbull’s 187,000 downloads outdid Adele by about 17,000 for the period. And none of the other competitors in the Hot 100’s Top Five right now managed to line up a combination of sales and airplay big enough to top Pitbull’s chart total.

As if realizing how tough an uphill battle he was facing in the pop wars of 2011, Pitbull came fortified on “Give” with two additional dudes: buttery R&B crooner Ne-Yo (whose vocal is the track’s best feature by far) and Dutch producer-DJ Afrojack. Plus, just in case, he brought along a decorative ladyfriend, model and hook-singer Nayer. Even with all that backup, Pitbull might be ejected in fairly short order—and possibly by a woman. (More on that later.)

The Hot 100 has become a ladies’ playground over the last couple of years. In 2010, just counting solo and lead females, gals held the No. 1 spot for just over half the year; throw in prominent female vocals, like Rihanna’s turn on Eminem’s “Love the Way You Lie” or Devin “Dev” Tailes’s big hook on Far East Movement’s “Like a G6,” and the 2010 total swells to 42 weeks, or an 81% female yield. At the halfway point of 2011, tracks by women have held the top a staggering 22 weeks, with all but one of those tracks featuring no men at all. The exception was the Kanye West-supported Katy Perry track “E.T.,” and it could hardly be argued that Ye’s goofy cameo was the signature element of that smash.

According to Billboard, this 19-week streak of lady dominance is tied for second-longest in Hot 100 history. Here were the other two streaks, both of which very prominently featured Mariah Carey:

That first, seven-month streak from 1995-96 is massive and seemingly indomitable, especially as it features “One Sweet Day,” whose 16 weeks in the Hot 100’s penthouse remains the longest stay at No. 1 by any single. There’s just one problem with that blockbuster hit: it’s a full-blown duet, billed equally to Carey and all-male quartet Boyz II Men.

Boyz, who in 1995 were at the apex of their popularity, provided more than support or hook-singing on “Sweet.” They were integral to that song, very unlike Kanye’s drive-by rap on Perry’s recent smash. So calling this 33-week period an all-gal streak is problematic, to say the least.

The 2005 streak was completely unsullied by men, as Stefani, Carey and newly crowned American Idol Underwood fronted their hits all by themselves. But this 19-week streak isn’t exactly a blow for sisterhood, either. Here again, Carey was the massive outlier, laying waste to everything in her path with the sterling ballad “We Belong Together,” that year’s top hit. Basically, this streak is Mariah’s 14 weeks decorated with flair, in the form of Gwen’s pseudo-rap fluke hit and Carrie’s short-lived, largely forgotten Idol souvenir.

I’d argue, then, that the 2011 female streak that just ended is much more indicative of women’s pop supremacy. Like the Mariah-Whitney-Celine streak of 1995-96, this year’s Gaga-Katy-Rihanna-Adele quartet features acts at or near the top of their game as artists and cultural colossi. As with the Gwen-Mariah-Carrie streak of 2005, in the 2011 streak, men are an afterthought.

Turning back to this week’s commanding man, one wonders how long Pitbull’s club-and-car-thumper will hold the top of the Hot 100. The digital download totals for “Give Me Everything” have likely peaked, and while the song’s airplay audience is growing, Pitbull has several competitors breathing down his neck for summertime radio dominance.

One major competitor is the even more summery “Party Rock Anthem,” by California electro goofballs LMFAO. Holding at No. 3 on the Hot 100, the track is already outselling Pitbull’s “Give” and, as of this writing, is the top-seller on iTunes. It’s also fourth-ranked at radio, just two positions behind “Give.” If those airplay totals keep rising and “Anthem” winds up as the week’s top download, the LMFAO dudes could evict Pitbull as soon as next week.

That is, if Katy Perry doesn’t get there first. Chart geeks don’t much care right now about either Pitbull or LMFAO; we’re all watching Perry, who may be about to tie a storied Hot 100 record. Last week, her “Last Friday Night (T.G.I.F.)” hurtled into the Hot 100’s Top Five, from No. 31 to No. 4. If “Friday” goes all the way, that’ll be the fifth chart-topper from Teenage Dream, making her only the second act in chart history to pull a quintet of No. 1s from a single album. The other? Michael Jackson, who scored five No. 1s in 1987-88 from Bad.

Perry’s nominally ’80s-inspired (but really kinda confused) “Friday” remains at No. 4 on the Hot 100 this week. That holding pattern masks the trajectory of the song’s underlying data. “Friday” has been the top-selling digital single for two weeks, and at radio she’s gone from 40th to 21st to 11th in audience in just the past three weeks. Assuming she hurtles into the airplay top 10 next week and keeps selling more than 200,000 downloads a week, Perry could steal a march on LMFAO and leap into the penthouse—if not next week, then the week after.

What would that mean? Well, Michael Jackson may not have been, to borrow his friend Eddie Murphy’s old phrase, “the most masculine fella in the world,” but he is the leading solo male in chart history. Seeing one of his many chart records eroded by a current pop demigoddess would be a far bigger encroachment by the ladies on the guys’ turf than anything Perry could do to Pitbull.