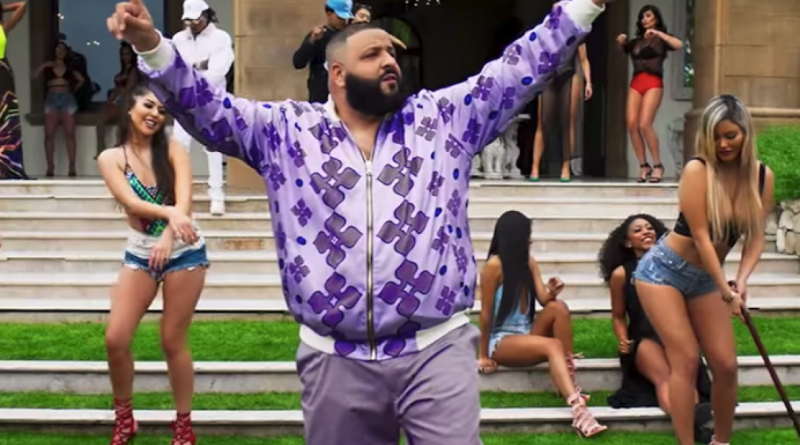 What if “We Are the World” wasn’t about feeding starving people? This month 32 years ago, America’s No. 1 song was nominally about helping to alleviate sub-Saharan famine, but what folks remember best about USA for Africa’s chart-topping 1985 single (and especially its video) was all the superstars getting their turn at the mic. Critics have been saying for decades that the charity megasingle was about the Western recording artists much more than it was about the beneficiaries of their good intentions—but what if the song was literally about the singers? Like, what if they called it “I Am the World”?

It’s 2017, and you have just described the new No. 1 song in America. With a shorter list of artists, but all the bloated egoism, the five-artist pileup “I’m the One” is credited to DJ Khaled (the single’s would-be Quincy), the Miami-based producer-cum-hypeman-cum–networker and party-starter. But “One” also features four pop and rap luminaries, each of whom gets his “We Are the World”–style star turn: Justin Bieber, Quavo, Chance the Rapper, and Lil Wayne. It’s the first-ever Hot 100 No. 1 credited to as many as five artists. (The previous record was four, on both the 2001 remake of “Lady Marmalade” by Christina Aguilera, Lil’ Kim, Mya, and Pink, and the 2011 Pitbull chart-topper “Give Me Everything” featuring Ne-Yo, Afrojack, and Nayer.) “I’m the One” is, in essence, the big pop chart’s first-ever No. 1 posse cut—a rap form with a long, rich tradition—as well as the posse cut’s ultimate bowdlerization, into an exercise in hip-pop brand management.

Say this for Khaled, he surrounds himself with A-listers—those four superstars have all topped various Billboard charts. In fact, two of them have led the Hot 100 just in the last year: Bieber, singer of the 2016 chart-toppers “Sorry” and “Love Yourself”; and Quavo, frontman for Lawrenceville, Georgia, trio Migos of “Bad and Boujee” fame. The other two are veteran rap legend Lil Wayne, who has topped Billboard’s album and song charts multiple times; and budding rap legend Chance the Rapper, whose “No Problem” (which, not incidentally, featured Wayne as well as 2 Chainz) topped the R&B/Hip-Hop Airplay list last fall. Get this many chart dominators together and put the word “One” in the song title, and it’s hard to see how it doesn’t ring the bell. Sometimes, the general public just does as it’s told.

They certainly were obedient on this one: “I’m the One” exhibited strength across all three Hot 100 metrics, slamming onto the list in the top slot, the second hit to debut at No. 1 this year after Ed Sheeran’s “Shape of You.” Billboard reports that Khaled’s cluster-bomb of a single is the best-selling digital song of the week, with a solid 171,000 downloads; it’s also a potent new entry at radio, already up to 35 million in audience; and it’s positively gargantuan on streaming services, with 54 million streams across on-demand audio and video services for the week. With its pool-party video and beach-blanket-bingo vibe, the song is also a shameless bid for 2017 Song of Summer status, dropping during the same late-April window when Drake’s summer 2016 dominator “One Dance” materialized atop the charts last year.

Honestly, shameless describes the product top to bottom. Consider the “I’m the One” video, a new low in commercial rap solipsism and crassness. The hilarity begins in the opening scene, which finds Khaled roaming the grounds of his compound alongside a bikini-clad woman on horseback. He’s letting us in on a very exclusive cellphone call with Chance the Rapper—effectively doing plot exposition for the music video you’re about to watch, a video that has no actual plot: “Chance, what’s goooood? Bless up! [Khaled pauses after his catchphrase as if Chance is actually on the other end of the line, talking.] Of course! Please do me a favor—do me the biggest favor … matter of fact, do yourself the biggest favor. Let Justin Bieber know, let Wayne know, and let Quavo know: MY HOUSE—we gonna celebrate LIFE. SUCCESS. And our BLESSINGS.”

The video then cuts immediately to a shot of a callipygian woman’s jiggling posterior, which apparently is among said blessings. Many other barely clad “blessings” populate the property’s patio, pool, and grounds, as Khaled and his dear, dear friends take their verses. Shameless product placements in the video include long, loving glances at Khaled’s earbuds (from a certain company owned by Apple), at least three brands of liquor (one of which, to be fair, might just have been the hooch Weezy brought to the shoot for himself), and a line of vaporizers called Kandy Pens. The whole thing is an unwitting reenactment of the Roots’ satirical 1996 “What They Do” video two decades later, minus the irony.

I should note that there is a song here, if not much of one. “I’m the One” is a whisper of a single, built on a sluggish, sub–DJ Mustard 808 thump, a digital fingersnap, and a thin, squealing trap synth line. Charitably, one might call the song uncluttered by design, leaving plenty of room for the vocalists to spit their verses. Of course, there isn’t much spitting per se. In what you might call the final triumph of sing-rapper and pop pacesetter Drake—who hovers over this record even though he’s not on it—zero of the five artists in “I’m the One” performs a full, melody-free rap. That includes the three actual rappers: Quavo and Wayne, both heavily Autotuned but unmistakably singing, as well as Chance, who at least croons decently enough to get by without overtly processed vocals. Khaled is the only one doing anything rap-adjacent, which consists of chanting his name and the song’s title. That leaves Bieber, basically the song’s Ashanti, to carry the hook, and accordingly he gets the song’s catchiest bit: a pair of cascading melodies that don’t exactly tax Justin’s range and a refrain that, like the video, is about getting paid: “Yeah, you’re lookin’ at the truth, the money never lie, no/ I’m the one, yeah, I’m the one.”

Virtually everybody here is phoning it in, the summer-music equivalent of an Adam Sandler summer aging-buddies flick like Grown Ups 2. The song even has the faint whiff of a sequel, since Khaled and Wayne teamed up six years ago on a similarly titled and vastly superior posse cut, “I’m on One,” which featured a young, hungry Drake and was until now Khaled’s biggest pop hit (No. 10). This is what Khaled does, with his uncanny talent for serving as hip-hop’s Jay Gatsby: opulently throwing the party, rather than actively participating in it. Starting as a hip-hop radio DJ in Miami at the turn of the millennium, Khaled eventually started glomming onto crews like Terror Squad, the Fat Joe–Remy Ma group responsible for the 2004 No. 1 “Lean Back”; Khaled appears briefly in that song’s video even though, as one critic notes, he “does literally nothing” (Khaled wasn’t even the song’s producer). Starting in 2006, over the next decade Khaled issued roughly an album a year stuffed with four-, five- and even six-rapper pileups, in repeat collaborations so multifarious Wikipedia has resorted to a bespoke chart to keep track of them all. One year ago, Khaled finally scored his first No. 1 album, Major Key, more than a decade into his career as rap’s summit organizer. With “I’m the One,” he’s now scored his first No. 1 single at age 41.

So if Khaled isn’t above a track as cheesy as “I’m the One,” the question here is who’s slumming the most. In other words, who’s the Chris Rock to Khaled’s Sandler? It’s probably Chance the Rapper. This is his first No. 1 pop hit—his first Top 40, actually—and it’s telling that Khaled chooses Chance for his faux phone call at the start of the video, as if implying that he’s seducing young Chancelor Bennett. By Chance’s own admission, he is thrilled to have a No. 1 hit, but one year after winning multiple Grammys, topping numerous critics’ lists and taking the consensus Best Rapper Alive title, Chance is basically here to make it rain. This is also Quavo’s first No. 1 as a soloist, not counting his Migos chart-topper of just four months ago, and he’s the Kevin James of the bunch; one can’t begrudge him grasping at his newfound A-list status after years of toil in rap’s lower tier. For Lil Wayne—the gang’s David Spade—this is a pretty big comeback: his first Hot 100 No. 1 since a supporting turn on Jay Sean’s “Down” nearly eight years ago. Weezy has scattered his prodigious talents across hits both mighty and meager for more than a decade; and given his long wilderness period after a protracted fight with his label and mentor Birdman, it’s kind of nice to see Wayne in the mix again, even on a single this slight.

The big get for Khaled is Justin Bieber, the main reason this single sailed to No. 1 on impact. (Bieber’s star power is such that it’s as if Sandler somehow got Ryan Gosling to guest in Grown Ups 3.) “I’m the One” represents the culmination of a two-year reinvention of Justin’s career. Two summers ago, when he came back from his own wilderness period of bad behavior and serial arrests with the seminal Skrillex–Diplo electronic dance track “Where Are Ü Now,” Bieber rebooted his career in two ways. In the immediate term, he became a reliable chart-topper as an EDM-pop act, scoring his first Hot 100 No. 1 in fall 2015 with “What Do You Mean?” In the medium term, and more unexpectedly, he has replicated his success as a hook boy for a flotilla of electronic pop hits. Just since last summer, Bieber has returned to the Top 10 as a featured singer three times: on another Diplo hit, Major Lazer’s electro-pop thumper “Cold Water” (No. 2, August 2016); on DJ Snake’s midtempo ballad “Let Me Love You” (No. 4, October 2016); and—just in the last month—on a remix of Luis Fonsi and Daddy Yankee’s reggaeton smash “Despacito.” Prior to its remix, the latter track had already dominated Latin radio for months, but after Justin sprinkled his Spanglish fairy dust, “Despacito” vaulted into the pop Top 10, becoming the first mostly Spanish hit in the Hot 100’s upper decile since Los Del Rio’s “Macarena” 21 years ago. This week, the “Despacito” remix is sitting at No. 3, two spots below the DJ Khaled single Justin graces with his special radio sauce—Bieber’s fourth straight smash as a featured vocal in under nine months and now his biggest to date.

It’s just a pity this makeshift crew rings the bell with a song that’s nobody’s best work, a track that feels inorganic and plainly premeditated to win the year’s jeep-bumping title by default. Plus, at a time when the charts are becoming overly male, with literally all of the chart-toppers of the Trump era to date led by men, it would be nice to see fewer women cavorting in the background at DJ Khaled’s mansion and at least one taking center stage. It’s not even Memorial Day yet—surely there’s time for a lady, any lady, to front a baldfaced pitch for summer-song dominance. Come back, Iggy Azalea, all is forgiven.