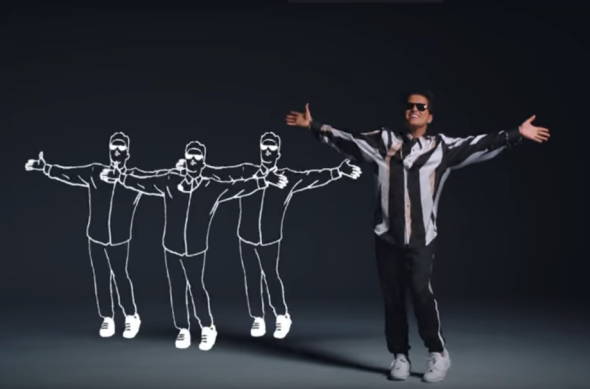 About four months into 2017, we know who music’s reliable headline-grabbers are: Kendrick Lamar. Ed Sheeran. Drake. Future. The Weeknd. Those danged Chainsmokers. A string of viral, heavily streamed rappers. All have topped the Billboard charts so far this year—either the Hot 100 song chart or the Billboard 200 album chart.

But this week, a veteran superstar—a hit-maker longer than all of the above pop and rap idols—sneaks under the radar and into the Hot 100’s No. 1 spot. The song is “That’s What I Like,” and its co-writer and recording artist is Bruno Mars, who, at 31, is not actually all that old. The most consistent male pop star of the 2010s, Mars first topped the chart seven long years ago (to the week) and should, in theory, be well past his prime by now. (When the Beatles passed the seven-year mark as recording artists, they broke up.) And yet it’s Bruno—not some young lion like Lil Yachty or Lil Uzi Vert—who comes out on top in a very competitive top 10. Even more improbably, Mars rings the bell with the second single from a nearly six-month-old album, one whose first single fell short and which itself couldn’t top the album chart. In this age of streaming dominance, viral hits, and front-loaded event albums, that’s not how the charts work anymore.

For those of us who remember the slower-building pop hits of old, it’s heartwarming to see Bruno pull this off, and with a single as bright and exuberant as “That’s What I Like.” The song itself sounds like decades past: a pastiche of ’80s-into-’90s styles like New Edition pop-and-B and New Jack Swing, crossed with the skittering, thumping 808 drums of a modern trap jam. Critics have compared “Like” to vintage R. Kelly, but more than anything I hear peak Bobby Brown, particularly in Mars’ straining, high-register vocal. As I noted in a recent episode of The Gist—while discussing Mars’ late-2012 chart-topper “Locked Out of Heaven,” a knowing homage to the Police—“vintage-sounds pastiche” fairly describes the bulk of Mars’ hits. “That’s What I Like” joins such Mars smashes as the Sting homage “Locked Out of Heaven”; the Michael Jackson homage “Treasure”; the Mars-penned, Cee-Lo–recorded Motown redux “Fuck You”; and the Mark Ronson–fronted, Gap Band–biting “Uptown Funk!” among Bruno’s catalog of reupholstered jukebox modes.

That last hit, the Ronson team-up, was Bruno’s most recent No. 1 until now and also the biggest of his career: a 14-week chart-topper in the winter and spring of 2015. “Uptown Funk!” was such a monster hit that when Mars returned in late 2016 with his own album 24K Magic, it appeared he hadn’t escaped the shadow of “Funk.” The album’s title track, its first single, was plainly a sequel to “Funk” with many of the same synth-funk and call-and-response signifiers. (One of its opening lyrics was “Guess who’s back again?”) That been-there-aped-that sound might explain why “24K Magic” was a lesser hit, peaking at No. 4 around Christmas—the first leadoff single from a Mars album to fall short of the No. 1 spot. Yet it’s a hallmark of Mars’ consistency that the 24K album sold well anyway: After debuting at No. 2 in December, it has never ranked lower than No. 7 on the album chart and has sold a cumulative 850,000 copies. (That’s actual sales—it has streamed even more than that.)

So how did “That’s What I Like” pull off that Hot 100 coup? In part, Mars got lucky, catching a week when his prime competition fell off a bit. “That’s What I Like” first broke into the top 10 in February, the week after Mars performed it live on the Grammy Awards. It sat in the top 10 for all of March and April, getting as high as No. 2 (for four weeks total) behind Ed Sheeran’s 12-week chart-topper “Shape of You.” But “Like” never seemed to have the juice to go the last mile—by late April, Kendrick Lamar’s “Humble” had debuted in the top three and, in its third week, actually leapfrogged Bruno into the No. 1 slot. But Mars played rope-a-dope, hanging in until Sheeran’s and Lamar’s singles wore themselves out. As Billboard reports, “Like” isn’t actually the top performer in any of the metrics that comprise the Hot 100: streaming, sales, or radio. It ranks fifth in streams, with a solid 39.5 million for the week; it ranks second in sales, shifting a modest 78,000 downloads; and it ranks second at radio, with a strong 165 million in audience. Mars’ airplay audience is smaller than Sheeran’s, and his streams are way off Lamar’s—but with Sheeran waning in streams and Lamar’s airplay still building, “Like” floats to the top.

It’s the Bruno Mars story in a nutshell: winning the day through unflashy consistency. Of course, quiet outperformance and omnipresence have been Mars’ strategy this whole decade. Here’s a fun sports-and-music trivia tidbit, which highlights just how exceptional Bruno is. In 2014, he headlined the halftime show at Super Bowl XLVIII—considered remarkable at the time, as he lacked the deep catalog of other Bowl headliners. He’s one of 17 hit-makers past and present to play the televised mega-mini-concert since 2005—the year after the infamous multiartist extravaganza that came to be known as Nipplegate, after which the NFL converted the show to a single-artist showcase. And out of all of those headliners—in order, Paul McCartney, the Rolling Stones, Prince, Tom Petty, Bruce Springsteen, the Who, the Black Eyed Peas, Usher, Madonna, Nicki Minaj, Mars, the Red Hot Chili Peppers, Katy Perry, Missy Elliot, Coldplay, Beyoncé, and Lady Gaga—Mars is the only one to score a Hot 100 No. 1 after his halftime showcase. In general, halftime at the Big Game is regarded as a career-capper: a ratification of a music star’s national profile but a signal he or she won’t be topping radio playlists anymore—the pop-cultural equivalent of a lifetime achievement award. But Mars, first as a supporting act on the 2015 No. 1 “Uptown Funk!” and now as a solo lead on the 2017 No. 1 “That’s What I Like,” has defied that trend, twice. He’s far from over.

So perhaps the question for this entry in our Slate series isn’t just “Why Is This Song No. 1?” but “How does this guy keep coming back?” I would argue that Mars has pulled off something rather subtle over the course of his nearly decadelong recording career. He’s successfully surfed a change in ’10s hit-music tone without fundamentally changing his core pop profile. He may even be partially responsible for the pivot in that tone.

I have long had a theory that decades of pop music can be divided, very broadly, into halves. For example, folks commonly call the 1970s “the disco decade,” but that’s too reductive. Really, the ’70s had two halves: the soft-rock half (roughly 1970–74) and the disco half (roughly 1975–79). Granted, reducing decades to just two modes is also an oversimplification, but my “halves” rubric is useful for understanding major pop trends, and it pretty much works for every rock-era decade. The ’60s were half girl groups and doo-wop, half British Invasion and hippie-pop. The ’80s were half new wave, half big hair (divas and metal). The ’90s: half grunge-and-gangsta, half teen pop–and–bling. The ’00s: half hip-hop and R&B, half Max Martin–style megapop. These trends are hard to see while they’re happening but easier to identify in retrospect. And in the middle of each decade, there’s a pivot record, a chart-topping hit that signals a trend shift is about to occur: think “I Want to Hold Your Hand” in 1964, or “Rock the Boat” in 1974, or “Jump” in 1984, or “Wannabe” in 1996, or “Since U Been Gone” in 2005.

We’re now deep enough into the 2010s that we can begin to identify how to divvy it up. The music of the decade’s first half could broadly be described as soaring dance-pop, heavy on female hit-makers: Think Lady Gaga, Katy Perry, Taylor Swift. And the back half of the ’10s, in which we’re now mired, is largely street rap and bro-pop, its winners much more male: Drake, Justin Bieber, the Weeknd, Kendrick Lamar, the Chainsmokers.

One artist who has managed to ride both halves of the 2010s’ musical movements has been Bruno Mars, who has scored an extraordinary seven No. 1 hits this decade. In the pure-pop early ’10s, Mars was right on trend with soaring ballads and fluttery pop. His first No. 1 in the spring of 2010 was as a supporting singer on pop-rapper B.o.B.’s hit “Nothin’ on You,” and within a year he had shifted effortlessly to his own inspirational smashes like the aforementioned “Just the Way You Are,” the lovestruck “Grenade” and the peppy “Locked Out of Heaven.” Mars even slipped in one chart-topper inspired by a separate ’10s trend, the stark ballad à la Adele: His “When I Was Your Man” copied the formula of her drumless, piano-based “Someone Like You.”

Bruno made the pivot on his sixth No. 1 hit, the Mark Ronson chart-topper “Uptown Funk!”—and it might well be the pivot record for all of 2010s pop. When “Funk” topped the Hot 100 at the start of 2015, it broke a long streak of female-fronted No. 1s. It was also the bro-iest single of Mars’ career to date, a preening blast of male peacocking—more cuddly, certainly, than the Chainsmokers or Drake but still more dude-centric than anything he’d ever done. And Mars has basically remained in this charming-cad mode ever since. “That’s What I Like,” his seventh No. 1, is yet another single about romancing a woman, but in his 30s Bruno is as much about pleasing himself, Smoove B–style, as he is about pleasing his lover: “Sex by the fire at night/ Silk sheets and diamonds all white/ Lucky for you, that’s what I like,” he teases. Mars’ lasciviousness is, at worst, PG-13 on the raunch scale, but it’s still a far cry from the tone of early-’10s devotional-Bruno singles like “Marry You.”

Trendsetter or weathervane—how impressed should we be by Mars’ adaptability? I find it impressive; others would be within their rights finding it craven. But then, there’s always been something captivating about the pop stars who figure out how to survive years’ worth of trendlets. Think of Mariah Carey, who dominated both the grungy early ’90s and the flossy late ’90s; or Beyoncé, who converted from scrappy turn-of-’00s pop-and-B to sleek late-’00s überpop; or Rihanna—the only ’10s trend-surfer more adept than Bruno—shifting from bright and glossy early in the decade to dour and dark in the last year. As for Mars, about the worst you can say for his 2010s survival skills is he’s abetting the charts’ hard-right turn from female-centric pop to an all-male sausage party. But that’s a trend that likely would have occurred no matter what—even if a former Elvis impersonator from Hawaii had never figured out how to front like a shit-talking East Coast baller.