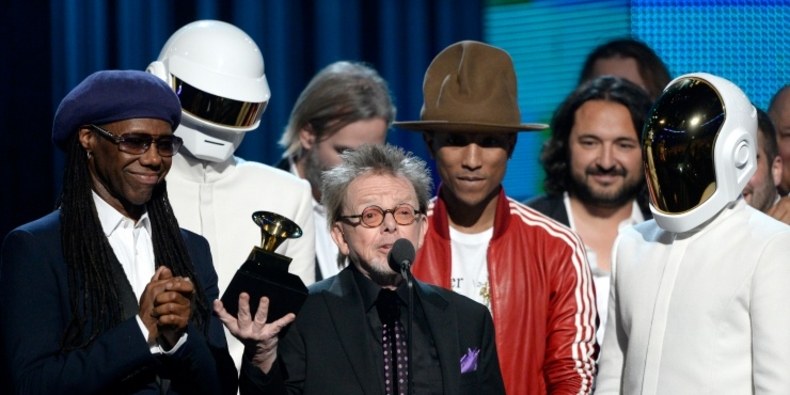 It’s been an interesting couple of days since the Grammy Awards. Critics and cultural observers have tried to make sense of the crossover-heavy spectacle: assessing why white artists supported by black artists keep winding up on top; dissecting Macklemore’s heartfelt but self-serving apology to Kendrick Lamar; and calling the spectacle everything from sublime to a slog.

Sure, this is enriching for all of us viewers, but now comes the part the music industry really cares about: what their annual fête will do to enrich the bottom line.

As I’ve noted before, the one thing the Grammys have over any other awards show is a direct, near-instantaneous impact on the industry it rewards. And now that digital sales are so important to a record’s success, the whole show is fueled by how much the National Academy of Recording Arts and Sciences (NARAS) wants you to click “buy,” even before the credits roll and interrupt poor Lindsey Buckingham. (What up with that?)

Since the Grammys are a Sunday night show, and Nielsen SoundScan collects weekly sales from Monday to Sunday, this week’s new Billboard charts include some insta-reaction digital sales and streams. Of course, it’s a little soon to draw any major conclusions—next week’s charts will factor in a full week of post-Grammy sales and give a better sense of who the biggest post-awards sales winners are. Still, we already have some idea of the impact. Billboard is already reporting that several acts are leaping up the charts fueled by Sunday night digital sales.

One long-held Grammy truism is that performances impact careers more than prizes do. To be sure, the two biggest career-making Grammy appearances of the last 15 years—Ricky Martin in 1999 and Mumford & Sons in 2011—arguably had nothing to do with the awards themselves (Martin won a single Latin Pop statue during the telecast, and the Mumfords won nothing at all that year).

However, I would refine that a bit: What excites Grammy viewers most is a sense of discovery. As long as viewers feel like they’re being clued into something novel—stuff that’s old news to us hardcore music fans but relatively new to the masses— both the performances and the awards can have an impact.

Consider the two acts paired for the night’s most head-scratching mashup: Imagine Dragons and Kendrick Lamar. In terms of awards, the Dragons’ only win (Best Rock Performance for “Radioactive”) wasn’t televised, and Lamar was infamously shut out from his seven nominations. That low prize profile didn’t appear to hurt either act—the fact that the potentially horrible pairing kind of worked meant sales boosts for both of them.

To be specific, the Dragons’ Night Visions saw a 16% rise on this week’s chart, and Lamar’s good kid, m.A.A.d. city rose 63% (each is up about 3,000 copies). Note that percentage discrepancy. ID’s album is already nearly double-platinum and includes “Radioactive”, the third-biggest Billboard hit of 2013, which sold about six million copies; they don’t have many more fans to convert. Kendrick, on the other hand, has yet to score a Top 10 pop hit; the roughly 1.1 million copies of m.A.A.d. city he’s sold to date are largely to hip-hop aficionados, not necessarily Grammy-watchers. Couple that with his crushing performance (and the fact that he handled his losses with Zen-like equanimity)—and see how he’s set for potentially big post-Grammy bounce.

That’s awesome for Kendrick. But what’s even better than a good performance is a good performance plus winning. Best of all is winning in an upset, over a field of heavy-hitters. That’s exactly what Kacey Musgraves pulled off—her neon-tinted performance of “Follow Your Arrow” was followed a half-hour later by a Best Country Album win. Her Same Trailer Different Park triumphed over a field that included Taylor Swift, Blake Shelton, Tim McGraw and Jason Aldean.

The performance mattered, but the win sealed the deal. Musgraves’s label and management couldn’t have ordered up a better advertisement if they’d tried—a double-whammy of “Who is that?” guaranteed to catch viewers’ attention. The result: Same Trailer leapfrogs from No. 81 to No. 28 on the Billboard 200, rising 147% and scoring the largest unit gain on the chart. And again, this is just the chart that factors in Sunday sales; Billboard reports that they are “watch[ing] for the set to take an even bigger leap up the chart next week.” To date, Musgraves’s album has sold just over 300,000 copies and isn’t even gold; if anyone winds up being this year’s Mumford & Sons, it might be her.

This year’s big victor, though, was Daft Punk’s Random Access Memories, which is up 91% on the preliminary post-Grammy chart. That’s a strong rise based on Sunday-night sales, but next week is the one to watch. Every year, the week after the Grammys, the winner of Album of the Year experiences the most closely watched, and often largest, sales bump. Depending on how old the winning disc is, it might experience a one-week increase ranging from 50% to 700% (or, if you’re Herbie Hancock, 967%). This Album of the Year bump sometimes sends albums back to No. 1 (last year’s winner, Mumford & Son’s Babel, achieved this), but not necessarily—especially if that multiplying of sales happens to a disc that was only selling a few thousand a week before the show.

Daft Punk both performed—in a triumphant multi-artist showcase—and won on Sunday’s telecast. The question is how many previously unaware Americans learned about Daft Punk that night.

Random Access Memories was a fairly improbable smash when it dropped last May and debuted at No. 1. How perceptions have changed in nine months! Many critics are already arguing that the Punksters’ win at the Grammys this week might be less of an upset than it first appears—a typically conservative pick that trades on NARAS’s nostalgia for the pre-digital era and rewards the robots’ vintage–Michael Jackson recording technique.

All that might be true, but the statue did go to an album that was largely spent as a commercial force and, until last week, was the lowest-charting of the five Album of the Year nominees. Going into Grammy night, RAM had sold a not-quite-platinum total of 888,000 copies, the best album sales of DP’s career. But after the charmed chart run last summer of “Get Lucky”—critics’ consensus pick for single of the year and future Grammy Record of the Year—the album generated no followup hits, and by January it was selling less than 5,000 copies a week.

Two weeks ago, RAM ranked at No. 67 on the Billboard 200 album chart, below all four of its competitors. (Even surprise AotY nominee Sara Bareilles’s The Blessed Unrest ranked higher than that.) Heading into the day of the show, RAM was at No. 84—still lower than three of the nominees and just one notch higher than prime competitor Taylor Swift’s blockbuster Red, a disc that’s nearly twice as old as Daft Punk’s and has sold more than four times as many copies. Amusingly, as of last week RAM even ranked lower on the Billboard chart than the two Album of the Year winners that preceded it: 2012 winner 21 by Adele (No. 64 last week) and 2013 winner Babel by Mumford & Sons (No. 71).

Given how huge a hit “Get Lucky” was, there wasn’t any “Who is Daft Punk?” meme to match the “Who is Arcade Fire?” 2011 meme after that band’s upset victory. Then again, an album that generates that big a single but sold less than a million copies still has room to grow. To your average CBS viewer, Daft Punk may be as big a discovery as Kendrick Lamar. Those attending the ceremony are also reporting that Daft Punk’s final win was the only one that caused stunned gasps in the press room. And as Billboard points out, DP’s double win of Album and Record of the Year for RAM and “Lucky” is quite rare; the last act to do it, Robert Plant and Allison Krauss in 2009 (Raising Sand and “Please Read the Letter,” respectively), saw their album climb back up to No. 2 on the Billboard 200.

I wouldn’t bet on that big a leap for the victorious robots, but stranger things have happened. However old-hat the EDM forefathers might be to you, remember—right now, somewhere in America, a few thousand someones are buying their first Daft Punk album.