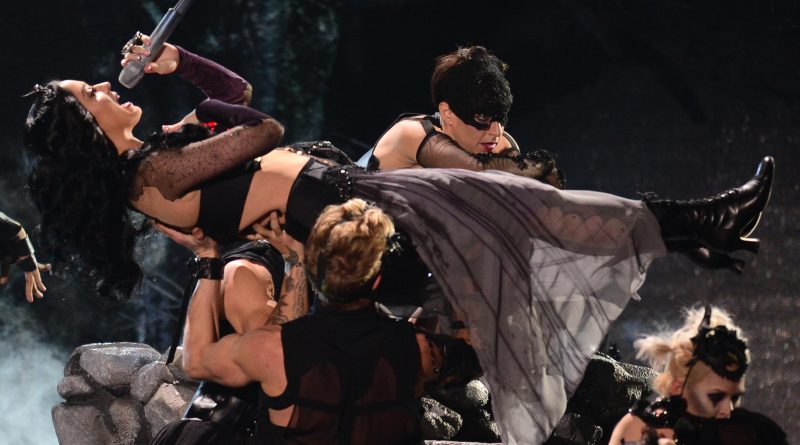 Before we talk about the new No. 1 song in America—Katy Perry’s latest in a hit-packed, half-decade career—here’s a quick pop-music pop quiz.

In 2010–11, Perry tied an impressive chart record when her album Teenage Dream generated five No. 1 singles on Billboard’s Hot 100. She matched a 23-year-old mark set by Michael Jackson, whose Bad in 1987–88 became the first album ever to produce five No. 1’s.

Quick, without Googling: How many of Perry’s five chart-toppers from that record-tying 2010 album can you name in 2014?

If you know your 2010s pop, the first three should be gimmes. Leadoff single “California Gurls”—featuring Snoop Dogg and that line about “Daisy Dukes/ Bikinis on top”—was the consensus Song of the Summer. The second single, the album’s title track, was all electro wistfulness, Madonna crossed with “Jack and Diane”; it’s Perry’s most critically acclaimed single and a notably adaptable tune. Third single “Firework” was the album’s biggest-selling hit, an ersatz It Gets Better anthem that will probably be sung at elementary-school graduations for years to come.

Of the remaining two, I’m going to guess the one you’ll recall more easily is the fifth of the five: the summer 2011 trifle “Last Friday Night (T.G.I.F.),” with its memorable video that put Perry in braces and big hair for a parody of every ’80s teen movie ever. But what was that fourth hit?

“E.T.,” featuring Kanye West. Not ringing a bell? To jog your memory, here’s the Floria Sigismondi–directed video, which is frankly more impressive than the song itself.

As a song, the alien-sex curio isn’t as grabby as any of the above-mentioned four hits. But amazingly, “E.T.” is the second-highest-selling single of Perry’s career (5.6 million copies, behind only “Firework’s” 6.3 million) and was the fourth-biggest Billboard hit of 2011. It’s also a song her label didn’t originally plan to release as a single. Reportedly, after “Firework,” Perry had to convince them “E.T.” could be a hit, and for the remix West was brought in as extra insurance.

I bring up “E.T.” because Perry’s new Hot 100 topper, “Dark Horse” featuring rapper Juicy J, might as well be called “Son of E.T.” The darkest track on Perry’s sparkly 2013 album, Prism, “Horse” is just as spooky—and it was conceived to fill the same slot in Perry’s otherwise bright-and-shiny oeuvre.

And like “E.T.,” its hit potential was not obvious. “This No. 1 is the most unexpected one I’ve ever had,” Perry told Billboard last week when the song reached the penthouse. “‘Dark Horse’ has been a dark horse of a song, since August when [fan group] the KatyCats voted to release it early on iTunes, before Prism even came out. I’m so thrilled and grateful.”

The similarities don’t end there. “E.T.” was a pop-friendly approximation of then-current electronic music tropes—techno and dubstep—just as EDM was beginning to storm pop radio in 2010. Likewise, “Dark Horse” is a pop-friendly version of the hip-hop/electronic subgenre known as trap; it retains trap music’s synth sheen, if not its druggy bleakness. Perry’s version of trap music is then painted over with goth nail polish—made even gaudier in Perry’s Spinal Tap–worthy performance of the song on last week’s Grammy telecast. Both songs are blippy, spacey, and broadly danceable or at least bounceable, if you like your club music minimalist.

Unsurprisingly, both songs were co-written by pop mastermind Lukasz “Dr. Luke” Gottwald—yes, him again. (“Horse” is his second straight No. 1 after Pitbull/Ke$ha’s “Timber,” and it won’t be his last.) Luke has worked closely with Perry since she broke in 2008 and is responsible for the bulk of her chart-toppers. And he, too, seems to have viewed “Dark Horse” as an unofficial sequel to “E.T.” He first wrote the earlier song with with Juicy J’s longtime rap crew Three 6 Mafia in mind, before Perry snagged the song for herself. T6M are best known for their Oscar-winning “It’s Hard Out Here for a Pimp”; they had a handful of gold and platinum albums before the Oscar win, and a handful of Top 40 hits afterward. But Dr. Luke has long had his eye on the charismatic Juicy J for stardom: Luke refers to Juicy as “my rapper” in a recent New Yorker profile, and Juicy is now signed to Luke’s Kemosabe label. With “Dark Horse,” Gottwald, working with his mentor Max Martin and Perry, has effectively redone “E.T.” as a showcase for Juicy, rectifying the loss of the would-be T6M hit to Perry’s prior album.

Sonically at least, Gottwald, Martin, Perry, and their army of studio wizards did a better job the second time. Though it may have been a blockbuster hit, “E.T.” was lugubrious, dopey, and left a bad xenophobic aftertaste. “Dark Horse” isn’t a great song, and it hasn’t entirely solved the dopey-lyrics problem; Juicy drops an unfortunate Jeffrey Dahmer simile right at the start of his verse. But on the whole “Horse” is more energetic and has a brain-sticky digital bounce. Aging Gen-X fans of vintage synths might even find its keyboard hook warmly familiar—it’s a sound R&B and hip-hop have been mining for several years now. Juicy’s rap is catchy, and Perry’s yelp of a voice, an acquired taste at best, is well matched to “Horse’s” insistent ache.

That voice isn’t suited to everything Perry tries—ballads, especially. In fact, “Horse” rights the ship for Perry after “Unconditionally,” a midtempo torch song that was the second promoted radio single from Prism. By Perry’s standards “Unconditionally” was a flop, peaking at No. 14 over the holidays and snapping her streak of Top 10 hits. Balladry has long been a chink in the armor of Battleship Perry: She has repeatedly underperformed with forgettable songs like “Thinking of You” (No. 29, 2009) and “The One That Got Away” (which ended the Teenage streak of No. 1’s and prevented Perry from topping Jackson’s record). The closer Perry veers toward smoldering romance, the more radio listeners yawn.

Long-term, this may present a bit of a challenge to Capitol. The label has been working, single by single, to style Perry—born Katheryn Hudson and a former Christian music singer—as an all-purpose inspirational starlet. Yes, this is the woman who kicked off her pop career in 2008 with a hateful bit of homophobic taunting and an equally noxious bit of faux-homophilic titillation. But the Perry of the 2010s mostly hews to the motivational mode of “Firework”—or, better, the anthemic “Roar,” Prism’s chart-topping leadoff single. “Roar” is a better, sturdier song than anything else on Prism, but Perry and Capitol can’t go to that well every time.

In this era of the focus-grouped hit single, perhaps it’s as simple as listening to avid pop fans. “Dark Horse” was already selling well at iTunes before it was tapped as an official single. Next, if it’s sonic variety Capitol needs, Perry’s homage to ’90s house, “Walking on Air” (the second-best track on Prism after “Roar,” I’d argue) has been doing some business on iTunes as a non-single, and they’d be fools not to turn to it by summer.

For now, popheads have sent a clear message that they enjoy Perry in her Hot Topic, goth-girl-with-training-wheels mode. Maybe next time, Luke and Perry can solve Capitol’s singles dilemma entirely, by combining the uplift song and the spooky song in one—perhaps something about spirit animals, called, say, “Patronus.” Watch, it’ll dominate the Hot 100 for months.