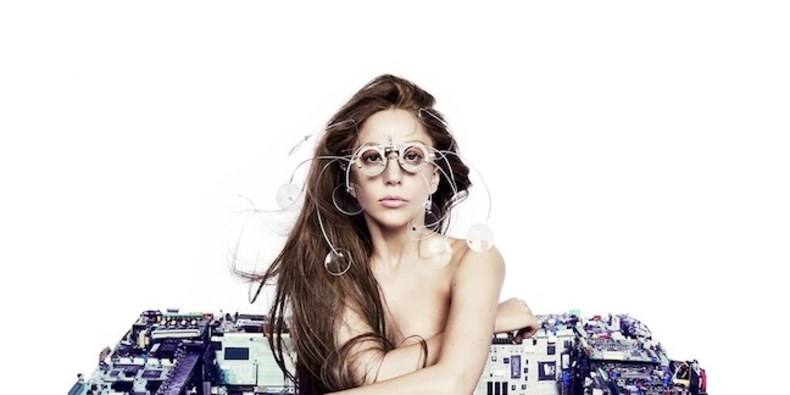 If you’re a pop music fan and you’ve been on the internet this week, you’ve probably read some of the chatter surrounding the lackluster debut of Lady Gaga’s third full-length, ARTPOP. Mother Monster debuts at No. 1 on the Billboard 200 this week with 258,000 in sales.

As Billboard points out in this week’s chart numbers, Gaga’s first-week total is right in line with, if a bit off from, the recent chart-topping debuts of Miley Cyrus (Bangerz, 270,000 in late October) and Katy Perry (Prism, 286,000 in late October). A number between 250K and 300K is the typical first-week benchmark for albums by Top 40-dominating pop stars—Britney Spears will likely debut in that neighborhood when her next album drops in two weeks; her last disc did 276,000 in its 2011 debut.

The problem for Gaga, perception-wise, is she isn’t supposed to be measured by the same yardstick as these other starlets. This is the culture-dominating, Madonna-rivaling road warrior queen who famously sold 1.1 million copies of her 2011 album Born This Way in its first week.

Infamously, that seven-figure sales total was inflated by a two-day Amazon MP3 sale of Born This Way for just 99 cents, a gimmick by Amazon to promote its then-new Cloud Drive service. I have long argued that Gaga doesn’t entirely deserve the big red asterisk that chart historians place next to Born This Way because of this fire sale. Yes, a reported 440,000 of the 1.1 million buyers that week in May 2011 took advantage of the ridiculous price, but we’ll never know how many tens of thousands of those folks were planning to buy Born anyway.

Moreover, the album was purchased at regular price by nearly 700,000 people, a positively Eminem-ian number. Whatever high-six-figure sum Born actually earned that week in 2011, it indicated Lady Gaga’s cultural capital was at an all-time high—in the wake of her Monster Ball tour and the 2008–10 onslaught of smash singles that, arguably, reinvented Top 40 radio in Gaga’s image.

But there’s no getting around it: ARTPOP’s first-week number is a serious comedown—less than one-fourth of Born’s first week. Even if you throw away Born’s 99-cent Amazon purchases, it still outsold ARTPOP by nearly three-to-one.

Think the blogosphere noticed? Oh, my, has it: Spreading like wildfire this week, before the album chart numbers were even released, was a titillating, anonymous-source-based Examiner.com article purporting that Gaga’s label Interscope had spent $25 million promoting ARTPOP—the most since Michael Jackson’s 2001 underperformer Invincible and its $30 million pricetag. Follow-up stories have speculated, dubiously, that ARTPOP’s poor debut would lead to company layoffs.

I have a hard time believing Interscope was that shocked by Gaga’s first-week number. Sure, record companies know how to overspend—Gaga’s “artRave” album-launch party at the Brooklyn Navy Yard (featuring a flying dress) couldn’t have come cheap. But it beggars belief that Interscope would set such a stratospheric budget for ARTPOP, expecting it to do anything close to Gaga’s 2011 numbers. Even an optimistic record label knows Gaga’s Imperial Phase, where she sets the pop-cultural agenda, is over. They’d have plenty of data upon which to base their lowered expectations.

For starters, there’s what I call the AC/DC Rule—my theorem which states that initial sales of an album are a referendum on the public’s feelings about the act’s prior album, not the current one. (I named it after AC/DC, a band whose first Billboard No. 1 album is both less acclaimed and poorer-selling, by a factor of five, than its classic predecessor.)

My rule has worked both ways for Gaga. Her debut full-length The Fame, with its slow sales build and string of hit songs, primed hundreds of thousands of people to line up for Born This Way in week one, resulting in that eye-popping 2011 debut. But that’s when the AC/DC Rule flipped on her: Born’s shelf life was unquestionably shorter and less impressive—fewer hits, medium-size sales, general weirdness that outstripped her prior, more lovable weirdness—and so a falloff in sales, for whatever album came next, was inevitable.

Additionally, looking just at ARTPOP itself, any pop-watcher had to expect it to do modest business where the rubber meets the road: hit songs.

Lead single “Applause” (a grower, in this critic’s opinion) peaked at No. 4 on the Hot 100 in September. That’s a perfectly respectable showing, but it was trounced by the fall’s other two big pop-diva releases, Katy Perry’s “Roar” and Miley Cyrus’s “Wrecking Ball,” which both hit No. 1. Comparing Gagas to Gagas, “Applause” also saw a lower peak than any of her album-leading singles: The Fame’s “Just Dance” made No. 1, The Fame Monster’s “Bad Romance” reached No. 2, and Born This Way’s title track debuted at No. 1. ARTPOP has spawned a second Top 10 hit, “Dope”; but it made the winner’s circle last week only because of Billboard’s quirky decision to count streams of her crazy-emo YouTube Awards performance of the song for the Hot 100. This week, in the absence of heavy YouTube numbers, “Dope” plummets 63 spots to No. 71.

So that’s it, right? A weak debut by a pretentious, high-art-fetishizing album, combined with underperforming singles: surely Lady Gaga is over?

Maybe not. When I think of ARTPOP, I don’t think of career-burying Waterloos like Jackson’s final studio album Invincible. To me—as long as the whole world is going to compare Lady Gaga to Madonna anyway—ARTPOP is her Erotica.

Remember that overlong 1992 Madonna album? Released to coincide with Sex, Madge’s art book/photography happening, Erotica the album was a 75-minute smorgasbord of musings on carnal desire, acclaimed by some at the time but now generally regarded as three-star Madonna at best. It does contain—and is redeemed by—two of her best ’90s singles, “Deeper and Deeper” and “Rain,” both Top 20 hits (the album’s biggest single, the No. 3–peaking title track, is forgettable). Most important, Erotica was only a modest commercial performer, peaking at No. 2 for a single week and thus snapping a streak of No. 1 studio albums (Like a Virgin, True Blue, Like a Prayer). It ended up double-platinum—a fine showing, but the lowest-selling studio album of Madge’s first decade.

The parallels between Madonna’s fifth studio album and Gaga’s fourth are manifold. Pretentions toward high art? Check: Erotica landed at Madge’s Camille Paglia moment, when—between Sex and the recent hit/video “Justify My Love”—her output felt more like a semiotics thesis than a career. Underperforming singles? Check: There were no No. 1s on Erotica; it would take until her next album, 1994’s Bedtime Stories, for her to top the Hot 100 again (with “Take a Bow”). Catcalls from the peanut gallery? Check: In The Rolling Stone Album Guide, Barry Walters aptly recalls the release of Erotica as the moment when “a media backlash intensified.”

Given what lay ahead for Madonna after Erotica—career triumphs like Ray of Light and Music, a raft of Top 10 hits—Gaga would be well within her rights keeping perspective right now.

She’s also got cause for optimism on the singles front, even before ARTPOP runs its course. “Applause”, despite it modest peak, has been in the Top 10 its entire chart life (now 13 weeks), indicating a base of ongoing support from singles-buyers and radio. Speaking of radio, this week, the mad-catchy R. Kelly duet “Do What U Want”—so beloved by radio programmers that Interscope actually changed its plans and accelerated promoting it—rises into the Hot 100’s Top 20, leaping 30 spots to No. 18 fueled by Top 40 airplay.

Come Christmas, “Do What U Want” will likely be a Top 10 or even Top Five hit, and ARTPOP, though still a muddle of an album, may remain propped up within the Top 40. It’s a comedown for Lady Gaga, to be sure—but that’s the thing about pop demigods who have Imperial Phases. After the phase ends, you’re left navigating a career as a run-of-the-mill pop star, proving yourself song by song. Let’s see if Gaga can handle it.