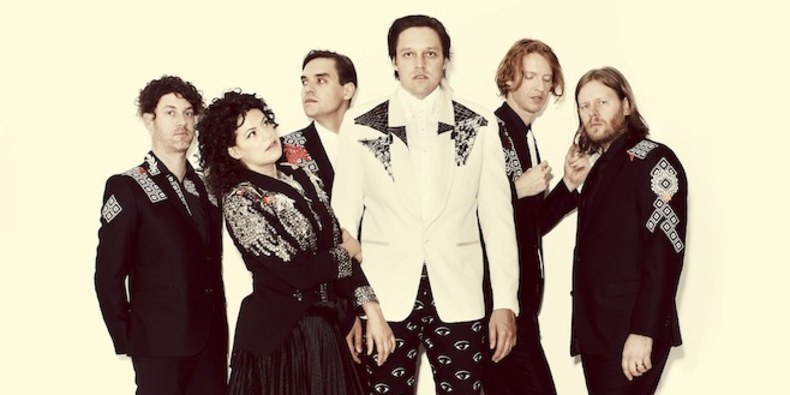 First-week sales of 140,000 were enough to give Arcade Fire a No. 1 album, as Reflektor takes the penthouse on the Billboard 200 album chart.

If you’re a regular chart-watcher, that sales number might look vaguely familiar. That’s because a number in the low six figures with a “1” in front of it is basically the benchmark first-week sales figure for any big-name indie band with a limited radio profile.

Win Butler, Régine Chassagne & co. appear to be on the same recording-and-release schedule as VW. Arcade Fire have now also scored two consecutive No. 1 albums in the same two years: 2010’s The Suburbs and 2013’s Reflektor. And again, the first-week sales numbers of the two chart-topping discs fell within about 10K–20K copies of each other: 156,000 and 140,000.

That 100K-plus number persists across other indie-ish artists that have landed No. 1 albums in Billboard over roughly the last half-decade: Modest Mouse’s We Were Dead Before the Ship Even Sank (March 2007, 129,000), Radiohead’s In Rainbows (January 2008, 122,000), Death Cab for Cutie’s Narrow Stairs (May 2008, 144,000) and Jack White’s Blunderbuss (April 2012, 138,000—the first No. 1 album of his career, believe it or not; the White Stripes never reached the summit). The Decemberists scored a slight outlier in February 2010 with The King Is Dead, which managed to top the chart during a slow sales week with 94,000 copies—but that number’s near enough to 100K to resemble the VW number.

But what do all seven of these acts—Arcade Fire, Vampire Weekend, Modest Mouse, Radiohead, Death Cab, White and the Decemberists—have in common? With a couple of exceptions, they have near-nonexistent Hot 100 presence.

VW and Decemberists have made no Hot 100 appearances at all (four of VW’s songs have “bubbled under” the chart). Arcade Fire, Death Cab and Modest Mouse have had no song peak higher than No. 60. Radiohead and White, relative elder statesmen among these acts, have scored a Top 40 hit apiece, but each was short-lived and long ago (“Creep”, No. 34 in 1993, and “Icky Thump” with the White Stripes, No. 27 in 2007; a second Radiohead Top 40 hit, “Nude” in 2008, was a fluke, spending a single week in the Top 40 due to an iTunes promotion). To be sure, several of these acts have performed well on the Modern Rock/Alternative chart—No. 1s for Modest Mouse and Death Cab, plus White with his former bands—but alt-rock radio success alone doesn’t generate No. 1 albums. And anyway Arcade Fire, Vampire Weekend and the Decemberists have all performed modestly on the Alternative chart, with nary a Top 10 hit among them.

Hit singles matter, because the minute a “hip” band scores a serious radio hit, their album sales generally multiply. Look at Daft Punk (scientists would call them our control group). Earlier this year, Random Access Memories sold an exceptional 339,000 copies in a week—one of the best sales weeks by any act this year. Sure, the duo was coming back as conquering, EDM-pioneering heroes after a long hiatus. But they’d never sold more than 71,000 copies in a week for 2010’s Tron soundtrack; their prior studio album, 2005’s Human After All, had sold 125,000 total.

Clearly, Daft Punk’s X-factor on RAM was the chart-conquering performance of “Get Lucky”—their first (and, to date, only) Top 40 hit. It’s safe to assume the radio-blanketing performance of the Pharrell-produced “Lucky”, which reached No. 2 on the Hot 100 in June, accounts for at least half of Random’s first-week sales number. In fact, given the stark contrast to all their indie-friendly brethren and their 100K–150K starter weeks, it’s pretty safe to assume that the hit single nearly tripled the sales DP could otherwise have expected.

I mentioned a minute ago that Arcade Fire have never reached the top half of the Hot 100. Actually, their pop-chart record is even worse than that: Prior to this fall, they’d scored no Hot 100 hits at all. In late September, the week of their most recent “Saturday Night Live” appearance, “Reflektor” spent a single week on the big chart at No. 99.

We can either regard that meager performance as typical of a band with AF’s profile, or we can consider it their pop coming-out party. The most interesting tidbit in Billboard’s article announcing AF’s No. 1 album this week wasn’t their sales figure, it was this:

“Reflektor is distributed by Universal Music Group, the band’s first album with major distribution…Another change in the world of Arcade Fire is that it has a new partner in Capitol Records, which is promoting the album to radio. (The band is still with its longtime label Merge Records…)”

Major distribution? Radio promotion?! These are uncharted waters for Arcade Fire, and virtually any band on Merge. The band is having its cred and eating it too: Remaining on its indie home while simultaneously straddling mega-conglomerate Universal and decades-old label Capitol.

Despite its James Murphy–generated dance beats, Reflektor remains a quirky album, with few obvious radio candidates. But if Capitol can get Arcade Fire even a medium-size pop hit, it’ll be interesting to see whether, by Album #5, the band will break out of that Vampire Weekend box.