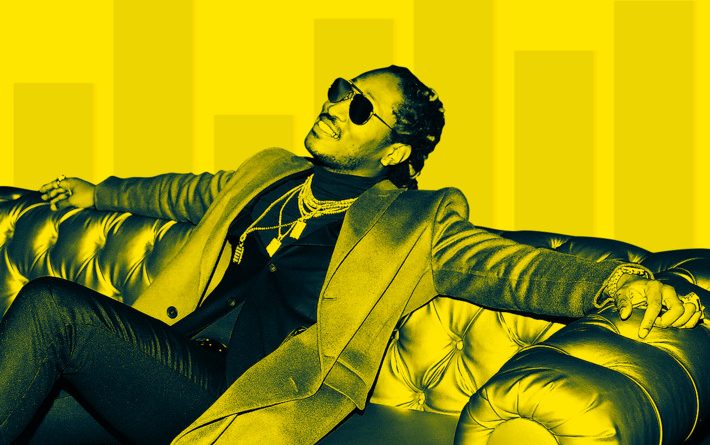 Atlanta rapper Future just scored a Billboard record: The first pair of back-to-back No. 1 album debuts by the same artist. Topping the Billboard 200 album chart this week with his latest, HNDRXX, he replaces himself — his eponymous FUTURE debuted on top the week prior. So is Future now, for the moment, the biggest rapper alive? Or did he pull off this chart feat simply because nobody had ever thought to release music this way? Is this a reflection of Future’s massive popularity? Or is it a technological quirk?

Yes: The answer to all these questions is, simply, yes. As both a chart phenomenon and a rap phenom, Future is a happy aberration — a sui generis blend of Drake, Lil Wayne and … Beck.

For just under four very productive years, Future has stood apart from the core of hip-hop. His bleary-voiced, singsong flow has been widely praised and even shamelessly imitated but largely remains his own trademark. FUTURE and HENDRXX are, respectively, his fourth and fifth No. 1 albums, all generated in under two years (since his DS2rang the bell in July 2015). That’s fast even by the prolific standards of Drake, or DMX in the late ’90s. Despite starting to appear on pop singles by the likes of Maroon 5 and Ariana Grande, Future is neither as radio-massive as Drake nor as acclaimed as Kendrick Lamar. He doesn’t even sell as many albums to rap loyalists as J. Cole does. But Future is building a career very different from any of these superstars — and while Drake and Kendrick are between albums, Future has the Rap’s Leading Light distinction largely to himself.

That extends to the Billboard charts. DMX, Drake, Lamar, and Colehave all pulled off multiple No. 1 debuts — the first three even did so in periods of less than a year. In Drake’s most busy year of chart dominance, 2015, he scored one No. 1 in February and then teamed with Future for another chart-topper barely seven months later, with What a Time to Be Alive.

Yet none of these guys thought to release two albums in two weeks, back to back. Indeed, throughout chart history, no music superstar, rapper, or otherwise, has had the cojones to try dropping a pair of major-label albums in two weeks. There are two parts to Future’s chart record: replacing himself at No. 1, and doing it with two brand-new albums. Over the last five decades, multiple acts have accomplished variations on this, but not the whole feat.

As far back as the 1960s — when Billboard formalized its album chart into a single list, after stereo albums overtook mono — several superstar acts managed to replace themselves at No. 1, including Peter, Paul and Mary in ’63 (their eponymous debut was knocked out of No. 1 by their followup In the Wind), the Beatles in ’64 (their U.S.–only Meet the Beatles! replaced by their U.S. Second Album), Herb Alpert and the Tijuana Brass in ’66 (Whipped Cream and Other Delights replaced by Going Places), the Monkees in ’67 (their eponymous debut bumped by More of the Monkees), and Simon and Garfunkel in ’68 (their Graduate soundtrack and Bookends swapped places at No. 1 multiple times). But albums didn’t debut at No. 1 on the charts back then, and months separated these albums’ release dates.

Then in the 1990s and 2000s, after Nielsen SoundScan made No. 1 debuts commonplace, a handful of zeitgeist-y artists tried the stunt of issuing a pair of albums on the same date. This was a great way to dominate record stores in a single week but made it difficult to hit No. 1 with both albums, and impossible to debut on top with both. The two most successful acts were Guns N’ Roses in 1991 with Use Your Illusion I and II; and Nelly with 2004’s rough-and-smooth album pair Sweat and Suit. Either act could have pulled off Future’s feat if they’d thought to issue the discs in consecutive weeks. Illusion II debuted at No. 1 and Illusion I at No. 2 — ironic, as the latter eventually spawned the biggest hit, the epic “November Rain.” And Nelly’s more hit–ladenSuit was the No. 1 debut over the rap-centric No. 2 debut Sweat, but each album’s opening-week sales (300,000-plus apiece) would have been more than enough to top the chart most weeks. (Others attempting the double-release stunt were Bruce Springsteen, with his quick-fading 1992 pair Human Touch and Lucky Town, neither of which topped the chart; and indie-folkie Bright Eyes, with his 2005 pair I’m Wide Awake It’s Morning and Digital Ash in a Digital Urn, both of which briefly placed in Billboard’s top 20.)

Of course, the economics of the business in the revenue-rich, CD-driven ’90s and early ’00s were quite different than they are in 2017. A single-day double-album release back then was a clever way to boost traffic in shops and create a media-driven midnight-madness event, but it would probably be a wasted effort in the post-bricks-and-mortar industry. Albums are largely acquired digitally now, if they’re even acquired at all. Streaming has been the most seismic shift in the recording business this decade, with Spotify launching stateside in 2011 and Apple Music in 2015. For just over two years, Billboard’s formula has included streaming, with 1,500 song streams counting as an album sale. But the effect that Spotify, Apple Music, and the like had on Future’s Billboard feat is a bit murkier than you might guess.

Recent media chatter has suggested it was primarily streaming that drove Future’s albums to the top of the charts. To be sure, streams hugely boosted FUTURE and HENDRXX — the former tallied 109 million streams in its first week (equivalent to 73,000 “album units” in Billboard parlance), and the latter amassed 93 million streams (63,000 units). These figures were greater than the albums’ traditional sales. But Future still had the top-selling album both weeks the old-fashioned way: 60,000 album sales was enough to make FUTURE No. 1 on Billboard’s sales-only chart, and 47,000 in sales was enough to put HENDRXX on top of that list. Even if Billboardhad never changed its formula two years ago to count streaming, Future would have been on top both weeks anyway.

Instead, I’d argue that streaming has had a subtler, but deeper effect on Future’s career. It has changed the industry’s entire conceptual framework around album releases — how fast after one album can you issue another? When is a project worthy of a major label? And when is an album an “official” album? These questions point to a more fundamental disruptive shift in the business over the last two decades: a wholesale change in our musical metabolism.

In the mid-1990s, Beck signed an unusual deal with DGC Records, owned by mogul David Geffen. In between his major-label albums like Mellow Gold and Odelay, Beck would be permitted to issue one-off “indie” albums, in both senses of that word — the discs would be issued on tiny labels unaffiliated with Geffen, and they would be smaller scale than his “official” DGC releases. For a few years, Beck made good on his plan, issuing lo-fi albums like Stereopathetic Soulmanure and One Foot in the Grave on micro-labels Flipside and K Records, respectively. By 1998, however, with Beck reaching double-platinum sales with Odelay, DGC decided to strong-arm Beck and subsume his entire creative output. DGC yanked Beck’s album Mutations back from indie Bong Load Records and made it a major-label release; the Nigel Godrich–produced disc wound up going gold. With 20/20 hindsight, Beck’s late-’90s experience reads as a dress rehearsal for what became of the entire industry in the 21st century, particularly in hip-hop.

That includes the definition of the word mixtape, rap’s equivalent of the unofficial lo-fi indie release, and a term of art for a supposedly unsanctioned, interstitial collection of songs. (In rap in particular, this can have economic and copyright consequences, since mixtapes often do not have samples cleared.) Mixtapes are practically as old as hip-hop itself, dating to the car trunks of ’80s rappers and producers, and by the 2000s, they were big business — if you can use the term “business” to refer to an album for which little or no money changes hands. Rappers such as T.I. and Lil Wayne made top-selling major-label albums, but they became legends on mixtapes. Ask Lil Wayne fans for his greatest moments and they’ll point you not to his blockbuster Tha Carter series but to Dedication 2 and Da Drought 3.

What made mixtapes vital wasn’t just their edginess or street cred, it was their frequency. Wayne in particular issued such a dizzying volume of content that the mixtape model simply made the most sense, even beyond the loose, shaggy, unlicensed content. It would be utterly impractical for a major label to try to keep up. That line began to blur, however, around the turn of the 2010s — especially for Drake. His breakthrough 2009 mixtape So Far Gone was reconfigured and reissued as an EP on Lil Wayne’s Universal-affiliated Young Money Entertainment; people paid cash money for it, and it went gold. By 2015, Drake began referring to some of his major-distributed projects as mixtapes: If You’re Reading This It’s Too Late was issued with little warning, termed a mixtape, topped the Billboard 200 anyway, and went platinum (double-platinum with streams factored in). Later that year the Drake-Future collaboration What a Time to Be Alive, a joint release of Universal’s Young Money and Sony’s Epic, was also called a mixtape yet topped the album chart, selling gold and streaming platinum. These were, in effect, hip-hop’s own Mutations: in-between projects dropped by major labels and looking to maintain a kind of indie cred while still shifting tonnage.

Future has come up in an era not only of mixtape frequency, but mixtape definitional murkiness. During a 15-month period from October 2014 through January 2016, Future issued one “official” album (DS2) and five so-called mixtapes, four of which were fronted by his own Freebandz label and one, What a Time to Be Alive, issued at retail by the majors. So is there any true difference between Aliveand its contemporaneous mixtape brethren, other than sample-clearance issues (which are confusing even on major-label albums) and the presence of Drake? For that matter, is there any difference between any of these mixtapes and DS2?

This year’s FUTURE and HENDRXX were both issued on Epic Records and both presented as official studio-album releases. Beyond their sonic differences from each other and from Future’s prior work — FUTURE filled with more Atlanta-scene bangers, HENDRXX more introspective like DS2 — are they, in any real way, classifiably different from any other Future project? Nope. But it’s easy to see how an artist incubated in the mixtape era, and whose stardom coincides with the rise of streaming and the industry’s shift from sales to consumption, would find dropping a pair of projects one week apart as unremarkable. For Future, it’s not a stunt, à la Guns N’ Roses in 1991 or Nelly in 2004. It’s business as usual.

So yes, Future’s chart feat is a confluence of actual popularity and happenstance, as a best-selling artist attempts a release pattern no one of his stature has tried before. It makes sense that the pioneer would be a rapper. The question now is who will attempt it next. A current pop act? Justin Timberlake already scored a pair of No. 1 albums in a single year with parts one and two of his The 20/20 Experience project; would he be willing to not only release his next album as another twofer, but issue both parts over a fortnight? I wouldn’t bet on it. Given the setup required for pop releases gunning for Top 40 radio play, dropping two potential blockbusters in two weeks would make any major label nervous. Count on rappers — with their yen for novelty, competitive recording pace, and mixtape-honed willingness to experiment — to corner the market on this chart feat for a while.