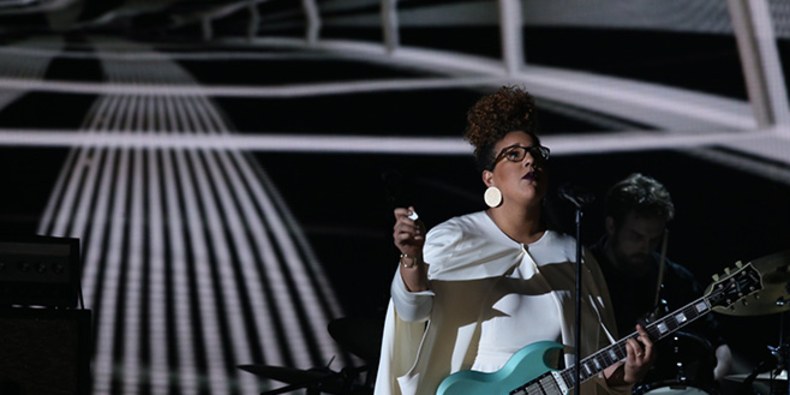 If you were a music fan with a TV and Twitter on February 15, chances are you parked in front of both for the 58th annual Grammy Awards. But for chart geeks like me, this is the moment—the week after the Grammys—we watch closely. Now’s when we find out which artists benefited the most from the National Academy of Recording Arts and Sciences’ annual televised wingding.

It’s a fun guessing game, because the sales results are often as unpredictable as NARAS’s prize-giving. Artists who actually win golden gramophones are honored for albums and songs that are months old, stuff that many buyers have already acquired. Whereas acts who perform on the show routinely do better on Billboard’s charts—even if they come home with little or no Grammy hardware.

The general consensus among critics and fans was that 2016’s was a pretty “meh” Grammys, with some botched performances—including a heavily hyped Return of Adele that became the mis-mic’d piano heard ’round the world—and diminished TV ratings. If you’re guessing that this hodgepodge would result in a mixed post-Grammy sales picture, you would be correct—there was basically no Grammy-spawned album blockbuster this year, as there have been in years past. In fact, in subtle ways, the 2016 Grammys may be remembered as an inflection point in the music business’s decade-long shift away from the album and back towards the single as its core unit of music consumption.

Before we dive in there, let’s look at albums first. Here are the 10 biggest album gainers among Grammy-related acts (televised performers and honorees alike) on the newest Billboard 200 album chart (the first to include post-Grammy sales). The percentage increases on this list are for pure album sales, not the sales-plus-streams-and-tracks methodology Billboard now uses to compile the album chart (I’ll talk more about tracks in a moment):

These three-digit percentages might seem eye-popping, but they are all increases from modest prior-week sales. Not listed above is the chart’s current No. 1 album, Adele’s 25, which returns for a ninth week at No. 1 with a roughly 25% bump to 125,000 in album sales (151,000 when streams and tracks are included). Numerous headlines this week are trumpeting Adele’s comeback atop the chart as a triumph after her weak live showing on the telecast, but 25% is a modest increase during post-Grammys week. (It must also be said that Ms. Adkins was rolling weekly totals in the low-six-figure range for most of the prior month. She might have gone back to No. 1 this week even if she hadn’t appeared on the show at all.)

The more notable trend is this: As always, the secret to a big post-Grammy album-sales gain was a performance, not a win. All 10 of the above big gainers performed in some way on the show. The biggest gainer, Andra Day, actually lost in two Grammy categories (Best R&B Album and Best R&B Performance), but her dusky performance of her single “Rise Up” powered a sextupling in album sales. The same goes for James Bay, Tori Kelly, and Sam Hunt—all Best New Artist nominees, and all losers of that major prize (Bay also lost in two Rock categories). But it didn’t matter, as Bay’s and Kelly’s one-off Grammy duet quadrupled his sales and more than doubled hers; and Hunt’s live teamup with Carrie Underwood nearly doubled his sales. (Not on this list is the actual winner of Best New Artist, Meghan Trainor, who saw a solid but relatively unspectacular 30% increase for the week; Trainor probably did herself more favors performing in the show’s tribute to Lionel Richie than winning a statue.) As for those who did take home hardware, the only gainers on this list who were also winners—not counting Musicares honoree Richie, who was not in a competitive category—were Kendrick Lamar, Alabama Shakes, Little Big Town, and Taylor Swift.

A word about Swift: Album of the Year winners routinely see a big sales bump the week after the Grammys. Sure enough, 1989’s win in that flagship category helped fuel a one-week doubling in sales (up 109%)—remarkable for a disc that’s already sold 5.8 million copies since its October 2014 release—and a return to Billboard’s Top 10. But compare Swift’s 31,000 in post-Grammy sales to AotY victors of the past, and 1989 looks a little weak. In prior years such winners as Ray Charles’ Genius Loves Company, Adele’s 21, or Mumford & Sons’ Babel have surged into the No. 1 spot with hundreds of thousands in Grammy-fueled album sales. In my own recent study of post-Grammy surges by AotY winners since 2001, Swift’s 109% rise is toward the low end of the pack: Other AotYs have surged anywhere from 147% (OutKast’s Speakerboxxx/The Love Below) to 483% (Beck’s Morning Phase) to 714% (Dixie Chicks’ Taking the Long Way). In fact, in the last 15 years, the only AotY winner to see a smaller post-show sales bump was…Taylor Swift’s 2010 winner Fearless (58%). Maybe Swift’s two albums were both too old and too sales-saturated to grow much; each was about 14 to 16 months old when it won the big prize.

Or maybe Album of the Year itself is diminished—both as a sales force and as a Grammy prize. This is borne out by the sales enjoyed by the 10 biggest song gainers post-Grammys. Here’s that list, according to Nielsen and Billboard:

These 10 songs, eight of which were performed live during the show, sold a collective 298,000 copies the week after the show (and that’s without streams included). Compare that to the 10 Grammy-boosted albums above, which sold a collective 141,000—or less than half as much. Percentage increases for the songs were greater, too, ranging from a low of 249% for Ed Sheeran’s Song of the Year winner “Thinking Out Loud” to Alabama Shakes’ 23-times-sales-surge after their sizzling performance of “Don’t Wanna Fight” (yet again, a reminder that performances spawn bigger boosts than statues). Compare that to the album percentages—Andra Day’s leading album surge of 535% is smaller than the top three song surges, and just barely larger than her own song’s increase of 524%.

To be sure, it’s easier and cheaper to download a single than an album, and digital song sales—while lower now than they were before Spotify—are stronger on the whole than album sales. But there’s one more data point that points toward the evolution of the Grammys from albums toward songs: the placement of the top prizes in the Grammy show itself. For once, this year’s show did not close with Album of the Year, long perceived as the marquee award.

Instead, NARAS placed Record of the Year, the Grammy that rewards a single recording, last of the night, implying that, in the digital-and-streaming era, the year’s top recorded song is a bigger deal than the top recorded album. To me, this was a tacit acknowledgment that Record of the Year has evolved into the most centrist, broadly agreeable Grammy award. That’s not something I would have said as recently as a half-decade ago. In a 2012 piece I wrote for the Village Voice assessing the Record of the Year category, I lambasted RotY as a snoozy backwater of a prize that rewarded a song far from the center of popular culture. During the ’00s (the award’s nadir), Record of the Year went to such barely-memorables as U2’s fatuous “Walk On,” the polite Ray Charles–Norah Jones duet “Here We Go Again,” and the Dixie Chicks’ bilious “Not Ready to Make Nice.”

Since 2010, however, NARAS has consistently given the RotY statue to undeniable hits—some great, some schlocky, but all clearly mass-appeal records. (As I have long argued, this is far preferable NARAS behavior than them acting as middlebrow cool-hunters, as they often do in Album of the Year.) In fact, three times since 2012, NARAS has done something remarkable—they’ve bestowed Record of the Year upon the same song that was Billboard’s No. 1 Hot 100 single of the year. Here’s a rundown of the last half-dozen Record of the Year Grammy winners and where they placed in Billboard’s year-end ranking of Hot 100 hits:

Why is this remarkable? Because prior to the turn of this decade, it was extraordinarily rare for the Grammys’ Record of the Year to match Billboard’s. Indeed, prior to the recent trio of “Rolling in the Deep,” “Somebody That I Used to Know,” and “Uptown Funk,” it had only happened seven times in 52 years (and not at all in nearly two decades):

In all, there has never been a period of Grammy history with such strong NARAS–Billboard Record of the Year correlation than the 2010s: three matches in five years. (Only the early-to-mid ’70s, where NARAS and Billboard lined up three times in six years, comes close.) In other words, if you already felt—in this era of the social meme hit and the Song of Summer—like the general public was paying more attention to hegemonic No. 1 records, here’s further evidence for that theory.

It also affirms that even the Grammys, that bastion of album-length respectability, is plunging headlong into the Era of the Song. One of the most uncomfortable moments of this year’s Grammy telecast came when NARAS President Neil Portnow kvetched about the miniscule rates artists receive on streaming-music services. Besides the doubletalk of this line of argument, it also seemed self-denying and counter to the inevitable future of the awards. Surely, it won’t be long before all the post-Grammy chart action will be in the cloud, where the single is king.