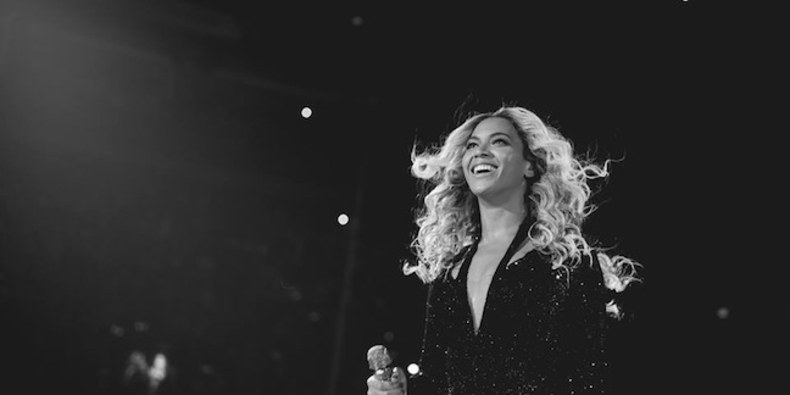 In a 2013 fourth quarter that has seen virtually every leading contender for the Queen of Pop title drop a new album, Beyoncé just trumped everybody, crashing in late last week with an eponymous set that sucked all the oxygen out of the internet.

Before the weekend was even over, Billboard had already reported that Beyoncé is set to debut at No. 1 when the album chart is made official in a couple of days. And Bey isn’t going to win by a whisker, either. The sales number will be fairly impressive—one that will put the upper-200Ks we’ve seen from the likes of Gaga, Miley and Katy to shame. A total of at least 300,000 copies is reportedly a lock, 400,000 is probable, and a number as high as 600,000 is not out of the question.

All this is remarkable for a number of reasons—Queen B is rewriting many rules of the game with this album:

Off-cycle release: The tracking week for the Billboard 200 album chart runs from Monday to Sunday, and Beyoncé materialized late on Thursday night, leaving just over three days to amass sales before the chart week closed. Bey’s 72 hours of sales will trump discs that were in stores all week.

Holiday competition: The album dropped into the thick of shopping season, when album sales are stronger generally, giving Beyoncé a somewhat higher hurdle to clear to reach No. 1. It should be said that by picking a mid-December week, she avoided the two heaviest album-buying weeks of the season, Thanksgiving/Black Friday and the week leading directly into Christmas; in mid-December, 200,000 copies or so is generally enough to reach the penthouse.

Digital-only: Speaking of Christmas, Beyoncé can’t be wrapped and placed under the tree. At least for now, it’s only available as a digital “video album” comprising 14 songs and 17 music videos.

Price: Said album is on sale for $15.99—that’s not just “retail price,” that’s the only price. Sixteen bucks is something we all got used to in the late ’90s, the pre-Napster era of $18 compact discs and no available retail singles. But it’s exceedingly rare nowadays for a front-line album from a major label shooting for a big number to avoid sale pricing altogether. Digital retailers like AmazonMP3 are notorious for deep-discounting new albums—including, most infamously, a 99-cent sale on Lady Gaga’s Born This Way in 2011. Even Taylor Swift’s Red, an album that last year sold a staggering 1.2 million copies in a week and managed to avoid digital deep discounting, was sale-priced on CD by Target and Best Buy at just under $10. A first-week superstar album only selling at $16 is practically unheard-of nowadays.

Retail exclusivity: The only store selling Beyoncé in week one is the iTunes Store. Apple has had exclusives on new albums before, the most prominent being a set from Bey’s own husband—in August 2011, Jay-Z dropped his Kanye West team-up Watch the Throne at iTunes exclusively for its first three days. However, Throne actually underperformed a bit in week one; early forecasters were expecting a number above 500,000, and the final figure was 436,000—impressive, but neither Jay’s nor Ye’s highest. Anyone who thought Queen B limiting herself to Apple’s marketplace would cause her to fall similarly short are eating crow right now, as her rumored sales estimates drift higher and higher.

The person who’s probably most peeved by Bey crashing the album-chart penthouse is the guy who, until Thursday, was expected to easily hold it: country megastar Garth Brooks, whose post-retirement comeback set, Blame It All on My Roots: Five Decades of Influences, took the No. 1 slot last week. The multi-disc box set of covers, greatest hits and a live DVD has been selling strongly since its release three weeks ago.

For chart-watchers, there’s something weirdly poetic about Beyoncé ejecting Brooks from the No. 1 spot. Garth is the king of the nontraditional, make-up-your-own-rules album release—he’s topped the charts before with everything from a slickly packaged box set to a priced-to-move live double CD. True to form, Brooks’s Blame rewrites almost all the same rules as Beyoncé:

Off-cycle release: Dropping on a Thursday—Thanksgiving Day, in fact—Garth’s box set had only four days to amass sales in its first chart week. He rolled a respectable 164,000 copies in those four days.

Holiday competition: By releasing his set on Thanksgiving, Brooks gave himself an even bigger challenge than Queen B—albums landing the week of Black Friday face stiff competition. Blame ultimately debuted at No. 3, held back by the ultimate stocking-stuffer album: boy band One Direction’s Midnight Memories, which sold more than 500,000 copes in its first week. (Brooks then had the last laugh, suffering a smaller second-week fall than 1D and ejecting them from No. 1 the following week.)

Pricey: Brooks’s album is both a premium item and a steal. The set retails for $30 and hasn’t sold below $25. But that’s for a package that includes six CDs and two DVDs—unlike Beyoncé, Garth priced his holiday gambit lower than the norm. Still, if you want something new from either act this Christmas, you’re going to need more than a Hamilton.

Retail exclusivity: Brooks has long had a tight relationship with Walmart, and Blame is only available there and at Walmart-affiliated Sam’s Clubs.

Pretty much the only major way Brooks differs from Bey is over the digital question: Garth has long forbade Apple, or any digital retailer, from selling his music. (Since the Beatles hit iTunes three years ago, Brooks remains one of the last digital holdouts; most of the acts mentioned in this 2010 article have since caved.) Most times of year, this intransigence would make Brooks the less consumer-friendly act—but at the holidays, his box set is perfect tree fodder, likely a big reason for his strong, steady sales. This time it’s Beyoncé who’s being the consumer-challenging diva—if you want to give the full Beyoncé experience to a loved one, wrapped up with a bow, you’ll either have to give a gift card or know something about burning DVDs.

In short, when this holiday season is done, it will have been dominated by two albums, and two artists, that set their own terms of sale. And arguably, by releasing the less Christmas-friendly collection but rolling higher numbers, Beyoncé has out-Garthed Garth. What makes the numbers Mrs. Carter is rolling all the more remarkable is that her fans are clearly, largely, buying Beyoncé for themselves.

The question one is left asking, once Beyoncé’s remarkable debut is official, is: Where were all these fans two and a half years ago? Bey’s last studio album, 4, debuted in the middle of summer 2011 with 310,000 copies. That’s a more than solid number, but it’s the lowest debut-week sum of her post–Destiny’s Child career. More remarkably, 4 generated no Top 10 singles on Billboard’s Hot 100—not “Countdown,” not “Run the World (Girls),” not “Love on Top”—making it the only album of her entire career, DC or otherwise, that failed to do so. In total, 4 has sold about 1.4 million copies, solidly platinum but well below the sales of her prior three solo albums.

This explains, in part, why it was so difficult to predict what Beyoncé’s fifth album would do when it finally materialized. In the intervening three years, she’s had America’s favorite baby, sung the National Anthem for President Obama’s second inauguration (not without controversy) and been showcased at Superbowl halftime—events that have only solidified her place in the firmament of national treasures, even if they haven’t done much to get her back on the radio.

Now, throw in all the X-factors surrounding the iTunes exclusive and the rare all-video album (a gambit that didn’t exactly work for Eurythmics a quarter-century ago), and predictions become maddeningly difficult. If anyone tells you they knew a week ago that Beyoncé’s next album would be a foregone blockbuster, they’re either lying or haven’t been paying attention.

With 20/20 hindsight, it’s now clear that Beyoncé is overperforming because it broke the rules. Fans aren’t just buying an album, they’re buying into an event. Artists ranging from Michael Jackson to Garth Brooks have shown that event albums—releases that create their own weather—are high-risk, high-reward prospects.

This time, Bey has made the tactic work for her—like gangbusters. A couple of months from now, we’ll know this ingenious, D-Day-like album release really did work if a song from Beyoncé puts Queen B back in the Hot 100’s Top 10, where she belongs.