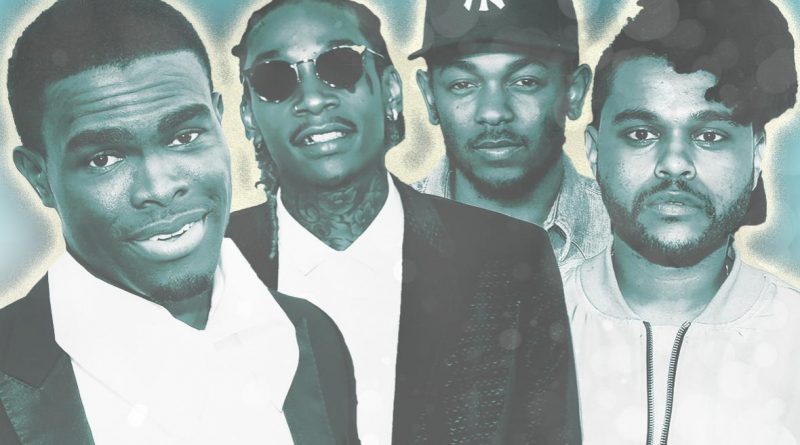 Hello my straight masterpieces—
stylin’, wilin’ livin’ it up in the city:

Has it actually been 12 months since we last chatted? That’s impossible—I’ve only written about eight No. 1 hits in all that time. (Nine if you count that Dad-dancing dude who got robbed by Apple and Adele and peaked at No. 2.) Seriously, eight new chart-topping songs in a year is the lowest number atop Billboard’s Hot 100 in a decade—the social media–fueled return of the monoculture is in full effect, intensifying the era of the snowball smash.

If I may refine Carl’s assessment of 2015, this year felt to me like, if not an eye blink, perhaps a hangover from 2014. Last year’s most acclaimed album, D’Angelo’s Black Messiah, landed just before Christmas, missed most publications’ year-end surveys and dominated tastemaker playlists deep into the new year. On the charts, Taylor Swift methodically executed the back half of her global #squad-amassing plan, milking an album that was already crushing everything in fall 2014 for hit after hit after hit. On the Hot 100, America spent literally the entire first half of the year listening primarily to two giant songs—the one about peacocking, self-kissing dude bros and the one about mourning, muscle-car-driving dude bros. For the second straight year we had a fizzle of a summer-song battle (ah, OMI, we hardly knew ye), and our fall was commanded by another prodigal pop star, Justin Bieber, executing his treacherous comeback. By the time Adele showed up to hit a giant reset button in October it felt like 2015 was just beginning, and the year was more than three-fourths over.

Julianne, you asked me about the charts and crossover. This was a strange year for that—mainly because I’m not sure what “crossover” means anymore. In the pre-digital era, I think we all defined that term as the process by which a song migrated, over weeks or months, from a genre like R&B or country to Top 40 radio, or occasionally vice versa. But ever since Billboard rewired its genre charts with digital data about three years ago, crossover as we once knew it no longer exists. In the digital insta-hit era, songs don’t tend to migrate; they either pop quickly (“Hotline Bling,” “Can’t Feel My Face”) or don’t quite (“Bitch Better Have My Money,” which topped black radio over the summer but never really became an across-the-board pop hit). Honestly, the last genre from which songs still cross over the traditional, slow-and-steady way is that beaten-down category, rock. Witness Walk the Moon’s “Shut Up and Dance,” which topped the alternative chart last winter and became a Top 5 pop hit by the summer, or just Grammy-nominated Elle King’s “Ex’s and Oh’s,” which took the better part of a year to top that same alternative chart and then became a Top 10 pop hit about three months later.

Back to R&B crossover: When we convened for the Music Club two years ago, I marveled that no black artists fronted a No. 1 hit in all of 2013—a historic Hot 100 first. In 2015, we appear to have already flipped that script: Except for a single week when the Hot 100 was commanded by the Biebs’ “What Do You Mean?” and for the past seven weeks by Adele’s “Hello,” every chart-topping hit this year was fronted or prominently supported by an artist of color: Mark Ronson and Bruno Mars’ “Uptown Funk” (a hit truly powered by Mars), Wiz Khalifa and Charlie Puth’s “See You Again,” Taylor Swift and Kendrick Lamar’s “Bad Blood” (without Lamar’s injection of B12 into the remix, the song might not have topped the chart), OMI’s “Cheerleader,” and the two big hits by the Weeknd, “Can’t Feel My Face” and “The Hills.”

The thing is, except for that latter Weeknd hit—the creepy “Hills,” not the MJ-esque “Can’t Feel My Face”—none of these songs was a chart-topper at black radio. Billboard’s R&B/Hip-Hop Airplay list—a radio-only chart that is now the only real way get a sense of what core R&B and hip-hop fans actually listen to—was topped all year by the likes of Big Sean and Rae Sremmurd and Jeremih and Meek Mill and Nicki Minaj (with the thumping “Truffle Butter,” not one of her pop-aimed tracks). None of these songs was a Top 10 pop hit; Jeremih’s “Planes” missed the pop Top 40 entirely. Whereas “Uptown Funk”—a 14-week Hot 100 chart-topper and a song so indebted to black-music history the Gap Band managed to shake it loose for some change—never came close to topping black radio playlists.

So was it a year of crossover? Even with all of the above data, it’s hard to say. In her sharp assessment of Fetty Wap’s “Trap Queen,” Lindsay rightfully identified his X-factor as less his lyrical skills than the singsong melodicism of his voice—both in his rapping and in his crooning. To me this makes him an heir to both Snoop Dogg, who introduced melodic cadence to gangsta flow, and Nelly, the ultimate region-specific sing-rapper. What all of those guys have in common was near-instant acceptance by both black and white audiences; gradual crossover was basically unnecessary for them. The chart data for Fetty bears this out: “Trap Queen” topped black radio and cracked the Hot 100’s Top 5 the same month. “Queen” is also the year’s top streaming song according to Billboard. (Silento’s dance-driven “Watch Me” ranks third among streaming songs for the year.) Is this crossover? To me, it indicates more that streaming has arrived as a hit-driver—call it the Stream of Young America. The medium is crossing over, as much as Fetty Wap is.

Because I am perpetually preoccupied with lists of all kinds, before I punch out for this year’s club and pass back to Carl and your other guests, I want to touch on the album I (like Lindsay) have, entirely predictably, placed atop my Top 10 list. Kendrick Lamar’s To Pimp a Butterfly is going to sweep it all. It’s already topped polls from Rolling Stone, Spin, and Pitchfork; it takes silver at Paste and Stereogum; and the top slot in this year’s Pazz and Jop critics’ poll is a mortal lock unless Kanye or Frank Ocean drops an album before Christmas. And that’s just the critics—Pimp and Lamar also dominate the just-announced Grammy nominations, including the coveted Album of the Year shortlist. (Though if we have learned anything, especially after the most recent Grammys, it’s that acclaimed albums by young black artists are not guaranteed winners.) Should Lamar’s album top Pazz and win the coveted Album of the Year Grammy, it would be the first to sweep the critics and the Recording Academy since Outkast’s Speakerboxxx/The Love Below in 2003–04. On top of all that, Pimp has even been, if not quite a hit-generator, a strong seller—the album debuted at No. 1 and is the 16th-biggest seller of the year (740K to date, so not quite platinum—but an Album of the Year win might give it that final push).

For the record, I am fine with all of this. I know that, as critics, we hate hive-mind predictability. This will be the second straight year we all check the box for a jazzy, arty, nth-wave-post-hip-hop album that addresses black America after Ferguson, Missouri. (As if this is a bad thing!) I’m with Julianne—besides the fact that Pimp sounds to me like one for the ages, I feel it’s also very current in terms of what pop, in all its forms, now is: the handiwork of many, coming together to create a single, hybridized vision. On Pimp, Lamar convened a slew of hip-hop, R&B, funk, and jazz leading lights—Dr. Dre, Flying Lotus, Pharrell, Lalah Hathaway, Bilal, George Clinton, Robert Glasper, Kamasi Washington—to execute his ultimate vision. This makes Kendrick not unlike Taylor or Adele, pop stars who generate albums like film auteurs, marshaling an army to generate a product (a word I use in its most positive, mathematical sense).

Pop has always been this one-plus-one equals 10,000 equation—think about the studio births of Sgt. Pepper, Thriller, and Nevermind; think about this year’s movie Love & Mercy and what it reminded us about Pet Sounds and Brian Wilson’s heavy reliance on the Wrecking Crew rather than his own band. The difference is, in the 2010s—as the myth of the artist as sole creator slowly drops away—we are accepting that everything from hit pop product to auteurist albums can result from a cast of many. Our summer hits this year largely relied on front-line, not background, producers. Max Martin’s song studio—all alarmist protestations to the contrary—is rethinking pop’s vocabulary and expanding its genre purview, especially on hits like the Weeknd’s “Can’t Feel My Face.” Skrillex, Diplo, and Justin Bieber produced something resembling high art this year and didn’t credit it to any one of them. We love our relatable artists, but more than ever, we love the machine.

Showing you the game everybody else was playin’,

Check out all Slate’s coverage of the best of 2015.