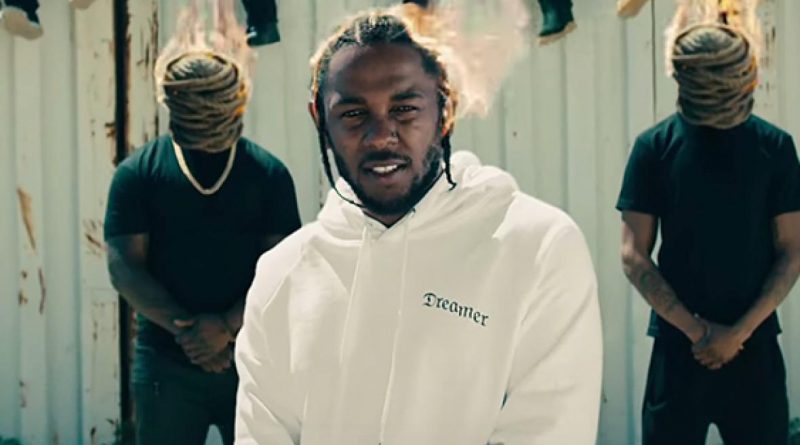 He’s now calling himself “Kung Fu Kenny.” But who knew the greatest rapper alive would pull a Carl Douglas and actually hit the top of the pops?

It’s not like Kendrick Lamar made it easy on himself—he didn’t rely on the usual performance-enhancing tricks of a dance craze or a viral gimmick to propel “Humble” to the top of Billboard’s Hot 100. Instead, he made a tight, sub–three-minute single—a rapper’s exercise in efficient bars delivery, with a thumping 808 beat and an infectious piano hook. That hook comes courtesy of Michael “Mike Will Made-It” Williams, making “Humble” the second No. 1 for the Atlanta producer, after Rae Sremmurd’s 2016 smash “Black Beatles.” But unlike that Mannequin Challenge–fueled chart-topper, no social fad is behind the ascension of “Humble.” The song’s chorus does have a repetitive, meme-worthy mantra, “Bitch, be humble/ Sit down,” and at one point Kendrick even taunts, cryptically, “My left stroke just went viral,” all but daring the interwebs to meme-ify him. But no one’s lining up (yet) to generate Twitter yuks à la the ones inspired by Migos’ “Raindrops—drop top” or even the respective “Challenges” currently keeping Future’s “Mask Off” and Lil Uzi Vert’s “XO Tour Llif3” in the Top 10.

So why is this song No. 1? “Humble” is catchy, but Lamar’s been catchier before: loopy-catchy on “Swimming Pools (Drank)” (No. 17, 2012) and “Bitch, Don’t Kill My Vibe” (No. 32, 2013) from his major label debut Good Kid, M.A.A.D. City, James Brown–funky on “King Kunta” (No. 58, 2015) from his masterpiece To Pimp a Butterfly, and singalong–ready on the Pharrell-featuring “Alright” (No. 81, 2015). On that 2015 album, he even offered a leadoff single, “i,” with a radio-friendly sample of the Isley Brothers (No. 39, 2015). But none of these songs even made the pop Top 10, let alone topped the chart. (Even on Billboard’s R&B/Hip-Hop Airplay chart, Kendrick hasn’t been a chart-topper as a lead artist prior to this year.) If you could warp the space-time continuum, compress the last five years into a flat circle, and play all these K-Dot singles side by side, you might not even pick “Humble” out of a lineup as the obvious chart-topper.

Yet “Humble” stormed to the top of the Hot 100 in three short weeks, and it nearly did it in one. When it materialized earlier this month, “Humble” slammed onto the Hot 100 all the way up at No. 2, instantly becoming Lamar’s highest-charting hit as a lead artist. (He did top the Hot 100 once before as a featured artist, on Taylor Swift’s “Bad Blood,” though Swift’s overly busy music video made K-Dot feel like window dressing.) That first week, “Humble” had greater digital sales and streams than any track on the chart; only modest radio play in its first week kept Lamar from debuting in the top slot. After slipping in week two to No. 3, the song climbs to No. 1 in this, its third chart frame, the same week Lamar’s new masterwork Damn (officially styled DAMN.) debuts atop the Billboard 200 with the biggest album debut so far this year. Heavy streaming of that new album powered the song to No. 1, and while airplay for “Humble” is still lagging, Billboard reports it is starting to catch up.

So the simplest explanation for Lamar’s first No. 1 single as a lead artist is, he’s not only the biggest rapper alive right now, he’s kind of the biggest anything in music right now. Yes, at least for the moment, maybe even bigger than Ed Sheeran, the artist Kendrick replaces atop the Hot 100. Sheeran’s “Shape of You” sat stone at No. 1 for 12 long weeks; at one point about halfway through its run, it was more than twice as popular as any competing single, suggesting we’d be living under the Ginger Hobbit’s thumb until the summer. Given the relief many feel at finally having something other than “Shape of You” in the No. 1 slot, it’s tempting to hero-worship the more critic-friendly Kendrick Lamar, and to mythologize Sheeran’s downfall as something akin to the storied, generation-defining 1992 album chart defeat of Michael Jackson by Nirvana.

Except here’s the thing: As pop entities, Kendrick and Ed have a ton in common right now. (And no, I’m not talking about their shared devotion to hip-hop.) This is not a case of an underdog rapper defeating a radio-friendly pop star. This is two music-biz megastars entering their respective imperial phases and battling for chart dominance.

It started on the album chart, where, according to Billboard, Lamar’s Damn opened with sales of 353,000—those are traditional CDs or full-album downloads, not streams. That total topped Ed Sheeran’s first-week sales for ÷ aka Divide—the year’s prior best opener—by about 10 percent. (When streams and tracks are factored in, Lamar’s 603,000 total album “units” beat the corresponding Sheeran figure, 451,000, by an even larger margin.) As for the Hot 100, Lamar’s No. 3–debuting “Humble” opened in April much the way Sheeran’s No. 1–debuting “Shape of You” launched in January—presold to an army of acolytes. True, Sheeran had earlier, easier radio acceptance and bigger initial download sales, while Lamar opened bigger on streaming services, typical for a rapper in the age of Spotify and Tidal. But these two solo male stars’ debuts were just variations on a theme: Fans were primed for whatever first single each of them dropped and flooded in to consume it immediately.

This helps explain how a Kendrick single that even critics are lukewarm about coasted to No. 1 so easily. Two years after the widely acclaimed To Pimp a Butterfly and one year after an album of Lamar outtakes managed to top the chart, Kendrick is now as fully established a superstar as Sheeran, Drake, the Weeknd, or Justin Bieber—acts who drop new albums and see every track on them materialize somewhere on the charts. Indeed, the same week “Humble” takes the final lap to No. 1, all of the other 13 tracks on Damn debut on the Hot 100—from the Don Cheadle–video–supported “DNA,” at a lofty No. 4, to the fatherly saga “Duckworth” at No. 63. (By scoring two simultaneous new Top 10 hits, “Humble” and “DNA,” Lamar echoes another feat by Sheeran, who launched Divide with two instant Top 10 hits in January.) For about a year now, I’ve noted in this series about how the growth of streaming is boosting left-field rap songs to top the charts, from “Panda” to “Bad and Boujee.” Streaming is key to Lamar’s success, too—that’s how he toppled Sheeran and why all 14 of those tracks are on the chart this week—but it’s a different caliber of Spotify success. Lamar’s latest isn’t going viral like those Desiigner or Migos hits, it’s being swallowed whole.

Of course Lamar, an eternally self-conscious performer who is keenly aware of his place in the hip-hop pantheon, knew his new disc and its leadoff single would be closely watched. As critics have noted, the entire Damn album—light on guests and less lush and jazzy than its predecessor Butterfly—was devised to reestablish Lamar’s street cred as a rapper’s rapper. “Humble” is equally self-conscious as a lead single. It’s simultaneously his most street-oriented radio track to date and yet also his most pop artifact. Kendrick balances the ascetic, almost sterile Mike Will Made-It production with cheeky moments guaranteed to generate drive-time and morning-show buzz: the aforementioned “just went VI-RAL!!” that Lamar practically whines, an incongruous rant against Photoshop and the Beauty Myth (“Show me somethin’ natural, like ass with some stretch marks”), a humblebrag about his invitation to the White House in the final year of the Obama presidency, and even a shoutout to clown figure the Sandman on the classic televised black variety hour Showtime at the Apollo. The single is Kendrick in miniature: lean, direct, and confident, yet populist and secretly approval-seeking. And that’s before you watch the cheeky, action-packed “Humble” video, a pastiche of watch-what-Kendrick-does-next: lying atop a pile of drug money being sorted by scantily clad female counters, sitting under a salon hair dryer, golfing off the roof of a car, presiding over a hip-hop Last Supper, rapping with his hair literally on fire. Already up to 120 million views, the video hasn’t hurt Lamar’s Hot 100 standing, either.

Early in 2016, hip-hop magazine Complex published a beautifully presented feature, “The Best Rapper Alive, Every Year Since 1979”—a rundown of the MCs who have defined rap’s history as a recorded medium, one per year. The piece is obviously subjective but clear-eyed and well-defended. Several rappers take a year’s B.R.A. title more than once, including Run, the Notorious B.I.G., Eminem, Jay Z, Kanye West, Lil Wayne, and Drake. (The article was so well-received and such a good debate-starter that Complex has decided to continue updating it every year: Early this year, Chance the Rapper was appended as the B.R.A. for 2016.) One interesting tension of the list is between rap-scene dominance and commercial success. There are moments when the Best Rapper is killing it on the mic but either far from platinum or years away from peaking on the charts (Kool Moe Dee, Rakim, Redman) and other years where the biggest rapper is also the Best Rapper (Snoop Dogg, Tupac, DMX).

Kendrick Lamar might wind up having both: the game-changing year and the commercially dominant year. He (deservedly) took Complex’s B.R.A. title for 2013, the year after Good Kid, M.A.A.D. City dropped and reinvented Compton rap for the ’10s but well before Lamar was routinely topping charts. One-third of the way through 2017, Lamar is strongly favored to take the title again. Should Kendrick achieve it, he would be among a select handful of rappers to be the Best Rapper Alive the same year they scored a No. 1 Hot 100 hit: Tupac in 1996, Biggie in 1997, Eminem in 2002, 50 Cent in 2003, Kanye West in 2007, Lil Wayne in 2008, and Jay Z in 2009. It’s an elite club—artists who, with a couple of exceptions (well, 50 Cent, mostly), have largely held onto their hip-hop bona fides even after their moment of crossover.

No doubt, Kendrick wants it all. Much is made of how Lamar is a culminating figure in hip-hop, amalgamating decades of rap history, putting his own spin and bearing the burden as rap’s leading light. But this is the same guy who happily befriended Taylor Swift two years ago and rapped on her remix—and, just this year, guested on a Maroon 5 smash—all the while learning a thing or two from these pop acts about drawing eyeballs. Lamar just ousted Ed Sheeran from the top of the charts, but as we get to know the new pop-savvy Kendrick, we probably shouldn’t be shocked or appalled if sometime before next year’s Grammys, K-Dot and the Ginger Hobbit are collaborating.