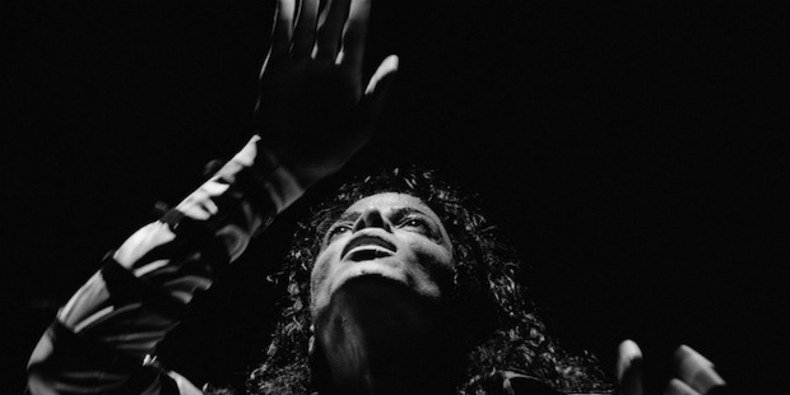 Hey, did you hear that awesome Michael Jackson song that popped into the Top 20 a month ago? It just materialized all the way up at No. 14 on Billboard’s Hot 100 one week in late May, and it was better than anything on the chart that week. Supple, propulsive, impossible not to dance to—it was a reminder of everything that made the late Jackson great.

The name of this killer cut? “Billie Jean”.

The all-time pop classic, which spent seven weeks at No. 1 in 1983, re-debuted on Billboard’s premier song chart, 31 years after it fell off, for a very modern reason: YouTube. In May, a video of high-school junior Brett Nichols recreating Jackson’s immortal Motown 25 performance of “Billie Jean” live in front of his whole California school, and absolutely crushing it, went viral. It racked up more than 11 million views in a week, according to Billboard.

Any YouTube video that uses at least 30 seconds of an original recording now counts toward that song on Billboard’s charts. So that huge viewing total sent “Billie Jean” to No. 2 on Billboard’s Streaming Songs chart; its streaming numbers among all songs that week were second only to 2014 chart-topper “Fancy” by Iggy Azalea. Because Streaming Songs is now a component of the Hot 100, “Billie Jean” was able to reappear on the big chart. For that one week, its No. 14 rank was actually two notches higher than “Love Never Felt So Good”, the “new” Jackson single reimagined by producer Timbaland and currently being promoted to radio by Sony.

YouTube did exist the year Jackson died, but it wasn’t a factor in Billboard. In 2009, the labels had only just stopped fighting YouTube, let alone figuring out how to monetize and generate hits on it. (The industry’s YouTube-partnering Vevo channel would launch six months after Jackson passed.)

What’s more, old songs like “Billie Jean” generally weren’t eligible to appear on the Hot 100 in 2009. A major overhaul of chart policy since then has reshaped both the single and especially the album charts—a liberalization Jackson’s death inspired. (More on that in a moment.)

But of course, what’s most poignant about the video of the 17-year-old Brett Nichols that sent “Billie Jean” back to the Hot 100 is the knowledge that the kid was basically a preadolescent when Jackson died. He stands in for the millions of millennials who’ve embraced Jackson since his death—a generational embrace of a performer whose best days as a performer were behind him when they were all born. Watching Nichols recreate Jackson’s galvanizing performance move for move—from hat-toss to moonwalk—is more a powerful homage to his legacy than any encomium you might have read this week on the five-year anniversary of Jackson’s death.

I wrote one of those encomia back in 2009, for my former Idolator column “100 & Single,” running down all of the amazing sales and chart achievements Jackson tallied during his lifetime. As I wrote at the time, “Jackson is one of very few acts for whom chart achievements serve as a fairly accurate barometer for artistic and cultural impact…We won’t see his like again.” To recap in brief, the feats I chronicled in that 2009 article were as follows:

Youngest act to top the Hot 100. When the Jackson 5’s “I Want You Back” reached the penthouse in January 1970, lead singer Michael was just shy of 11 and a half.

First act to launch with four No. 1 singles. “I Want You Back” was followed in Billboard’s top slot by the Jacksons’ “ABC”, “The Love You Save” and “I’ll Be There”, a then-unprecedented feat.

First R&B-to-rock chart crossover. Billboard’s Album Rock chart, launched in 1981, was still in its infancy when Jackson’s Eddie Van Halen–supported “Beat It” made its debut in April 1983. It peaked at No. 14 on the Rock chart, making Jackson the first African-American to score a serious AOR hit.

First song to debut at No. 1 on the Hot 100. Jackson’s last chart milestone came in 1995, when “You Are Not Alone” burst onto Billboard’s flagship chart in the top slot, another then-unprecedented feat.

Five years later, all of these records are essentially still intact: another testament to Jackson’s inimitable legacy. Obviously the “firsts” can’t ever be taken away—even though the Jackson 5’s record of four career-launching No. 1s was actually beaten in 1991 by Mariah Carey, who led off her career with five; and “Beat It”’s R&B-to-rock crossover was later outshone by bigger AOR hits like Robert Cray’s “Smoking Gun” or Lenny Kravitz’s “Are You Gonna Go My Way”. The debut at No. 1 by “You Are Not Alone” in 1995 is still notable, even though it has been followed by another 20 chart-topping debuts; such debuts have actually increased in frequency since Jackson died—seven more songs have duplicated the feat since 2009, including smashes by the likes of Eminem, Britney Spears, Lady Gaga and Ke$ha.

As for the other records, since 2009, the walls of Fortress Jackson have been scaled, but not breached. No one younger than 16-year-old Lorde has reached No. 1 since ’09, leaving 11-year-old Michael’s record intact. The Thriller record of seven Top 10s from a single album hasn’t been seriously challenged since Bruce Springsteen and Janet Jackson tied it in 1986 and 1991, respectively; since 2009 no one’s pulled more than six Top 10s in a single album-release cycle.

Just one Jackson record has been equaled since 2009, and it was nearly beaten: Bad’s quintuplet of No. 1 songs from a single album. In 2010–11, Katy Perry managed to tie the record with five chart-topping singles from the original release of her Teenage Dream album; if she hadn’t stalled at No. 3 with the album’s sixth single, “The One That Got Away” (apt title), she’d have taken the record from Jackson. (A subsequent No. 1 from a rerelease of the Dream album, “Part of Me”, doesn’t count for the record books.)

So the Jackson chart dossier holds up quite well. About the only chart or sales feats that have seen any change since Jackson passed happened within the first year after his death.

The big one was a change to Billboard chart policy with far-reaching effects: the elimination of the catalog rule preventing old albums and singles from appearing on the magazine’s flagship charts. Throughout the SoundScan era, Billboard had long maintained rules that removed old discs from the Billboard 200 album chart. Albums were yanked after they were older than two years and fell below the top half of the chart—lest discs like Journey’s Greatest Hits, Bob Marley’s Legend or Led Zeppelin IV ride the chart every week for eternity.

The problem, in the weeks immediately after Jackson’s death in the summer of 2009, was that his old albums Number Ones (2003) and Thriller (1982) became two of the top-selling albums in America; the former was actually the top-seller for a month and a half that July and August. But Billboard’s rule hid that fact from the public; chart-watchers were confused and frustrated that Jackson wasn’t scoring the posthumous No. 1 album he deserved. Finally, later that year, inspired by Jackson’s sales feats, the magazine changed the rule. Now on the Billboard 200, as much as one-fourth of a typical week’s chart may be older albums—Led Zeppelin and Pink Floyd fans have Jackson to thank for these stalwart bands being allowed to jostle for chart position with the likes of Iggy Azalea and Luke Bryan. On the Hot 100, Billboard also loosened its criteria for allowing old songs to reappear on the chart—any song with enough sales or streaming points to rank among the Top 50 is allowed to reappear on the chart. Beneficiaries since Jackson’s death have included the late Whitney Houston, the unkillable Bon Jovi and, as noted above, Jackson himself. It is appropriate, if depressing, that Michael would be the one to effect a change that reminds us, weekly, just how big old music is. After all, it’s the Jackson estate that has emerged as the biggest money-maker of any musical act, living or dead, since his passing.

The other change in the record books since Jackson died has been subtler, and oddly muted: the record for biggest-selling U.S. album. As noted above, on a global scale, Thriller bests all comers, even when sales-figure hype is taken into account. However, it’s been a tighter horserace at home, and in the record books of the Recording Industry Association of America (RIAA).

When Jackson died in June 2009, Thriller was actually one million in sales behind the Eagles’ perennial best-selling 1976 compilation Their Greatest Hits, 1971–1975—28 million for the former, 29 million for the latter as of that month, according to the RIAA. Indeed, the Eagles disc had quietly taken the record away from Jackson as far back as 1999. (The 90s were good to the Eagles—a decade in which they reunited and toured endlessly, and a new generation of Garth Brooks–era country acts cited the band as a formative influence, particularly the early country-flavored hits captured on the 1976 hits disc.) In my 2009 column on Jackson’s feats, I wrote, “You don’t have to be a virulent Don Henley-hater to find this standing offensive—a bloody hits compilation, topping one of the greatest original pop recordings of all time?”

In August 2009, however, less than two months after, Thriller was recertified by the RIAA at 29 million in sales. And that’s where the two discs still stand, nearly five years later—a two-album tie between the Eagles greatest-hits disc and Thriller as America’s all-time top-selling album. I think I speak for pop fans everywhere when I say it’d be nice if Jackson’s album could sew the record up already and retake the crown. Surely, Thriller has sold enough by now?

According to the helpful folks at Nielsen SoundScan, since Jackson’s death in the last week of June 2009, Thriller has sold just shy of two million copies (1.905 million). In that same period, the Eagles’ Their Greatest Hits 1971–1975 has only shifted about a half-million. Slam-dunk, right?

There are several problems with this back-of-the-envelope math, however. For one thing, the Eagles hits disc hasn’t been recertified since 2006; a full RIAA audit might well turn up a couple more million in sales, and prior to Jackson’s death Thriller wasn’t selling all that well (although a 2008 reissue undoubtedly helped). Additionally, SoundScan and the RIAA measure different things—albums sold and albums shipped. While many more music fans buy digital albums now, for stalwart acts like these two, physical goods still sell, and there are likely millions of Jackson and Eagles albums in the retail pipeline. Finally, albums are only recertified when labels request an audit from the RIAA. Sony (Jackson’s conglomerate) and Warner (the Eagles’) might well have their own reasons for holding off on asking for that next multiplatinum sales tier, including the possibility of mutually assured destruction.

Still, in all, five years later, it’s an anticlimax for Thriller to remain stuck at 29-times-platinum—tied with Glenn Frey and Don Henley, and with a triple-diamond certification tantalizingly close. Sony Music and the keepers of the Jackson estate have been heavily focused lately on getting Michael back on the radio and reanimating his live presence with smoke and mirrors. Honestly? If they really want to do his legacy justice, they should get the late Jackson the one career plaudit he loved more than anything: a sales record all to himself. Just ask Brett Nichols’s teenage classmates in that packed gym what album they think deserves the all-time title.