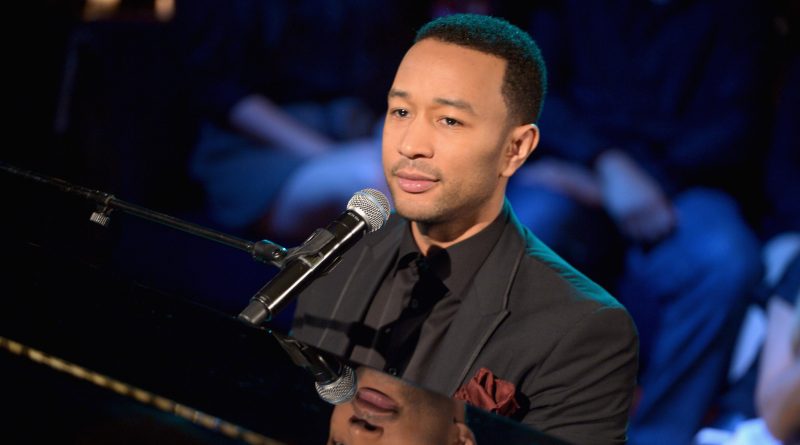 John Legend’s “All of Me”—the new No. 1 song on Billboard’s authoritative, all-genre Hot 100 chart—is a paean to crazy love, a passion that’s can’t be deterred by “curves” or “edges” or “imperfections.” Its lyrics pull the clever (or crass) trick of expressing universal relationship bromides in seemingly specific language, rather like a horoscope. Legend’s aching testimonial joins a long line of odes to lovesickness, the sort of “we’re both loony and suffocating, so we must be made for each other” ballads that American music fans have turned into hits time and time and time again.

But why is this particular song, by this balladeer, on top of our hit parade right now? It has something to do with patience and luck—and a Top 40 trend that just happened to swing Legend’s way.

“All of Me” has much in common with the song it replaces at No. 1: Pharrell Williams’s über-smash “Happy,” which finally departs the penthouse after a big 10 weeks on top. Both songs, performed by solo male singers, are fairly traditional, old-school R&B—up-tempo secular pop-gospel in Pharrell’s case, down-tempo torch balladry in Legend’s. And solo means solo: Like Pharrell, Legend handles performing duties without an assist from a featured singer. As I noted when “Happy” reached the top in early March, Pharrell not only sang but also wrote and produced his smash by himself; Legend nearly matches the feat, co-writing and co-producing “All of Me.”

The most uncanny coincidence between Williams’s hit and Legend’s is how long each man waited for his respective chart victory. “Happy” was Pharrell’s first chart-topper as a lead artist, in a varied 20-plus-year career as a writer-producer-performer. Now, just as Pharrell departs the top slot, in comes Legend, a singer-songwriter since the ’90s and a major-label act for a decade. In all that time Legend hasn’t so much as sung a hook on a Top 20 pop hit, let alone fronted a No. 1.

Born John Roger Stephens in Springfield, Ohio, Legend got his seemingly conceited stage name from none other than the master of conceit, Kanye West. The rapper-producer signed the former session musician (among other gigs, young John Stephens played piano on Lauryn Hill’s 1999 hit “Everything Is Everything”) to his G.O.O.D. vanity label. It was then that West dubbed him John Legend, in praise of the singer’s old-school voice. Legend made his debut for the label on West’s first album as an artist, The College Dropout, singing on the short album cut “Graduation Day.” Legend’s own major-label debut, Get Lifted, dropped via West’s label 10 months later. While it generated a modest Top 40 hit with the soul-baring ballad “Ordinary People” (No. 24 pop, No. 4 R&B, 2005), in general Legend wasn’t a hitmaker. His first three discs were critically acclaimed and all went either gold or platinum, but his presence on the radio—even R&B radio, let alone Top 40—was modest.

So for the 35-year-old Legend, the late-blooming “All of Me” is sweet reward after years of quieter success. But America really made Legend work for his hit.

“All of Me” has been around since last summer. It made its first Billboard appearance last September, bumping around the low rungs of the Hot 100 through the fall. As with most slow-cooking hits that lie dormant for months before exploding, a catalyst was required, and in Legend’s case it was the Grammy Awards in late January. His performance of “All of Me” on that high-rated awards-cum-variety show lit the spark. It generated hundreds of thousands of digital sales and YouTube views and, subsequently, spurred radio programmers to give the song another look.

Even then, Legend had to sweat it out: “All of Me” cooled its heels at No. 2 on the Hot 100 for six straight weeks, stuck behind “Happy.” It seemed destined to join the long, illustrious list of Billboard runners-up that got stuck behind behemoth chart-toppers. (Even if he spends only a week at No. 1, Legend has already done better than his fellow husky-voiced R&B crooner of a decade and a half ago, Brian McKnight, whose smash “Back at One” got stuck behind Santana’s “Smooth” for eight weeks.) Indeed, Legend probably shouldn’t get too comfortable: According to Billboard, “All of Me’s” chart points—which are based on the Hot 100 formula of digital sales, radio airplay and online streams—edged his two closest competitors by less than half a percentage point: not only “Happy,” but also the new No. 3–ranked hit “Problem” by Ariana Grande featuring Iggy Azalea. It was a photo finish, and Legend’s stay out front will likely be brief.

Billboard also reports that “All of Me” ranks among the slowest-climbing No. 1’s in Hot 100 history. The song took 30 weeks to ring the bell, just shy of all-time record-holders “Macarena” by Los Del Rio (33 weeks) and “Amazed” by Lonestar (31 weeks). Those other songs benefited from an old slow-hit trick, the two-part format crossover: After an initial chart run, each was heavily remixed to garner separate Top 40 airplay (“Macarena” converted from an all-Spanish Latin-radio hit to a half-English club/pop tune; “Amazed” redone from a country smash to a pedal-and-fiddle-free pop ballad). By contrast, “All of Me” was the same song for most of its epic chart run. A dance remix by EDM god Tiësto was finally dropped in late February, deep into the song’s release and well after it had begun scaling pop playlists. The remix helped “All” go the last mile at tempo-hungry Top 40 radio, but many stations have kept the original, stark ballad in their rotations.

So how did Legend pull off this coup? Haven’t radio programmers largely given up on melodramatic tunes like Legend’s? In the ’80s and ’90s, torch ballads were a major part of the furniture on Top 40 playlists, but in our current era of Portable People Meter–driven radio ratings, stations typically demand up-tempo songs that “surge” to keep listeners glued to their stations. How did “All of Me” get past that bias?

Arguably, Legend can thank a lady who hasn’t been on the radio herself in over a year: Adele—and specifically her unlikely 2011 smash “Someone Like You,” the second of three No. 1 hits from her colossus 21. When it reached the top in the fall of 2011, “Someone” became the first piano-and-vocal-only No. 1 hit in the history of the Hot 100. (That may sound surprising, given the sorts of songs that were hits a half-century ago, but pop radio fans have long preferred songs with a beat.)

“Someone Like You” found a new lane for balladry on the superhighway that is contemporary radio. Rather than compete with up-tempo pop on its own high-gloss terms, ballads would demand listeners’ attention by going bleaker. Since Adele’s game-changer, other pop acts have succeeded in replicating its bare-bones format. Bruno Mars, the genre-crossing pop star, scored a No. 1 hit a year ago with the drumless “When I Was Your Man,” and the equally adaptable Rihanna reached No. 3 with the downright ascetic “Stay.” Over the winter of 2014, indie-leaning hits by Passenger and A Great Big World made the Top Five, each one riding the New Stark wave. Legend’s “All of Me” fits squarely in this trend and, according to Billboard, is now the Hot 100’s third-ever piano-and-vocal-only chart-topper, after Adele’s and Mars’.

But Legend was doing stark when stark wasn’t cool. This is actually his second Top 40 hit to consist of little more than a baby grand and a voice. His aforementioned 2004 breakthrough, “Ordinary People”—still, in my opinion, the best thing he’s ever done—was just as unadorned and understated, Legend’s dry voice cracking against the tinkling of ivories. The simplicity of the arrangement complemented the words to “Ordinary People,” which tackled the challenging, complicated emotions of long-term relationships with directness and empathy.

With almost exactly 10 years separating Legend’s first hit from his biggest one, it’s worth asking what’s different this time around. The post-Adele New Stark thing is a cultural wave Legend was lucky enough to ride, but the sappier lyrics of his new song probably helped as well. An ode to love-you-no-matter-what, “All of Me” is an easier sell than “Ordinary People,” an ode to love-is-hard. Still, Legend has enough fine work in his discography that it would be churlish to begrudge him his fluke smash, however sappy it may be. And besides, we’ll always have “Nutmeg.”

Previously in Why Is This No. 1?
Pharrell’s “Happy”
Katy Perry’s “Dark Horse”
Pitbull and Ke$ha’s “Timber”
Eminem’s “The Monster”