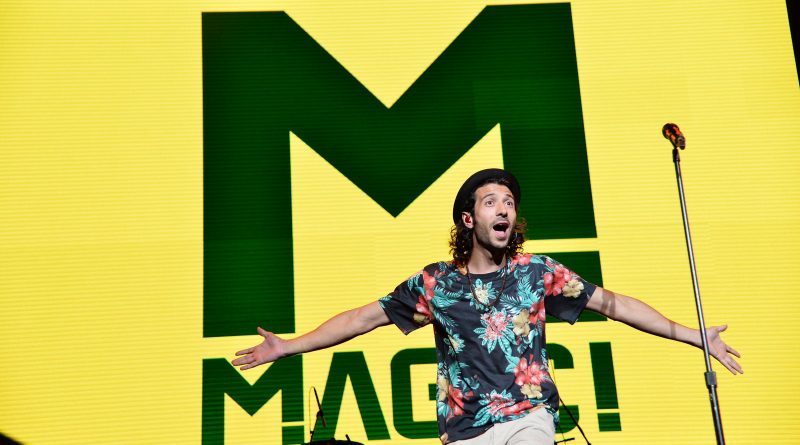 If you need evidence that America is having its ’90s-revival moment—right on the two-decades-later nostalgia schedule—look no further than “Rude” by Magic, the new No. 1 on Billboard’s Hot 100 pop chart. “Rude” is essentially an amalgam of two smash hits that rode the Top 10 together in the spring of 1993: the Spin Doctors’ “Two Princes,” from which it borrows its hey-pops-let-me-marry-your-daughter lyrical theme and knit-cap sartorial style; and Snow’s “Informer,” the last Canadian reggae tune to reach the top spot.

That’s right, Canadian: The four guys in Magic, the first band of Canucks to top the Hot 100 since Nickelback more than a decade ago, hail from the Toronto area, just like Darrin “Snow” O’Brien. So why are all these Great White North folks jammin’?

Southern Ontario has long incubated a West Indian musical subculture, dating back to the ’70s and such Jamaica-born, Toronto-dwelling pioneers as Jackie Mittoo and Noel Ellis, as well as later homegrown acts like Messenjah. In America, the licky-boom-booming Snow is regarded as a one-hit wonder, but in Canada he scored a few additional hits. And, as Slate’s own Toronto-based Carl Wilson reminded me, Snow is more of an Eminem figure than a Vanilla Ice: He was from the Toronto neighborhood settled by Jamaican émigrés, made his bones in its dancehall scene, spent time in gangs, and was even doing a prison stint when “Informer” scaled the charts.

If Snow was an organic product of Toronto’s reggae demimonde, Magic—who style their name MAGIC!—are more synthetic spawn. The band’s frontman, Nasri Atweh—a bedroom-eyed, overly confident singer/songwriter/producer—formed the “reggae fusion” group with his Toronto buddies just two years ago. This followed a modestly successful Canadian solo career and a much more successful L.A.-based career as a pop songsmith. Teaming with fellow Toronto writer Adam Messinger to form songwriting duo The Messengers, Atweh co-wrote and produced singles over the last half-decade for such acts as Justin Bieber, Chris Brown, Pitbull, and the reunited New Kids on the Block.

While Nasri—who goes by his first name, like Cher—claims to be uninterested in the limitations of genre, Magic’s just-released debut album rides hard atop a CHUNK-a, CHUNK-a Marley-lite beat that varies only modestly from song to song. “Rude” is probably the band’s simplest tune of all. Co-written by the band with Nasri’s partner Messinger, it features a simpering chorus that, were I an intransigent father, would make me tell the dude to man up: “Why you gotta be so rude?/ Don’t you know I’m human, too? … I’m gonna marry her anyway.” (Kinda passive, brah.) Never mind the fact that not blessing the marriage proposal of your daughter’s boyfriend isn’t “rude,” exactly. The song’s Sunsplash vibe also feels disingenuous—this is reggae as all-purpose man-keeping-me-down music. (The narrator’s lightweight sufferings are about two degrees and a female backing chorus away from this 20-year-old Adam Sandler song.)

Still, by the most basic definitions of rhythm and genre, “Rude” is reggae. Indeed, it’s the first reggae-based song to reach No. 1 in this country in at least seven years. And by the way, we are the only country that’s made “Rude” a No. 1 hit: In Canada, where its airplay was likely boosted by radio’s CanCon rules, it only reached No. 6; in Australia, where the band broke about half a year ago, “Rude” peaked at No. 2.

So why did “Rude” hit No. 1 here? Answering that question means exploring America’s strange, dysfunctional relationship with reggae as a whole. You’d think that music with such a close kinship to American sounds—whose talking-rhythm tradition of toasting over amplified soundsystems actually helped lead to hip-hop—would be a permanent fixture on the radio. But instead, broadly speaking, about once a decade, we seem to experience a short-lived fever for reggae riddims (or facsimiles thereof). So the short answer to why the not-so-rude boys of Magic are on top now is that, four and a half years into the ’10s, we were probably due.

The last time a reggae-like song topped the Hot 100 was in 2007, when Sean Kingston took his Ben E. King–interpolating summer jam “Beautiful Girls” to the pinnacle. But we probably shouldn’t count that essentially R&B-based song as reggae. In which case “Rude” is the first Hot 100 chart-topper to sport a Jamaica-derived riddim since a pair of dancehall smashes by Sean Paul in 2003 and 2006. In an article last week announcing “Rude’s” leap to No. 1, Billboard helpfully ran down a roster of other such Hot 100 chart-toppers:

America, we need to have a talk. Not just about how you collectively decided to give the wan Magic a No. 1 hit, but about this sorry list of reggae-based chart-toppers. There are a couple of gems on that roster, but given Jamaica’s rich 50-plus-year history of ska, rocksteady, and reggae, we could, and should, have done better.

I’m not even sure I’d count all of the songs Billboard lists as reggae. Maxi Priest is a legitimate reggae lifer, and 1990’s “Close to You” is a groovy pop song, but despite its island vibe, it’s all rhythm, no riddim—closer to turn-of-the-’90s new jack swing and pop-house. And while Eric Clapton deserves a few taste points for covering Bob Marley back in ’74, in its studio version his “I Shot the Sheriff” so completely smooths out Marley’s rhythm that it’s barely reggae at all. (Ironically, Clapton’s later hit cover of Bob Dylan’s “Knockin’ on Heaven’s Door” sports a much more obvious reggae beat.) And if Billboard is going to count Clapton’s “Sherriff” it’s unfair not to include Blondie’s 1981 No. 1 “The Tide Is High,” a very faithful cover of the Paragons’ classic ’60s rocksteady tune,

Even the seemingly more authentic tracks on that list are in some way watered down or sanitized for U.S. consumption. “I Can See Clearly Now,” America’s first reggae-based No. 1, is a total radio classic. But Johnny Nash was more reggae emissary than forefather: Born in Houston, he was an easy-listening balladeer for more than a decade and only began recording in Jamaica in 1968, when he had the great fortune to meet the early Wailers (a fraction of Bob Marley’s band wound up backing Nash on “Clearly”). Closer to the present day, Jamaica-born, Brooklyn-reared Shaggy was several albums into his career before making it really big in America in 2001. In the U.K., Shaggy had been to the top of the charts as far back as 1993 with a shrewd and faithful cover of a Jamaican classic, the Folkes’ Brothers’ “Oh Carolina.” Over here, he didn’t get to No. 1 until “It Wasn’t Me” and “Angel”—a sex-laced meme-song and a reggaefied version of an oft-covered ’60s torch ballad, respectively.

This discrepancy in Shaggy’s career is particularly telling: The United Kingdom has a far better track record than we do of ska and reggae-based hits. Of course, that’s largely due to Old Blighty’s centuries-long colonial rule of Jamaica until 1962, and the generations of Jamaican diaspora living in England. Still, considering that the U.S. has plenty of Jamaican diaspora, too, and that we’re geographically more proximate, you’d think we might have done better.

Song for song, the U.K. just crushes us when it comes to Jamaica-based music. As fine as that aforementioned Johnny Nash record, is, you know what’s even better? “Israelites” by Desmond Dekker and the Aces, which was the first-ever reggae No. 1 on the U.K. charts in 1969. (We’re not totally clueless in America—that song did scrape our Top 10.) Other delightful British No. 1s include wondrous one-hit wonders Althia and Donna, with 1978’s “Uptown Top Ranking”; 1982’s gimmicky but indelible “Pass the Dutchie” by Musical Youth (No. 1 there, No. 10 here); and 1999’s “Turn Your Lights Down Low,” Lauryn Hill’s loping update of/duet with her late father-in-law Bob Marley. Even the U.K.’s white, second-wave-ska chart-toppers—like the Specials’ great, spooky 1981 “Ghost Town”—are first-rate.

It might seem unfair to focus only on chart-toppers when comparing American and British reggae hits. What about the Jamaican acts we do worship, like Bob Marley? We gave him no Top 40 hits, and have mostly contented ourselves with his posthumous greatest-hits album. In England, Marley scored a half-dozen Top 10 hits while he was still alive. There’s also been lots of crossover between reggae and punk, postpunk, and alternative music; as the great 1995 PBS series Rock and Roll: An Unruly History recalled, in the late ’70s “it seemed as if every punk rocker started to walk with a skank.” But again, the Brits—from the Clash to the Police to Elvis Costello—did so much more with reggae than the Yanks did. America’s Blondie actually wrote future No. 1 hit “Heart of Glass” as a reggae song but were convinced to turn it into disco because, producer Mike Chapman told them, “Americans don’t buy reggae.” (Unless it’s Sublime, a band we seem unwilling to let die.)

What’s most bizarre about America’s periodic interest in reggae is the way it comes on like a two-to-three-year fever each decade—and then recedes, never becoming a regular part of the pop stew like club music or hip-hop. Take a close look at that aforementioned Billboard list of reggae chart-toppers. With one exception—UB40’s cover of Neil Diamond’s “Red Red Wine” in 1988, which was actually recorded in 1983—they all appeared in the first half of the decade. Even below the No. 1 spot, American reggae hits seem to wash up like swells. From 1982 to 1984, we sampled everything from Musical Youth to Culture Club’s clever reggae appropriations to Guyana native Eddy Grant. And then we were done. A decade later, a ’93–’94 wave of pop hits by Snow, Inner Circle, UB40 (again), Big Mountain, and Ini Kamoze made the Hot 100 momentarily skanky. Then, despite a mid-’90s wave of ska-core on alternative radio, it was over. (Big Top 40 radio acts like No Doubt did better with their pop songs than their jams.) The early ’00s, a period heavy with hip-hop, saw probably the warmest embrace of Jamaican sounds to date: 2003 found 50 Cent rapping over marimba, Sean Paul teaming with Beyoncé, and Jamaica’s hottest beat, the handclapping Diwali Riddim, appearing on three U.S. Top 40 hits by Paul, Lumidee and Wayne Wonder. But the Hot 100’s mid-decade pivot toward digital dance-pop put an end to that ripple.

So give Magic credit for checking their watches and seeing that Americans were due for a cuddly reggae hit for the mid-’10s. If there’s one last, kind thing you can say about “Rude,” it’s that right now, it’s a wave of one: No other pop act is mining that rhythm at the moment, so deeply are our radios devoted to electronic club-pop and stark ballads. I propose that those of us who find “Rude” noisome save up our rage for the even more mediocre faux-Caribbean jams that may very well arrive in its wake. Jah help us.

Previously in Why Is This Song No. 1?
Iggy Azalea’s “Fancy”
John Legend’s “All of Me”
Pharrell’s “Happy”
Katy Perry’s “Dark Horse”
Pitbull and Ke$ha’s “Timber”
Eminem’s “The Monster”