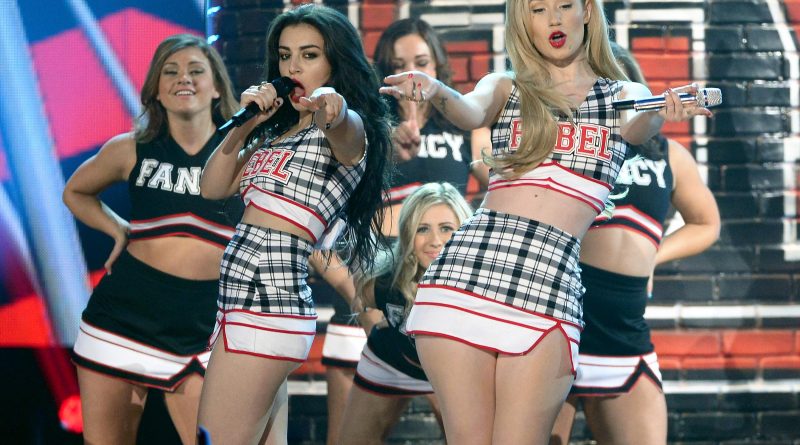 Last week, Vulture’s Amanda Dobbins wrote a piece bemoaning the “default Song of Summer” status achieved by “Fancy,” the Iggy Azalea hit featuring Charli XCX. Now in its seventh week at No. 1, “Fancy” has topped Billboard’s Hot 100 since the start of June, essentially the whole summer to date.

Since the Song of the Summer is now an American pastime, like baseball—tonight’s All-Star Game marks the halfway mark of the season—it’s worth asking: Is it all over but the crying? Like “Blurred Lines” last year, which upset presumptive favorite “Get Lucky” before June was complete, do Iggy and Charli have the title already? I said as much to the gang at the Slate Culture Gabfest last month, and at that point the song was heading into just its fourth week on top.

In her delightful rant, Dobbins makes clear that the point of this sport is to pick one winner:

This is usually when someone raises his hand and is like, “Oh, I’ve really been enjoying the new Spoon single, that’s my Song of Summer.” Which … no. Let’s be clear about how this works: There is no such thing as a “personal” song of summer. We do not anoint multiple songs of summer. There can only be one; the Song of Summer, by its very definition, is a consensus choice. It is the song that wrecks wedding dance floors. It is the song that you and your mother begrudgingly agree on (even though your mom has no idea what rhymes with “hug me” and won’t stop yelling it in public). It does not necessarily have to hit No. 1 on the charts, but it should probably be on the charts, because it must be widely played. It must bring people together. It must be a shared enthusiasm.

You might think I’d disagree; along with Chris Kirk, I created a whole interactive song generator to help you pick your own Song of the Summer for 2014. But when it comes to the culture at large—and especially the charts—Dobbins is right: Each summer, one song tends to dominate. As a chart nerd, I take a dim view of any claim that more than one song was tops for a week, a summer, or a year; of course we can and should remember many songs when we think back to these periods, but the whole point of chart-following is to determine who’s No. 1.

So, fine. Let’s look at this from that perspective and only consider chart data—not just from this year but from summers past. Billboard has made this easy: Since 2010, the magazine has maintained an annual Songs of the Summer chart that runs from Memorial through Labor Day, isolating Hot 100 data during those months. And when Billboard’s editors launched the chart, they went back an additional quarter-century, combing through past Hot 100s to determine the top summer songs every year since 1985.

Bottom line, looking at all this data, the odds are indeed stacked against anything upsetting “Fancy.” In the SoundScan era (about which more below), and especially the digital era, it’s rare for a song to emerge after the 4th of July and wind up the Song of the Summer. Though it’s not impossible.

First, just how big a hit is “Fancy”? Looking at the three components Billboard bakes into the Hot 100, it is mighty indeed:

Sales: From the chart weeks encompassing Memorial Day to Independence Day, “Fancy” sold 1.3 million downloads. That’s the most any song has sold in that six-week period. It beats the second best-selling song—the 1.1 million–selling “Rude” by MAGIC!—by more than 200,000 downloads.

Radio: “Fancy” has been the most-played song at U.S. radio for roughly the last month; in late May and early June it was stuck behind John Legend’s winter-into-spring hit “All of Me.” According to Billboard, since Memorial Day “Fancy” has amassed a cumulative audience of 1.03 billion “listener impressions”—assuming “All of Me” doesn’t qualify as a Song of the Summer contender, that’s certainly the biggest audience of any hot-weather hit.

Streaming: This tally combines YouTube views and Spotify streams, among other elements. “Fancy” has been totally dominant there—eight weeks as the most streamed song. Over that span, Billboard says it has been streamed in the U.S. 94 million times. That’s thanks mostly to its Clueless-inspired video, which is up to 150 million global views at YouTube/Vevo.

More important than any of this data, though, is Azalea’s timing—she went to No. 1 the week after Memorial Day, which gives her a huge historical advantage. Summer in the U.S. lasts 14 weeks—bookended by our May and September national holidays, not the solstice and equinox—and the mid-period is on or around July 15. So for the sake of this historical analysis, I’ll define a second-half summer hit as one that reached its peak (i.e., first hit No. 1 on the Hot 100) the week ending July 15 or later.

In the first few years of Billboard’s historical ranking of summer songs, late-summer hits actually did very well. All but one of these seven summer-dominators swelled after the middle of July—and the exception, Heart’s “Alone” in ’87, missed by only one week:

But here’s the thing: Prior to November 1991, the Hot 100 was a pre-computer chart, without the benefit of Nielsen SoundScan data. One big thing we learned after SoundScan was adopted by Billboard in ’91 is that hit songs and albums move up the charts faster than we thought. So it’s likely that several of these late-’80s/early-’90s chart-toppers would have reached the penthouse a few weeks sooner if the more accurate data had been available. You can see the pattern shift when you look at a baker’s dozen of summer-toppers that came after SoundScan went into effect on the Hot 100—only six out of these 13 seasonal smashes (shown in bold) peaked after midsummer:

In 2005, Billboard made another major change to its charts: the adoption of digital downloads via iTunes and other online song-sellers. That made Hot 100 hits go viral even faster and achieve chart dominance earlier (the addition of Spotify to the charts in 2012 and YouTube in 2013 only accelerated things). Take a look at the next 10 years—a total reversal of what we saw on the pre-SoundScan charts, as all but one Song of the Summer peaks before July 15:

All in, over 22 data-accurate years on the charts from 1992 to 2013, late-summer songs have won the summer battle only seven times.

But again, it’s not impossible. So the last question is, what does it take for a July/August peaker to take the title? What should “Fancy”-haters like Vulture’s Dobbins (who is not alone in her distaste) be rooting for?

When mid-to-late-summer smashes like Usher’s “Confessions Part II” or LMFAO’s “Party Rock Anthem” succeed, it’s usually because that year’s early-summer dominator is actually a spring dominator drifting into summer. In 2004 and 2011, respectively, that’s how Usher and LMFAO prevailed, as each was defeating a song that hit the top back in mid-May: Usher surpassed his own spring No. 1 “Burn,” and LMFAO overtook Adele’s long-lived “Rolling in the Deep.” Unfortunately, that’s probably not going to work for non-“Fancy” contenders this year, because all of Iggy Azalea’s fat weeks of data have come just after Memorial Day and will count for Billboard’s Song of the Summer tally.

Honestly, at this point, if you really can’t stand “Fancy,” you’re going to have to root for a song Dobbins didn’t mention in her piece (perhaps intentionally): the aforementioned “Rude” by MAGIC! The Canadian reggae song has been parked at No. 2 on the Hot 100 for two weeks and is expected to replace Azalea at No. 1 within a week or two. But to take the cumulative summer title, it’ll have to rack up huge numbers from here on out. “Rude’s” summer sales gap with “Fancy” of 200K is certainly closeable by Labor Day; but it’s got a ways to go to defeat Azalea’s cumulative totals in airplay and especially streaming. The “Rude” video is cute but not Clueless-cute, and it currently has less than one-fourth the YouTube views of “Fancy.” It’ll be an uphill battle, to be sure.

Plus, there’s the little matter of having to root for “Rude.” If nothing else, that just might make you appreciate the charms of “Fancy.” I, for one, welcome Ms. Azalea, our new Song of the Summer overlord.