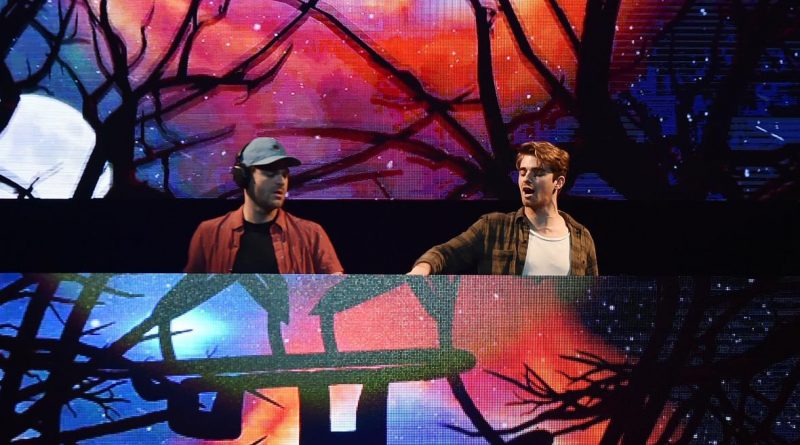 For the first 10 seconds, the song sounds like it’s building to something monumental: thundering piano chords, sweeping synth washes, and a swelling echo like you’re down in a vast ravine. And then, at 0:11 … click. It all switches off like a lamp—a finger-snap and a meek “Hey,” as the melody downshifts to two-finger keyboard notes. In a near-murmur, the singer offers confessional lyrics in therapy-speak: “I was doing just fine before I met you/ I drink too much, and that’s an issue/ But I’m OK.” There is no “drop”—the thunderous climax of club-rattling electronic dance music—and there never will be one.

The electronic-dance music duo who call themselves the Chainsmokers have done something even more bro-tastic than dropping the bass. You’ve just been punk’d.

“Closer,” the new No. 1 song on Billboard’s Hot 100, opens with this musical head-fake. It’s reminiscent of the Chainsmokers’ entire career to date, which reads as one long con. The New York–based duo of Andrew Taggart and Alex Pall—smirky DJ-producers who broke less than three years ago with the crass, sexist novelty hit “#Selfie” and subsequently made asses of themselves on American Idol—are now not only one of top 40 radio’s most consistent purveyors of mass-appeal melodic pop, they have recast themselves as credibly emo electro-bros. (One of “Closer’s” verses cites actual emo-punk band Blink-182.) Either these dudes have uncovered hidden depths as songwriters just this year, or they are gaslighting us with a simulacrum of human feeling. Probably both.

Assisting the dudes in their emotional rescue is featured singer Halsey, who duets on the track with Taggart, the Chainsmokers’ primary songwriter. Her yearning vocal deepens “Closer’s” brooding ambiance. Even in a year where it seems every other hit is oddly wistful, “Closer” stands out for its tone of small-scale regret writ large.

The song’s protagonists are a guy and gal four years out from a short-lived romance, now re-encountering each other in a hotel bar. (Better that than a hotel lobby, which as we all know leads to moral turpitude.) This is a hit song in 2016, so of course the pair are eager for a sweaty hookup—each sings, “I can’t stop/ No, I can’t stop,” and by the chorus they’re in the “backseat of your Rover … Bit[ing] that tattoo on your shoulder.” But it’s the song’s asides that color in the sincere melancholy of the romance: “I know you can’t afford” the aforementioned Range Rover, the singer notes, adding that they should take their coupling to “the mattress that you stole/ From your roommate back in Boulder.” With these details the vocalist manages to both dress down the paramour and warmly recall their earlier, ramen-for-dinner–era romance. The chorus finally builds to a piercing, desperate mantra: “We ain’t never getting older/ No, we ain’t never getting older.” In essence, this cannily timed song—dropped in late July and topping the charts in late August, in time for back to school and the moment when America’s Danny Zukos recall their Sandy Olssons—is Don Henley’s “The Boys of Summer” for the age of Snapchat.

Timing aside, it’s fair to ask how a musical Polaroid this minimalist—seriously, those synths on the verses sound like the preset on a 1982 Casio keyboard—scaled the charts so fast. Perhaps Halsey is the X-factor? The singer born Ashley Nicolette Frangipane in New Jersey in 1994 has been positioned as a rising star for some time now. After amassing tens of thousands of YouTube followers as a teenager and signing to dance-music label Astralwerks at age 18, Halsey has steadily built her pop profile over the last year: dropping a strong-selling album late last summer, earning admiring reviews for her Lorde-meets–Lana Del Rey cerebral pop, and drawing buzz for her foul-mouthed cover of Justin Bieber’s “Love Yourself.” (She sang it uncensored, with the word songwriter Ed Sheeran actually meant for “love” intact.) But to date, Halsey hasn’t been a big hitmaker. Her only Hot 100 hit as a lead artist, “New Americana,” peaked at No. 60 in January, and prior to “Closer,” Halsey’s sole appearance in the Top 40 was as a featured singer on her pal Bieber’s minor hit “The Feeling” (which topped out at No. 31 last December).

So while it’s tempting to give much of the credit for the Chainsmokers’ first chart-topper to its alluring featured singer, the fact is they are currently a bigger name than she is. Their growth as hitmakers has been rapid: “Closer” is the EDM duo’s third straight Top 10 single this year, each hit bigger than the last. “Roses,” a No. 6 hit in February, was followed by “Don’t Let Me Down,” which peaked at No. 3 in July. So potent is the Chainsmokers’ brand at this point that when “Closer” dropped in late July, it was received as an insta-smash, debuting on the Hot 100 all the way up at No. 9 and zipping to No. 6 and then No. 1 in just three weeks. For two of those three weeks, it’s been America’s best-selling digital song; last week, on on-demand audio services like Spotify, “Closer” ousted Drake’s “One Dance” after nearly four months as the most-played song; and this week, “Closer” took over as the most-streamed song, period, across all online services including YouTube. Radio, always late to the party, is catching up—Billboard reports that “Closer’s” airplay audience was up more than 40 percent last week. All that for a modest ditty about a couple having a tawdry reunion sex in a broken-down SUV. 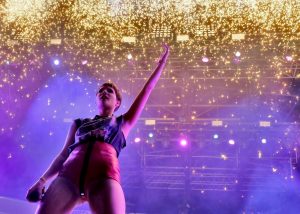 The duo’s new hit features Halsey (seen here at Coachella), but the Chainsmokers are much bigger hitmakers than she is.

Perhaps “Closer” came in like a tropical storm because it followed the Chainsmokers’ patented template. All three of their 2016 smashes have prominently showcased a brassy female vocalist. “Roses” was actually named after its singer, Philadelphia-based Elizabeth “Rozes” Mencel; and “Don’t Let Me Down” showcased Pittsburgh teenager Grace Martine Tandon, who goes by the sobriquet Daya. Each of these Chainsmokers hits was marked by lovelorn lyrics (“Take me back to a time when only we knew,” sighed Rozes; “Now there’s nobody by my side,” moaned Daya) and echoey, bone-shaking sonics. In fact, the Chainsmokers have always relied on bold female singers—dating back to the quippy “#Selfie,” which was rapped in a Valley Girl–esque sprechgesang by vocalist Alexis Campisi—but their 2016 hits have honed the formula to a drama-diva kernel. In these dance-floor arias, a woman’s presence is essential; but Taggart and Pall have made the specific female voices ultimately interchangeable.

Halsey has by far the highest profile of any of the Chainsmokers’ collaborators to date, and she’s a more distinctive vocalist than Rozes or Daya. But I suspect that what really set “Closer” apart and made it a chart juggernaut was the fact that it’s a true, traditional duet. (As the Singles Jukebox’s Crystal Leww notes, actual duets are rare in EDM.) Remarkably, this is the first Chainsmokers track on which Andrew Taggart sings. It’s as if, having written the song (with co-writers Shaun Frank and Frederic Kennett) as a he-said-she-said tête-à-tête, Taggart realized he wouldn’t be able to sit this one out. Given that he made his name behind the boards and not in front of a mic, Taggart’s voice is modest and underwhelming (not unlike DJ and froggy singer Calvin Harris or, from an earlier era, trumpeter-turned-improbable-singer Herb Alpert). But Taggart’s vocals suit the low-grade mood of the track and set the tone upfront.

Halsey doesn’t even show up until the song is more than one-third over, taking the second verse as a restatement and response to Taggart’s: “You look as good as the day I met you,” she confesses. “I forget just why I left you—I was insane.” If the song’s overall mood is “Boys of Summer,” its structure is borrowed more directly from an even bigger ’80s hit, “Don’t You Want Me”: the Human League’s summer 1982 chart-topper that tells the story of a man (Phil Oakey) who made a cocktail waitress both his girlfriend and a star, with an instant rejoinder from that lady (Susan Ann Sulley) that she’d have done just fine without him. (In that case, they met in not a hotel bar but a cocktail bar.) “I still love you—but now I think it’s time I live my life on my own,” Sulley sang on that hit, anticipating both Halsey’s helpless romantic nostalgia and the dressing down of her broke-ass former lover. He-vs.-she duets like this may not be a common formula, but as both the Human League’s and the Chainsmokers’ respective, synth-powered No. 1 hits prove, they connect with the public, which loves a good story-song.

After all of their Hot 100 smashes, you might think the Chainsmokers would have dropped a smash album to match. But to date, they have yet to release a full-length LP. That either means the duo are too busy enjoying the high life as well-paid party-starters or, more plausibly, they are creatures of dance and DJ culture, wherein the single, not the album, is the thing. As we enter the back half of the 2010s, one has to marvel at the resilience and sturdiness of EDM, which has defined the center of pop music since, arguably, the late aughts—taking flight with Daft Punk’s 2006 live comeback and entrenching in 2008–09 with the rise of frontline singers like Lady Gaga. This means EDM has, as a centrist pop force, outlasted the roughly five-to-seven-year zeitgeist moments of two predecessor genres: disco (prematurely declared dead in 1980) and new-wave synthpop (toppled by hair metal and diva-pop around 1986). As a business, at least, EDM has itself recently been put on life support, especially after the festival and Vegas-rave circuits began to implode.

That’s what makes “Closer” so of the moment. It’s an electronic dance song to which you can’t really dance or scarcely even bob your head—EDM made for swooning and crooning, not getting rocked. Dance music has for decades celebrated the chillout track, the slower-tempo cut built for the wee hours as the club is shutting down. But from its tentative lyrics to its gentle pulse, “Closer” isn’t just an elegy for the end of the night but, perhaps, the end of an era. It mourns the passage of time, the ultimate comedown: We are ever getting older.