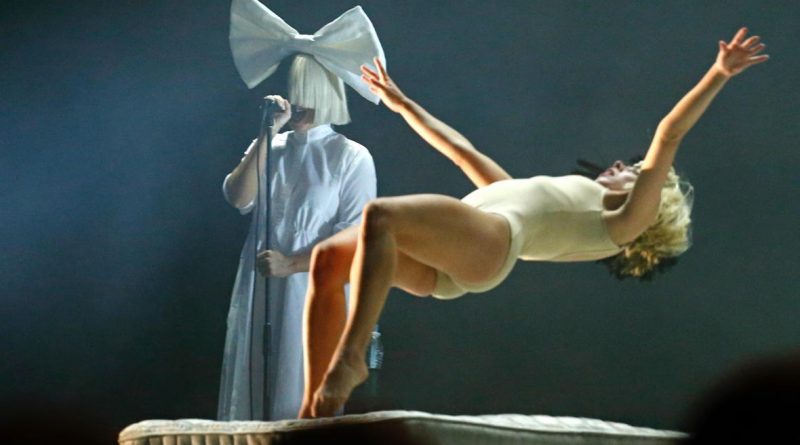 Eighty-five years later, Australian singer-songwriter Sia Furler has sung the same sentiment while adjusting it for inflation: “I got all I need—no, I ain’t got cash/ I ain’t got cash/ But I got you, baby/ Baby, I don’t need dollar bills to have fun tonight/ I love cheap thrills!

These words come from “Cheap Thrills,” the loping dance-pop single that crowns Billboard’s Hot 100 this week. It’s the first No. 1 for Sia (who goes by her first name as a recording artist) in a nearly two-decade career as a singer-for-hire, an unlikely scribe of pop hits, and an even unlikelier pop star. It also fells a mighty oak, taking the top spot from Drake’s “One Dance.” If you’ve been out and about anywhere in America recently, you’ve probably heard that Drake ditty, too—it’s the moody song about a morose gentleman who’s drinking his Hennessey and cutting a rug one last time before a “higher power” ushers him to the choir invisible. (I like to picture Drake singing this chorus in a straw boater and white spats. I’ll bet Jimmy Fallon could hook that up.)

Nominally, both of these smashes, “Cheap Thrills” and “One Dance,” are club jams. But in this summer of Trump vs. Clinton, it’s hard not to hear a certain resigned, depressive, even Depression-like melancholy on the pop charts—even on the hits that are ostensibly upbeat. Sure, both songs qualify as summery, thanks in no small part to their debts to island riddims: Like Drake’s hit, built atop dancehall beats and samples from “U.K. funky” artist Kyla, Sia’s “Thrills” sports a post–tropical house beat and, on its radio edit, a guest performance by dancehall demigod Sean Paul, who already has multiple No. 1 hits dating back to the early ’00s. But all that thump is in service to songs that waft more than they bang—a tone set by their despondent singers.

Thanks to Drake, the charts have mostly felt like a sideshow this season. It’s the end of July, and amazingly, Sia’s “Cheap Thrills” is the first new No. 1 song of summer 2016. A brief recap: “One Dance” reached the top way back in mid-May, and though Justin Timberlake’s irrepressibly cheery “Can’t Stop the Feeling!” briefly appeared poised to dominate this year’s Song of the Summer sweepstakes, it was over before we even got past Memorial Day—“One Dance” spent a total of 10 weeks at No. 1, thanks mostly to Drake’s dominance on streaming services like Apple Music and Spotify.

Eventually, something else had to be No. 1 in America, and two months ago I would not have picked “Cheap Thrills,” or Sia Furler, as the likely Drake-slayer. Frankly, neither would she. This is the woman who, in her live appearances and performances, hides her face with crazy wigs, Unknown Comic–style, and whose music videos feature a similarly platinum-wigged tween girl in a leotard playing Sia’s mini-me. And that’s just the visuals—with her quavering voice, aching melodies, and lyrics that sound sad even when they’re about partying, Sia, at age 40, is 2010s pop’s self-abnegating overachiever. She’s the un-Beyoncé, a funhouse-mirror Max Martin.

While there’s no such thing as a prototypical arc for a successful pop career (think of Katy Perry launching herself as a Christian singer, or Bruno Mars cutting his teeth as an Elvis impersonator), Sia Furler’s career has been even more circuitous than most. Starting in a mid-’90s acid jazz band in her native Adelaide, Furler moved to London and wound up an in-demand vocalist, first as backup for funk-popsters Jamiroquai and, most prominently, with the down-tempo electro-pop outfit Zero 7. Sia sang on the first three Zero 7 albums and took the lead vocal on their first and only U.K. Top 40 hit, the now-classic 2001 chillout single “Destiny”—a showcase for her potent, braying voice and charmingly odd, marble-mouthed phrasing. As a solo act, Sia scored one fluke U.K. Top 10 hit, the appropriately named “Taken for Granted,” but she spent most of the 2000s in the lower reaches of the British charts.

In America, Sia’s profile was more indie-quirky, in a manner common to the mid-’00s, with her albums stocked by Starbucks and her biggest exposure via the tube—her sullen, piano-laden single “Breathe Me” wound up in the 2005 finale of HBO’s Six Feet Under. It’s easy to picture Furler’s career at this point winding up a succès d’estime, with a profile à la Imogen Heap or any of the other acts on the Garden State soundtrack. In interviews, Sia herself calls the ’90s and ’00s her “indie” period, where pop success was either unfathomable or untrustworthy. But the ’10s is when things got interesting—and, to Sia, scary—as she stumbled into both stardom and Svengali-dom.

In 2010, Furler tried her hand at pure-pop songwriting for the first time on Christina Aguilera’s album Bionic; and as an artist, she issued her poppiest album to date, We Are Born, which sold well globally and generated modest hits across Australia and Europe. (“Clap Your Hands” even made the U.S. dance charts.) But Sia’s first taste of fame overwhelmed her, leading her into a near-suicidal, drug-and-alcohol–fueled depression and a decision, by 2011, to focus on songwriting. Oddly, that’s when she scored her first major hit as a singer: David Guetta’s “Titanium,” a song Furler wrote as a demo but that the hitmaking French DJ decided to release with her vocal intact. With soaring lyrics (“I’m bulletproof, nothing to lose/ Fire away, fire away”) adopted by the anti-bullying and It Gets Better movements, “Titanium” was a worldwide Top 10 smash, reaching No. 7 on our Hot 100. It quickly led to another Sia-fronted (and penned) hit, Flo Rida’s “Wild Ones” (No. 5, 2012). By the end of 2012, Furler had scored her first No. 1 hit as a songwriter, with Rihanna’s “Diamonds.”

This is what has made Sia the pop star both counterintuitive and compelling: The less she professes to want fame, the more it’s drawn toward her. Having proven herself a pop powerhouse, Sia decided to embrace stardom in her own eccentric idiom. She rolled out the face-shielding platinum wigs and video doppelgängers in 2014, with her chart-topping album 1000 Forms of Fear, which spawned Sia’s first Top 10 hit as a lead artist, the soul-baring “Chandelier.” (Coming just a few years after Furler’s personal breakdown, both the album’s title and the single’s lyrics about a desperate, tear-streaked bender cut close to the bone.) Whether casting Shia LaBeouf in a creepy video or showing up on Ellen’s couch for a fully wigged interview, Sia evinced a wry, almost cynical relationship with her own unlikely stardom.

That unlikelihood continues with “Cheap Thrills” topping the Hot 100. The song was first issued as a single last winter and took 23 weeks to ring the bell—according to Billboard, the slowest climb for a No. 1 by a woman since Patti Austin and James Ingram’s 1983 slow-burn duet “Baby, Come to Me.” The 40-year-old Sia is also the oldest woman to score a No. 1 hit since 42-year-old Madonna in 2000 with “Music.” (Since this is Sia’s first chart-topper as an artist, “Cheap Thrills” makes her the oldest female artist to score a debut No. 1 hit since 43-year-old Bette Midler in 1989.)

But the richest irony of the Sia song’s chart-conquering success is the premise of the album it comes from. This Is Acting, released back in January, is composed entirely of tracks Furler originally wrote for other pop stars which they all rejected. In a remarkably frank interview with Rolling Stone’s Brittany Spanos just before the album’s release, Furler discussed the spiky premise of the album and revealed the provenance of many of the songs. Acting’s lead single, last fall’s minor hit “Alive,” was written with, and for, Adele, intended for her blockbuster 25 and ultimately left off. “Reaper” was co-written in a loose collaboration with Kanye West and destined for Rihanna’s then-gestating album Anti album but didn’t make the cut. “Bird Set Free” was nixed by, again, Adele (who actually recorded it before setting it free) and, again, Rihanna.

And “Cheap Thrills”? Another Rihanna reject—and now a No. 1 hit. Not that the woman born Robyn Fenty is hurting for hits this year: Rihanna’s Anti has already given rise to the chart-topping megasmash “Work” and the Top 10 follow-up “Needed Me.” (On the other hand, if Rihanna had kept “Cheap Thrills,” she’d have moved another No. 1 hit closer to the all-time Hot 100 record.) As if affirming the single was Rihanna’s to lose, Sia sings “Cheap Thrills” in an exceedingly Rih-like cadence. The song’s syncopated pre-chorus, “’Til I hit the dance floor, hit the dance floor/ I got all I need,” has that combination of island lilt and pop bounce that Fenty has patented over the last decade, and Furler delivers it like a master impressionist.

We may not even be done this summer with Rihanna-flavored, chart-topping hits that don’t sound like the person singing them. At this writing, the song most likely to eject “Cheap Thrills” from its perch atop the Hot 100 in the next week or two is the Calvin Harris single “This Is What You Came For” (currently ranked No. 3). The Harris song’s vocalist is Rihanna—her second major collaboration with the Scottish DJ after their 2010 blockbuster “We Found Love.” But in a delicious irony, it was revealed less than a month ago, in the middle of the song’s chart run, that the co-writer of the song is Harris’ ex-girlfriend Taylor Swift, under the faux-Scandinavian pseudonym Nils Sjöberg. Accordingly, on “Came For,” Rihanna’s sliced-and-diced voice sounds less like her own and more like Swift’s.

Which basically means that, in this summer’s pop sweepstakes, the artist who best channeled island-pop avatar Rihanna was not the 28-year-old Barbadian star herself, but Aussie quadragenarian Sia Furler. If you can find little else to enjoy about 2016’s downbeat, slow-tempo’d pop-chart sweepstakes, every time you hear “Cheap Thrills” thumping from someone’s car or earbuds during the dog days, picture Sia not only pulling a No. 1 hit from the fire but beating a much younger star at her own game. It’s essentially All About Eve in reverse. Cheap or not, that’s definitely a thrill.