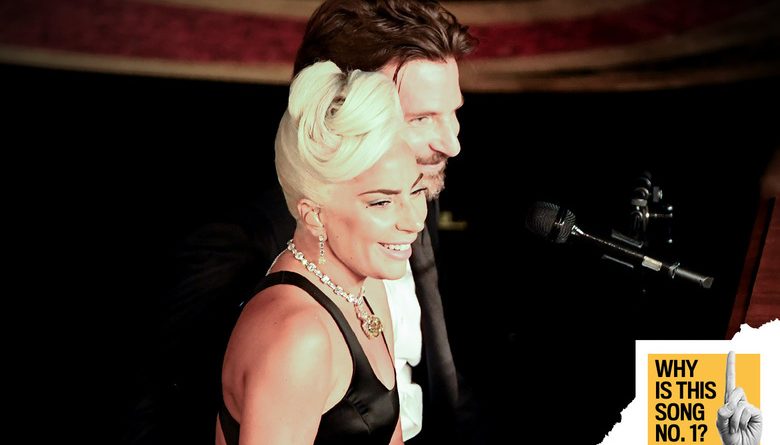 Lady Gaga and Bradley Cooper’s journey to the top of the charts is virtually unprecedented.

Years from now, when pop critics and cultural historians write about the phenomenon that was Lady Gaga and Bradley Cooper’s “Shallow,” it will be tagged as a Billboard chart-topper, but I’d wager that few, if any, of these stories will note how utterly bizarre it was that this country-rock duet topped the charts in March 2019, nine months after the song was introduced to the world in the A Star Is Born trailer and became arguably 2018’s biggest musical meme.

Put another way: How the hell am I still writing about “Shallow” now? Aren’t we sick of this song … this movie … this glory-note-delivering vehicle yet? If I may paraphrase the name of this Slate series: Why is this song only now, finally, No. 1? The short answer is exactly what you think it is: It’s the Oscars, stupid. But that undersells how rare this is—in some ways, virtually unprecedented. We now have the data to prove it.

About that data: “Shallow” leaps from No. 21 to No. 1 in this, its 22nd week on the Hot 100. That’s the same number of weeks Lady Gaga’s first chart-topper, “Just Dance,” took to reach No. 1 back in January 2009, and since then the only No. 1s to take longer were slow-growing hits by John Legend and Sia. It’s also Gaga’s first No. 1 in eight years, since her self-empowerment pro-queer anthem “Born This Way.” Unlike “Just Dance” which, as Gaga’s breakthrough hit, had a more traditional slow-growth trajectory, “Shallow” has bounced around the chart ever since it debuted last fall. In fact, this is its highest position since it vaulted from No. 28 to No. 5 in its second week on the chart in October.

In both instances, Hollywood had more to do with this song’s chart swell than radio did. Its original peak in October coincided with the movie’s blockbuster opening in North American cinemas, the same day the A Star Is Born soundtrack went on sale. During that week last fall, Billboard reported that streaming and radio airplay were just OK—a 34th-place ranking in streams, a radio audience of 5.1 million, only good enough to crack the magazine’s Adult Pop Songs airplay chart, not the all-genre Radio Songs chart that feeds the Hot 100. It was understandable that airplay would be limited for such an old-school ballad at a time when radio programmers are taking their cue from streaming services and programming the sort of moody trap that dominates Spotify. In the song’s opening weeks, only download sales—an aging metric now favored mostly by older fans—were relatively strong; “Shallow” was the top dollar-download in America for more than a month last fall.

The data contrast for “Shallow” between that week in October and this most recent chart week is illustrative—Billboard reports that the knock-on effect of the Oscars vaulted “Shallow” to new heights in all three metrics that fuel the Hot 100. Its digital sales are even stronger than they were last fall: 115,000 buck-a-songs, the first week any song has sold more than 100K downloads since the height of Drake’s “In My Feelings“ last summer. That’s the kind of number we used to see in the heyday of the dollar-download, a technology that was very good to Gaga and her fellow Queens of Pop a decade ago. On the radio, too, “Shallow” is getting more airplay than ever, with the song now ranking 27th in radio audience. Finally, streaming, a metric in which adult-leaning pop stars are routinely disadvantaged: “Shallow” cracked the top 10 among streaming songs for the first time, with more than 27 million streams last week and a ninth-place ranking on a list routinely dominated by the likes of J. Cole and Post Malone.

Is Lady Gaga suddenly a titan of Spotify? Hardly—she and Bradley Cooper got a big boost from all those times you hit the YouTube replay button on their Oscars duet. (Hey, I am not immune—I maybe, sometimes, dial up the clip just to watch the stage crew push that piano onstage while Cooper and Gaga make their unannounced walk up from the audience … best Oscar performance intro ever, man.) All those views of the Oscars clip counted toward Billboard’s charts, too. The magazine doesn’t reveal exactly how big a factor video was, but it’s not hard to extrapolate: Among YouTube Music titles, “Shallow” makes the top five for the first time this week.

None of this should come as a surprise after a week in which the pop-cultural news cycle was dominated by frame-by-frame analysis (sometimes literally) of Gaga and Cooper’s duet. Heck, it shouldn’t really be big news if you know Lady Gaga, period: Her entire career as a pop star, all of which postdates the 2005 launch of YouTube, has been fueled by the visual. But the fact that it took a buzzy video to bring Gaga back to No. 1 on America’s flagship chart isn’t the only way this chart triumph is a homecoming. In January, when I devoted an entire Hit Parade episode to the career of Lady Gaga, I remarked how the story beats of A Star Is Born reflected the story of Stefani Germanotta herself: from her elevation of cerebral dance-pop to her search for “authenticity“ to her putting in the work in her quest for fame. The belated arrival of “Shallow” at No. 1 completes Gaga’s comeback and that meta-narrative.

Gaga’s return to No. 1 after eight years is the longest gap this decade after Beyoncé.

Multiple Gaga story beats were already baked into the song itself—”Shallow” may not sound like any prior Gaga chart-topper, but it actually reboots many elements of her oeuvre. The Americana-rock flavor of the song, co-written with superproducer Mark Ronson and producer-songwriters Anthony Rossomando and Andrew Wyatt, was a continuation of Gaga’s country-inflected work with Ronson on her 2016 album Joanne. The deep-toned piano balladry has precedents in a range of Gaga concert staples, from The Fame Monster‘s “Speechless“ to Artpop‘s “Dope“ to Joanne’s “Million Reasons.” Even that howling, wordless glory note you karaoke fans love so much—that’s an old Gaga trope. In a Los Angeles Times interview during the song’s Grammy and Oscar hunt, Ronson revealed that he had encouraged Gaga to vocalize wordlessly as she had on hits like “Poker Face“ (which gave us the five-syllable “Pa-pa-pa-poker”) and “Bad Romance“ (the immortal “Rah rah ah-ah-ah”).

Billboard points out that Gaga’s return to No. 1 after eight years is the longest gap this decade after Beyoncé, who took nine years between 2008’s “Single Ladies (Put a Ring on It)“ and her duet role on Ed Sheeran’s 2017 smash “Perfect.” Like Queen Bey—who during the 2010s has become more of a critically acclaimed album-statement-maker than pop hit–generator, and rode the coattails of late-2010s chart dominator Sheeran back to No. 1—Gaga, too, needed an X-factor to bring her back to the summit after that long gap. Starring in Bradley Cooper’s movie was big, but not quite enough, as we saw in October. And obviously, as a singer, he is no Ed Sheeran—Cooper is riding Gaga’s coattails musically, not the other way around. It’s also safe to say just winning the award wouldn’t have been enough, either. If Gaga had won Best Original Song the first time she was heavily favored for the prize, for 2015’s “Til It Happens to You,” the song probably wouldn’t have turned into so much as a Top 10 hit, let alone a No. 1.

The data supports this. Five years ago, during the awards season of 2014, I did an analysis for Pitchfork about the impact of a Best Original Song Oscar on a song’s chart trajectory and found that the little gold man has little effect. Over a half-century of Oscars, fewer than 10 percent of all winners could be said to have gotten a boost from taking the statue. And Best Song winners that become No. 1 hits? They’re even rarer. Over the 60 years the Hot 100 has existed, there were, prior to last month, only 16 Hot 100 No. 1 hits among the Best Song winners—from “Raindrops Keep Fallin’ on My Head“ through “Lose Yourself.” We almost had another in 2014, when two big hits—Idina Menzel’s “Let It Go“ and Pharrell’s “Happy“—were in the hunt, and one did go to No. 1 after the telecast—but it was “Happy,” the Oscar runner-up, while the prizewinner, “Let It Go,” peaked at No. 5.

“Shallow” is only the second Best Song winner to hit No. 1 after winning the statue.

In fact, only one song in Oscars-and–Hot 100 history reached No. 1 after winning the statue: Maureen McGovern’s “The Morning After,” from 1972’s The Poseidon Adventure, a 1973 chart-topper. In his Billboard Book of Number One Hits, chart analyst Fred Bronson does attest to the Oscars’ role in McGovern’s success, “[O]nly after the extra attention the song garnered from winning an Academy Award [did] it become a hit.”

This makes Gaga and Cooper’s “Shallow” only the second Best Song winner to hit No. 1 after winning the statue. But even within this club of two, there’s a difference: McGovern’s “The Morning After” crept to No. 1 in August 1973, more than four months after that year’s Oscar telecast. Of course, in 1973, the charts were slower, nothing was digital, and there was no MTV, let alone YouTube. Still, Bronson’s book and Oscars history attest to no exceptional performance by McGovern, nor any promotional magic arising from her Academy Awards win: The song didn’t so much as debut on the Hot 100 until June 1973, three months after the Oscars. All of which really does make “Shallow” exceptional: the first hit that finally went to No. 1 directly because of its Oscars exposure.

All this number-crunching only takes us so far, of course: “Shallow” also went to No. 1 because it is “Shallow.” It is sturdily written, memorable, meme-able, karaoke-friendly, and triumphant, sung not only by the woman who primarily wrote it but who also plays a version of herself singing it in a movie that has made hundreds of millions and counting. Like “Up Where We Belong“ or “(I’ve Had) The Time of My Life,” it’s a cinematic, swoon-inducing duet. Like Johnny Cash’s cover of “Hurt“—only much less sad, because Lady Gaga is all of 32—it is a twangy pop meta-song summarizing the arc of a beloved musical career while simultaneously providing a boost to that career. And it won an Oscar in the most memorable way possible. Any song with that many factors in its favor—even if it sounds like nothing else on the radio—would stand a strong chance of topping the charts … eventually. Ally Maine may become an overnight success in A Star Is Born, but Lady Gaga knows that no success really happens overnight. This is hard work.