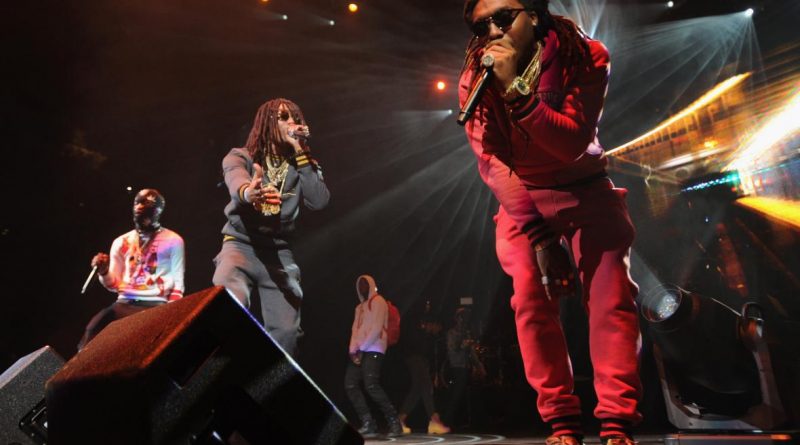 For most hit songs, the catchiest bit, the part that takes up residence in your frontal cortex and won’t let go, is the chorus. But there exists a special species of smash whose stickiest bit is right at the start—some lyrical doggerel that leads off the track and somehow eclipses the refrain. Indeed, it might as well be the refrain—it’s so quotable, so infectious, it defines the song. I would scarcely need to remind you of the source of most of these lyrics, all of which are opening lines to Billboard Hot 100 No. 1 hits since the ’70s:

“Jeremiah was a bullfrog.”
“Some people call me the space cowboy.”
“Memories light the corners of my mind.”
“We don’t need no education.”
“I believe that children are our future.”
“Aruba, Jamaica, ooh, I wanna take ya.”
“It’s been seven hours and 15 days.”
“I like big butts, and I cannot lie.”
“You say, I only hear what I want to.”
“Goodbye, Norma Jeane [England’s rose].”
“Go, shawty—it’s your birthday.”
“To the left, to the left—everything you own in a box to the left.”
“Apple Bottom jeans, boots with the fur.”
“First things first, I’m the realest.”

To the above list, let’s now add the pithy line “Raindrops—drop top.” That koanlike lyric is the opener to “Bad and Boujee” by Migos, the latest No. 1 on Billboard’s flagship chart. Like many of the chart-toppers above, from “The Joker” to “In Da Club,” the chorus of “B&B”—“My bitch is bad and boujee” (boujee being an intentionally un-bourgeois spelling of bourgie)—is itself fiendishly catchy. That chorus is also weirdly well-timed, just days before our country’s most über-boujee president-elect ever stands for the oath of office. (The song’s witty spoken-word lead-in even sounds like an inadvertant rip on Trump: “You know, so, we ain’t really never had no old money—we got a whole lotta new money, though. Heh.”) But the “Raindrops—drop top” line is just so irresistibly percussive, it has taken the internet by storm (sorry), showing up in scores of homemade videos, joke tweets, social media threads, and other ephemera.

Migos are a Lawrenceville, Georgia–bred trio; on a recent episode of Donald Glover’s TV series Atlanta they called themselves “the ’Migos,” and Glover included the “the” when thanking the group during an acceptance speech for his show at last week’s Golden Globes. The three ’Migos are all related: Quavo, born Quavious Marshall; his nephew Takeoff, born Kirshnik Ball; and his cousin Offset, born Kiari Cephus. Produced by Atlanta-based hitmaker Metro Boomin, “Bad and Boujee” lands at No. 1 directly on the heels of Rae Sremmurd’s smash “Black Beatles,” making it the second straight ATL-based hip-hop track to ride the back of a meme to No. 1. Add to these two surprise, meme-driven hits last spring’s chart-topper “Panda” by Brooklyn rapper Desiigner, and we have the makings of a serious pop trend: superviral rap, riding sudden bursts of sociability and streaming to the top of the charts. (Housekeeping note: While this Slate series was on hiatus over the holidays, the “Black Beatles” run at No. 1 was briefly interrupted, during the slow week just after Christmas, by the Weeknd’s “Starboy” featuring Daft Punk. Your humble chart-watcher regrets the missed hit.)

Fortified by a loopy guest verse from Philly rapper Lil Uzi Vert, “Bad and Boujee” is Migos’ biggest pop hit by far. Prior to this, the crew had never gotten further on the Hot 100 than No. 69, with their 2014 single “Fight Night.” (Even on Billboard’s R&B/Hip-Hop Airplay list, Migos have mostly landed outside the top 10; “Fight Night” managed No. 6.) The trio honed their mantralike style early, leading off in 2013 with the widely acclaimed single “Versace” (No. 99 pop, No. 15 R&B/HH Airplay), a three-minute track on which Quavo says the titular fashion designer’s name more than 100 times. “Bad and Boujee” dials back Migos’ penchant for repetition a tad, but Metro Boomin’s track is still hypnotic, punctuated by a dark piano toll and a recurring trap synth line. The single dropped in October and kicked around for a few weeks before the holiday season, when the song’s opening line began infecting rap fans across the country—and around the world:

my first time DJing for Migos. this what happened when I played Bad & Boujee in Lagos, Nigeria. pic.twitter.com/AJPP99m8aJ

Unlike “Black Beatles”—which spent seven weeks on top of the Hot 100 fueled by the Mannequin Challenge, a meme not actually related to the content of Rae Sremmurd’s song—“Bad and Boujee” has, in effect, become its own meme. In the context of the song, “Raindrops—drop top” is meant to set a scene: a crew parked in a sleek convertible, putting up the roof to keep out the rain and hotbox the car. But on social media over the holidays, it’s become an all-purpose pick-me-up—just hearing that opening piano “DONNGGGG!” and Offset’s “You know …” provides guaranteed mirth in virtually any incongruous context.

Not all of this social-media LOLzing counts for the Hot 100—just the versions of the meme that use the original recording and wind up on YouTube. But Billboard reports plenty of those: “B&B” racked up 19.3 million YouTube streams during the chart’s tracking week, and that was before Donald Glover called it “like … the best song ever” at the Globes. (Any fallout from Glover’s shoutout—including his other pronouncements about the song’s party-starting and amorous qualities—won’t have any chart impact until the next Hot 100.) Unsurprisingly on a hit like this, the streaming-and-memeing public is out way ahead of the music-biz gatekeepers—in the week it topped the big chart, “B&B’s” radio audience was a modest 20 million, and it hasn’t even made Billboard’s Radio Songs chart yet. (Of course, “Black Beatles” and “Panda” also both started almost exclusively as streaming hits before eventually becoming top 10 airplay hits.) “B&B” also isn’t a terribly huge seller—it has yet to top the Digital Songs chart, and even in its triumphant week on the Hot 100, the song’s digital downloads are only 76,000, one of the lowest weekly sales totals for a No. 1 hit in the digital era.

We should probably get used to this pattern. With the occasional exception, streaming is going to drive most No. 1 hits from here on out. That’s good news for hip-hop fans, as I predicted a half-decade ago and re-emphasized in last month’s Slate Music Club. At the height of 2010s club-pop, it was not only hard to picture what would reassert black music’s position on the pop charts but also difficult to imagine that mordant street-driven trap hits would come to dominate. Go ahead and play “Panda,” “Black Beatles,” and “Bad and Boujee” back to back—that’s a lot of minor-key synth stabs and twisty wordplay. As rap No. 1s go, these aren’t exactly party tracks like “Whistle” or rap-lite hybrids like “See You Again.” Interestingly, Billboard claims the back-to-back success of “Beatles” and “Boujee” represents the first successive rap No. 1’s since a pair of T.I. tracks from the fall of 2008, “Whatever You Like” and “Live Your Life”—but even those smashes by an Atlanta superstar had more pop crossover baked into them than “Beatles” and “Boujee” do. (As a chart phenomenon, I’d say the Sremmurd–Migos chart pairing is closer to 2006’s successive No. 1’s “Laffy Taffy” and “Grillz,” or 2004’s “Slow Motion” and “Lean Back.”)

The formula that brought street rap back to the top of the pops is simple: Hip-hop dominates streaming, and streaming now dominates the music business. It’s a handy reminder that often, technological shifts are what change the shape of our art. On the other hand, what all of these recent trap smashes have in common is that they’re striver’s anthems, part of a long tradition in hip-hop. “Panda” was about coveting a fancy ride; “Black Beatles” is about wishing for cross-cultural stardom. As for “Bad and Boujee,” as easy as it is to focus on its opening line, the rest of the song, an ode to dating a higher class of acquisitive yuppie, is about rising to a higher socioeconomic status: “We came from nothin’ to somethin’, n—a.” These aspirations to the good life seem to be bearing fruit for Migos: In addition to their chart-topping hit they, like Desiigner, recently signed with G.O.O.D. Music, the label-cum–management company run by Kanye West, a man who places a premium on acquisitive striving.

Whatever high-tech happenstance brought about rap’s pendulum swing back to the top of the pops, we appear to have arrived at an emerging pop theme that’s equal parts decadence and yearning. Which makes a kind of sense as we plunge into a new American era. As we begin to debate how art will respond to the impending crisis that is President Trump, our hit parade is already on the move. Later this week, Inauguration Day may lack for name-brand music—deservedly—but whether there are raindrops or bright sun in Washington, you can guess what the soundtrack to that day’s tweet-stream will be.