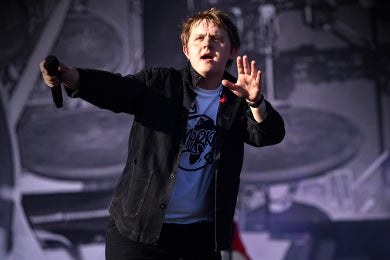 Memo to Adele: You … are recording a new album, right? It’s been about four years now. Surely you’re cooking something up for before Christmas? You might wanna get on that, because, just FYI, the whole world is apparently jonesing hard for some piano-based melodrama sung by a heartbroken torch singer with a wicked sense of humor.

In that last sentence, I am describing not only the famously hilarious, foulmouthed Ms. Adkins, but also a logorrheic Scotsman named Lewis Capaldi. A charming media profile never hurts in the age of social media, and like Adele, Capaldi presents an improbable combination of heart-rending music and expletive-laden stemwinders. And speaking of improbable, this week, the unassuming, dough-faced, and bed-headed Capaldi completes a yearlong conquest of the world’s charts with his ardent, voice-cracking ballad “Someone You Loved.” Since it arrived late last year, “Someone” has reached the top spot in not only Capaldi’s native Scotland and the United Kingdom but everywhere from Malaysia to the Czech Republic. In all, “Someone” has reached the top five or top 10 in more than 20 countries—including, finally, America: “Someone” tops the Billboard Hot 100 after a 24-week chart run, the slowest rise to the U.S. top spot in more than five years.

In the U.K., the 23-year-old Capaldi’s chart conquest is fairly easy to explain. The nation that gave us Adele, James Blunt, and Ed Sheeran—and an army of X-Factor winners who have topped the British charts every Christmas with inspirational goo—has a well-chronicled soft spot for aching balladry. Moreover, as noted above, Capaldi has spent the past year-plus charming the knickers off the British media with his filter-free persona and Trainspotting-worthy accent, making himself into a social media star in the process. And then, on the glossier end of the promotional spectrum, the original music video for “Someone You Loved” didn’t hurt with the U.K. populace, either, as it starred Doctor Who veteran Peter Capaldi—who, yes, is a distant cousin of Lewis Capaldi’s, in case the younger gentleman’s last name looked familiar to you devoted Whovians.

But devoted Whovians are thinner on the ground in America than they are in Britain, and Lewis Capaldi’s social profile is not exceptional here compared with, say, Lizzo’s or Cardi B’s. (Although, bonus points to Capaldi this week for renaming his Twitter username “America’s Sweetheart” and tweeting a hilarious photo of himself with stars-and-stripes makeup.) As for Capaldi’s song itself, as I have chronicled in this Slate No. 1 hits series over the past half-decade, the ’10s has not exactly been a boom decade for traditional balladry on the U.S. charts—though, to be fair, depending on how you define the genus “ballad,” 2019 has been a relatively strong year for the category. Halsey got herself to the top of the Hot 100 in January with the wounded “Without Me” and quickly followed that up with a Top 10 collaboration with Benny Blanco, the wistful “Eastside.” The week after the 2019 Academy Awards, newly minted Oscar-winner Lady Gaga and her director Bradley Cooper flew to No. 1 with “Shallow.” And I’m not sure how you classify Shawn Mendes and Camila Cabello’s chart-topping late-summer genre hybrid “Señorita,” but it’s at least half a semi-acoustic Latin ballad, albeit a rather peppy one.

SOMEONE YOU LOVED IS THE NUMBER ONE SONG IN THE USA!!!😭
— America’s Sweetheart (@LewisCapaldi)
October 28, 2019

In any case, Lewis Capaldi’s “Someone You Loved” had none of these hit American ballads’ X‑factors working in its favor: not Halsey’s rap-derived singing flow, Mendes’ and Cabello’s massive U.S. teen fan bases, or Gaga’s Oscars performance. It’s an emotive, raspy power-belter less in the mode of “Shallow” and more in the stark, drumless mode of Adele’s twin No. 1s “Someone Like You” and “Hello.” Except Capaldi isn’t as deep into his career as Adele was when she started regularly topping the charts in 2011. Though “Someone You Loved” is not Capaldi’s very first release—in Britain, he hit No. 6 in 2017 with his debut single, the even starker “Bruises”—“Someone” is his first chart hit in America and in most of the countries where it became a smash.

So Capaldi essentially scored a global No. 1 hit from a standing start in 2019. How’d he pull that off? I can’t speak for the song’s success in Denmark, Italy, or Singapore. But in America, at least, Capaldi is very much a product of his time: a 2010s balladeer who constructs his weepers around as few sonic distractions as possible.

Before addressing the “How?” question at the song level, I have to break down Capaldi’s chart success at the raw data level. Billboard reports that “Someone You Loved” is the third of the past five Hot 100 No. 1s to top the chart without ranking first in any of the big chart’s metrics of streaming, airplay, or sales. Like Billie Eilish’s August chart-topper, “Bad Guy,” and Mendes and Cabello’s aforementioned “Señorita,” Capaldi’s hit got to the top by combining strong but not commanding showings in all three metrics. Among radio songs, “Someone” ranks second for the week, its airplay audience falling just shy of the song it replaces at No. 1 on the Hot 100, Lizzo’s seven-week smash “Truth Hurts.” The song also ranks second in digital sales, although it does so with a surge in download sales of 41 percent, fueled by a viral late-October dance performance to a cover of the song on the TV juggernaut Dancing With the Stars. Finally, and perhaps most notably, the song reaches the streaming songs top 10 for the first time—it ranks eighth at Spotify and other music services this week, probably also the result of the Dancing showcase. That eighth-place streaming ranking might not sound impressive, but it’s remarkable for a white-bread ballad in a format typically dominated by hip-hop and other urban-leaning formats, and it probably gave “Someone” the last bit of juice it needed to go all the way.

Capaldi needed every bit of that boost, because “Someone” has been the slow-burn hit of 2019—again, 24 weeks to the top, nearly half the year. That’s even slower than how long Gaga’s “Shallow” (22 weeks) or Eilish’s “Bad Guy” (20 weeks) took to reach No. 1. The thing is, those other two slow-growers have unusual backstories for their poky chart climbs: Gaga only made it there when heavy streaming of her Oscars showcase with Cooper gave her hit its fluke leap to the top. And Eilish’s sly hit was one of the songs stuck at No. 2 all summer behind Lil Nas X’s record-breaking “Old Town Road” before getting its very belated week on top.

Capaldi’s Hot 100 rise is a different animal altogether: an old-fashioned, steady, few-rungs-at-a-time climb, with no unusual catalysts (at least until Dancing With the Stars) or roadblocks. After debuting at an unspectacular No. 85 in late May, “Someone You Loved” quietly cracked the Top 40 in mid-July, then took another two months to sneak into the Top 10. Only in the past few weeks of its run did “Someone” look like a potential No. 1 hit—and even then, it knocked around the Top Five for more than a month before making its final bunny hop to the top. Basically, Capaldi’s song gradually wormed its way into America’s consciousness—becoming omnipresent, relatively inoffensive, musical wallpaper. Not for nothing have I heard this song most at my local drugstore and supermarket over the past two months.

But then, that’s often how love ballads insinuate themselves into our lives, especially this century. Since the start of the 2000s, the slowest-rising No. 1 hits have generally been ballads. In fact, according to Billboard, in the 61-year history of the Hot 100, the five lengthiest climbs to No. 1 (in a single chart run) have all come since 2000, and four of the five have been torch songs: Lonestar’s country slow dance “Amazed” (31 weeks), John Legend’s soul ballad “All of Me” (30 weeks), Creed’s growly fatherhood homage “With Arms Wide Open” (27 weeks) and, now in fifth place, Capaldi’s 24-week riser to No. 1, “Someone You Loved.” (The one outlier in this lugubrious top five, Vertical Horizon’s “Everything You Want,” is not a ballad per se, but it is a midtempo, ruminative alt-pop song about heartbreak. So, only a slightly different flavor.)

A modern, hit-bound ballad has to cut through the thicket of clattery trap music and maximalist pop that normally leads the 2010s hit parade, and throughout this decade, the secret to scoring a hit with a ballad has been removing as many normal pop-song elements as possible—losing the percussion and reducing the song to an ascetic, preferably piano-based sonic template à la Adele’s “Someone Like You.” Five years ago, in my piece for this Slate series when Legend’s “All of Me” rose to No. 1, I called this approach the “New Stark.” It’s not so new anymore, but for Lewis Capaldi a half-decade later, it’s still working.

Capaldi reportedly labored for months over the melody—the song’s sturdiest element, even if it is a bit close to Pachelbel’s unkillable “Canon in D”—before turning the track over to the U.K. producer-writer trio TMS and British singer-songwriter Sam “Rømans” Roman for help finishing it in the studio. Together, the fivesome made the song bulletproof by reducing it to its essence: just a piano and a reverb-heavy mic to capture Capaldi’s warbly, affectingly straining vocal—a cross between British singers George Ezra and Harry Styles, topped by an Adelesque voice-cracking ache. Plus there’s the lyrics—relatability may be a rightfully dreaded word when it comes to both art and politics, but it really does work for hit balladry. Capaldi himself admitted that, when he penned “Someone You Loved,” he was purposefully trying to write a tabula rasa. “There were a lot of people coming up to me at my shows and saying that they were able to identify with my songs,” he told British music magazine NME. “And I thought, ‘What if I was just trying to not write something that was insular for once, and just tried to be a bit broader?’ ” It was an effective, knowingly crass tactic—like Legend’s “All of Me,” the premier mid-’10s stark ballad, “Someone You Loved” invites the listener to project herself into it.

But unlike Legend’s devotional hit, “Someone” is a breakup anthem, which puts it more in line with the two “Someone/“Somebody” megasmashes of the early ’10s: Adele’s aforementioned 2011 topper “Someone Like You,” and Gotye’s even more unlikely 2012 megahit, the xylophone-and-flute-flecked ballad “Somebody That I Used to Know.” Lyrically, Capaldi’s song is essentially a reboot of Gotye’s wounded, recriminating song of romantic regret—Gotye’s “But you didn’t have to cut me off” becomes Capaldi’s “And then you pulled the rug”—set against the piano-based production of Adele’s influential New Stark template. All of these songs are blank slates, fully available to both those nursing a broken heart and those standing in the 10-items-or-fewer line.

So, you be the judge: Lewis Capaldi is No. 1, either because he’s boldly breaking with the predominant strains of current hit music or because he’s filling a market gap Adele and John Legend left wide open. I find stark ballads tend to come in small waves: Adele and Gotye followed each other closely in the early ’10s, and in the mid-’10s, Rihanna’s “Stay” and Bruno Mars’ “When I Was Your Man” came less than a year before Legend’s “All of Me.” Maybe we’re in the middle of another wavelet. Interestingly, the reason Capaldi’s “Someone You Loved” isn’t the top-selling digital download (despite his Dancing-fueled sales bonanza) is because another heartbreak ballad outsold it last week: “Lose You to Love Me,” the comeback single from Selena Gomez. Her new single—piano-based, nearly percussion-free, and laced with romantic regret—debuts at No. 15 this week based on only two days of sales and streams, an unusually strong chart performance for her. Though she’s only 27, Gomez is a chart veteran who, in a dozen years of hitmaking, has yet to have a No. 1 hit. If she somehow finds herself threatening the top of the Hot 100 in the next week or two, perhaps she’ll consider sending Lewis Capaldi a thank-you bouquet.