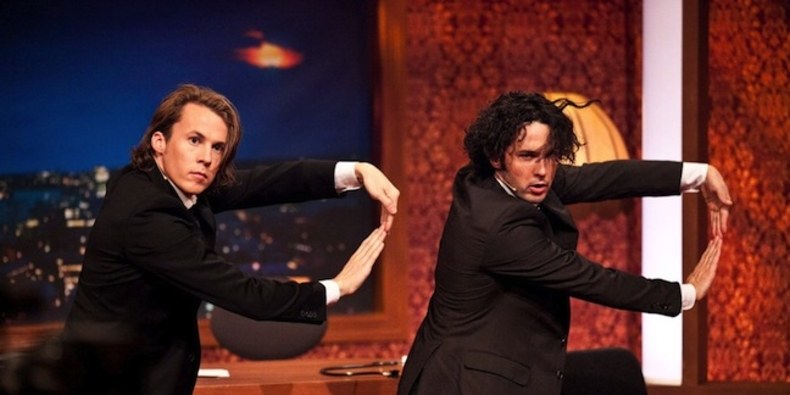 The most interesting song on Billboard‘s Hot 100 right now is one that, in some ways, should have never even been on the chart in the first place. Ylvis’s “The Fox (What Does the Fox Say?)”, this week’s No. 6, was quite literally recorded as a joke. Brotherly comedy duo Bard and Vegard Ylvisaker conceived of the EDM parody as a promotion for the new season of their Norwegian TV talk show I Kveld Med Ylvis (“Tonight With Ylvis”). Not unlike Jimmy Kimmel using a “quality” singer like Josh Groban for a musical sketch, the Ylvisaker brothers thought it’d be hilarious to employ their homeland’s most successful global hitmakers, producer/writer duo Stargate (Rihanna, Ne-Yo, Beyoncé), so they could juxtapose their absurd musings on the noises of the woods’ slyest animal with Top 40 radio-caliber beats.

More than 130 million global video views later, the gobsmacked Ylvisakers found they had succeeded all too well—the record was an actual hit, and nowhere bigger than in America, where it had become something of a social media sensation.

An oddly catchy, dance-driven novelty pop song, created by non-Americans, that breaks via viral video at the end of the summer and winds up scaling the Hot 100 in the early fall, much to the surprise of the song’s creators—where have we heard that before?

The answer, of course, is Psy’s 2012 K-Pop megasmash “Gangnam Style”, still the most-watched video in YouTube history at 1.8 billion views and climbing. (Go on, add one more to its tally.) For the second year in a row, America is being infiltrated by a bit of foreign whimsy—almost to the week: “Gangnam Style” reached No. 2 on the Hot 100 in early October 2012 and stayed there for seven weeks.

Still, the comparison is a bit reductive, and not just because it demands a wide and somewhat xenophobic definition of the word “novelty”: “The Fox” was fully intended by the Ylvisakers as a joke, while Psy’s trifle was actually a sly satire of Korean materialism. There’s also the fact that Psy sang in Korean, while the Ylvisakers sing in English—which, in theory, should make crossover easier for Ylvis.

For chart-watchers, though, the big difference between one year ago and now is that Billboard made a massive change on the Hot 100 in the intervening time: the addition, in February, of YouTube views to the chart formula.

Psy had to scale the Hot 100 last year with one hand tied behind his back; all those tens of millions of views of “Gangnam Style” didn’t count in Billboard and only helped him insofar as they inspired a few million iTunes sales, which did count. Mind you, those digital sales weren’t nothing; for more than a month, Psy had the best-selling song in America.

Psy’s loss seems to be Ylvis’s gain, and when “The Fox” debuted on the Hot 100 a month ago, streaming (a combination of YouTube and Spotify) was overwhelmingly responsible. “The Fox” debuted in mid-September on Billboard’s Streaming Songs chart—one of the main components of the Hot 100—all the way up at No. 3. It has never left the Top Three on that chart, which explains how “The Fox” has scaled the Hot 100. As with “Gangnam” a year ago, many who see the video are inspired to hit iTunes, and so “The Fox” is also doing well on Digital Songs—another of Billboard’s Hot 100 components.

So if “The Fox” is selling well and streaming like crazy, why is Ylvis stuck at No. 6? Shouldn’t they be on their way to surpassing Psy and hitting No. 1 by now?

There’s a third component to the Hot 100 that I haven’t mentioned yet, and that’s the culprit: radio. On Billboard’s Radio Songs chart, the third leg of the Hot 100 stool, “The Fox” doesn’t appear at all, even on a 100-position list. According to Billboard, last week “The Fox” had a U.S. radio audience of 1.8 million. Sounds like an impressive number, until you consider that the most-played song at radio, Katy Perry’s former No. 1 “Roar”, has an audience of 162 million.

“Gangnam Style” never got higher on Radio Songs last year than No. 12, but it’s actually impressive Top 40 radio was willing to play a 95% Korean-language song that much at all. Over a half-century of chart history, radio generally has preferred its novelty records in English. Falco’s 1986 No. 1 “Rock Me Amadeus” was helped in America by a half-English remix that kept the singer’s delightfully Teutonic diction but threw in some recognizable words. Los Del Rio’s 1996 hit “Macarena” languished on the charts for more than a year before the Bayside Boys remix that interspersed annoying American lyrics made it a smash.

Will Top 40 radio ever put “The Fox” into heavy rotation? Honestly, it may be an uphill battle (remember, this is a song whose chorus revolves around near-unpronounceables like “Jacha-chacha-chacha-chow!”), but it’s possible—and not without precedent. Though the song’s trajectory may seem quinessentially post-internet, it actually falls in line with the long history of novelty records becoming accidental hits. According to Fred Bronson’s Billboard Book of No. 1 Hits, songs as well-remembered now as Steam’s 1969 No. 1 “Na Na Hey Hey Kiss Him Goodbye” or Carl Douglas’s 1974 chart-topper “Kung Fu Fighting” started as jokes—tossed-off recordings meant to fill a 45’s B-side that record buyers and deejays latched onto as hits. In an age of tightly formatted radio, it’s a lot harder for novelties to reach No. 1, but—for better or worse—songs like Ylvis’s now have other routes to the top.