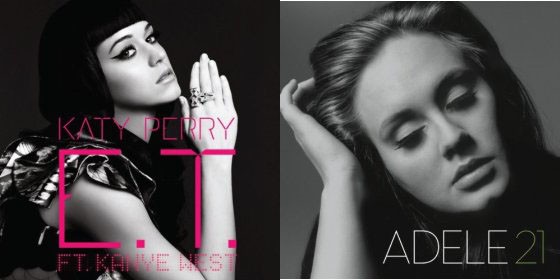 At first glance, the tops of Billboard‘s two big charts–the Hot 100 (singles) and the Billboard 200 (albums)–look pretty dull this week: returns to No. 1 by two ladies who have dominated since the winter (and, in one case, since last summer). But the interesting story is in the numbers behind the chart positions.

What’s remarkable about these two retreads at No. 1 is how much better they sold last week than they needed to–and how late in their respective chart lives those sales bumps came.

Adele’s album sold 153,000 copies, a number that would be nice for a release in its first chart week–we’ve had discs debut on top this year selling less than half or even one-third of that number–but is borderline-stunning for an album that’s nine weeks old. By a nearly two-to-one margin, 21 crushed the Billboard 200’s top debut, Glee Presents the Warblers (No. 2, 86,000), the 10th album spinoff from the TV/pop juggernaut. Speaking of which, “Turning Tables” was reworked by Glee last week, and Haley Reinhart vamped her way through “Rolling In The Deep” on American Idol–those inclusions probably bumped sales as well. But in a tracking week that ended with Easter, you’d expect the kid-friendly album to wind up on top; past years have seen discs by the likes of Miley Cyrus and Justin Bieber garner sales boosts in April from parents stuffing Easter baskets. (Maybe, after dominating record-buying adults for three months, Adele’s appeal is getting younger. More on that in a minute.)

Over on the Hot 100, which combines song sales with radio airplay, Katy’s single was pretty much expected to return to No. 1 after “S&M” cooled following a brief infusion of Spears-related iTunes sales. But did anyone expect the fourth single from Perry’s nine-month-old Teenage Dream to have its best chart week now? “E.T.” sold 344,000 digital copies last week, its highest seven-day cume to date. You can probably thank Idol for some of that bump too; Perry and West performed the track on Thursday night’s results show. But on radio playlists, “E.T.” has also ascended to the top–it’s now the most-played song in America (again, replacing “S&M,” which was radio’s top song for three weeks).

When it first reached the top of the Hot 100 a little over a month ago, “E.T.” entered Perry into a very elite chart club–it was the fourth straight No. 1 hit off her current album, making her one of just nine acts to pull four toppers from a single album. And those other three hits of hers–last summer’s “California Gurls” (featuring Snoop Dogg) fall’s “Teenage Dream” and winter’s “Firework”–haven’t been small ones. At its current pace, “E.T.” could wind up lapping all of them as the biggest hit from her album; it’s nearing 3 million in sales in its third month as a digital hit, racking up downloads at a faster pace than her last two hits and one that’s about par with “California Gurls,” which was the top-selling single of 2010. As it is, in another week “E.T.” is going to become the top-selling song of 2011 to date–its 2.489 million 2011 sales are a sneeze away from Cee-Lo’s “Fuck You,” which has sold 2.493 million in this calendar year.

So who’s on track to stop Perry’s run atop the Hot 100, if Rihanna could only pause it? Believe it or not, it might be Adele, whose “Rolling in the Deep” ascends to No. 2 on the Hot 100. Here’s where our two leading ladies cross paths.

If Perry is the consummate singles act of 2010-11, Adele is the quintessential album artist–21 is already the year’s top seller at 1.3 million. That’s more than half a million more than Mumford and Sons’ late-blooming Sigh No More, which stands at 719,000 for the year. Notice that the two biggest album-sellers of the year so far are from acts with decided oldster appeal; a plurality of Adele’s and the Mumfords’s U.S. buyers likely have mortgages, not bookbags.

But Adele’s fan base seems to be evolving. As of this writing, “Rolling” is iTunes’ top-selling single, meaning it’s clearly connecting with teens who listen to Top 40 radio (as well as their parents). In America, Adele hadn’t been much of singles act. The British belter eventually sold a million copies in America of her 2008 debut, 19, but she failed to make even the Top 20 of our Hot 100 with its singles; the lovelorn “Chasing Pavements” managed a week at No. 21. This year, though, program directors and singles buyers aren’t ignoring Adele. “Rolling” had its best sales to date last week, moving 298,000 units–off only 13% from Perry’s chart-topping sum.

Within a couple of weeks, Adele might pull off the ultimate crossover to Perry’s turf. She has some ground to gain on the airplay front: “Rolling” was the 12th-most-played song on U.S. radio last week, well off from “E.T.’s” dominant listenership. But Adele’s hit is rising fast–it was only 19th at radio the week before–and unlike Perry she has a powerful airplay ally on her side, adult-contemporary radio. “E.T.” is relying largely on Top 40 play, whereas “Rolling” has both that and the ubiquitous A/C format powering it. (Perry has scored only one serious hit at the glacially slow A/C format–her power ballad “Firework” is still charting high on the stations you hear while making a Duane Reade run.)

One final note: If you were thinking, a week ago, that the next new No. 1 single in America would have either Lady Gaga’s or Beyoncé’s name attached to it, think again. As has been widely reported across the interwebs this week, the two pop divas’ latest singles are both underperforming badly. Gaga’s “Judas,” which debuted the prior week at an underwhelming-for-her No. 10, couldn’t do any better in week two despite a full seven days of sales (in the debut week, an off-cycle Friday release for “Judas” meant it charted with only three days of sales); it slips to No. 12 on the Hot 100. And Beyoncé’s album-leading single, the too-cluttered-for-Chanel “Run the World (Girls),” is an apparent flop. She debuts on the Hot 100 at a ho-hum No. 33 and lackluster sales–77,000, to be exact, putting her on the digital sales list right below Mike Posner’s “Bow Chicka Wow Wow.” Oh, the ignominy!