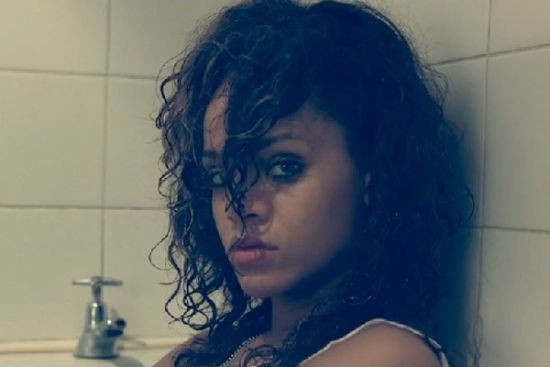 Pop-chart record-keeping can be as contentious as baseball’s, and we’ve got quite the steroids-style asterisk forming atop Billboard‘s Hot 100. On the most recent chart, the most pervasive radio star of the last half-decade brushed past a couple of legends into the hall of fame. And like Barry Bonds after his record-setting 2001 season, she isn’t done yet.

I’m talking about Rihanna, who scored her 11th billed credit atop the Hot 100 with the Calvin Harris-produced and supported single “We Found Love.” The electro-thumping midtempo track has been America’s top-selling single for two weeks now, and another 243,000 downloads sold this past week allows Rihanna to replace Adele’s five-week chart-topper “Someone Like You” in the top slot. Even though Adele’s torch ballad is the most-played song at radio, and Rihanna’s song only ranks seventh in airplay, the huge sales margin for “Found”—topping “Someone” by nearly 100,000 last week—gives Ri the edge.

To put it mildly, the Barbadian pop goddess is on a tear. “Found” is her fourth No. 1 single just in the last 12 months, following last November’s “What’s My Name” featuring Drake; December’s “Only Girl (In the World)”; and this April’s “S&M” featuring Britney Spears. That run of smashes (which was broken up by a few lower-charting singles, including the recent Top 10 “Cheers (Drink to That)” and the flops “Man Down” and “California King Bed”) has hurtled Rihanna into rarefied chart company.

Career No. 1 hits is one of the biggest chart barometers we have—only major superstars need apply. As recently as the early fall of 2010, before Rihanna started this latest run, her seven chart-toppers placed her in the neighborhood of such estimable pop kings as Phil Collins and George Michael. Now, by scoring her 11th No. 1, Ri has moved past the career totals of Stevie Wonder and Janet Jackson, and she’s currently tied with all-time diva Whitney Houston. If she keeps this trend going, she could be surpassing the likes of Madonna, the Supremes and even Michael Jackson within a year or two.

Holy “Umbrella”! How did this happen?

You’re probably wondering that, whether you’re a passive pop fan or a diehard Top 40 listener. Among the current crop of radio queens, Rihanna is crushing seemingly bigger luminaries like Lady Gaga or Katy Perry. And, oh my stars, Beyoncé—isn’t she supposed the be the one entering the pantheon of chart deities alongside Diana Ross? How exactly is Rihanna emerging as the chart superstar of our time?

The answer lies in the asterisk, a footnote that helps explain Ri’s meteoric rise and makes her the most forward-looking of the chart dominators. She’s the ideal artist for the iTunes era of digital pop.

Before we dissect whether the two “featuring” singles should diminish Rihanna’s achievement, let’s run down that all-time top 10 list of artists. Here’s the pantheon of penthouse-dwelling pop gods:

How does Rihanna stack up against the above list? Quite well, compared with those who are still ahead of her. From the debut of her first hit, “Pon the Replay” (No. 2, 2005), it’s taken her six years and five months to amass her 11 chart-toppers. The Supremes needed about the same amount of time to reach their 11th of 12; Mariah Carey took just under six years to score her first 11. Madonna needed more than a decade, and so did Houston. Michael Jackson required more than two decades, but that’s mostly because his first hits came so young. Only speed demons the Beatles and Presley were able to rack up 11 chart-toppers in considerably less time—just under two years for the Fabs, about three and change for Elvis.

More important, Rihanna is hardly the only act on that list who needed some kind of support. Featured credits are more ubiquitous than you’d guess. Even the Beatles had one: the single release of “Get Back” was credited in 1969 to “The Beatles with Billy Preston.”

Michael Jackson has one single where he shares equal billing with Paul McCartney (“Say, Say, Say,” 1983), and another supported by Siedah Garrett (“I Just Can’t Stop Loving You,” 1987).

Of the Supremes’ 12 chart-toppers, the last two, 1968’s “Love Child” and 1969’s “Someday We’ll Be Together,” gave Diana Ross lead billing over the group. (One could argue that that means the Supremes are a “featured” act on those hits, but that seems highly technical, and no chart geek docks the Supremes for that.)

Finally, Stevie Wonder had equal billing with McCartney on 1982’s “Ebony and Ivory,” and he was featured on a 1985 single nobody quite knows how to count: “That’s What Friends Are For,” a smash billed to “Dionne and Friends” that should have given four-way credit to vocalists Dionne Warwick, Wonder, Elton John and Gladys Knight. (Only some chart followers include this No. 1 hit on Wonder’s list; removing it would knock him down a peg but still keep him in the all-time top 10, tied on the bottom rung with a bunch of other acts with nine chart-toppers.)

That leaves just four acts in the pantheon with no shared billing of any kind on their respective lists of No. 1’s: Presley, Madonna, Houston and Janet Jackson. The three ladies have released hit singles where they shared billing, but none of those hits were chart-toppers.

The point is, when you’re building a career list of No. 1 singles, support helps. But only Rihanna did it by singing a hook on someone else’s hit.

As Al Shipley and I have noted in this space before, featured credits have gone from a rarity on the charts more than 20 years ago, to a regularity in the 1990s, to the absolute norm on the charts of 2000s. More than half of this week’s Top 10 songs on the Hot 100 are singles with some second-billed act, from Christina Aguilera’s featured credit on Maroon 5’s “Moves Like Jagger” to Sabi’s backup on Cobra Starship’s “You Make Me Feel.”

In many cases, featured acts provide little more than a hook, a verse or a rap bridge, sometimes nothing more than an intro. On Rihanna’s new No. 1 single, producer Calvin Harris gets featured billing even though he doesn’t sing a note. These are what you might call “window dressing” credits.

That’s absolutely not the case with the two No. 1 smashes on which Rihanna was featured. On both 2008’s “Live Your Life” and 2010’s “Love the Way You Lie,” Ri provided the song’s melodic component, in full, and arguably its most memorable element (unless you count the T.I. hit’s brain-sticky “Numa Numa” sample). If ever there were hits on which a featured artist deserved full billing, it was these two.

It also could be argued that the credits on singles today, cumbersome as they are, more accurately reflect the huge collaborative effort that goes into big hits. Perhaps we never saw singles in the ’60s billed to “Elvis Presley featuring Donna Jean Godchaux” or “The Beatles featuring George Martin,” but the myth of the artist as sole progenitor is long past its prime. If the ’70s chart-topper “You’re So Vain” were released today, its credit would read “Carly Simon featuring Mick Jagger”; a postmillennial release of the smash “Fame” would likely be credited to “David Bowie with John Lennon.”

Being both a lead act and the world’s preeminent hook-deliverer is one way Rihanna reflects the current pop charts. Her sales pattern is the other. More than any of her peers, she is the modern-day queen of the single.

Among the list of all-time Hot 100 chart-toppers ranked above, Rihanna is the only one without a chart-topping album. (Her 2007 disc, Good Girl Gone Bad, never made it past No. 2.) That not only sets her apart from the likes of Madonna, the Supremes and Janet Jackson, it also separates Rihanna from her current queen-of-pop peers; Beyoncé, Lady Gaga, Britney Spears, and Katy Perry have topped the Billboard 200 at least once.

This is either a career embarrassment for Rihanna, if you follow the line of thinking that albums are still more important than singles, or it reflects the reality of the modern music business. Singles are the currency of digital-era music, like it or not.

Rihanna’s singles sales positively dwarf sales of her full-length discs. Since her career began in 2005, she’s sold more than 44 million digital tracks (not counting featured performances), versus roughly 7.3 million albums. Among the queens of pop, this six-to-one ratio of singles to albums is topped only by Perry, whose skew since she broke in 2008 is nearly nine-to-one (roughly 30 million singles, only 3.5 million albums).

But for Perry, albums are still important organizing concepts—she’s mined five No. 1 hits from her most recent disc, Teenage Dream, and is currently working a sixth. In the time it’s taken Perry to release two albums (since the summer of 2008), Rihanna has released three albums plus a deluxe set. It’s empirically a different business model—when a Rihanna album even begins to seem like it’s running out of gas (read: radio singles), she and label Def Jam quickly drop another one. The forthcoming Talk That Talk, which lands in stores in two weeks, will follow Ri’s prior Loud by just 12 months. (Back in 2006, her second album followed her first by just eight months.)

The Rihanna approach is a reboot of Berry Gordy’s Motown business model of the 1960s: albums are meant to collect current and future radio hits, not to stand as any sort of artistic statement. Marvin Gaye and Stevie Wonder forcibly changed Gordy’s mind on that in the ’70s, but Rihanna has essentially brought back the singles-over-albums approach. While Beyoncé might seem more like the quintessential reinvention of the Motown ethos, promotional efforts throughout B’s post-Destiny’s Child career have been heavily keyed to her four, more conceptually coherent albums; her most recent, 4, has even sold fairly well despite producing not one Top 10 single.

Sure, Ri’s best-seller and best disc, Good Girl Gone Bad (2007), offered some amount of album-level coherence. One might even call the unreleased-to-radio “Breaking Dishes” a great album cut. (Just typing the phrase “Rihanna album cut” makes me chuckle a little.) But even Good Girl received a refresh a year after its release, with two new radio smashes added (“Take a Bow” and “Disturbia”). In short, no Rihanna disc is ever sacrosanct. Her albums are afterthoughts, and they’re not, at root, in any sort of conflict with your desire to rearrange their hits on your iPod. One might say the Rihanna oeuvre all but encourages you to shuffle to your heart’s content.

In the next year or two, as Rihanna inevitably pushes past Madonna and Michael on the all-time list of Hot 100 dominators, some chart fans and rock historians will look askance, and the call for baseball-style asterisks will get louder. Even a serious fan of hers wouldn’t argue that, artistically, she has shaped the Zeitgeist with anything close to the influence of the acts surrounding her; Rihanna doesn’t so much remold pop culture as reflect it.

Then again, viewed through the prism of the modern music industry, Rihanna’s placement on this list seems less like an aberration and more like the future.