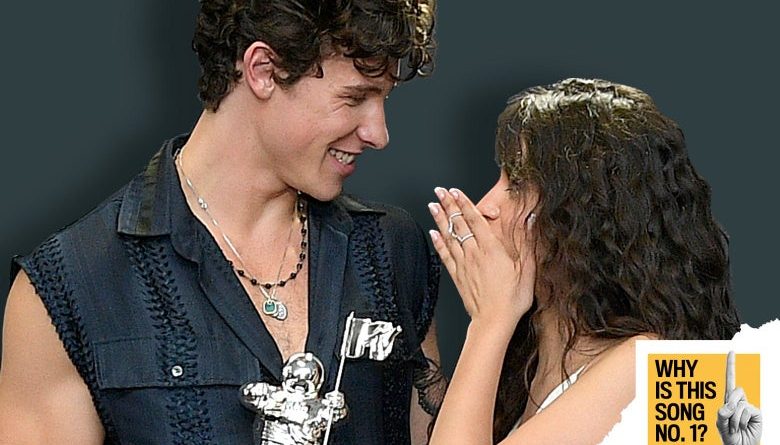 If singer-slash–nonthreatening boy Shawn Mendes got to choose a day in his life to relive over and over—as a wistful, horny Bill Murray longs to do in Groundhog Day—I’ll bet he would choose Monday, Aug. 26, 2019. Mendes’ awesome day climaxed on the MTV Video Music Awards, where his pop megastardom was repeatedly affirmed: not only by a pair of performing slots—Mendes was the night’s only guest invited to perform two separate times—but also when he won his first-ever Moonman trophy. He received the statuette alongside fellow pop superstar Camila Cabello, who also joined him for one of his performances at the VMAs and smoldered at him so convincingly it seemingly affirmed their couplehood after months of speculation. Oh, and I left out what was likely the best part of Mendes’ day, which was not televised: He arrived at the VMAs having just learned a few hours earlier that he’d scored his first No. 1 on the Hot 100—his smash duet with Cabello, “Señorita.” (By the way, dude just turned 21 three weeks ago, so he could even celebrate all this good fortune with a legal drink. I have no idea whether he and his apparent paramour made love like sea otters.)

I focus on Mendes in this moment of triumph because for Cabello these achievements are old-hat: The Fifth Harmony alumna swept the top two VMAs just last year and topped the Hot 100 a year and a half ago, all with her smash Latin–Anglo-pop hybrid “Havana.” But now, her friend and pas de deux partner has joined her, and the Hot 100 victory has to be especially sweet for him. Mendes has been on a steady five-year climb up the ladders of fame, chart success, and gradual, if sometimes grudging, critical acclaim. Honestly, putting my own critical hat on, “Señorita” is neither his nor Cabello’s best work. But it’s hard to begrudge the winsome pair their success. Both the song and the formerly gold-medal–less Mendes waited patiently for the win.

It was a pretty serious wait. “Señorita” was one of seven songs that reached No. 2 this spring and summer behind Lil Nas X’s “Old Town Road” during the latter’s record 19 weeks on top of the chart. “Señorita” debuted in the runner-up slot in early July, and after two months knocking around the Hot 100’s Top Five, it ejects “Bad Guy” by Billie Eilish, after the latter spent just one week on top. For the second week in a row, the top song in America is not on top of any of the Hot 100’s three metrics: streaming, airplay, or sales. But “Señorita” combines solid showings in each—fourth place in streams, fifth place in digital sales, and third in radio audience—into an overall win on the big chart. Crucially, “Señorita” is the most-played song at pure-pop radio stations, a key source of strength for both “Bad Guy” and “Señorita” that gave them a major assist over “Old Town Road.”

By the way, for my fellow chart-stats nerds out there, the rise of “Señorita” means one of Lil Nas X’s chart records is eroding. “Old Town Road” held the benchmark for frustrating the most runner-up hits, fending off seven No. 2 singles—from Taylor Swift to Ed Sheeran and Justin Bieber to Post Malone. The previous mark was held by Bryan Adams’ Robin Hood: Prince of Thieves smash “(Everything I Do) I Do It for You,” which held off five No. 2 songs in the summer of 1991. Now that two of summer 2019’s also-rans—“Bad Guy” and “Señorita”—have scraped and clawed their way to the top, X has only held off five No. 2s himself, which puts him back in a tie with the husky-voiced Canuck soundtrack king.

Mendes is himself Canadian, born in a Toronto suburb. This gives him something in common not only with the veteran Adams but fellow Ontario native Justin Bieber, a closer model for Mendes’ boy-to-man rise to pop fame. Bieber, too, knows a thing or two about topping the American charts with a Latin-flavored pop tune despite speaking not a word of Spanish. Notwithstanding his Latinate last name, Mendes is scarcely more Hispanic than Bieber: Mendes’ father is a native of Portugal while his mother is from England, and Shawn speaks neither Portuguese nor Spanish. Not that it matters, because the Anglophone “Señorita” can barely even be called Latin-flavored: The song has gone nowhere near Billboard’s Latin Songs chart and will not be playing on your local La Mega station back-to-back with the likes of J Balvin or Bad Bunny anytime soon.

Many of the lyrics in Mendes’ half sound as if they were ghostwritten by a travel agent: references to “land[ing] in Miami” and a “tequila sunrise.” The Cuban-American Cabello gives the song whatever spice it possesses, and her keening, sighing ooh-la-la–ing vocal is the song’s signature feature—to say nothing of her swooning and slinking in the song’s official video. With apologies to fans of ’80s Madonna, I would call “Señorita” the “La Isla Bonita” of 2019: a Latin-adjacent Anglo pop tune that wants to be sumptuously sultry, not rigorously authentic.

You can hear this in the lightly flamenco-flavored guitar licks on “Señorita,” played by Mendes himself—it’s his best contribution to the song, as he’s a fairly capable guitarist. After all, that’s how the kid landed a recording contract at age 15, after he posted a 2013 video of himself playing an acoustic cover of Bieber’s hit “As Long As You Love Me.” Having signed to the Universal conglomerate’s Island label, Mendes scored a quick hit in 2015, inspiring a generation of young guitarists (and irking a generation of older critics) with the strummy pop smash “Stitches,” a pleading, bleating, yearning Top Five hit in October 2015 that rhymed its title with “kisses” as if both words had 25 “I’s.” (I guarantee you’ve heard this song if you’ve had a tween or teen in your life in the past four years, and I sympathize.)

Like Bieber before him—except with better instrumental chops, and, thus far, fewer questionable life decisions—Mendes then proceeded to grow up, and improve, in front of the pop world’s eyes, a one-man boy band without the choreography. As his voice lost its high register and took on an appealing smolder, some of his biggest and best hits have run his guitar grace notes through the EDM ProTools machine. This has not been without its pleasures: I was a particular fan of “There’s Nothing Holdin’ Me Back,” a No. 6 hit in 2017 with electric guitar licks by Mendes and a relentless clap-along rhythm. It’s a sturdy template, and in essence, Mendes has recreated it a couple of times: 2018’s “In My Blood” (a No. 11 hit) lightly updated the prior hit’s soaring melody at a slower, more dramatic tempo, and 2019’s “If I Can’t Have You” (one of the No. 2 hits Lil Nas X foiled this summer) paired the chugging verses of “Nothing Holdin’ ” with an appealing falsetto chorus. Mendes and his songwriting team keep Rubik’s Cubing the formula just enough to keep it fresh.

On the album chart, at least, this pop-star-with-rock-bones has been consistently rewarded: All three of Mendes’ albums have debuted at No. 1, as fans dutifully showed up in week one to either buy or stream the hell out of them. Among 21st-century guitar-wielding solo American heartthrobs, only John Mayer has been a more accomplished album-seller, and Mayer doesn’t really top the charts anymore. (As for that other crush object who scored a minor stateside hit with a song named “Señorita,” Justin Timberlake usually leaves his guitar at home.)

“If I Can’t Have You” and “Señorita” are, in essence, stopgap singles for Mendes in the content-hungry Spotify age. He doesn’t have a new album out this year, but confusingly, the two tracks have been attached to a streaming-only reissue of his 2018 self-titled album. Both songs debuted at a lofty No. 2 on the Hot 100 anyway—a clear sign Mendes has reached the threshold of a reliable hit-maker. This explains why MTV gave him two performing slots—they didn’t want to choose between Mendes’ hits and let him perform “If I Can’t Have You” on the show, too.

Frankly, the chugging “Can’t” is the better song over the swooning “Señorita,” but you can understand how the latter is the one that went the last mile on the Hot 100. It’s got Cabello and a music-biz army behind it. Eight songwriters are credited on “Señorita”—twice as many as on “Can’t”—and in addition to Mendes and Cabello, most of the collaborators are industry heavyweights (not credits for samples): from the ridiculously prolific Benny Blanco to frequent teen-star collaborator Andrew “Watt” Wotman to versatile Kelly Clarkson–and–Beyoncé hit-writer Ali Tamposi. Even Charlotte Aitchison, aka Charli XCX—you’ll remember her as both a vocalist and co-writer of the mid-2010s smashes “I Love It” and “Fancy”—tossed ingredients into the stew. So this product of the Song Machine, issued by not one but two normally competing major-label conglomerates—Mendes is signed to Universal, Cabello to the Sony family—was just about the closest thing to a sure thing possible on the charts. Whether that makes it inspired is another matter. Among pre-sold, chart-topping superstar pairings throughout pop history—from Frank and Nancy Sinatra, to Celine Dion and R. Kelly—I’d call “Señorita” solidly middle of the pack as a pop hit.
(In other words, it’s no Donna-and-Barbra.)

As we head toward Labor Day, we might well call the past few months the Summer of Gen‑Z, as no one older than 22 has topped the Hot 100 since April, between debut artists Lil Nas X and Billie Eilish and budding twentysomethings Shawn Mendes and Camila Cabello. Unless 31-year-old Lizzo somehow parlays her unforgettable VMAs turn into a leap to No. 1 (a boy can dream…), this might mark the season when the chart’s longtime millennial domination begins to turn, and a generation of dominators—Drake, Ed, Taylor, Justin, all nearing or over 30—passes the baton. It may sound scary to us olds, but in a way “Señorita” should provide a bit of comfort. It’s about as old-school a hit as you’ll hear in 2019. Reminiscent of hot-weather hits dating back to the Hot 100’s founding, it’s the only latest theme from a summer place to waft through the air, before making way for another turning of the seasons.