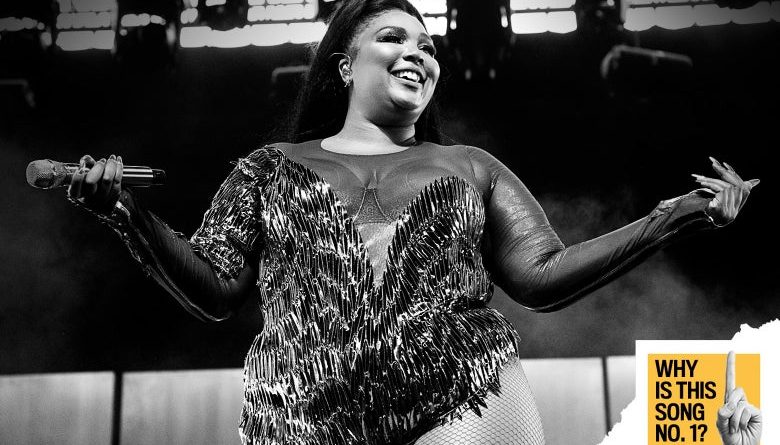 The singer has long been a hit with parents. “Truth Hurts” finally won over their kids.

When Barbershop: The Next Cut arrived in theaters back in April 2016, it became a modest hit and scored positive reviews. What will make that long-delayed sequel go down in 2010s pop culture history, however, is not the comedic stylings of Ice Cube. It’s the movie’s soundtrack, which served up the major-label introduction of one unforgettable performer with one immortal pop song: singer, rapper, and flautist Melissa Viviane Jefferson, who calls herself Lizzo.

Except here’s the thing: The delightful song that launched Lizzo in 2016, “Good as Hell,” was not a hit. In fact, three years after that image-defining song was released, Lizzo had yet to appear on Billboard’s Hot 100 chart at all, long after she had become one of America’s most media-adored, body-positive, your-best-girlfriend performers. It took until this past May for Lizzo to make her Hot 100 debut, and the song that did it—which, 16 weeks later, is now sitting atop the chart—is basically the un–“Good as Hell”: a darker, still funny but more acerbic empowerment anthem called “Truth Hurts.”

This song—a diatribe against good-for-nothing men—is awesome, because Lizzo is awesome. But explaining why it took “Truth Hurts” to make Lizzo an actual chart-topping star, rather than a perceived chart-topping star, means understanding the difference between modern pop fans and the over-25s likeliest to go to a Barbershop sequel. It only makes the story stranger that “Truth Hurts” was never meant to be a 2019 single, that it was largely ignored when it dropped in 2017, and that it has only now, finally, made Lizzo a big enough chart presence that its cuddlier predecessor is a belated hit. (“Good as Hell” just debuted on the Hot 100 this week.)

This is the third straight week I have a new No. 1 song to write about, and “Truth Hurts” is the third consecutive chart-topper that was knocking around the chart all summer, patiently waiting for “Old Town Road” to ride off into the sunset. But the similarities end there. Unlike Billie Eilish’s sleeper smash “Bad Guy” or Shawn Mendes and Camila Cabello’s sultry “Señorita”—heavily hyped 2019 singles by three of Generation Z’s leading stars—the 31-year-old Lizzo’s “Truth Hurts” was underestimated by everyone, including her. Just in terms of chart pattern, “Truth Hurts” was different: Unlike “Bad Guy” and “Señorita,” it did not debut within the Top 10 and then hover near the top of the chart for months during the reign of Lil Nas X. “Truth Hurts” materialized halfway down the chart in May, debuting at No. 50, then quietly climbed over the next four months. The week before Labor Day, “Truth Hurts” had reached an apparent ceiling of No. 3, already far better than anyone could have expected, and with the Eilish and Mendes/Cabello singles (both prior No. 2 hits) finally taking turns at No. 1, there was every reason to suspect Lizzo would place no better than bronze.

That’s when Lizzo took full advantage of a well-timed showcase, the MTV Video Music Awards. On the Aug. 26 show, her live medley of “Truth Hurts” and “Good as Hell” was arguably the highlight, supported by ass-baring backup dancers and a giant pneumatic posterior that both celebrated women’s curves and reinforced Lizzo’s consciously comedic persona. (Her video testimonial on behalf of 2019 Video Vanguard recipient Missy Elliott—whom Lizzo honored as an inspiration to her when she was “young and weird and chubby and a black girl and wanting to do music”—didn’t hurt, either.) For Lizzo, the chart impact was immediate: Billboard and Nielsen report that “Truth Hurts” saw a 21 percent increase in streams and a 102 percent boost in digital sales, making its rise to No. 1 on the Hot 100 the week after the VMAs a near-foregone conclusion.

Contrast all of this with the modest way “Truth Hurts” launched two years ago this month. Back in September 2017, t was just a stopgap single. By then, Atlantic Records and star producer Ricky Reed—the man behind percolating mid-’10s hits by the likes of Jason Derulo and Meghan Trainor—were nearly two years into their effort to make Lizzo a star. Before signing to the majors, the Detroit-born, Minneapolis-based, and classically trained artist had already cycled through stints in an indie electro group, the Larva Ink, and a pair of self-produced albums, Lizzobangers and Big Grrrl Small World, that ranged from hard rap to self-empowering R&B. Lizzo could seemingly do it all, but capturing all that personality in a defining hit was another matter. When she and Reed produced “Truth Hurts,” it was commercial enough for Atlantic to commission a glossy video, but in the fall of 2017, despite some admiring reviews, the single went nowhere.

Flashing forward to April of this year, when Lizzo at last dropped her full-length major-label debut Cuz I Love You, “Truth Hurts” was not on it. Like the three-year-old “Good as Hell,” the 18-month-old “Truth” felt like old news, a track that had helped lay the groundwork for the Lizzo persona. Atlantic instead led off the album with a more ebullient, “Good”-like single, “Juice.” But then fate intervened, and Lizzo once again found herself benefiting from (and outshining) a frothy comedy film. The same weekend her album dropped, Netflix issued its streaming-era rom-com hit Someone Great with “Truth Hurts” on the soundtrack and, prominently, in the trailer. This finally turned “Truth” into a hit, 20 months after it was first released. Driven largely by music streaming services like Spotify, where fans of the Netflix film went to find the track, “Truth Hurts” became Lizzo’s first-ever Hot 100 hit. Atlantic belatedly added it as a bonus track on Cuz I Love You and began promoting “Truth Hurts” to radio stations, where it eventually became a Top Five airplay hit, helping to fuel its four-month climb to greatness.

That word, great, is pivotal to what makes “Truth Hurts” so infectious. (It might also explain why the producers of a movie called Someone Great picked up the track for their soundtrack.) Its leadoff lyrical hook—“Why’re men great till they gotta be great?”—serves as both the song’s aperçu and its cri de cœur, its snarkily feminist call to arms. Like many hits in the streaming era, it leads off with one of its best lines, but the “Why’re men great?” line may only be its second- or third-best. The song is a parade of quotables, including “I just took a DNA test/ Turns out, I’m 100 percent That Bitch,” which eventually became—like “Old Town Road”—a TikTok meme. In an early 2018 episode of the musicology podcast Switched on Pop, recorded long before the song became a hit, Lizzo revealed that the song was practically a therapy session, a series of stream-of-consciousness utterances she shared with producer Ricky Reed on a crappy day when her self-esteem had been shattered. It’s a song that locates strength and sass out of sadness, and the music Reed produced matched Lizzo’s mood: a minor-key, four-note piano hook and a skittering beat that could be mournful but is instead inspiring.

It’s a different kind of inspiration, however, from the earlier you-go-girl tone of “Good as Hell.” “Truth Hurts” is the Lizzo persona translated into trap—it’s sonically of a piece with such recent SoundCloud- and Rap Caviar–driven, piano-based hip-hop hits as DaBaby’s “Suge” or BlocBoy JB’s “Look Alive.” This, I would argue, explains why the loopy, skeletal “Truth Hurts” was what it took to finally get Lizzo over on the charts. It solved a problem that was unique to her: crossing over from adults to kids.

This is not normally how generational crossover works. It’s supposed to go in the other direction. Consider Lady Gaga, for example, who once defined the cutting edge of youth culture but who, after her collaborations with Tony Bennett and Bradley Cooper, now sells primarily to adults. (And not just those who grew up with her: The A Star Is Born soundtrack was a smash with people who still buy CDs and were not teenagers when Gaga was at her hit-making peak a decade ago.) At 31, Lizzo is far from middle-aged, and her music has always had the unfiltered candor of youth.

But—and forgive me if I sound like a self-hating fortysomething here—“Good as Hell” was starting to become something of an albatross for Lizzo’s career, a parent’s favorite hip-hop song. It cropped up in movies ranging from the moms-gone-wild comedy A Bad Moms Christmas to the parents-gone-wild comedy Blockers. When I went to see the 2018 Amy Schumer self-improvement comedy I Feel Pretty and it closed with “Good as Hell,” I feared that the song was becoming the “Suddenly I See” of the late ’10s—a soundtrack producer’s lazy shorthand for feminism-lite. As if all this media overuse wasn’t enough, soon Hillary Clinton was, perhaps inevitably, quoting Lizzo on Twitter, and in this year’s Democratic primary, candidates from Kirsten Gillibrand to Kamala Harris to Corey Booker to Pete Buttigieg were all rocking Lizzo. Such resilience speaks well of “Good as Hell” as a song, but it only reinforced Lizzo’s voter-friendly inoffensiveness.

This put Lizzo in bizarro world: People my age think she became a chart-topping star three years ago. Teenagers, going into 2019, were largely indifferent to her. This imbalance probably wasn’t helped by the choice back in January of the, it must be said, totally delightful “Juice” as the leadoff single from Cuz I Love You. Essentially a sequel to “Good as Hell,” “Juice” was an attempt by Lizzo, Reed, and Atlantic to recreate the up-tempo, “Bootylicious”-gone-to-the-beauty-shop magic of its predecessor—and it failed to connect on the charts, scraping the Top 30 on adult R&B stations and going nowhere at pop radio.

It was only when the relatively foulmouthed “Truth Hurts” materialized on Netflix in the spring that Team Lizzo finally had a horse they could bet on, a single with all the sass of “Good as Hell” and “Juice” but the in-my-feelings moodiness of Gen Z trap. It was witty enough not to alienate the adults while giving their kids a pileup of meme-ready lyrics. Now that Lizzo has the ears of listeners her own age and younger, she is actually stepping backwards through her career and reintroducing her earlier singles. After performing “Truth Hurts” back to back on the VMAs with “Good as Hell,” she finally made the latter a Hot 100 hit, more than three years after it was released. “Good” debuts this week at No. 52 (an auspicious start—that’s almost as high as “Truth” did in May after its Netflix boost), and even “Juice” reenters the chart down at No. 82, also its highest position to date. What an Amy Schumer movie and a half-dozen Democratic presidential hopefuls couldn’t do, Lizzo achieved with some MTV twerking and an inflatable tuchus.

So the question now is, will Empowerment Lizzo—the Lizzo your mom and dad love—score hits the way Acerbic Lizzo already has? The Hot 100 of the late ’10s is often a referendum on what streaming fans want, and with “Truth Hurts,” Lizzo made herself conversant with the moody world of Drake, Ariana, and Halsey. But Lizzo’s quest for an actual, youth-directed hit is as old as rock ’n’ roll itself. I suspect she’s smart and talented enough to know that she doesn’t have to be all things to all people; what America loves is Lizzo, and now that she’s scored a raunchy, snarky hit that’s as true to her life philosophy as her up-with-people singles were, she can move forward being her badass self. She didn’t need a DNA test, or Billboard’s certification, to know exactly who she is.