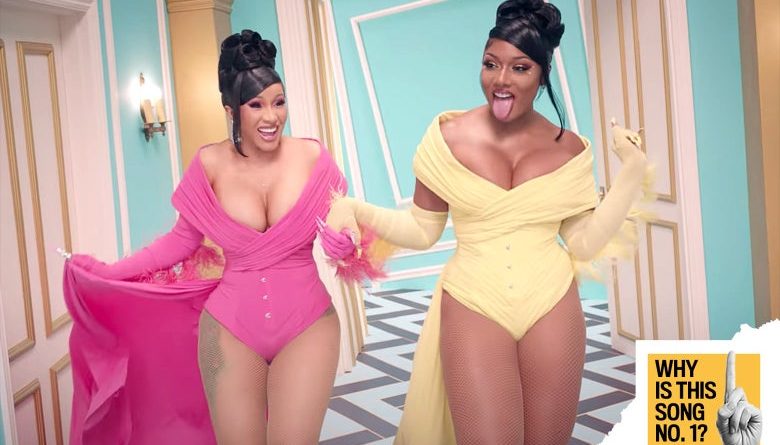 The video is a smash, but it’s the song that put it on top.

This month marks the centennial of vaudeville performer Mamie Smith’s “Crazy Blues,” a watershed for both blues recordings and Black women’s cultural expression. Smith’s August 1920 recording, lamenting a love gone wrong, eventually sold about 2 million copies and, over the next two decades, led to a flurry of hit records by Black women singing about their bodily desires. These included Ma Rainey with “Sweet Rough Man” and Bessie Smith (no relation to Mamie) with “Tain’t Nobody’s Biz-ness if I Do” or, later, the not-at-all subtle “Need a Little Sugar in My Bowl.” In her book Good Booty: Love and Sex, Black and White, Body and Soul in American Music, critic Ann Powers describes how early “blues stars like Bessie Smith and Ma Rainey served as erotic ambassadors.”

This is the fourth Hot 100 topper for Belcalis “Cardi” Almánzar (after “Bodak Yellow,” “I Like It,” and her feature on Maroon 5’s “Girls Like You”) and the second for Megan “Thee Stallion” Pete (after her collaboration with Beyoncé on “Savage”), but it’s the first time either one of them has debuted in the penthouse. It also continues an empowering 2020 trend for one-off female pairings. In a pop year that has already seen No. 1s by Megan with Beyoncé, Doja Cat with Nicki Minaj, and Lady Gaga and Ariana Grande, this summit by hip-hop’s two reigning queens makes the loudest noise of all. “WAP” opens to the largest streaming total of the year to date: 93 million U.S. streams, which probably could have made the song No. 1 even if it hadn’t sold a single dollar download or gotten any radio play.

That streaming total not only handily beats the best weeks of Roddy Ricch’s winter monster “The Box” (which maxed out at 77 million in late January), it ranks as the top streaming debut ever by any song in its first week. While considerably lower than the all-time streaming record of 143 million set last year by Lil Nas X’s “Old Town Road” featuring Billy Ray Cyrus, among songs by women, Cardi and Megan’s streaming total ranks second on the all-time list, just behind the 94-million peak week for Grande’s 2018 smash “Thank U, Next.” Grande’s hit racked up its highest streams after the belated launch of its video, which was packed with celebrity cameos and pop culture references and generated its share of headlines. And the “WAP” video? It came freighted not only with its own share of celebrity gawking—including an appearance from one token white celebrity, Kylie Jenner, whom half the internet wished hadn’t shown up—but also headlines that made the ones that “Next” inspired look rather tame.

This is one of those moments in this long-running Slate series where you probably think I don’t need to tell you why, broadly speaking, this song is No. 1. Whether or not you’ve been following the tick-tock of takes on “WAP” over the past two weeks, one look at that video will give you an idea. Sure, the visual was vital to the success of the audible, even if you’re not actually hearing the original song in that video. To ensure maximum YouTube play, Cardi B—who is setting up her forthcoming second album—agreed to sync the clip not to the song’s original, unexpurgated “Wet Ass Pussy” lyrics but rather to the bowdlerized, radio-permissible “Wet and Gushy,” which, cleverly, winds up sounding filthier somehow. (If you’d like to study the uncensored lyrics more closely, the duo’s team has provided a  lyric video illustrated with a cornucopia of food metaphors.)

Even if you’re down with Cardi and Megan’s no-holds-barred sex-positive feminism—which, to be clear, I am—skeptics might wonder whether this is really the No. 1 song in America or just the No. 1 video. When it comes to the charts, is the (ladies’ quest for) tail wagging the dog?

Seven years after Billboard added YouTube data to the Hot 100 and some of us critics fretted aloud that we might see dance crazes and gaudy spectacle overtake the chart, “WAP” might appear to some to be Exhibit A. But in the YouTube era, we have been confronted before by hit songs overpowered by their videos. The actual Exhibit A might be Childish Gambino’s 2018 hit “This Is America,” a song that, like “WAP,” entered the Hot 100 on top and was the eventual, unlikely Grammy winner for Record and Song of the Year. Even before that Donald Glover conversation piece about America’s history of racism and violence, there were other hits powered to the top by videos serving up exposed flesh. Robin Thicke’s now-infamous “Blurred Lines” was boosted in the summer of 2013 by its video featuring nude (in one NSFW version, topless) supermodels. Later that year, Miley Cyrus’ “Wrecking Ball” made a huge pole vault to No. 1 upon the release of its clothing-optional clip; three months later, it went back to the top spot driven by an affectionate parody video in which a bearded fan stripped down to his undies and rode a yoga ball in homage to Cyrus. And in 2014, Nicki Minaj scored her biggest hit to date, the No. 2 “Anaconda,” thanks to its posterior-celebrating video, which scored then-record YouTube views. (Minaj missed the Hot 100’s No. 1 spot due to unlucky timing, dropping her track the same week as Taylor Swift’s smash “Shake It Off” … which, come to think of it, had its own controversial video featuring twerking butts.)

So: Show some skin, top the charts, right? Except shaking butt doesn’t work if you don’t have the song to back it up. Does anybody remember Jennifer Lopez–Iggy Azalea teamup “Booty”? I wouldn’t blame you if you didn’t. The 2014 video, a seeming (un)dress rehearsal for “WAP,” served up the veteran Latin pop superstar and the then-hottest new female rapper, just months after she had scored the Song of the Summer, writhing and jiggling while singing and rapping about their eponymous assets. And yet the track was, pardon the expression, a stiff, debuting in the Top 20 on a week’s worth of video views and plummeting out of the Top 40 a week later. The song did fine in clubs but was a nonentity at radio. Even in the YouTube age, a sexy video can’t save a fundamentally boring song.

And “WAP” is anything but boring. Among the points that have been more gently debated in the media is whether the song is worthy of the hype surrounding it. It’s not my absolute favorite by either Cardi or Megan—I’d nominate either “Be Careful” or “I Like It” for the former and “Savage” for the latter—but it’s smartly constructed and often dazzling. Right from the jump, the track builds off a witty sample that’s a classic in the history of Baltimore club music: rapper Al “T” McLaran’s throaty, chanting hook about some “whores in this house,” from DJ Frank Ski’s song of the same name. The track is the handiwork of production team Ayo N Keyz, who also worked with Cardi on her studio debut, Invasion of Privacy, and—from that sample to the song’s rubbery thump—channel her winning, unfiltered persona. In terms of the actual rapping, Cardi deploys her usual mix of two parts bravado to one part bravura rhyming. But Cardi is most generous in showcasing her guest, Megan, who is the song’s blazing lyrical technician. Megan’s triple-time cadence on lines like “Gobble me, swallow me, drip down the side of me” put me in mind of Bun B’s head-spinning rhymes on Jay-Z’s 20-year-old classic “Big Pimpin’ ”—apropos, since both Megan and Bun B hail from Houston’s rap scene and are reportedly mutual fans.

Yes, the song is worthy, and for all the attention the video is getting, the numbers show that more Americans are consuming it as a song. Buried deep in Billboard’s rundown of the track’s many chart feats is the revelation that, among songs by women, it pulled the biggest-ever week of on-demand U.S. audio streams at services like Spotify (edging out yet another Grande smash, last year’s “7 Rings”). Its audio streaming number of 54.7 million is more than half of its total first-week streams of 93 million—meaning the video is not taking the lion’s (tiger’s?) share. Another data point: “WAP” sold 125,000 copies, a staggering sum in an age where the week’s top-selling download might shift one-fifth of that number. Yes, that sales total was fueled in part by the now-common gimmick of limited-edition physical singles packaged with instant downloads—but that’s still a whole lot of people who wanted to own “WAP” as a recording, staring at nothing more lurid than its bright pink vinyl.

Predictably, the only place “WAP” didn’t come out on top is on the airwaves. Its 11.6-million-impression radio audience is too low to make Billboard’s Radio Songs chart (where, by the way, the Weeknd’s enduring techno-pop smash “Blinding Lights” this week sets a record for most weeks atop radio playlists, surpassing a 22-year-old song by the Goo Goo Dolls). “WAP” has made inroads at rap radio, where it’s already a Top 20 hit, and R&B/hip-hop radio, where it’s in the Top 30. But as I noted above, the song’s FCC-skirting “clean” version, “Wet and Gushy,” isn’t exactly mild fare for family car rides. I could be wrong about the song’s eventual radio-friendliness—I’ve been wrong before—but let’s say, like the jarring “This Is America,” the licentious “WAP” never becomes a big radio hit. Does that matter?

Probably not anymore. The song is already, instantly at No. 1 because we now have better ways of measuring the reach of libidinous jams. For comparison, take a quick trip with me in the wayback machine to this month in 1987, when the No. 2 song in America was George Michael’s blunt and then-shocking “I Want Your Sex.” (I know, “Don’tcha think it’s time you had sex with me?” sounds downright wholesome next to Cardi’s “Bring a bucket and a mop for this wet-ass pussy.”) Michael’s supposed ode to “monogamy”—something he had to say to placate moralizers and MTV—was a bestseller in the age of AIDS, a single that eventually went platinum at a time when 45 sales were slumping and few singles even went gold. The week “Sex” peaked at No. 2, it was the bestselling song in the country, reportedly by a massive margin, but it had already peaked at No. 5 at radio stations, which were leery of playing it. (Many stations resorted to editing the track to repeat Michael’s line “I want your love” over and over, removing the “sex” entirely.) Because the Hot 100 back then used a pre-computerized formula where the magnitude of a top seller couldn’t be quantified (i.e., a top song selling 200,000 copies or 50,000 copies would be functionally equivalent in the chart’s math), the massiveness of George Michael’s sales couldn’t overcome his handicap at radio, and the song peaked in the runner-up slot. Whereas now, a song like Cardi and Megan’s, with overwhelming digital streams and sales, doesn’t need radio to dominate the chart—even if Cardi still cared enough about radio gatekeepers to produce the “Gushy” version.

We’ve come a long way in 33 years: from a paean to sex whose author, a closeted gay man, felt compelled to call it an ode to fidelity and couplehood and ran up against cultural anxiety anyway, to a bald demand for gratification by a pair of liberated Black women that has already won in the court of public opinion. “WAP” doesn’t need me to stick up for it: From newspaper columnists to pop critics, the acclaim is pretty much universal, and only the most risible right-wing clowns are bloviating against it, almost as if Cardi herself set them up as straw men. Not just her lust but her joy is infectious. The thing I love most about its sample of “Whores in This House”—what reminded me of those century-old recordings by Mamie Smith, Ma Rainey, and Bessie Smith—is how Al McLaran’s gutbucket vocal ties the song back to the origins of the blues. The great news, though, is neither Cardi nor Megan has the blues at all.