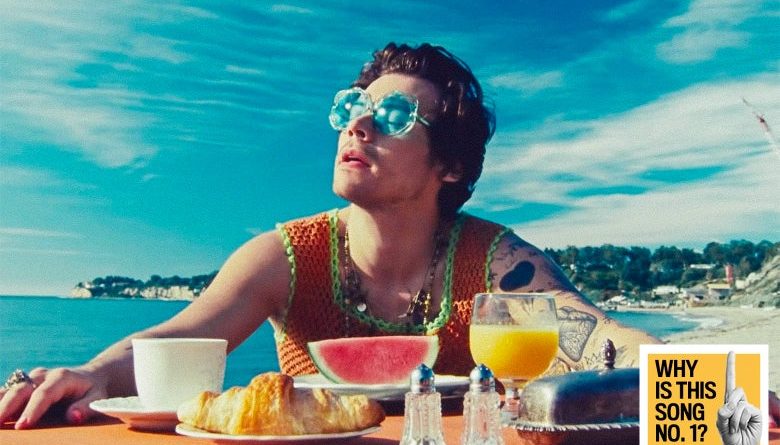 Like any boy band alumnus, he first had to overcome radio’s bias against teen heartthrobs.

Late summer is a great time for sleeper hits: songs that have been hanging around the charts for months and finally hit their stride. Four years ago, in August 2016, Sia’s “Cheap Thrills” reached No. 1 after knocking around the charts since the prior winter, getting its final boost from a Sean Paul remix. In September 2018, Maroon 5’s year-old “Girls Like You” slipped into the top slot after wafting around the Top 10 for more than four months, with a Cardi B verse putting it over the edge. Last year around Labor Day, Lizzo finally topped the Hot 100 with “Truth Hurts,” a song that was two years old and had been rising gradually on the chart since the spring.

This year’s sleeper hit is “Watermelon Sugar,” a wisp of a song by boy bander–turned–self-styled rock star Harry Styles. With a name inspired by Richard Brautigan’s hippie-era, post-apocalyptic novella In Watermelon Sugar, Styles’ lackadaisical tune is not only a sleeper but a grower, the sort of hit that sneaks up on you—I wasn’t sure it even had a fully written chorus the first time I heard it, and I’m pretty sure I’m not alone. Indeed, the whole nation took its time deciding that this quirky ditty would give the starriest, most eccentric member of One Direction his first-ever U.S. chart-topper.

“Watermelon Sugar” is the third single promoted from Styles’ second solo album Fine Line, which was released last December. That alone is remarkable, given the challenge in the digital age of generating chart interest in anything other than an album’s first couple of singles. Generally, in an era when all of an album’s songs are available to be consumed the day the album drops, you need a remix or a special guest of some kind to gin up chart action months after the song first hits streaming. “Sugar” has none of those. To be sure, there was some gimmickry fueling the song’s leap to the top, albeit of an old-fashioned kind: The song had its best week of sales ever thanks to an assortment of limited-edition vinyl and cassette singles that came bundled with a digital download. Those sales got “Sugar” the last mile on the charts, but Columbia Records wouldn’t have put the physical goods on sale if the song wasn’t already a radio smash—“Sugar” currently has the second-biggest U.S. airplay audience—and they knew they had an opening between current hits by Taylor Swift and a pair of lascivious female rappers I’ll almost certainly be writing about in this space next week. So, fair play to Team Harry: They took advantage of an open chart window, a tactic as old as the Hot 100 itself.

As “Sugar” leaps from No. 7 to No. 1 on the Hot 100 this week—essentially switching places with his ex-girlfriend Taylor Swift’s “Cardigan,” which falls to No. 8—Styles scores only the second-ever chart-topper by a member of One Direction. That includes all of the hits by 1D itself. In its five years of recording, from 2011 through 2015, the band never scored a Hot 100 No. 1. This despite topping the Billboard 200 album chart with its first four studio albums, the only group in history to launch a career with that haul. So … what was that other 1D-affiliated Hot 100–topper I mentioned? It was by ex-member Zayn Malik, the only member to break from the crew while it was still active. Zayn’s smoldering, Weeknd-esque boudoir jam “Pillowtalk” debuted at No. 1—and spent a solitary week there—in the winter of 2016, fueled by blockbuster streams and downloads ginned up by 1D superfans still mourning his departure the prior year and the group’s resulting, presumably permanent hiatus.

Explaining how the top-selling boy band of the 2010s could shift so many CDs and downloads but generate only two No. 1 singles means briefly recapping the fraught history of boy bands and the charts. Selling albums has never been hard for pinup pop groups, since the days of Meet the Beatles! and More of the Monkees. And in the ’70s and ’80s, such precision sing-and-dance troupes as the Jackson 5, the Osmonds, and New Edition managed to generate both gold albums and chart-conquering singles. In 1989, New Kids on the Block had the year’s second-biggest album and four of the year’s top singles, including a pair of No. 1s. But starting in the ’90s, as U.S. radio networks consolidated (fueled by the 1996 Telecommunications Act) and programmers more narrowly targeted specific demographics, radio stations shied away from maximalist teen-pop that appealed primarily to under-18 audiences. By the end of that decade, even as boy bands were enjoying a new wave of TRL-fueled popularity, radio became a chart handicap for them. The Backstreet Boys and ’N Sync had the top-selling albums of 1999 and 2000, respectively—the diamond-selling Millennium and No Strings Attached—but only scored a solitary Hot 100 topper between them, ’N Sync’s “It’s Gonna Be Me.” (Backstreet never hit No. 1: The deathless “I Want It That Way” peaked at No. 6.)

This radio bias against boy bands has persisted into the 21st century. And ever since the Hot 100 went digital about a decade and a half ago, teen-pop’s chart placements have been the result of a battle between rabid downloaders and radio gatekeepers—massive digital sales compensating for modest radio play. For example, radio was what kept the Jonas Brothers from scoring any chart-topping hits during their original wave of teen idoldom; their biggest hit of the ’00s, the No. 5 hit “Burnin’ Up,” sold 2 million downloads but only ranked 55th at U.S. radio. By the ’10s, the same fate befell one-man boy band Justin Bieber. In this long-running Slate series, I have chronicled the blow-by-blow between Justin Bieber and radio programmers that swung from Justin as hit-starved teen idol in the early ’10s to dominant young-adult chart-dominator in the late ’10s. In the early ’10s period, Bieber was a YouTube and iTunes demigod with not a single radio smash to his name. He could sell a half-million downloads of “Boyfriend” in a week and still fall short of the No. 1 spot, thanks (no thanks) to radio.

For One Direction, the chart patterns were the same. A Frankenstein’s monster that Simon Cowell famously threw together in 2010 on his televised competition The X Factor from five solo competitors—Niall Horan, Zayn Malik, Liam Payne, Harry Styles, and Louis Tomlinson—1D continually found its singles dragged down on the Hot 100 by radio, even as the band sold truckloads of albums. The pattern was set in fall 2012 when “Live While We’re Young” debuted with a staggering 341,000 downloads but could only get to No. 3 on the Hot 100, thanks to its 50th-ranked radio airplay. In the summer of 2013, the slyly Who-interpolating “Best Song Ever” became 1D’s highest-charting hit ever, debuting at No. 2 with record video views and near-record downloads, but at radio it never got past No. 53. “Story of My Life” (No. 6, 2014), “Drag Me Down” (No. 3, 2015)—no matter how many downloads sold or videos viewed, 1D could never top the Hot 100 so long as its radio spins remained limited.

The reason I’m running down all of this granular chart data is it reveals the hurdles both 1D and its post-breakup soloists had to overcome to top the Hot 100. Like Justin Bieber, they had to become credible radio fodder with adults as well as kids. With his early break from the group, Zayn was the first to pull this off. Though “Pillowtalk” debuted at No. 1 largely due to massive sales and streams, the carnal song did eventually become a No. 4–ranked airplay hit. Cleverly, Zayn had chosen a then-current EDM-inflected R&B mode and dropped his debut while the Weeknd was between albums. Other former 1D-ers have had their share of solid radio hits, including Liam Payne’s hip-hop–inflected “Strip That Down” featuring Quavo of Migos (No. 10 on the Hot 100, No. 4 on Radio Songs) and Niall Horan’s softly bopping pop jam “Slow Hands” (No. 11 Hot 100, No. 2 Radio Songs).

And Harry Styles? He decided to make things harder on himself. His 2017 debut album was chockablock with old-school classic rock. This would be like launching a career in 1964 with big-band jazz. While Styles’ fame ensured a big launch for his Bowie-esque single “Sign of the Times”—it opened, and peaked, at No. 4 on the Hot 100, fueled by strong downloads—radio showed only moderate interest. It eventually reached a modest No. 21 on the airplay chart. Later Harry singles like the twangy “Two Ghosts” and the thrashy “Kiwi” missed the Hot 100 and had little radio profile beyond a handful of pure-pop stations that were loyal to Styles from his 1D days. One admired Harry for following his artistic muse—more Joni Mitchell than Justin Bieber—but as a pop star, he arguably squandered his momentum coming out of One Direction.

What has made Fine Line, Styles’ sophomore album, such a clever left turn is he retained the rock flavor he naturally gravitates toward but converted it into mellow California-style surf-pop, and he let his production team—Tyler Johnson and Thomas “Kid Harpoon” Hull—fashion the songs into percolating radio jams. Each single has opened the door a bit wider: “Lights Up,” a No. 17 last October, is lightly strummed beach music with ethereal backing vocals. And “Adore You,” a No. 6 hit in April (for my money, still Styles’ best single), is thumping electropop. “Adore” in particular served as Styles’ entrée onto radio’s A-list—it reached No. 1 on mainstream Top 40 stations and No. 2 on Radio Songs by early summer.

With this beachhead established, Harry was finally free to let his freak flag fly with “Watermelon Sugar,” which is simultaneously his oddest single and his most infectious. The chorus consists of nothing more than the line “Watermelon sugar high” repeated a half-dozen or more times, with emphasis on the “HIGH.” (TikTok users have keyed into this idiosyncrasy, sharing videos in which the “high” gets its own video edit of the user playacting her best stoner face.) Last November, when Styles did double-duty hosting and singing on Saturday Night Live, “Sugar” was one of the songs he performed, and in that indoor setting, it came off as willfully quirky and seasonally incongruous; the song’s first verse line is “Tastes like strawberries on a summer evenin’.” Now, timed for 2020’s beach season—complete with a video filled with beautiful people on the shore, shot just before the pandemic and, according to a title card, “dedicated to touching”—it’s sitting atop the hit parade.

In short, Harry Styles finally has a profile on the radio and on the Hot 100 that matches his profile on magazine covers, and he achieved it on his own schedule and something like his own terms. Like John Lennon in the ’70s—the founder and nominal leader of the Beatles but the last former Fab to reach the toppermost of the poppermost as a solo artist—Styles just had to find his own way. As that onetime teen heartthrob sang, “Whatever gets you to the light, it’s all right.”