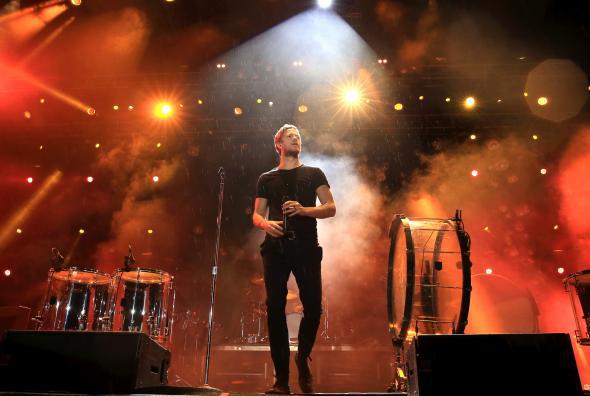 On Billboard’s Pop Shop podcast a couple weeks ago, the magazine’s associate editor Jason Lipshutz and associate director of charts Keith Caulfield were politely debating whether the new album at No. 1 had had a great week or a meh week.

Imagine Dragons’ Smoke + Mirrors opened at No. 1 on that week’s album chart with 172,000 in pure sales. (By the album chart’s new math, which also bakes in streaming and track sales, the cumulative total was 195,000 units.) Lipshutz declared it a “really strong album debut,” but Caulfield demurred. “Well, I mean, is this really that strong?” he mused aloud. “I guess I was expecting Imagine Dragons to be bigger. You know, ’cause their first album did two and a half million. It has never left the chart—it has been in the top [half of the album chart] for every single one of its 129 weeks, except for just two. It generated three top 20 hits on the Hot 100 chart. So I mean, they have this great track record—I think, though … they’re still a fairly anonymous band, in many ways, to the general public.”

They both had a point. It’s fair to call 172,000 an impressive number for the waning days of winter—the slow season for the music industry, except when the Grammys are on. In January and February, we’ve seen albums debut at No. 1 with less than one-third that number.

On the other hand, this sophomore debut is rather feeble for a band that blanketed the airwaves for much of 2013 and 2014. If you’ve been anywhere near a radio recently, you know what ID sounds like—like it or not. Their first top 20 hit, the twinkly “It’s Time,” jumped on the strummy post–Mumford & Sons bandwagon; their second hit, the dubsteppy “Radioactive,” was a top three hit and omnipresent summer 2013 blockbuster; and their third hit, the mid-tempo, Coldplayish “Demons,” a top 10, split the difference sonically between the first two hits.

The album that spawned these three hits, Night Visions, peaked at No. 2 on the album chart, but is now nearly triple-platinum. Obviously it’s too soon to tell if Smoke + Mirrors will have the chart longevity of its predecessor. But one week later, Smoke tumbles out of the top slot, all the way down to No. 9, selling 75 percent fewer copies in week two (a not-unprecedented decline after a No. 1 debut, but definitely on the steeper side). In short, this debut has the whiff of the opening-weekend gross for, say, the 2013 movie Riddick: Every hardcore fan of the franchise shows up immediately, but the product has no legs.

I would call the Dragons’ first-ever No. 1 album a textbook example of The AC/DC Rule. That’s a term I coined to describe albums that open bigger than their longer-lived predecessors—it states that initial sales of an album are a referendum on the public’s feelings about the act’s prior album, not the current one. So, for example, AC/DC’s first No. 1 album wasn’t 1980’s deathless Back in Black but rather its 1981 follow-up, For Those About to Rock, We Salute You (hence the rule’s name). Or Depeche Mode—their only No. 1 wasn’t 1990’s world-beating Violator but 1993’s low-on-hits followup Songs of Faith and Devotion. Norah Jones’ million-copy sales week wasn’t for her diamond-certified 2002 blockbuster Come Away with Me; it was for her lower-selling 2004 follow-up Feels Like Home. And so on.

But the Dragons have an extra shadow hanging over them. They aren’t just trying to follow up a best-selling album; they’re trying to live up to one specific song. That would be their aforementioned second hit, “Radioactive,” which was more than a summer hit—it was a fall, winter, spring, and summer hit. And fall again. And the following winter. Then another spring. “Radioactive” spent a total of 87 weeks—roughly a year and eight months, from late August 2012 to early May 2014—on the Hot 100, Billboard’s flagship pop chart. That’s the longest Hot 100 run of all time.

Some stat, right? “I Want to Hold Your Hand,” “Stayin’ Alive,” “Billie Jean,” “Smells Like Teen Spirit”—“Radioactive” rode the Hot 100 longer than these four songs combined. A chart run as historic as “Radioactive’s” does reflect some kind of popularity. Unfortunately, to those of us who follow the charts closely, it’s also something of a curse—arguably an even bigger jinx than Best New Artist at the Grammys. In a way, Imagine Dragons trying to follow up this hit song makes me feel sorry for them.

Some brief chart history: Prior to the late ’70s, the Hot 100 wasn’t built for long chart runs, as 45-RPM hits turned over quickly at record stores and radio stations. Even the biggest hits tended to cycle through the chart in under six months—for example, none of the Beatles’ hits rode the chart longer than 19 weeks; none by the Rolling Stones longer than 24 weeks. Of course, the methodology behind the Hot 100 has changed radically over the decades, and as better data has been added to the formula in recent years, we’ve seen songs sit stone on the chart for months on end. These modern chart runs more accurately reflect just how tenaciously the American public holds onto a big hit and doesn’t “Let It Go” (that song, by the way, was on the Hot 100 for 33 weeks, or three times as long as “Yesterday”).

The first song to spend as much as 40 weeks on the Hot 100 was Paul Davis’ 1977 hit “I Go Crazy,” a spoonful of soft-rock pablum that finally reached its No. 7 peak in early 1978 after a slow, steady run. Davis’s record held until 1982, when “Tainted Love,” Soft Cell’s indelible new-wave cover of Gloria Jones’ northern-soul chestnut, peaked at No. 8 in a 43-week Hot 100 run. The synth duo wound up holding the record longer than anybody, about 11 years.

After Billboard added more accurate SoundScan sales and computer-monitored airplay to the Hot 100 in 1991, chart runs got longer. Between 1994 and 1998, as songs rode the chart longer, the longevity record turned over several times:

After Rimes took the Hot 100 longevity record from Jewel in late 1998 with her 69-weeker, she wound up holding it for just over a decade. Only two songs since then have stolen it. Jason Mraz took it from Rimes in 2009 with his doot-doo-dooing bro-jam “I’m Yours”; it only reached No. 6 but held onto the chart for a numbing 76 weeks in 2008 and 2009. He held the record for about four and a half years, before Imagine Dragons finally took it with “Radioactive”—peaking at No. 3 in the summer of 2013 and tallying up an insane 87 weeks ending in the spring of 2014. (One other song—Awolnation’s quirky electro-rock “Sail,” a No. 17 hit—also topped Rimes and Mraz with a 79-week run, but because it charted concurrently with “Radioactive,” it never held the record.)

So what patterns can we find in this parade of schlock? The list is not exactly studded with classics—“Missing” is pretty great, and my fellow Gen-Xers who love both synth-pop and karaoke will join me in repping for “Tainted Love.” But on the whole it’s a catalog of aural wallpaper—elevator fodder like “I Go Crazy” and “How Do I Live”; drugstore-checkout-line perennials like “You Were Meant for Me” and “Barely Breathing”; the low-rent party jam “Whoomp!” (which, given its high energy, actually comes off better than much of this list).

Regardless of your opinion of these record-holders as songs, a couple of data points bring the dubious appeal of this chart record into sharper focus. First off, there are no No. 1 hits. Generally, if a song has the power to reach the top of the Hot 100, it is on and off the chart in under a year—a fast rise, a big peak, a relatively fast fall. (For example, the current No. 1, Mark Ronson and Bruno Mars’ “Uptown Funk!”, is in its ninth week on top but only its 16th week total on the chart.) Whereas a song that hangs on vise-like tends to follow the George Costanza model—it’s a lazy earworm that’s irritating the first few times before you’re humming it in the shower.*

The harder data point is this: A longevity hit is basically a career momentum-killer. Of the nine singles that held the record—“I Go Crazy,” “Tainted Love,” “Whoomp!” “Missing,” “Barely Breathing,” “Meant”/“Foolish,” “How Do I Live,” “I’m Yours,” and “Radioactive”—about half were the artist’s last Top 40 hit. Soft Cell, Tag Team, Everything But the Girl, and Duncan Sheik either returned to the Hot 100’s lower rungs or not at all. Rimes did a little better, coming back to the Top 40 a handful of times but never the top 10. Three of the other acts managed to return to the top 10 one more time each: Jewel (with “Hands”), Mraz (with “I Won’t Give Up”), and the Dragons (with “Demons”), all of them smaller hits. Oddly, of the nine record-setters, only Paul Davis managed to peak a little higher with a follow-up hit—1982’s bouncy yacht-rocker “’65 Love Affair” hit No. 6, one notch higher than “I Go Crazy.”

This, then, is the curse of the Hot 100 longevity record: It’s both career-defining and a fluke. If you score a No. 1 hit, even one that stays on top for months, it’s possible to come back with another massive hit. But a hit song that sticks around the charts for a year or more tends to wear out an artist’s welcome with the public, and it pigeonholes them for all time. And “Radioactive”—with its lurching rhythm and bludgeoning chorus—is a particularly strange song by which to be defined.

This explains why even the chart experts at Billboard can’t agree on what we should expect from Imagine Dragons now. Forget their prior album—just following up “Radioactive” is a huge uphill battle. The fact that “Demons” did well, even before the previous album-promotion cycle was over, provides reason for them to hope. But of the three tracks from Smoke + Mirrors released to date, only two have hit the Hot 100—“I Bet My Life” reached No. 28, and “Shots” (the beneficiary of a very expensive four-minute commercial during this year’s Grammys) peaked at No. 75. I am no ID fan, but the chart nerd in me kind of wants the Dragons to make the top three one more time, just to see if this curse can be overcome. For once, a “Whoomp!” wouldn’t be followed by a “womp.”