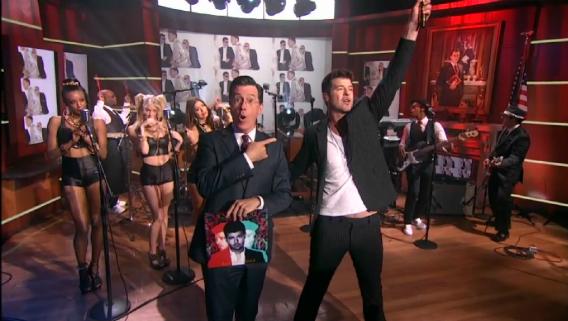 Slate
9 August 20134 January 2019
When Stephen Colbert devotes an entire show to satirizing the competition for the “Song of the Summer of the Century,” the very idea of One Song to Rule Them All between Memorial Day and Labor Day has reached a certain status. It’s become both an American tradition, and something so overhyped it’s worth questioning.

So I understood the skepticism of my friend Chuck Eddy—longtime music critic, beloved iconoclast—when he asked me this week “whether ‘Song of the Summer’ is a legit concept at all.” “Has anybody ever traced where it came from?” he asked. “Like, was it some brilliant marketing brainstorm …? There are lots of songs every summer, not just one; why pretend otherwise?” No matter how you feel about Robin Thicke vs. Daft Punk, it’s a valid question.

If I may defend the Summer Song–Industrial Complex for a moment, it is a fairly intuitive concept. While there are many hits in the average summer, one song tends to dominate. And it’s not like the idea just sprang from Madison Avenue recently—47 years ago, the Lovin’ Spoonful recorded a song called “Summer in the City.” They dropped it in July, and it went to No. 1 that August for three weeks, the longest stay in the penthouse by any song in summer 1966. Summer smashes happen, and some are just bigger than others.

A search on the Nexis news database turns up only a few stray, earlier examples. In a 1981 profile of the Knack in Canada’s Globe and Mail, critic Liam Lacey referred to the band’s 1979 megasmash “My Sharona” as a ditty “recorded in only 20 minutes [that] wound up the runaway song of the summer.” A 1986 Miami Herald piece by veteran music journalist Tom Moon noted that Peter Gabriel’s chart-topper “Sledgehammer” was “considered by many to be the song of the summer.”

But chatter about summer songs qua summer songs didn’t become its own pastime until after hip-hop took off. DJ Jazzy Jeff and the Fresh Prince’s “Summertime”—essentially a meta-song about summer songs—hit No. 3 in 1991. New York hip-hop radio station Hot 97 began its now 20-year-old Summer Jam concert series in 1994.

A year later, the connection between summer and hip-hop jams was cemented by a New York Times Magazine cover story on “The No. 1 Summer Song of Love.” The piece by Stephan Talty is, mostly, a loving tribute to “I’ll Be There for You/You’re All I Need to Get By.” The 1995 hit (No. 3 Hot 100, No. 1 R&B) was a medley/remix of a track by Wu-Tang rapper Method Man, paired strategically by his label Def Jam with hip-hop-soul queen Mary J. Blige, who crooned elements of the Marvin Gaye–Tammi Terrell soul classic. Talty’s article only meant to chronicle the creation of a song of summer love, not a song of the summer per se. But he ends the piece with a list of 40 years of dominant summer love songs, and he begins it by defining the terms:

During the 40 years since rock-and-roll first altered the course of pop music, a soulful summer tradition has emerged. Each year, one song separates itself from the pack, exercising a deep, calling-out power over anyone who falls in love between June and September.

Four years later, in the news pages of the Times, esteemed critic Ann Powers amped up the competitive element. Just after Labor Day, she framed her recap of summer ’99 as a series of one-on-one song battles to determine “the song of the summer”: “Livin’ la Vida Loca” vs. “Bailamos,” “Bills, Bills, Bills” vs. “Unpretty,” “What’s My Age Again?” vs. “My Own Worst Enemy.” (Ann’s big winner, in that summer of TRL, boy bands and megapop? Backstreet Boys’ “I Want It That Way,” of course.) By the mid-’00s, the Times’ then–pop critic Kelefa Sanneh was regularly handicapping contenders, including his early call in 2007 (obvious in hindsight) of Rihanna’s “Umbrella.”

It should be noted that chart bible Billboard, until very recently, hadn’t tracked summer songs as a discrete category. Its 55-year-old flagship, the Hot 100, is a fine barometer of hits in all seasons. But the magazine caved in to the hype in 2010, launching a Songs of the Summer chart—a 10-position list, based on aggregate data from the Hot 100, and published exclusively on its website for only about three months each year. (That same year, Billboard put together an entertaining feature listing the Top 10 summer songs for each year dating back to 1985, but they were backtracking; no such charts had been in the magazine all those years.)

Still, Billboard didn’t need to produce an actual Summer Songs chart to affirm that dominant summer hits are real; the Hot 100 provides ample evidence. If you’re a Gen-Xer like me, and your first awareness of big pop hits started in the late ’70s or early ’80s, summer smashes are practically your birthright. From 1978 through 1984, every year but one, Billboard’s No. 1 song of the year was a hit that peaked in the summer or close to it:

During this period, only 1982 does not conform to the pattern—Olivia Newton-John had the top Billboard hit of that year with the winter smash “Physical.” (Even that year, the Human League’s summer smash “Don’t You Want Me” made a huge impact and arguably broke video-driven new wave on the U.S. charts.) So I don’t think it’s a coincidence that my fellow Gen-Xers are now editing the magazines and web publications that are flogging the Song of the Summer meme the hardest.

Still, to be fair to Chuck Eddy, does any of this data justify all this propaganda? Probably not. Chuck is right that overemphasizing a grudge match between just two 2013 songs rather diminishes the charms of, say, Icona Pop’s “I Love It,” Miley Cyrus’s “We Can’t Stop,” and Bruno Mars’s “Treasure.” Why does there have to be only one?

I guess it’s just hard to let go of the ideal of the commanding summer hit, the way you remember it in your youth. I turned 13 in 1984, and in my memory, that year will always be about Bruce and Madonna and Cyndi and Tina and the Durans and heck, John Waite. But by my recollection—and Billboard backs me up—Prince crushed ’em all.

* I’m counting 1980’s top hit, “Call Me” by Blondie, because it barely predated the summer and lingered in the Top 40 past the 4th of July.