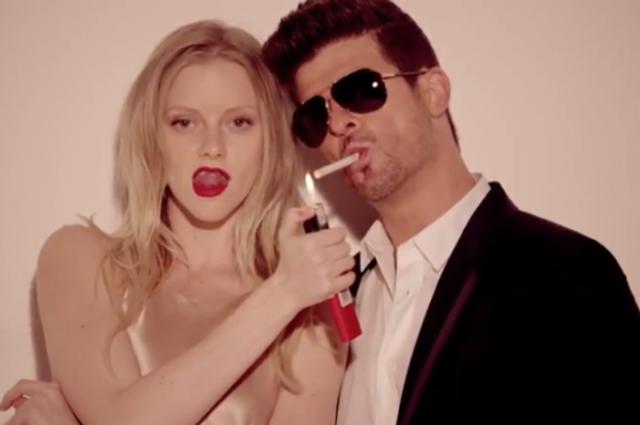 On Monday here at Brow Beat, Forrest Wickman wrote about President Obama “singing” (in supercut form) Daft Punk’s “Get Lucky,” and declared that the single “seems more and more destined to be the song of the summer.” The only question, he wondered, was whether it could “topple its nearest competitor, Robin Thicke’s Marvin Gaye–inspired ‘Blurred Lines’ ” on the pop charts.

Like Forrest, I am totally down with “Get Lucky” being named the 2013 Song of Summer by general acclamation. (We’ve all certainly been expecting it since around Memorial Day.) With its fluttering Pharrell Williams vocals and tasty Nile Rodgers vintage-disco riffage, “Get Lucky” sounded like a minor pop classic the first time you heard it. And it sure as hell sounded like beach music, a worthy leadoff track to the Culture Gabfest’s annual Summer Strut Playlist.

But sadly, as a pop-chart follower and Billboard whisperer, I know the game is already over, and Robin Thicke has likely won.

“Blurred Lines”—also sporting Pharrell vocals and a ’70s-esque vibe, but more in the “Got to Give It Up” mode—has now been atop the Hot 100, Billboard’s authoritative pop chart, for three weeks. When “Get Lucky” moved up to No. 2 last week, it may have appeared that Daft Punk were making a move to replace Thicke. But they’re not. The problem on this week’s Hot 100 for the French robotic duo isn’t just that they hold at No. 2 behind Thicke again. The trouble is that Thicke’s single has, as political wonks might say, “the Big Mo” on its side. When it comes to every component of the Hot 100—digital sales, radio, online streaming and video—it appears unstoppable.

When “Blurred Lines” took over the top spot on the Hot 100 three weeks ago, it made a big move from No. 6 to No. 1, actually vaulting over ”Get Lucky” (as well as Justin Timberlake’s “Mirrors,” another song that was patiently waiting its turn at No. 1 but had to settle for a No. 2 peak). Thicke’s leap was fueled by a surge in digital sales: As of mid-June, “Blurred” was starting to roll more than 300,000 downloads a week, and this week Billboard reports its weekly sales are surging past 400,000. Meanwhile, “Get Lucky” has been bumping around in the high 100K’s for most of the last month. “Lucky” is also disadvantaged on the radio: It’s increasing in spins every week (up to No. 4 on Billboard’s Radio Songs list), but “Blurred” is growing at radio even faster (up to No. 3). Finally, streaming appears to be a wash—Daft Punk are ahead of Thicke at on-demand services like Spotify, but Thicke leads in streams (including YouTube) overall.

So why is this happening? For one thing, Daft Punk’s success on one chart may well have hurt them on another: The blockbuster sales of their album, Random Access Memories—already gold after a month of release—appears to have left many fans not needing to download its big single. Thicke’s album, meanwhile, hasn’t even dropped yet. Until Blurred Lines, the album, hits stores in late July, there’s nothing competing for the wallets of the song’s lovers.

Bottom line: “Get Lucky” is growing every week, but not enough, and “Blurred” is pulling away. Adding all the Hot 100 data components together, Billboard reports that last week, Daft Punk grew in chart points by 1 percent, and this week grew by another 7 percent. Meanwhile, Thicke last week grew by 18 percent in chart points and this week by another 20 percent. It’s probably all over but the (cyber) crying.

Sure it does. The undisputed Song of the Summer of 2006, Gnarls Barkley’s now-classic and much-covered “Crazy,” also stalled at No. 2 that July and August behind two inferior No. 1 hits—Nelly Furtado’s pleasantly shimmering Timbaland earworm “Promiscuous” and Fergie’s godawful and long-forgotten single-entendre “London Bridge.” Other years, even when the summer’s biggest No. 1 hit is a great one, it might be holding another great song back: In 1965, the Beatles’ “Help!” monopolized the top slot, holding Bob Dylan’s “Like a Rolling Stone” at No. 2, and in 1984, Prince’s “When Doves Cry” blockaded Bruce Springsteen’s “Dancing in the Dark.” (Frustrating in both cases if only because neither Bob nor Bruce has ever scored a Hot 100 No. 1.)

What we have this summer is a small embarrassment of riches, sort of a minor version of 1965 or 1984. “Blurred Lines” may not be a stone classic, but it’s summery enough, and the one-two punch of “Blurred” and “Lucky” in the top two slots is pretty terrific. In any other year where Robin Thicke’s hit weren’t going up against a song as cool as Daft Punk’s we’d be delighting in its charm and hooks.

Perhaps we’ll have a better idea how classic “Blurred Lines” is when the Obama Sings guys decide to cover it. Your move, Mr. President.