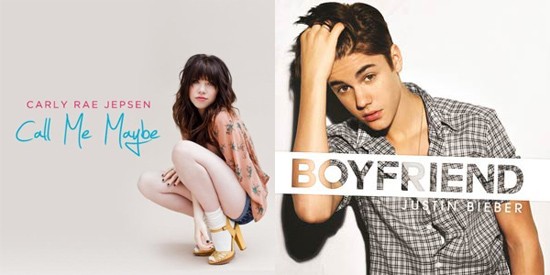 After three weeks of patiently waiting at No. 2 on Billboard‘s Hot 100, Carly Rae Jepsen this week became the first solo female Canadian since Céline Dion to top America’s premier song chart. Right on schedule for the start of summer, the ubiquitous “Call Me Maybe” finally climbs into the penthouse.

Or should I say treehouse? With its featherweight synth-string arrangement, its gently clubby dance beats and its boycrush-oriented video, “CMM” is the closest thing to a pure teenpop song we’ve had at No. 1 since the turn of the decade. You can keep your Teenage Dream, Katy Perry—it’s Jepsen who’s poised to clean up at the Teen Choice Awards this year.

Interesting, considering that Jepsen is 26. That’s eight years older than fellow Canadian and actual teenager Justin Bieber, who with the tweet heard ’round the net helped break Jepsen in America. He’s having a busy week, too, having just dropped his preordained blockbuster album Believe.

The age difference between these two—plus Carly Rae’s gender—may account for why she is sitting atop our singles chart and he isn’t. Bieber’s album is poised for a massive No. 1 debut next week. But if he’s ever going to earn a No. 1 U.S. single to match his blockbuster album sales and online-media dominance, he’s going to have to get past U.S. radio programmers, who are inherently averse to the objects of teen crushes. Getting kids to buy singles by major teenpop acts has never been all that difficult. Getting radio to play those same songs is a perpetual struggle.

Radio was certainly key to Jepsen’s victory. As we often discuss here, the Hot 100 combines several pools of data to determine the biggest hits in the U.S.A., and the two biggest pools are digital song sales and radio audience.

“Call Me Maybe” has had the sales part on lockdown: It’s been America’s best-selling song for a month, racking up weekly sales approaching 300K for four straight weeks. But for three of those weeks, radio airplay was keeping “CMM” out of the Hot 100’s top slot.

Jepsen’s hit was stuck behind Gotye’s improbable megasmash “Somebody That I Used to Know,” which spent eight weeks at No. 1. Radio took a while to catch onto Gotye’s hit (helped by some late-breaking dance mixes that finally convinced them they could power-rotate it). They’re still playing the crap out of Gotye, and that heavy airplay kept “Somebody” atop the big chart through early June, even as its sales weakened.

“Somebody” still commands Billboard‘s Radio Songs chart—the airplay half of the Hot 100 formula. But Jepsen’s song has since moved up to second place on the airplay list. That, plus her continued sales dominance, gave “CMM” the final boost it needed to top the Hot 100 overall. Without radio, she’d probably still be cooling her heels in the runner-up spot.

This radio support is exactly what Jepsen’s pal and mentor Bieber is lacking. For a guy widely considered the world’s biggest pop star—possessor of the most-watched YouTube video of all time, period—the teen-and-tween-beloved Justin has gotten a notably cool reception from U.S. programmers.

When you turn on popular FM radio, your first thought, if you’re over 18, is that you’ve just entered Clearasil-land. With its thumping beats, aggressive deejays and relentless overplay of chart-topping records, hit-music radio (in virtually any format, even country) sounds programmed for twitchy texters with ADD—media for kids.

But programmers don’t actually want kids. Or at least, they don’t want to keep all of them at the expense of losing adults. As long as you’re out of high school and under 50 (well… preferably under 35), radio programmers are actually much more interested in you. If you’re reading this column, I’m going to guess you already know how demographics work in the media industry; surely you’re familiar with the relentless search, by everyone from TV executives to cinema operators, for “18-to-49s.” But it’s worth repeating: Advertisers want disposable-income-havers, and while 15-year-olds are down with the disposable part, they’re not possessed of much income.

So even flame-throwing Top 40 radio wants some college-educated ears. Which means programmers need to hold onto a proportion of the kids, while not actively alienating the income-havers in droves. And it’s well-reported across the Internet that one surefire way to clear a room of adults is to play anything by Justin Bieber, notwithstanding the guy’s obvious talent and way with a pop hook.

All this explains why Justin has yet to score a big radio hit, three years into his march through a million iPod Touches. “One Time,” the 2009 breakthrough single that won Bieber his first couple million fans, never got higher than No. 32 on Billboard‘s Radio Songs chart. “Baby,” the aforementioned YouTube smash from the summer of 2010 featuring rapper Ludacris, never ranked higher at radio than No. 24. Everything else the kid sent to radio did even worse.

On the Hot 100, however, Justin scored a dozen Top 40 hits from 2009 to 2011. As noted above, the Hot 100 balances radio airplay with digital sales; Bieber’s massive sales at iTunes have made up for his weak radio spins. “Baby,” which peaked at No. 5 on the Hot 100 despite its modest airplay, sold nearly four million downloads alone.

Flash forward to 2012: As we speak, Bieber’s label Island Def Jam may finally be getting their boy a top-10 radio record with the single “Boyfriend.” But it’s been an uphill battle. As Billboardreported on its website earlier this month, in an article succinctly titled, “How Island Def Jam Saved Justin Bieber’s ‘Boyfriend’ at Top 40 Radio,” IDJ executives have been wooing programmers intensively to play their highest-priority pop act.

“Boyfriend,” Bieber’s attempt to transition into a grown-n-sexy star, scored a burst of initial, curiosity-driven Top 40 airplay in March; but within weeks it was tumbling off playlists. So the label went back to programmers with piles of research—IDJ pointed to “video views, huge single sales, monster streaming and requests.” With that cajoling (and who knows what other, less press-friendly pressure tactics), spins of “Boyfriend” are back up a couple of months later. As of this writing “Boyfriend” is just outside the Radio Songs top 10, moving up to 11th on Billboard‘s airplay chart, making it Bieber’s biggest hit at U.S. radio.

The trouble for “Boyfriend” is that this airplay is materializing too late—the song peaked at iTunes months ago. Back in the early spring, in its first week, the single racked up an astounding 521,000 downloads, the second-highest digital debut of all time. It was further evidence of Bieber’s megapopularity with his eager fanbase, but to score a chart-topping smash, he’ll need more passive (read: older) fans at the same time.

Syncing up radio and sales has long been a headache for teenpop acts. In the late ’90s, the Backstreet Boys never scored a Hot 100 No. 1. Their biggest radio hits, including the immortal “I Want It That Way,” weren’t released as singles; those that were issued at retail were more popular to their rabid fans than with radio programmers. It’s arguably gotten even harder in the last decade, as teenpop acts have been groomed by gatekeepers such as the Disney Channel, and radio demographic targeting has gotten tighter.

Two out of the last three decades were capped with a teenpop eruption. In 1988-90 we had the New Kids-Debbie Gibson-Tiffany burst; 1997-2000 gave us the BSB-‘N Sync-Britney explosion. We were just about due for another generational boomlet of teenpop on the charts about a half-decade ago. Only this time, it never quite happened.

Disney-groomed stars Miley Cyrus and the Jonas Brothers began storming the album charts as far back as 2006, but radio took a long time to warm to the former and essentially ignored the latter (along with the cast of the smash TV soundtrack to High School Musical). Neither Cyrus nor the Jonases managed a No. 1 hit. Cyrus came within a whisker with “Party in the U.S.A.,” a fluke No. 2 hit that caught on after a half-dozen lower-charting attempts. In the years after 2009, Euro-style dancepop has essentially served as teen music, with a heavy assist from adults who liked Lady Gaga, too.

So here it is 2012, and the current Top 10 is studded with Jepsen’s smash at No. 1; One Direction’s “What Makes You Beautiful” at No. 5, after a No. 4 peak; and “Boyfriend” hanging onto the No. 10 spot, after peaking at No. 2 in late March, the week of its explosive digital debut. (The Wanted’s former No. 3 hit “Glad You Came” is just outside the winners’ circle at No. 11.) Is the teenpop moment of the 20-tweens finally upon us?

Possibly, but it’s a considerably older-leaning teenpop model this time. Jepsen’s hit came armed with a solid dance beat, one capable of sitting on the radio alongside Rihanna. One Direction’s single is notably VH1/adult-contemporary radio-friendly. And Bieber is making his Justin Timberlake-on-Justified maturity maneuver about three years and two albums early. Throw in fun.’s high-school-friendly anthem “We Are Young,” the chart smash of the winter, and you’ve got a new wave of teenpop that’s trying to hold onto the kids and the adults at once.

Both Jepsen and Bieber are on sister labels of the Universal Music Group, and they’re happy for each other’s success. But until Bieber scores an across-the-board, radio-and-iTunes smash to match “Call Me Maybe,” it’s hard to say teenpop is having another dizzy 1999 moment. The success of “CMM,” delightful and deserved as it is for Jepsen, will rank as just another hit by a Queen of Pop, rather than the transitional moment it could be—think Britney dropping “… Baby One More Time” in the closing days of 1998.

Island Def Jam is currently working three followup Bieber singles. If one of them catches on with radio and the public simultaneously and manages to finally bring Bieber to the top of the Hot 100, someone had better text Carson Daly. Tell him to give those tapings of The Voice to someone else and get back to the MTV set to revive TRL—America, improbably, needs him again.