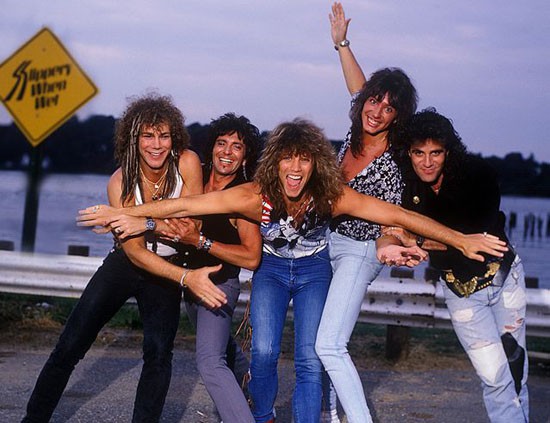 This month, to celebrate the Internet’s unbridled love for wallowing in nostalgia and even greater relishing of talking about why certain cultural artifacts are horrible, Sound of the City presents First Worsts, a series in which our writers remember the first time… they ever hated a song enough to call it The Worst. (And to be fair, we’re also going to see how these songs have stood the test of time.)

Sophomore year of high school, 1986-87, was the worst. I received the first of several rejections by girls I had crushes on. Two Sony Discmen broke on me—they were crazy-fragile back then. Oh, yeah, and my dad lost his job.

As if adding insult to injury, the radio picked that year to turn on me. There are several culprits, but I blame it mostly on Mr. Big Hair and Shit-Eating Grin, my pop-music white whale and fellow half-Italian, Mr. Jon Bongiovi.

As I once described in an edition of my “100 & Single” column, you can break down decades of pop-music history into halves. For example, the ’70s can be divided into the rock-plus-singer/songwriters half and the disco half. Or consider the last decade, the ’00s, which can be divided into a hip-hop half and a dance-pop half. There’s usually a big hit song that signals the new half has begun, the moment when the culture is pivoting from one style to the other.

What I didn’t mention in that column was that the pivot song is, for some music fans, not welcome—especially if you’re the one whose favorite music is being made passé. Imagine you’re a rock fan in 1974, accustomed to your AM station pumping songs from Grand Funk Railroad or Bachman-Turner Overdrive, and then one day your radio blares the Hues Corporation’s “Rock the Boat,” widely considered the first disco No. 1 hit. It might make you dance, but more likely, it might piss you off.

As a teenager in the 1980s, I really enjoyed the new-wave British pop and electro-dance from MTV’s early years. Duran Duran, Prince, Culture Club, Cyndi Lauper, Phil Collins and Tears for Fears were all in heavy rotation in my room. I wasn’t a big hard-rock fan, but I did like a lot of early ’80s pop-metal—Def Leppard’s “Photograph” remains a karaoke favorite to this day (to the detriment of my friends’ ears). I didn’t mind when Van Halen scored their first and only chart-topper in early ’84 with “Jump”—not only because it was a decent pop song, but also because, to reach the Hot 100’s penthouse, they had Eddie momentarily drop his axe for a super-wussy, Kajagoogoo-worthy keyboard.

Things started to turn about a year later, though. There were two strains of big-haired pop in the late ’80s, and I didn’t care for either one. The first was the melismatic, rafter-raising diva, led by Whitney Houston. She scored her first No. 1 hit in late ’85, “Saving All My Love for You.” I liked that song well enough, and its followup, “How Will I Know” (I have since decided that the latter was the very best of her uptempo songs); but by spring ’86 and “Greatest Love of All,” she was beginning to grate on me. Still, in the spring and summer of ’86, we were still getting No. 1 hits like Pet Shop Boys’ “West End Girls” and Peter Gabriel’s “Sledgehammer.” Clearly the big-voiced, big-haired diva wasn’t going to kill Brit-accented pop by herself, and my beloved music wasn’t going down without a fight.

But then the other strain of big-haired, late-’80s pop came crashing in, into my little world. Hair-metal finally killed off Second British Invasion pop on the U.S. charts. I’ve never really forgiven Bon Jovi for it.

Bon Jovi, “Livin’ On A Prayer”

I don’t believe the term “hair metal” was really used widely before Bon Jovi; honestly, I can’t prove that it came into vogue with their success. But it’s inarguable that Bon Jovi were the most important act in the popularization of ’80s hair-metal—and not just because Jon Bon Jovi (fine, I’ll accord the schmuck enough respect to use his revamped stage name) had a pretty mane.

Before “You Give Love a Bad Name” in the fall of 1986, even the poppiest-sounding metal songs were supposed to appeal primarily to boys, peak somewhere in the lower half of the Billboard Top 20, prompt a shit-ton of album sales, and that’s it. Through 1985, you could get through your day as a pop fan encountering relatively little metal. In the entire first half of the 1980s, Van Halen’s “Jump” was the anomaly—the only metal No. 1 hit of any kind. Quiet Riot’s massively popular cover of “Cum on Feel the Noize” stalled at No. 5 in 1983; and such catchy (and, I must say, excellent) pop-metal songs as Ratt’s “Round and Round” or the Scorpions’ “Rock You Like a Hurricane” (both 1984) peaked below the Top 10. Even the MTV-blanketing 1985 smashes by Mötley Crüe, “Smokin’ in the Boys’ Room” and “Home Sweet Home,” couldn’t break into the winners’ circle.

Slippery When Wet, Bon Jovi’s third album (after two attempts to look like dude-rock badasses), changed all that. It spent eight weeks atop the Billboard album chart and spun off three Top 10 hits, including two No. 1s, all firsts for a hard-rock album. Top 40 radio programmers nationwide finally had a brand of metal that appealed primarily to girls and made no bones about it. Where David Lee Roth-era Van Halen would follow up a Top 40-friendly joint like “Jump” with such guy-oriented jams as “I’ll Wait” or “Hot for Teacher,” Jon Bon and his teased-up gang came armed with a disc’s worth of backseat singalongs.

If you doubt Slippery‘s status as pop-metal’s ur-text, feast your eyes on the album’s original cover, an old-school bit of metal softcore boobage that likely would’ve turned off scores of female fans before someone (probably the label, or, apocryphally, Jon Bon himself) thought better of it. By switching to the innocuous finger-scrawl-on-a-wet-Hefty-bag cover for which it is now famous, hair-metal came of age as pop music for everyone.

Everyone except me. I have long called Bon Jovi’s body of work “captain of the football team music.” The sub-Meat Loaf innuendos, the weight-room-ready buff-rock: This was music for the winners in school, the kids who assumed popularity and beauty were their birthright. It was all there in Jon Bon’s self-satisfied smirk and pointed finger.

In the fall of 1986, as my local pop stations began power-rotating “You Give Love a Bad Name” and the song kept scaling the Hot 100, I was aghast. This isn’t supposed to happen, I thought. These songs were supposed to peter out below the Top 10. Pop radio existed so I wouldn’t have to hear crap like Bon Jovi.

It was a kind of pre-alternative-rock pop snobbery on my part, an elitism borne of the particular era of Top 40 in which I happened to come of age. It was too depressing to contemplate that an era that had peaked in 1983-84 with a fusillade of great, colorful pop—the Human League! peak Michael Jackson! Eurythmics! hell, even Dexy’s Midnight Runners!—was coming to an end. You would think that my love of fairly androgynous music would make me appreciate metal that was more girl-friendly. Rather, I think I regarded Bon Jovi as a kind of Trojan horse for retrograde bro-rock; it was only pretending to be sensitive, and it certainly wasn’t conceived for sexless losers like me.

One time, during a sophomore-year class where a teacher was showing us a movie and trying to get the school’s projection TV to work, he momentarily got the VCR’s tuner stuck on MTV, which was playing a Bon Jovi video. When the teacher finally figured out how to start the video and the BJ video disappeared, the class whined—a popular girl cried out, “No! Mr. Vanasse, could you put that back? Bon Jovi is totallymy favorite group, like, ever.” Figures, I grumbled to myself, with loathing in my nerdy, never-been-kissed, Peter Gabriel-worshipping heart.

My annoyance turned to disgust when “You Give Love a Bad Name” gave way to fellow chart-topper “Livin’ on a Prayer”: Wait, now they want the Springsteen fans, too?!Letting John (Cougar) Mellencamp ride on Bruce’s heartland-cred coattails was one thing, but Bon Jovi as working man’s music—embedded in flaccid talk-box effects and cheap minor-key dramatics—was just too much to stomach.

In their argument-starting 1991 book The Worst Rock n’ Roll Records of All Time, critics Jimmy Guterman and Owen O’Donnell put it best in their writeup on Slippery (ranked No. 26 on their worst list). They reserved particular scorn for Jon Bon as proletariat poet: “[It’s] bizarre that the three megahit singles from Slippery When Wet were taken to reflect Jon’s newfound ability to be a spokesman for a generation of young, working-class kids. Maybe since Bruce Springsteen was ensconced in one of his epic studio hibernations when Slippery When Wet came out, and the rock audience they had to get some salt-of-the-earth wisdom from a New Jersey guitarist, Jon got the post by default… ‘Livin’ on a Prayer’ tries to be an anthem for kids in trouble, but… if ‘it doesn’t really matter if we make it or not,’ why does the narrator suggest they try?”

What was weird about my hatred of Bon Jovi, at the time, was how much it was just about them—they symbolized something loathsome for me, but they didn’t make me hate hair-metal broadly. After 1986, I came to love about half the singles by Poison and Cinderella, virtually all of Def Leppard’s Hysteria, bits of Whitesnake (Whitesnake!) and, of course, the vast majority of the output of Guns n’ Roses; even my wussy, un-metal self could recognize Axl’s and Slash’s skill with a tune. What was even better about GnR is they rendered Bon Jovi fluffy by comparison.

By college, Bon Jovi wasn’t much of a bête noire anymore. Still, I took great pleasure when their 1992 grunge-era album Keep the Faith belly-flopped on the charts, consigned to the same post-Cobain uncoolness bin as Winger and Slaughter.

SO HOW IS IT NOW?
I have come around on bits of Bon Jovi’s legacy, but not enough to redeem them. “Wanted Dead or Alive” is so riddled with cliché I must confess that it tickles me; “I’ve seen a million faces/And I’ve rocked them all” pushes past bad somewhere into good territory, just behind the border of bad again. Even back in the day, I really liked the heartfelt “Born to Be My Baby” from their 1988 album New Jersey—talk about your pandering titles—but the rest of that disc is the same thuddingly obvious junk (thanks but I’ll pass, “Bad Medicine”).

If I have retroactively come around on anything viz. my ’80s music snobbery, it’s my realization that many metal fans regarded themselves as social outcasts, too. The testimonials of alienation I’ve since read from, say, old-school Judas Priest fans has convinced me that we were all pretty emo in the ’80s, regardless of what sub-subclass we assigned ourselves in the lunchroom. I’m not quite convinced, however, that Bon Jovi fans ever felt like outcasts.

I continue to be gobsmacked at how Bon Jovi’s music will never die—the cruelest irony for me is how well they do touring England and across Europe. A quarter-century later, the songs from Slippery When Wet still haunt me. My friends all know me as a shameless pop fan who loves dancing at weddings and singing at karaoke bars. But it remains alienating for me when “Livin’ on a Prayer” comes blaring out of the speakers, and scores of 30- and 40somethings race to the dancefloor or lunge for the microphone—and there I am, sulking in my seat.