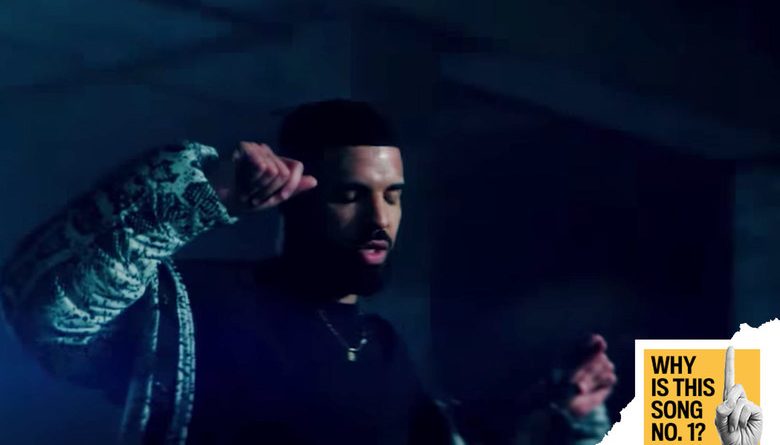 With his latest No. 1, the rapper takes a page from Justin Bieber and breaks another record.

Now, where was I? Eleven weeks ago, in the closing paragraph of my “Why Is This Song No. 1?” article about “God’s Plan”—Drake’s previous chart topper and the song he himself ejects from Billboard’s penthouse this week—I offered the 6 God some unsolicited advice: “[O]ne wonders what challenges remain for him. … Maybe the last frontier for Drake is a total stadium-rocker, a track so grandiloquent everyone from SoundCloud rappers to Grammy voters would find it undeniable.” I’m not saying I’m an A&R guy, or that Drizzy paid any attention to me. But check it: “Nice for What,” the Drake track that takes over Billboard’s No. 1 spot, is exactly the undeniable, all-quadrants banger Wheelchair Jimmy needed at this stage of the game, his most irresistible jam since “Hotline Bling” three years ago.

“Nice for What” is infectious for all sorts of very Drake-like reasons. Being the swag vampire he is—arguably this decade’s Madonna—Drake is expert at copping catchy, zeitgeisty pop trends and adapting them to his own ends. “Nice” is essentially a single-length homage to New Orleans and its native bounce music, a connection made plain by the very first voice you hear on it: bounce queen Big Freedia, who rallies the crowd with the shoutout, “I wanna know who mothafuckin’ representin’ in here tonight!!” Seconds later, Drake’s very first bars are also a NOLA shoutout: “Everybody get your mothafuckin’ roll on” is an allusion to “Get Your Roll On” from New Orleans rappers Big Tymers. Before the song is over, Drake has dropped allusions to Fabo, frontman for Southern snap-music titans D4L, and slipped in a single line (“Watch the breakdown!”) from Letitia Wright of Black Panther fame. The artist borrows from the best.

But all of these allusions take a back seat to the song’s most prominent inspiration. This artist might just be hip-hop’s greatest guiding spirit … well, this month, anyway. No, not Migos or Kendrick or even Cardi B. I’m talking about Lauryn Hill.

Hill—the Ralph Ellison of hip-hop, an undisputed rap-and-B legend with only a single solo studio album to her name—hasn’t released so much as a live album in 16 years. Yet she is weirdly all over the place right now. She killed it on last weekend’s Rock and Roll Hall of Fame induction ceremony, belting out a tribute to inductee Nina Simone. Within days of that performance, striking while the iron was hot, Hill announced a 20th-anniversary tour behind that one legendary solo album, 1998’s The Miseducation of Lauryn Hill. Earlier in the month, Ann Powers’ vital feminist NPR Music project “Turning the Tables,” which proposes a new canon of albums made by women, placed Miseducation third in a new readers’ poll after it ranked second in the critics’ poll last summer—the only title giving Joni Mitchell’s Blue a serious run for its money.

But perhaps the clearest evidence that L-Boogie is coursing through hip-hop’s bloodstream is that her music forms the backbone of current hits by both Drake and Cardi B. Crazier still: They’ve both tapped the same song. That would be “Ex-Factor,” the aching neo-soul ballad that was Hill’s second single from Miseducation back in late 1998. On “Nice for What,” Drake and his producer, fellow Ontario native Murda Beatz, pull the vintage-Kanye trick of building a track around a sped-up R&B sample: Hill’s mantralike, song-closing hook—“Care for me, care for me/ I know you care for me/ There for me, there for me/ Said you’d be there for me …”—serves as “Nice’s” hypnotic, head-bobbing sound bed.

Thanks to Drake’s prominent sample, Hill and her “Ex-Factor” co-writers have credits on a new No. 1 hit—Hill’s first since her own “Doo Wop (That Thing)” topped the Hot 100 two decades ago. (Hilariously, those writing credits now encompass three layers of sampling: not just Hill, but also all nine members of the Wu-Tang Clan, whose “Can It Be All So Simple” was sampled on “Ex-Factor,” and the writers of “The Way We Were”—pop-standard veterans Alan and Marilyn Bergman and Marvin Hamlisch—because the Wu track, in turn, sampled a Gladys Knight and the Pips cover of the Barbra Streisand chestnut. Phew.) All of these same credits also appear in the fine print of “Be Careful,” the Cardi B single that she performed while revealing her pregnancy on Saturday Night Live two weekends ago. “Be Careful,” currently at No. 11 on the Hot 100 and rising, interpolates the exact same line from Hill’s hit (resung, not sampled) and serves as an echo of Cardi’s own vulnerability on the track.

That’s not the only way the two songs differ in their deployment of the former Fugee. Obviously, there’s tempo: Team Drake has turned Hill’s hook into an uptempo jam while Cardi’s track wallows in the original tune’s melancholia—a reminder that sampling is an art form with no preset outcome. But the Hill song also provides an additional layer of metatextual meaning to both tracks. Cardi’s sample is a one-rap-queen-to-another show of respect. Famously, last fall, when her “Bodak Yellow” topped the Hot 100, Cardi became the first solo, unaccompanied female rapper since Hill to top the pop chart—the only two such artists in Hot 100 history. The sample is a knowing nod to her forebears.

And Drake? He’s getting something else entirely out of “Ex-Factor”: some feminist cred. Because “Nice for What” is more than a club banger. It’s the un–“Hotline Bling”: a chance for Drake, three years after his most critically acclaimed but also most criticized crossover pop hit, to do a 180 on that hit’s grumbly misogyny and give a formal shoutout to the ladies.

Lest you doubt his intention, the song’s video makes it plain: Drake is not the star. The glossy, cinematic clip showcases about a dozen and a half female actors, athletes, singers, and models, including such luminaries as Issa Rae, Tiffany Haddish, Rashida Jones, Olivia Wilde, Zoe Saldana, the aforementioned Letitia Wright, and prima ballerina Misty Copeland. Black-ish TV star Tracee Ellis Ross was so flattered to be texted by Drake and invited to appear that she put on a slinky silver jumpsuit and did some fearless mom-dancing for the camera. Drake does appear in the clip, doing a variation of his “Hotline” dad-dancing in a darkened club, but he’s on screen for less than 30 seconds of “Nice’s” four-plus minutes. In spirit, the mostly ladies, #squad-driven video is a blend of two prior buzzworthy clips, both No. 1 hits that came out in 2015: Taylor Swift’s “Bad Blood,” which attempted to square the song’s spitefulness with a parade of brand-serving famous female friends, and Justin Bieber’s “Sorry,” the dancefloor-filling mea culpa in which the Biebs made a statement by showcasing a parade of unfamous dancers and not appearing in the clip at all. Unlike both of these clips, “Nice for What” is directed by a woman, 22-year-old Karena Evans, who also lensed Drake’s buzzy “God’s Plan” clip—a video that made headlines in February for its socially aware conceit of giving away $1 million.

The “Nice” video dropped simultaneously with the song’s release, which is notable, because the “God’s” video debuted weeks after that song reached No. 1. It’s plausible that “Nice” could have reached No. 1 on the big chart without its video: “God’s” debuted at No. 1 on the Hot 100 with nothing more than an audio drop on both streaming services and YouTube. But the video didn’t hurt: In a Drake vs. Drake matchup, “Nice” also managed to debut atop the big chart. He not only joins the club of acts who have replaced themselves on top—a once-illustrious feat that is getting more common all the time—he becomes the first artist to replace himself with back-to-back No. 1 debuts. In large part, “Nice” managed to eject “God’s” by getting a fast start in the old Hot 100 metrics of airplay and sales—particularly at radio, where it opened to an instant 31 million in audience. “God’s Plan” didn’t even make the Radio Songs chart in its debut week, reinforcing that “Nice” has the makings of a bigger old-school hit. As for streaming, the big driver of the chart, Billboard reports that “Nice” debuted with total U.S. streams of 60 million—not nearly as big a record-setter out of the box as “God’s,” which ranged from 75 million to 101 million streams per week in its first month, but 60 million is a blockbuster streaming number by any other yardstick but Drake’s. In any case, whatever the data breakdown, it’s clear Drake wanted “Nice for What” to arrive with both music and visuals, a fully packaged message.

Which is what, exactly? What made feminist commentators take Drake to task for “Hotline Bling” back in 2015 was his condescending moralism about what it takes to be a “good girl.” “Nice for What” reads as a very Aubrey Graham–esque corrective, admiring the object of his gaze for her self-sufficiency while still gazing at her: “I’ve been peepin’ what you bringin’ to the table/ Workin’ hard, girl, everything paid for/ First-last, phone bill, car note, cable.” He praises her willingness to think about more than social media (“Without a follow, without a mention”). This is … still a little patronizing, and not exactly remarkable, 17 years after Destiny’s Child sang about what a woman’s money could buy on “Independent Women.” But it is broadly relatable, as is the song’s refrain: “You really pipin’ up on these n—-s/You gotta be nice, for what, to these n—-s?” It is not hard to imagine a club full of women as fired up by that chorus as they were about Cardi B’s bloody shoes last fall. Couple this with the Lauryn Hill sample and the video chockablock with strong (and, of course, beautiful and famous) women, and it’s either a savvy or a cynical #MeToo-era bandwagon to leap onto.

But then, cultural savvy has been Drake’s game all decade. Did he even need the mainstream-friendly, purportedly feminist club banger? He seems to know what the marketplace wants at every turn. When “God’s Plan” rang the bell in late January, it looked like a phoned-in move by the pop game’s biggest artist. By dropping just two tracks, a meandering single and an even more rambling B-side, Drake was satisfying the market’s demand for Drake while still keeping supply scarce. But as Billboard’s Andrew Unterberger smartly pointed out after the song sailed past 10 weeks atop the Hot 100, the loping “God’s” turned out to be a much stickier hit than anticipated by us olds, who like our songs with things like choruses and hooks and committed vocal performances. Unterberger called out the critics who downplayed “God’s” and posited that the track is the Sound of Pop Now, a streaming-era rap cut less about the hooks or even the bars than the atmosphere.

Time will tell. I would counter that “God’s Plan” might wind up being the “Boom Boom Pow” of 2018: an overperforming album teaser (that Black Eyed Peas smash spent 12 weeks at No. 1) whose legacy is eclipsed by its follow-up (“I Gotta Feeling,” No. 1 for 14 weeks and, however schlocky and obnoxious, clearly the Peas’ jam for the ages). “Nice for What” is critically acclaimed, breaking on the radio, already on top of the Hot 100 in an unseasonably chilly April and primed for summer. And to think that last summer many were writing Drake’s chart epitaph when he fell off the Hot 100 for the first time in eight years. That looks like a speed bump now. All imperial phases eventually come to an end: Taylor Swift once looked indomitable, until the radio abandoned her a few months ago. But for now, it’s still too soon to call Drake an ex-factor.