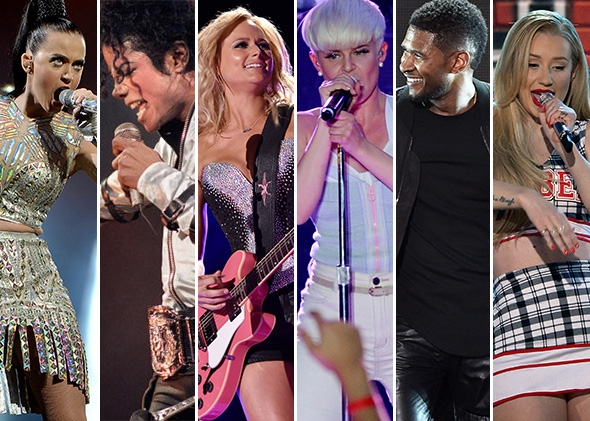 The “Song of the Summer” is an old concept but a fairly new sport. Pop artists since the ’60s have on occasion tried to score a self-conscious summer smash—but the media only began studying the horserace a decade or two ago. We’re barely into June, and already several outlets have offered predictions for 2014.

But when it comes to the Song of the Summer, your happy memories are what matter. Say you have a vivid recollection of summer 2004. Maybe it was the one between high school and college, or the year you worked that crazy job. The charts that year were dominated by Usher, but if the song booming from your car all summer long was by Modest Mouse? Then the latter is your Song of the Summer, period.

So if we’re going to give you a prediction that matters, we should identify what your Song of the Summer will be.

What follows is a walk down memory lane in the form of a quiz: 10 yearly Song of the Summer matchups with four choices each. The choices are dominated by each summer’s respective chart-toppers, but in a few cases we’ve swapped in a well-remembered rock, hip-hop, or indie hit to add some variety.

Once you’ve made your choices, our SummerSongBot™ will spit back a 2014-era jam that might just wind up topping your own personal hit parade. You’ll find a complete list of the possible results below the quiz.

Potential Songs of the Summer, 2014

Iggy Azalea featuring Charli XCX, “Fancy.” The current No. 1 song on the Hot 100, by the fast-rising female, white, Australian rapper, who gets a major assist from the hook-purveyor from last year’s Icona Pop jam “I Love It.” (Buy this song.)

Jason Derulo featuring Snoop Dogg, “Wiggle.” The latest minimalist trap-pop jam from a remarkably resilient hitmaker (since 2009) who’s coming off the winter hit “Talk Dirty” and this time is backed by prior summer-song-supporter Snoop. (Buy this song.)

Ariana Grande featuring Iggy Azalea, “Problem.” On this horn-inflected urban-pop jam, the rising starlet behind 2013’s “The Way” is backed by the omnipresent rapper; it’s currently a Hot 100 No. 2, held off by Iggy’s other hit “Fancy.” (Buy this song.)

Calvin Harris, “Summer.” This hit by the formerly invisible Scottish DJ/producer is the latest to feature his vocals—he manned the boards behind Rihanna on “We Found Love” and Florence Welch on “Sweet Nothing” but sung his own “Feel So Close” in 2012. (Buy this song.)

Miranda Lambert featuring Carrie Underwood, “Somethin’ Bad.” Country’s answer to “No More Tears” or “Telephone”—a summit by a pair of reigning queens teaming for the first time—this rocking song is closer to Mutt Lange than Ole Opry. (Buy this song.)

Michael Jackson, “Love Never Felt So Good.” This reanimated 1983 song, penned by Paul Anka and sung by Jackson during the Thriller era, was lovingly rebuilt by producer Timbaland for the Xscape project; one version features vocals by Justin Timberlake. (Buy this song.)

Kongos, “Come with Me Now.” This odd, three-year-old, lurching accordion-inflected rock song by a South African band just crossed to U.S. radio this year—it topped Billboard’s Alternative chart in the spring and is now getting picked up by top 40 radio. (Buy this song.)

Nicki Minaj, “Pills n Potions.” The new single from the rapper/Idol judge/pop-culture phenom with a strong summer-hit track record; its tempo, framed by a mantra-like “I still love” refrain, is ballad-like, offset by more aggressive rap verses. (Buy this song.)

Nico & Vinz, “Am I Wrong.” This shimmering midtempo pop tune with African flavors is already in Billboard’s top 10. It’s performed by the Norwegian duo formerly known as Envy and has the unorthodox infectiousness of Gotye. (Buy this song.)

MAGIC!, “Rude.” For all you Ras Trents out there, here’s a white-boy-reggae smash by a Canadian band, about a guy trying to get past his intended’s intransigent dad; as if that lyrical trope weren’t enough like “Two Princes,” lead singer/producer Nasri wears a knit cap. (Buy this song.)

Katy Perry, “Birthday.” Here’s the latest from the irrepressible hitmaker who’s brought us several hot-weather dominators but hasn’t had an undeniable summer hit since 2011’s “Last Friday Night”; given its title, Perry appears to want that sweet, sweet publishing-perennial dollar. (Buy this song.)

Robyn & Röyksopp, “Do It Again.” This thumping, buzzing electro-club song is the title track from an imminent album by the Swedish goddess of indie-pop teaming with the Norwegian ambient duo who’ve been together since EDM was “electronica.” (Buy this song.)

Ed Sheeran, “Sing.” This Pharrell-produced hit—not Timberlake, but a remarkable facsimile—is an acoustic guitar–plus–dance beats–plus-falsetto jam from the U.K. singer-songwriter leaping from his prior delicate ballads to the top 40 brass ring. (Buy this song.)

Sam Smith, “Stay with Me.” A potent piano ballad and breakthrough solo hit from an operatic-voiced Brit (“the male Adele”), who was introduced to U.S. audiences via SNL and his guest vocals on two prior dance-pop hits (one, “Latch,” is also rising at pop radio).

DJ Snake & Lil Jon, “Turn Down for What.” On this trap-dance smash and unlikely comeback hit from the mid-’00s crunk godfather/Dave Chappelle parody subject, Lil Jon cannily teams with a French electro DJ to score his first Top 10 hit in five years. (Buy this song.)

Usher, “Good Kisser.” This sweaty, syncopated, boudoir-ready, and acclaimed single by the now-veteran (20 years!) R&B crooner with the killer falsetto has been slow to catch on at pop radio, but it’s now rising into the R&B radio Top 10—they know what’s up. (Buy this song.)