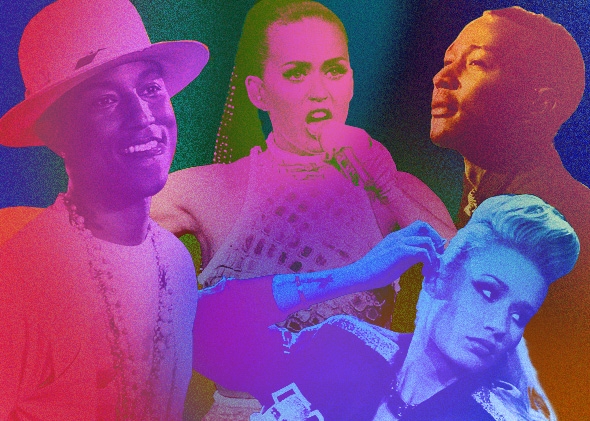 Entry 4: The bad news: Artist “loyalty” is over. The good news: Hits are as varied as ever.

Happy holidays—another round of shots for us all! Thanks for letting me run this lap with you. I’m hoping to be the Nicki Minaj to your collective Queen Bey—maybe not flawless but good enough in my one-off appearance to warrant remix immortality. You’ve already given me plenty to work with.

Last thing first: Ann kicked it to me with a question about Katy Perry’s mystifyingly massive “Dark Horse.” (The No. 2 song of the year behind “Happy,” according to Billboard. Take that, Taylor.) As I said in February, the basic answer to why it’s so huge is that “spooky EDM goth goddess”  (cf. 2011’s “E.T.”) is Perry’s most underrated commercial mode. It’s actually a more consistently successful style than her shiny–cheerleader mode or her lewd–party-girl mode. Like so many hits today, fans made it a hit before the industry caught on, voting to give the song an early release before the label knew it had hit potential. Love it or hate it (I’m somewhere in the middle), you can’t call its success anything but populist.

The bad news for the only-30-year-old Perry is that, in this year dominated by female newcomers, she’s found herself reclassified as an elder stateswoman and was a little off her game. She wasn’t a part of that late-year run of all-gal chart command you all cited. (Average age of those ladies: 24.) Moreover, “Dark Horse” has wildly outperformed the rest of Katy’s recent body of work—late 2013’s Prism generated just two No. 1 hits total (“Horse” and “Roar”) and no other Top 10s, a surprisingly low batting average for her. (Lindsay, you like “Birthday” better than America did; it stalled at No. 17.)

I bring up Perry’s uneven résumé in 2014 to make a larger point about the shape of pop careers this year. Did I say “career”? In 2014, more than ever, big hits felt like one-offs. Carl dubbed this the Year of the Rookie, and I’d agree, but maybe not in the way he intended. If Katy Perry can’t go back to radio, iTunes, and YouTube after a smash hit and expect a warm reception, well, all pop stars are rookies now.

To illustrate this, allow me to try something a bit novel this year and drop a new kind of Top 10 list. “Dark Horse” was one of 10 songs that topped Billboard’s Hot 100 in 2014. That’s a nice round number, and since I don’t expect anything to eject “Blank Space” from No. 1 before the new year, these songs form a natural Top 10. These aren’t my favorite 10 songs of the year overall (I’ll list those later), but here’s how I rank the songs that commanded the Hot 100 this year:

So why focus on these smasheroos? Besides getting in one last dig at 2014’s worst hit, I want to use this list as a window into our nation’s musical predilections circa 2014. It was a just-OK year hits-wise; after a very entertaining 2012—the year of Carly Rae and Gotye and Fun—in both 2013 and 2014 the radio has been dominated by some fairly hokey songs. Nowhere was this in greater evidence than this year’s drag of a contest for the Song of the Summer, an Iggy v. Magic two-hit race so lame it might have convinced chart watchers to turn their eyes back to actual sports.

More pertinent to our discussion here, most of these chart-toppers wound up being flashes in the pan—Katy Perry wasn’t alone. To be exact, six of them were from artists who failed to produce another Top 10 hit in 2014. Ann wasn’t kidding about Pharrell’s moment of glory being short-lived; both he and John Legend, after scoring their first-ever No. 1s, went right back to falling short. The same was true for Eminem after “The Monster” and Pitbull after “Timber.” The worst performance of all was from Magic: None of its follow-ups have charted on the entire Hot 100. (The exceptions to the no-repeats rule were all ladies: Taylor, of course; Iggy Azalea, who came back with “Black Widow”; and, surprisingly, Meghan Trainor, whose perky follow-up to “All About That Bass” just broke into the Top 10 this week.)

This 60-percent failure rate is high—I haven’t done a full data mining, but in all my years of chart watching, I’m not sure I’ve ever seen anything like it. To pick a couple of years at random, in 1984 (everybody’s favorite year for hits) only 30 percent of No. 1s weren’t followed up by a Top 10; in 1989 (the Year That Begat Taylor) only 21 percent suffered that fate. Closer to the present, in 2010 literally every No. 1 hit generated a Top 10 follow-up.

What’s the cause of America’s newfound one-and-done mentality? I could probably include this sentence in more than half the articles I write, but: It’s the data, stupid. There’s now more and better data than ever before getting baked into Billboard’s flagship pop charts, the Hot 100 and—as of this month—the Billboard 200 album chart. For the past couple of years, the Hot 100 has included not just what radio foists on us but precise data on the songs we buy, the songs we stream, the songs we YouTube. And what this data reveals about us isn’t always pretty: It turns out we are fickle. Artist “loyalty”? That’s a 20th-century concept, friend.

As I discussed a year ago here in the Music Club and more pointedly on Slate’s Culture Gabfest, this aggregation of more precise digital data is how we wound up with a Hot 100 topped by no black artists for all of 2013. It’s also what’s ruined Billboard’s R&B/Hip-Hop chart—measure our true hearts, and as a nation we drift toward black sounds coming from white faces (not unlike the other racial biases in our society uncovered by data). I’d also argue, somewhat more positively, that this data depth is how we keep winding up with a Hot 100 commanded by women. However—to address what Lindsay and Ann were discussing—I’m not sure we’ll be living in a post-feminist pop world as long as so many of these Hot 100–commanding songs present artists as shiny objects as much as musicians: Many of the half-dozen songs that locked down the Hot 100 this fall—“Anaconda,” “Habits (Stay High),” “Black Widow,” and “Bang Bang”—derived large chunks of their chart points from YouTube. Have you heard? Americans like gawping at attractive pop stars.

But rather than focus only on what was depressing about 2014 pop, let’s exult in one aspect of that list of 10 No. 1 songs: what variety! None of the big hits was sonically similar to the others. The closest any of them come to each other are the two retro-perky hits that followed “Happy” to the top—Swift’s “Shake It Off” and Trainor’s “Bass”—but even then those three songs all drew on completely different pop/rock eras. As for the rest of this year’s No. 1s, each is a cross-genre hybrid, with remarkably little overlap: Pitbull’s club-country fusion, Azalea’s electro-rap, Magic’s bro-reggae, Perry’s trap-pop, Legend’s torch-soul. In short, before you rant about the good old days and what’s wrong with music today, let’s acknowledge that 2014’s biggest songs didn’t have the sameness of the doo-woppy late ’50s, the discofied late ’70s, the all-hip-hop early ’00s, or the thumping EDM-pop of 2010–11. Within the constraints of radio-ready pop, it was a wide-ranging year.

Indeed, you can view the year in pop as a rejoinder to a much-shared piece in November’s Atlantic by senior editor Derek Thompson, which attempted to explain the nature of current pop tastes. Did you guys read it? The piece, “The Shazam Effect,” is worth your time for Thompson’s deep industry research—he explores how data from Shazam to Spotify is mined to turn viral obsessions into radio hits, and how, as I would put it, our winner-take-all pop economy makes big hits bigger. But I took issue with his conclusion. Thompson is no doubt tapping into the frustration of any music lover older than 30 when he writes, “And not only are we hearing the same hits with greater frequency, but the hits themselves sound increasingly alike.” This is the moment where his argument fell apart for me. He’s conflating two separate phenomena—excessive radio repetition, which is totally real and getting worse, and the composition of the hits themselves, which … well, Mr. Thompson, the above list of 10 chart-toppers is my Exhibit A. Where’s the sameness?

Why do arguments about why the radio is so numbingly repetitive always devolve into declinist arguments about pop itself? From Tinashe’s “2 On” and Usher’s “Good Kisser” to Swift’s “Blank Space” and Paramore’s “Ain’t It Fun,” this year’s best hits played with form, broadened the radio palette, and were ripe to be shared, analyzed, and loved in social settings: sometimes implicitly, sometimes explicitly. As Carl wrote in his seminal book Let’s Talk About Love (Out in a great new reissue! Perfect last-minute stocking-stuffer!), “I don’t see the advantage in holding yourself above things; down on the surface is where the action is, the first layer of the unfathomable depths.” And Carl wrote that a couple of years before Spotify—music fans can now send waves through both the surface and the depths through their listening. If you’re complaining about the sound of popular music but not streaming or sharing music you think is better, you’re not helping.

This, to me, is what it means to be a poptimist—a cheesy, squicky term that, like our president with the name Obamacare, I’ve gone from shuddering at to embracing, the better to defy the trifling attacks of anti-populists. (We fended off many this year.) The point of the poptimist mindset isn’t to hate on rock; my own top 10 albums list, below, has plenty of the stuff. It isn’t just to find innovation in mass-appeal music, to embrace pop for pop’s sake, or to question the idea that rock is normative, though all that is part of it. The key for me is the “optimist” part of the term, which is about hope, that the general public gets it right, which they do, often enough. It’s the idea that if we want better music to permeate our lives, then—to borrow a term the president actually did popularize—we are the ones we’ve been waiting for. (And I say this as a guy who was aghast that the public this summer chose “Rude.”)

There’s so much else I didn’t get to cover … Ann, so right about Miranda Lambert! Carl, I know, Robin Thicke made himself impossible to defend with Paula, never mind this year’s big, narrative-complicating reveal that he didn’t write a note of “Blurred Lines”! But that’s quite enough from me and my stack of Joel Whitburn books. I leave you three to your other guest commentators, offering my top albums and actual top singles of the year, below. For my top 2014 disc (what a quaint term), I’m sticking with the album I played more than any this year. (Like Ann said, Annie Clark is indomitable.) Though I must say, after playing D’Angelo and the Vanguard’s Black Messiah 10 times straight overnight, I was sorely tempted to make it my No. 1. For now, let’s regard this year’s December surprise as a miraculous holiday present. And, perhaps, a national balm: Maybe Black Messiah won’t sell a Taylor-sized million copies in its debut, but is it too much to hope this soul-deep D’Angelo record, deployed into Cleveland and Ferguson, might do just a little to help bring our nation together?

See all of Slate’s coverage of the best culture of 2014 here.