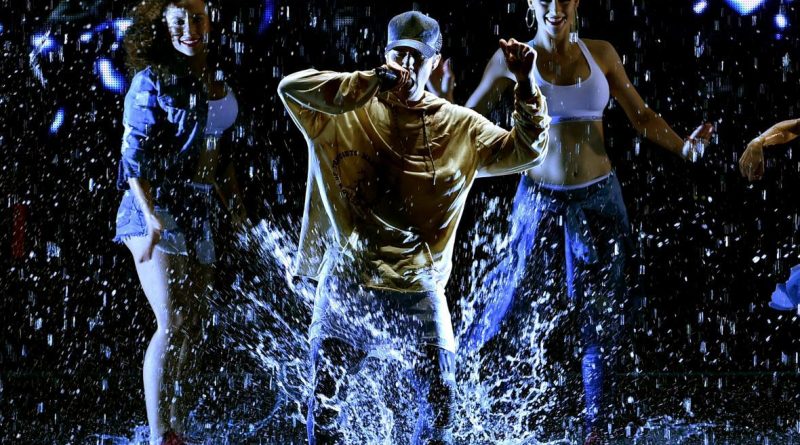 The pop star is deeply repentant for the grievous offense he caused us. He acknowledges that he behaved badly. If you were offended, he wants to offer you—all of you, the whole nation, really—a heartfelt apology. Here, he’s even captured his plea in melodic form, for posterity, expressing sincere remorse and a pledge to do better next time.

This is basically the premise of “Sorry” by Justin Bieber, now in its second week at No. 1 on Billboard’s Hot 100, and America’s first new chart-topper of 2016. On the surface, “Sorry” is an all-purpose entreaty for a wronged lover’s return. In a way, it’s a mirror image of the song it replaced at No. 1, Adele’s similarly apologetic, single-word-titled “Hello.” (Remember, she too was “sorry, for everything that [she’s] done.”) But from the moment it landed this past fall, “Sorry” played—to pretty much anyone who’s seen a tabloid or entertainment website in the last three years—as a whistlestop on the 2015 Justin Bieber Career Rehabilitation Campaign. After offending everyone from Miami law enforcement to global archeologists to nudists since turning 18, Bieber, along with his management, seems determined to make the star’s penitence clear enough to see from space. If last year’s Friars Club Roast–cum–act of contrition or judiciously jerked tears at the MTV Video Music Awards were too subtle for you, here’s a song with the apology right in the title.

The damnedest thing of all this is, this naked beg for America’s affection has totally worked, maybe even better than planned. The Biebs is, by some measures, now more popular than he’s ever been. Worse, if you are a Bieber-hater, my duty as a pop critic obligates me to inform you: “Sorry” is an excellent piece of pop songcraft, the kid’s third straight first-rate hit single. It’s the No. 1 song in America because it deserves to be.

Perhaps it would help if you watched the music video. The big plus, for those of you for whom the sight of Justin’s face provokes a Pavlovian reaction: There’s no Bieber in it. What it features instead is a troupe of vigorous, nimble, and charismatic female dancers from New Zealand. This was a savvy move for several reasons, even beyond the ladies’ athleticism and winning personalities. Their moves underscore the infectious, kinetic energy at the heart of the song, which at root is made for dancing. Clearly, the video is casting some kind of spell—at this writing, its YouTube/Vevo viewing total is approaching 700 million views, the most of any recent Justin Bieber video.

Speaking of data, it should be noted that Bieber really sweated for this hit. Team Bieber selected late October to release “Sorry,” not realizing they were about to run headlong into a buzzsaw named Adele. “Sorry” wound up dropping the same week as her “Hello,” and in the face of the latter’s record-setting sales-and-streaming launch, it debuted on the Hot 100 at a distant No. 2. Asked to comment upon the tough chart competition that week, an unidentified member of Team Bieber (bet you anything it was the kid’s devoted manager Scooter Braun) told Billboard, “Fucking Adele.”

Talk about never-say-never, though—Bieber’s “Sorry” clung to the chart’s upper reaches like a barnacle on the hull of a mighty ship. “Hello” spent 10 weeks at No. 1, and for eight of those weeks, “Sorry” sat at No. 2 (the last seven weeks consecutively) before finally toppling Adele. This is extraordinarily rare. According to Billboard, Bieber’s patient eight-week wait with “Sorry” ties the record for the longest stay at No. 2 for an eventual No. 1 record. (In 2004, OutKast’s “The Way You Move” spent the same number of weeks behind a No. 1—in the hip-hop duo’s case, their own hit “Hey Ya!”—before hitting the top.) If nothing else, this uncommon chart feat signals that a song has genuinely connected with the public; Scooter Braun’s minions couldn’t manufacture sticky, persistent longevity like that.

And that isn’t even Bieber’s only major chart achievement—while Adele was grabbing headlines with her blockbuster album and its one big hit, Bieber was quietly flooding the zone. The week his album Purpose dropped in mid-November, virtually every song on it amassed enough fan streaming activity to make the Hot 100. With 17 simultaneous chart hits in a single week in early December, Bieber set a new all-time Hot 100 record, beating a 51-year-old mark by the Beatles, who charted 14 hits in a week at the 1964 height of Beatlemania. This record might be a Belieber-driven fluke, only possible in this age of Spotify. But his other chart coup is, in a way, even more impressive: For nine weeks running, he’s had three songs in the Top 10: his old hit “What Do You Mean?”, current hit “Sorry,” and rising hit “Love Yourself.” Most of those weeks, the three songs have placed in the Top Five, another Beatles-like level of dominance. You need a steady barrage of sales, streaming and airplay to chart that high with that many songs for that long.

In short, in a seven-year stretch of wild popularity, Justin Bieber has never actually been this popular, at least as a hit-song generator. As I chronicled in my “What Do You Mean?” piece, for years, even as Bieber consistently sold truckloads of albums to kids, he fought longstanding resistance by radio programmers. Bieber may be the Leonardo DiCaprio of pop acts —a star whom a certain segment of the public will always have a hard time accepting as a man—but with “Sorry,” it’s now pretty safe to say his boy-to-man transition is, if not complete, at least legitimate. He’s scoring for-real hits with adults now.

He’s also scoring with tastemakers. In the just-published 2015 edition of the annual Village Voice Pazz & Jop poll of hundreds of music critics, three Bieber songs place within the poll’s top 40: “Where Are Ü Now” (the innovative Skrillex and Diplo hit featuring Bieber), “What Do You Mean?”, and “Sorry.” The only artist to place higher in the poll with a trio of singles is Kendrick Lamar. The critics are responding not just to the Bieber songs’ alluring melodies but to their inspired production. Electronic-music luminary Skrillex coproduced two of the three singles, “Where Are Ü Now” and “Sorry,” and he very creatively manipulates Bieber’s voice like Silly Putty. After pitch-shifting it into a flutelike trill on “Where Are Ü Now,” on “Sorry,” Skrillex and coproducer Michael “Blood” Tucker build the song’s best melodic hook out of a vocal chop: the rising “oh-oh-oh-OH-OHH! oh-oh-oh-OH-OHH!” that leads off the song and caps each chorus.

This is also Bieber’s second straight single, after “What Do You Mean?”, to be on-trend with the sound of “tropical house.” That’s the ambiguously Latin-flavored, reduced-beats-per-minute chillout club sound that, according to premier dance music critic Michaelangelo Matos, only began to take the EDM-festival world by storm in late 2014. Bieber’s two No. 1 hits, coming directly on the heels of 2015 Song of Summer “Cheerleader” by OMI, have decoded tropical house for the radio-consuming masses. “Sorry” is the most Latin-flavored of Bieber’s hits yet—cowriters Julia Michaels and Justin Tranter added extra syllables into the verses (“You gotta go and get angry at all of my honesty”; “I’ll take every single piece of the blame if you want me to”) just to maintain a salsa-like cadence. This sound helps keep Bieber’s “Sorry” exceptional in its fleet-footedness, unlike so many other big hits themed around apology—whether by Brenda Lee, Elton John, or John Denver—which are often mawkish, mournful, even bitter.

By the way, the person most likely to eject Bieber from the Hot 100’s top slot is … Bieber. As previously noted, his “Love Yourself” has been lodged in the Top Five for most of the last two months, and it’s already the country’s best-selling digital song. (“Sorry” is No. 1 overall on the Hot 100 thanks to stronger airplay and streaming numbers.) So I may be back here shortly to talk about our nation’s favorite manchild once again. Frankly, it will be with less joy—unlike the big-hearted “Sorry,” “Love Yourself” is a small-minded, fairly nasty kiss-off to a paramour, disguised as a love song. Perhaps Team Bieber should get cracking on writing another apology song now.